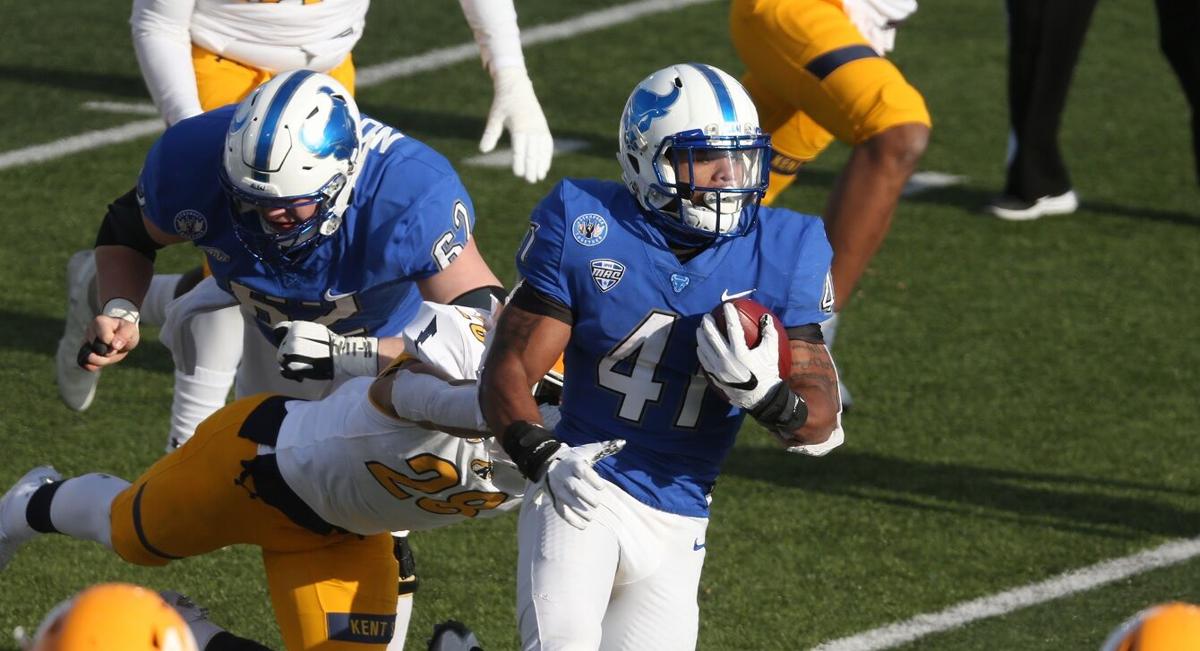 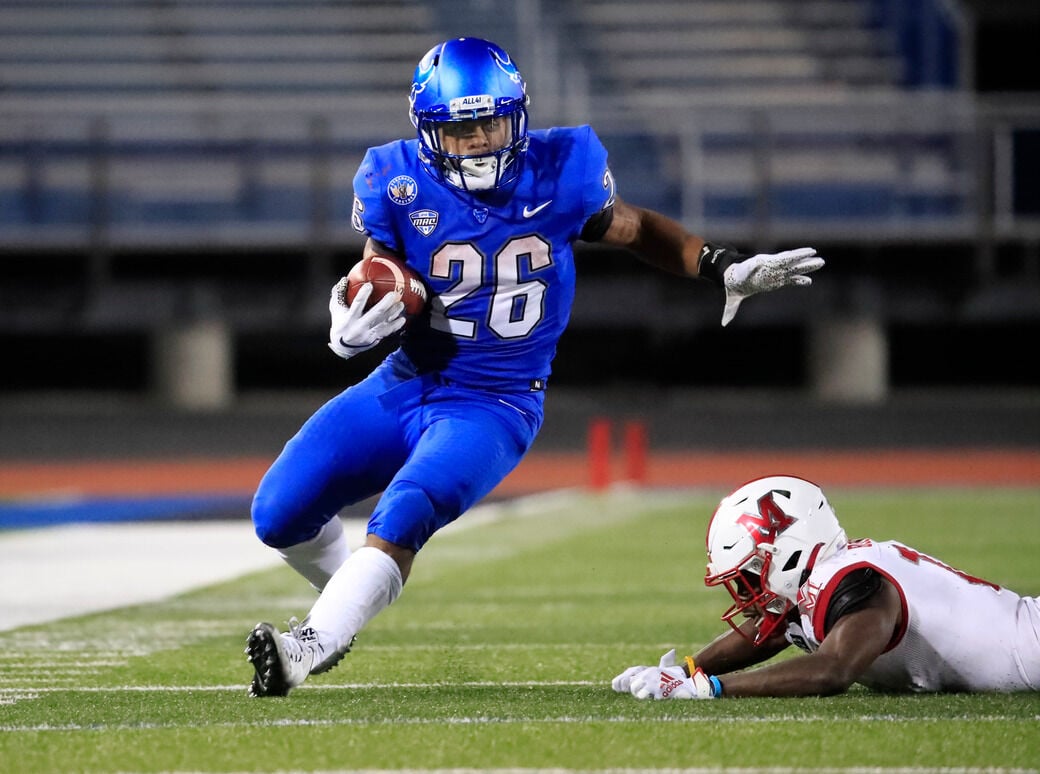 University at Buffalo running back Jaret Patterson rushes against Miami (Ohio) on Nov. 10.

Time and strength, clearly, are on Patterson’s side right now, 31 games into his time with the University at Buffalo football program. Saturday at UB Stadium, the junior running back found a purposeful and productive stride, running for 409 yards and eight touchdowns in a 70-41 win against Kent State.

Simply put, Patterson was on a tear.

“It’s, honestly, shocking,” UB left tackle Kayode Awosika said of watching Patterson trample defenses each week. “It amazes me how much he turns it up as the game goes. When other people are getting tired, he’s getting more and more intense.

“It's just amazing how he can do what he does, on a daily basis, in practice and in games. Him and (Kevin) Marks, they’re both amazing backs that make it easy for us.”

Patterson doesn’t intend on stopping, either.

“I put myself through a lot of pain to try to get results like that, and it’s great for my mindset,” said Patterson, who also became the first FBS back this season to run for at least 300 yards in back-to-back games this season. “But I really can’t reflect because we have two games left.”

The Bulls earned a win that could have championship-game ramifications. UB (4-0 MAC) took sole possession of first place in the MAC East Division, and the Bulls have two games left: 3:30 p.m. Dec. 5 at Ohio and Dec. 12 against Akron at UB Stadium.

The East Division winner earns an automatic berth into the MAC championship game, which is scheduled for 7:30 p.m. Dec. 18 at Ford Field in Detroit.

“Our ultimate goal is to go to Detroit and I won’t stop,” Patterson said. “I won’t stop working. I won’t stop until we get there and win it.”

Patterson’s first touchdown, a 3-yard run 43 seconds into the game, gave UB a 7-0 lead against the Golden Flashes (3-1). He scored his second touchdown, a 31-yard run, less than four minutes later.

Patterson ran for 101 yards and two touchdowns on four carries in the first five minutes against Kent State. At halftime, he had 267 yards and five touchdowns on 18 carries, as UB took a 35-24 lead.

Somewhere in there, Kent State found ways to keep up with the Bulls. The Golden Flashes erased a 14-3 deficit, then came within four points of the Bulls three times in the first half – at 14-10 on Dustin Crum’s 3-yard touchdown pass to Kris Leach with 3:04 left in the first quarter, at 21-17 less than five minutes into the second on Crum’s 42-yard touchdown pass to Isaiah McKoy and at 28-24 with 6:29 left in the half on Crum’s 20-yard run.

Each time, Patterson answered with a touchdown, including a 1-yard run that gave the Bulls an 11-point halftime lead.

Patterson capped off the game with a pair of fourth-quarter touchdowns, including a 58-yard run with 7:44 left.

UB finished with a program-record of 515 rushing yards in a game, and Patterson has 920 rushing yards and 16 touchdowns in four games. As another record-setting day closed for Patterson, UB coach Lance Leipold said he was unaware of the running back’s torrid pace on Saturday.

It wasn’t until he walked off the field and onto the track that surrounds UB’s football field, he said, that he found out exactly what Patterson had accomplished, and what the rest of the college football world was buzzing about.

“I did not know any of that,” Leipold said. “I didn’t know. When you start talking about, and another big ballgame next week, I think eight touchdowns is enough that we’re going to give him the ball. I didn’t know he had eight. I didn’t even know we had 10 rushing touchdowns. When we score, we start thinking about, ‘how can we slow them down?’

“But for the eight touchdowns and the 400 yards and how close he was to the national record? I wish I would have known, a little bit.”

Everyone from fans to draft analysts and national media and even a WWE superstar who is in the Kent State athletics hall of fame were impressed.

Column: With Jaret Patterson leading the way, UB is rushing to unthinkable heights

"The last time the Bulls scored as many as 70 points in a game? It was an 81-0 win over Hobart in 1918. In the middle of the Spanish flu epidemic. Must be something about pandemic years."

The University at Buffalo football team moved closer to a national ranking Sunday in the Associated Press Top 25, with 56 points, good for second among the teams also receiving votes.

UB's Jaret Patterson: 'I’m going to get it done and help this team to where it needs to be.'

UB is poised to clinch its second MAC East Division and can also can lock up the program’s third berth in the MAC championship game.

The year in sports: The pandemic caused a pause and then the games returned

The first thing we'll remember about 2020 in sports is the silence. From mid-March until July, the games were stopped because of Covid-19.

Jaret Patterson will always have a foot – or at least a pair of cleats – on the ground with the University at Buffalo football program.

Buffalo Bulls running back Jaret Petterson scored 8 touchdowns and rushed for 409 yards during a 70-41 victory over Kent State on Saturday, No…

University at Buffalo running back Jaret Patterson rushes against Miami (Ohio) on Nov. 10.