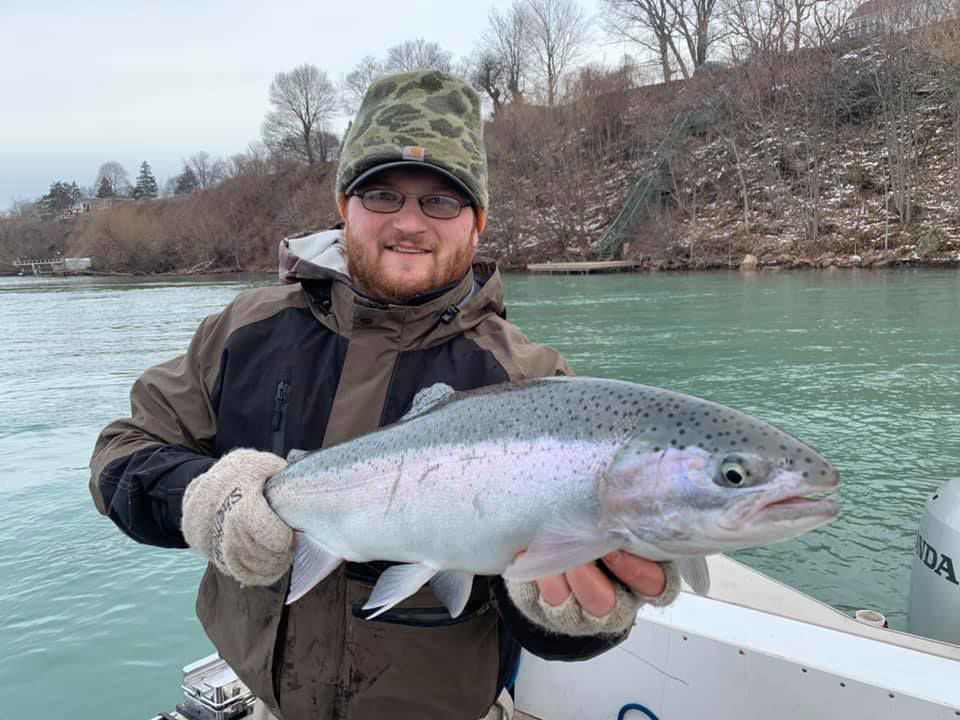 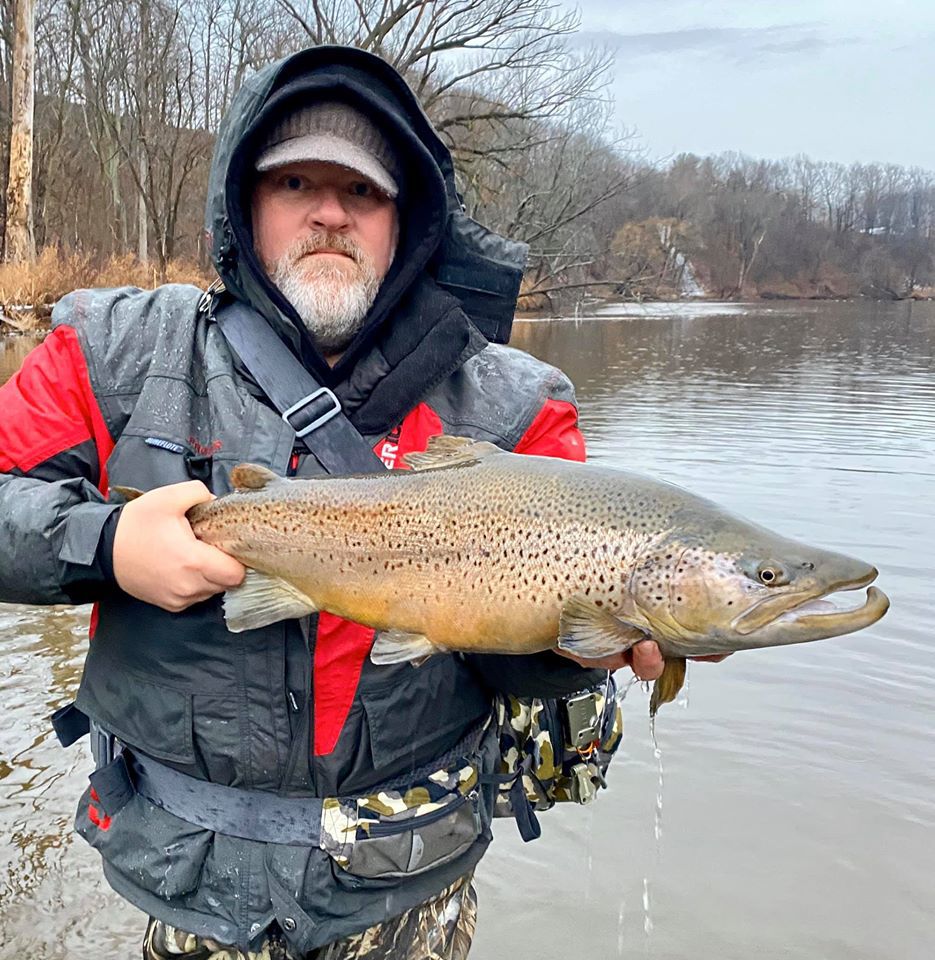 The roller-coaster ride of temperatures and wind this winter is a hit-or-miss proposition when it comes to fishing fun. Mild wind and weather this week should be good for the Great Lakes tributaries and the Niagara River. You might even be able to find some ice fishing.

Lake Erie tributaries have been fishing great when the flows and color have been good, insists Ellicottville guide Nicholas Sagnibene of Adventure Bound on the Fly. Weather has kept the rivers up with the occasional blow out, bringing in fresh fish regularly. Drifting egg patterns and nymphs are normally the most productive method according to Sagnibene but drifting or swinging buggers or flesh flies can be productive in high pressured streams, where the fish are seeing a lot of eggs and nymphs. Don’t be afraid to mix it up a little and move away from easy access.

It has been a great winter for inland trout fishing according to Adventure Bound on the Fly's Sagnibene. The fluctuation of temperatures and precipitation has kept the streams full with nice winter levels and color stream depending. Water conditions should remain good all week. If fishing some colored water, try wooly buggers or streamer patterns in a variety of colors. Sometimes baitfish take on a pale hue in winter, so white is never a bad option. Make sure you’re breaking the surface of the water and getting into the strike zone as the water is cold and fish are sluggish. General nymph patterns in size 14/16/18 pheasant tails, copper johns or prince nymph variations have been working well for Sagnibene. Winter fishing is about getting the flies down into the feeding zone. If your flies are unweighted, add some split shot or a heavier fly to get down.

Capt. John Oravec with Troutman reported that he had action all day last Thursday and Friday. On Thursday, the action was on 29-inch to 34-inch lake trout. He did well on the Niagara Bar the tail end of last week in 27 feet with live bait fished off three-way rigs. On Friday, it was brown trout and steelhead. He also caught a big 12½-pound brown with an emerald shiner. The weekend winds mess things up again, but it looks like conditions will be good by Wednesday to move forward with boating options. For the shore in the gorge area, Mike Rzucidlo of Niagara Falls was hitting some nice steelhead using No. 4 spinners.

Joel Juhasz of Lancaster is the leader in the Capt. Bob’s Outdoors Winter Contest for the steelhead division with a 31.5-inch lower river fish caught on a pink egg sac. In the upper Niagara River, lake trout and walleye were cooperating for anglers using jigs or live bait. California Joe Pavalonis of Buffalo is again atop the leaderboard in the contest with a 17¾-inch upper river rudd taken on a crappie jig. He caught a northern pike that is the leader while fishing for rudd on a crappie jig, a 31.5-inch fish from the upper river.

Conditions have been rough according to Greg Schloerb of Amherst. Water was high and stained this past weekend. Fishing has been slow. He did manage to catch both browns and steelhead using jigs tipped with wax worms this past weekend. Meanwhile, Scott Feltrinelli of Ontario Fly Outfitters found a few steelhead in small tributaries on Monday. Conditions were good in the smaller streams. High water has been dropping and clearing after this most recent melt off. Feltrinelli’s fish took a large brown and orange streamer fly. Many medium creeks were fishing well. Bigger creeks should be clearing and fishing decent over the next few days. The south end of Sodus Bay was reporting 5 to 6 inches of ice according to Chris Kenyon with Wayne County Tourism. Perch action is decent. Some pike are being caught near Leroy Island. Over in Chaumont Bay, Bobby Joe Frost of Alden, Steve Ball of Alden and Tim Himan of Attica teamed up to catch 210 pounds of perch, a walleye and a northern pike over three days. It was mostly 5 inches of ice but where there was snow the ice was not as safe. Caution was advised.

Some guys were on the ice last weekend and they were catching walleyes around Long Point. Only 2 to 3 inches of ice was being reported according to Mike Sperry at Chautauqua Reel Outdoors. The rain didn’t help late Friday and Saturday but the lake is still iced over. Not many anglers are out now. We should have some decent ice by Thursday. It looks like a few cold nights this week will help.

Despite some ridiculously frustrating warm weather recently, many of the nearshore areas that normally hold yellow perch have remained fishable in most of the shallower areas, reports Wil Wegman of Lake Simcoe. Good catches of Simcoe’s famed jumbos have been caught, especially by those willing to work hard and practice mobile fishing while looking for the bigger perch that often roam away from the smaller perch. Wegman notes that lake trout and whitefish opportunities have been far less prevalent despite some anglers taking dangerous risks by venturing out on ice less than the 4 inches required for safe walking. Don’t take chances. Wegman will be the featured speaker for the Southtowns Walleye monthly meeting March 19 in Hamburg. Bob Rustowicz took over the early lead in the Capt. Bob’s Outdoors perch division while fishing at Simcoe with a 13.5-inch fish.

Other Capt. Bob’s Outdoors leaders are Bobby Joe Frost of Alden with an 8-inch bluegill from Black Lake and Steve Guziejka of Clarence with a 14.5-inch crappie taken from an area pond.

"The fans and how much noise they made today, even at 6,700, I guess, was the number, incredible, man," Bills coach Sean McDermott said.

The Buffalo Bills will host the Baltimore Ravens on Saturday in an AFC divisional playoff game at Bills Stadium. Kickoff is scheduled for 8:15 p.m. on NBC.

Here is what the Sabres could look like in the season opener Thursday against the Washington Capitals in KeyBank Center.

Zack Moss is out for the postseason, the Houston Texans are interested in interviewing Leslie Frazier, Cole Beasley feels "good enough" and more from the Bills Monday media call.

Of course. No one in life has all the answers, but Alex Trebek had them all in the form of a question, writes Erik Brady.

Josh Allen has been sensational against the blitz this season. Don’t expect that to deter the Ravens’ defense in Saturday’s game.

"On Saturday, Allen showed the necessary poise that allowed the Bills to not let the game slip away," writes Vic Carucci.

Diggs, the NFL's leading receiver, wanted to get the fans in on the action and was playing catch with several fans in the 100 level near the end zone during warmups.

Vic Carucci: After Josh Allen, who else steps up for the Bills?

The questions only intensify as the Bills move a step closer to their first Super Bowl appearance since the 1993 season, the last of four straight trips to the big game, writes Vic Carucci.

What Bills fans should know about the Baltimore Ravens

What Bills fans should know about the Baltimore Ravens