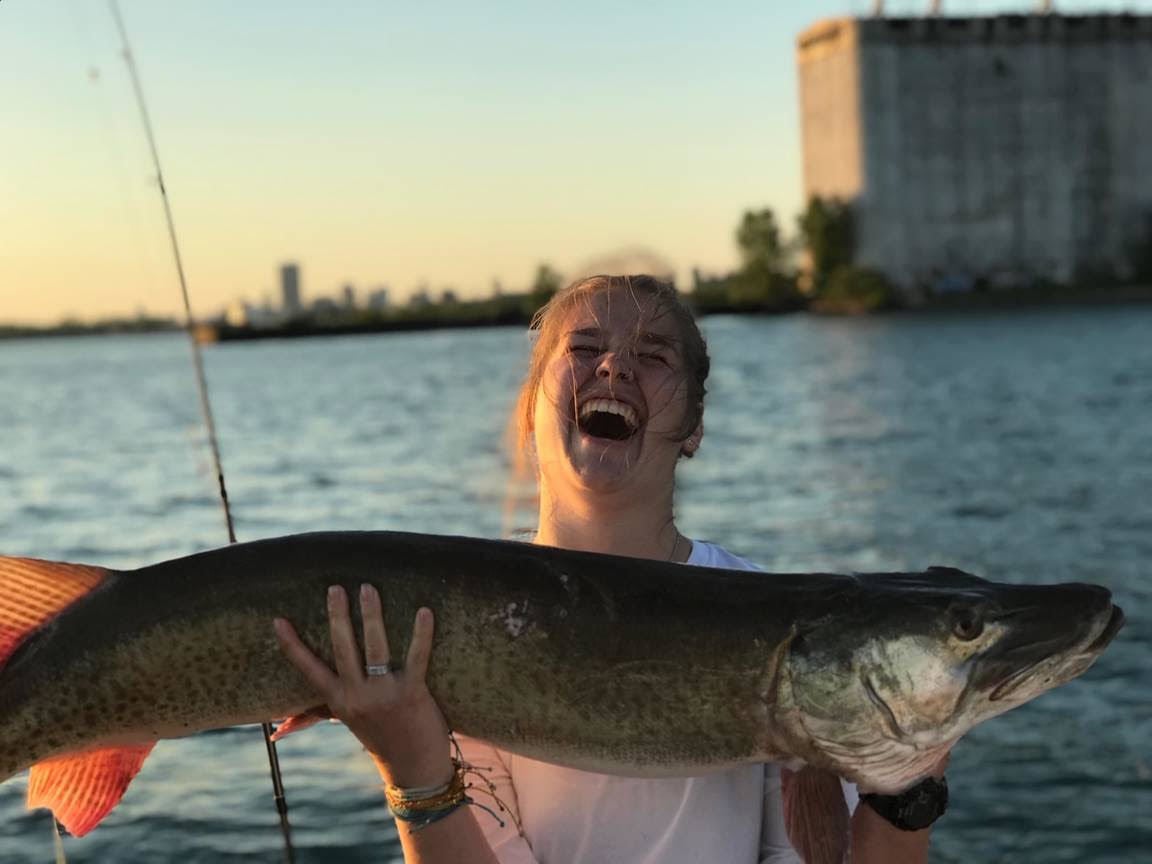 Hannah Spitzer of Clarence holds up this 50-inch musky from Buffalo Harbor, her first ever. She was fishing with her boyfriend Matt Tollner of Grand Island, trolling worm harnesses for walleye. (Photo courtesy of Matt Tollner) 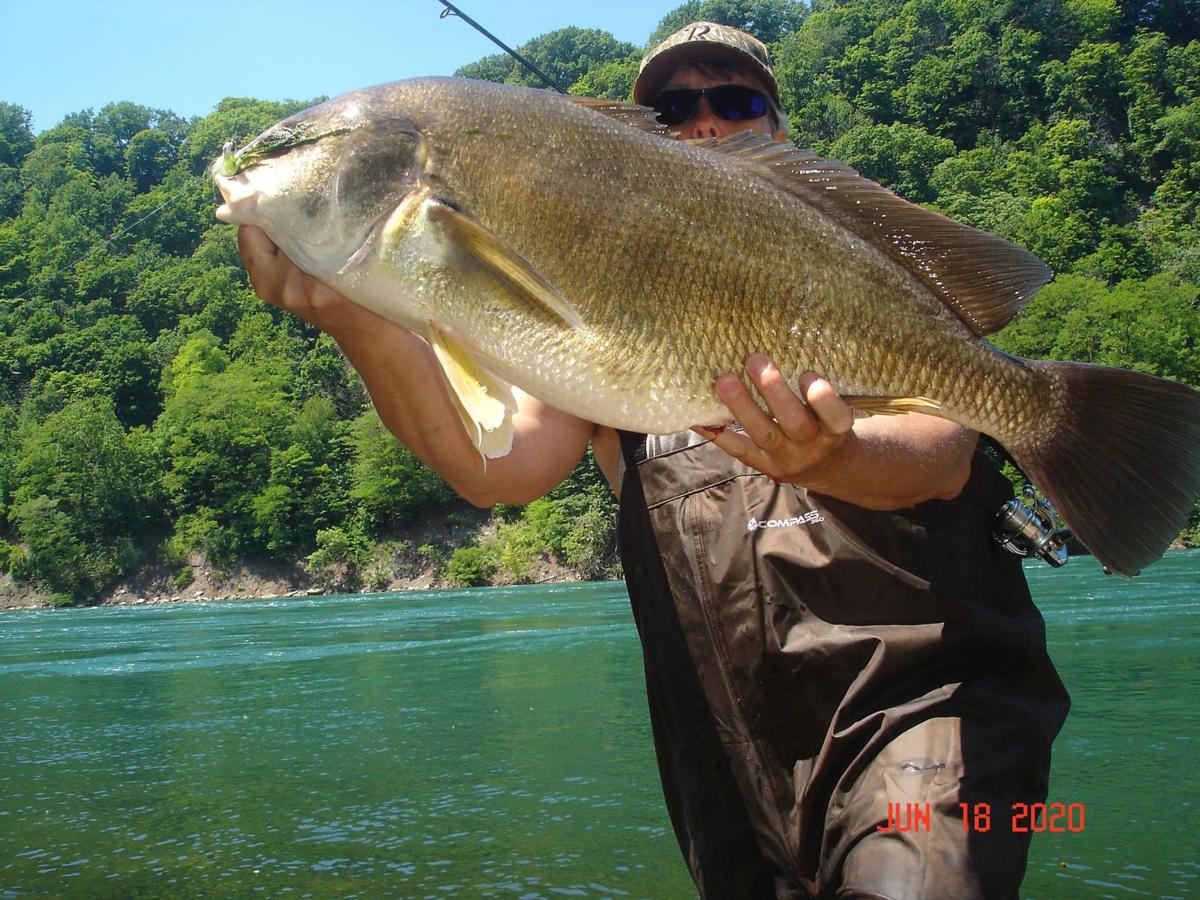 Mike Rzucidlo of Niagara Falls has been catching some huge freshwater drum in the lower Niagara River. (Photo courtesy of Mike Rzucidlo) 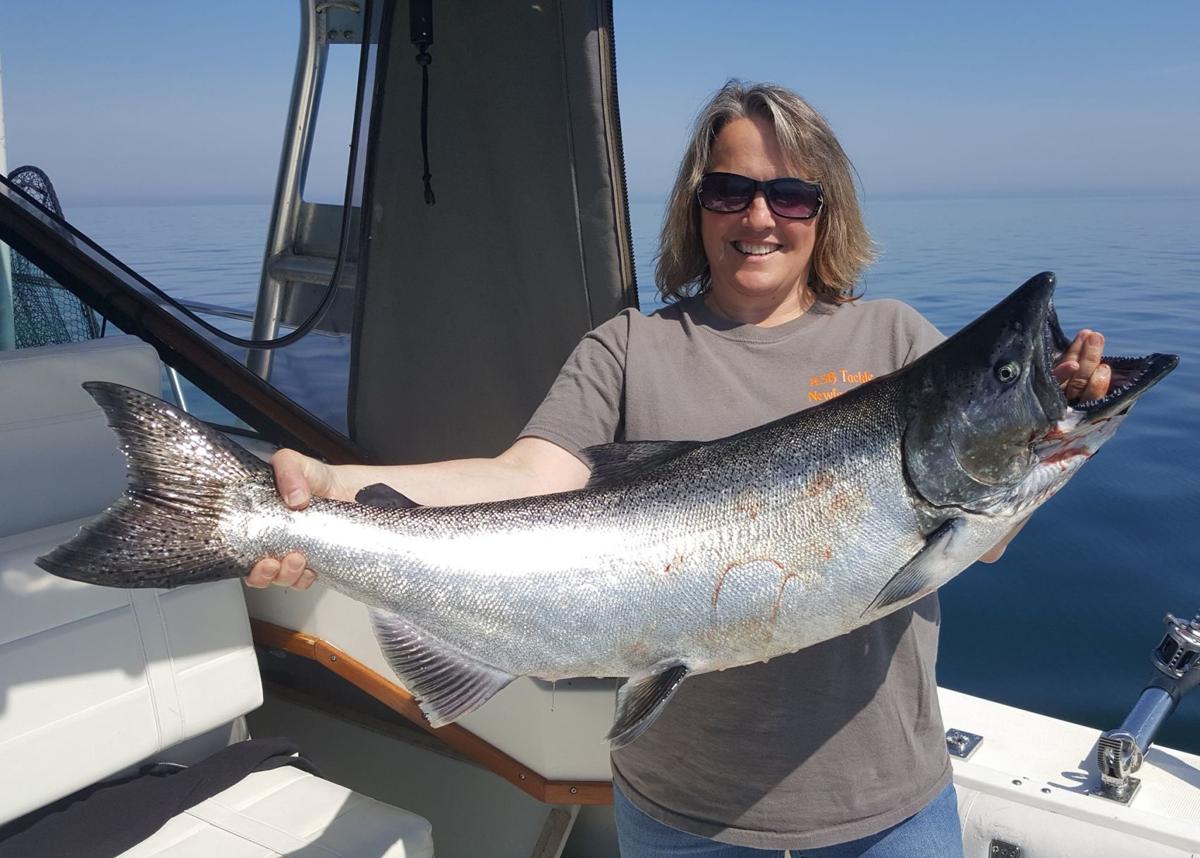 Michelle Petersen of Smicksburg, Pa. caught this 24-pound salmon while fishing out of Olcott over the weekend. (Photo courtesy of Roy Letcher)

The Lake Ontario Counties Summer Derby starts Saturday and it is a Free Fishing weekend throughout New York State. Take a friend or relative fishing.

The offshore walleye bite is in full swing with impressive size class of fish being found from Buffalo to Barcelona, according to Capt. Don Ruppert of Wave Tamer Charters.

"It's exciting to see not only a great quantity, but great quality within our walleye fishery this year," Ruppert reports.

Finding cooperative water temperatures is important to finding the active fish. Once they are located, lead core and dipsy diver presentations are extremely productive. For tackle selection, they have seen the bite work with Renosky and Yaleye stick baits one day and worm harnesses the next. It's worth carrying night crawlers, even if it's not your go-to presentation; walleyes have been that selective this year. Ruppert’s best bite has been in 45-to-55 feet of water. Their lure presentations are generally right in the middle of the water column. The class of fish this year is impressive and just in time as the Sunset Bay Walleye Shootout is on July 18. For interested teams, please contact Ruppert via text at 435-4137.

Nate Diegelman reports there seem to be scattered but good numbers of walleye behind the windmills in 40-plus feet of water. He caught a limit in a couple hours one night last week trolling harnesses about 25 feet down. It looked like a thermocline had set up at that depth, and they were hanging around in it. Bass action has picked up, according to Capt. Ryan Shea of the Brookdog Fishing Company. Using ned rigs, the lake fished well from Myers to Woodlawn as he concentrated on rock piles and tight stacked gradient lines at depths from the upper 20s to the 30s. For those wondering about the Southtowns Walleye derby that ended Sunday, club officials are in the process of polygraphing winners and verifying results.

Action in the river is still hampered by moss, but it appears to be clearing up, according to reports. The NYPA platform was closed some mornings but opened later when water levels came down. Before you head down, call the number at 286-6662 to see if it is open. Lisa Drabczyk with Creek Road Bait and Tackle reports that anglers have been catching rock bass, smallmouth bass and a few steelhead off the platform using minnows. A bit down river from shore, Mike Rzucidlo and Mike Ziehm of Niagara Falls have been hitting a mixed bag of fish on jigs. Carp to 16 pounds, sheepshead to 15 pounds, white bass to 3 pounds and some chunky smallmouth bass all from the same water. Bass fishing has been working for a few boaters along the Youngstown drifts and out in the lake around the green buoy using ned rigs, swim baits and tubes. However, with the opening of the regular bass season last Saturday, live bait can be used, so try crayfish or minnows. Bass are starting to turn on in the upper river, too. Ned rigs have been hot there as well. We must reiterate the importance of staying in New York waters due to the boundary restrictions in place from Canada.

Fishing action in Lake Ontario is starting to pick up again, according to Roy Letcher of Newfane. Trollers are catching a mixed bag of steelhead, coho salmon and kings from 80 to 440 feet of water. Put your spoons, flies and meat rigs down 30 to 80 feet. Michelle Peterson of Smicksburg, Pa., caught a 24-pound king this week aboard the Hotline while fishing out of Olcott with Letcher and her husband, Dave Petersen. Karen Evarts at The Boat Doctors reports that hot spoons have been bright colors and glows, with oranges, caramels and dotted baits leading the way. When those slow down, meat rigs are picking up the slack. This is perfect timing for the LOC Derby that begins June 27, offering a $10,000 grand prize for the largest salmon in the month-long contest. Check out www.loc.org for details, registration points and weigh stations. Four categories include salmon, brown trout, lake trout and walleye. Wade Rowcliffe of Rochester reports that he had some good action over the weekend off Point Breeze in Orleans County fishing with his brother, Vic. While most boats were heading to deeper waters, they stayed closer to home as they fished the 85-to-120 feet of water range all day. They saw a decent amount of bait marks and the water temps looked good. They had bites on just about everything. They found fish a bit higher with numerous slider bites off the riggers. A couple of mature kings were caught on dipsy divers. They had one or two bites on the lead-core, weighted-line setups. They caught most of their fish in the 40- to 50-foot range below the surface. They did get two bites near the bottom, too. Best lures were green glow flasher with the green glow fly, the UV green gator stingray and the NK 28 spook, NK 28 Wahoo, and the NK 28 and Capt. John Oravec's UV O-frog special. Eighteen Mile Creek has been producing a mix of bass, pike, panfish and carp all the way out to the pier. The same is being reported over in Wilson to the west and the Oak Orchard River to the east.

At age 60 and after three years out of the limelight, Lindy Ruff has landed another NHL head coaching job.

PSE makes a pair of additions to senior leadership team

Matt Barkley has rarely had the chance to stay very long in one place during an eight-year NFL career with six teams.

Hannah Spitzer of Clarence holds up this 50-inch musky from Buffalo Harbor, her first ever. She was fishing with her boyfriend Matt Tollner of Grand Island, trolling worm harnesses for walleye. (Photo courtesy of Matt Tollner)

Mike Rzucidlo of Niagara Falls has been catching some huge freshwater drum in the lower Niagara River. (Photo courtesy of Mike Rzucidlo)

Michelle Petersen of Smicksburg, Pa. caught this 24-pound salmon while fishing out of Olcott over the weekend. (Photo courtesy of Roy Letcher)