The University at Buffalo women's soccer team did nearly everything in its power to secure a chance to play for the Mid-American Conference championship – but ultimately, Shawn Burke's team will be left stranded as Bowling Green, on Covid-19 pause since March 29, will face West Division winner Ball State next weekend for a berth in the NCAA Tournament.

Regardless of their participation in this truncated season, current soccer players across all NCAA divisions can sign a waiver to receive an extra year of eligibility.

The Bulls, with arguably the most talented and deepest roster since the school's NCAA Tournament appearance in 2014, beat defending champion Bowling Green in the regular season, won the most matches of any team in the East Division and, in the mind of Burke and the UB's athletics administration, at least deserve the chance to play a makeup game for a crucial match postponed due to Covid-19 precautions.

Given the Bulls' 6-1-1 MAC record and Bowling Green's 5-1 mark, it would be logical for the two East contenders to make up the April 4 postponement, which wasn't played because Covid-19 protocols and contract tracing ground the Falcons' season to a halt from March 29 through April 11. If that game were to be rescheduled, as the conference mentioned would be attempted several times in statements, then a UB win would propel them ahead of Bowling Green in win percentage.

"We might lose! We don't know. But to not be giving these athletes the chance ... ," Burke said, before trailing off in frustration. "Kids come here for an opportunity to play in the NCAA Tournament."

Responding to an appeal made by Burke and the UB sports administration late last week, the Mid-American Conference decided Thursday it would stand by the Covid-19 bylaws determined before the season by a cast of head coaches, school administrators and MAC officials and would not deviate from those.

Two dates – April 14 and 15 – are open for theoretical makeup matches before the April 17 conference championship, but this is where a bylaw typo plays a role. Burke explained that last fall he was part of a committee, composed of MAC women's head coaches and school administrators – overseen by the MAC Coordinating Committee – formed to consider Covid-19 season hypotheticals. There was a collective agreement, Burke said, to make the week between the end of the regular season and the conference final open for makeup games. That determination, Burke said, was misprinted in the season bylaws as April 7-11, not April 14-15 – which the conference pointed to after hearing Burke's appeal.

"They're standing by, as a conference, that no other sport made games up after their last scheduled game," Burke explained.

The notion that April 7-11 would have been a suitable window to make up games isn't legitimate; UB has had league matches scheduled for April 8 and April 11 since schedules were released.

Burke's chief complaint is the lack of flexibility from the conference in ensuring the best team from the East Division is represented. The seventh-year UB head coach mentioned the committee's emphasis on having "fluidity and flexibility" ahead of a season of uncertainty.

"I just can't believe in a Covid season ... there's an opportunity for common sense to prevail, and we're not letting the players decide."

Burke said his program had not heard from the Mid-American Conference regarding any makeup matches, even though every MAC news article regarding postponements said the conference office would "look to reschedule matches at a later date."

Mid-American Conference communications director Eric Kwiatkowski could not be reached Saturday or Sunday for comment. The postseason schedule on the conference's website is not coherent.

UB captain Marcy Barberic, the team's leading scorer, noted the frustration she and her teammates shared regarding the conference's inflexibility in rescheduling postponed matches, but she also pointed to the MAC's decision to eliminate the conference tournament for the next four years; previously, the top four teams in each division advanced to an eight-team tournament. In 2021, only the division winners play a postseason game.

"A MAC tournament will solve 99% of the problems that have risen because of this," Barberic wrote in a statement. "(The tournament) was also taken away not only from us, but every other women’s soccer team in this conference."

Burke was emphatic that he believed Bowling Green's Covid-19 pause to be genuine and that the Falcons "weren't trying to pull anything." The Falcons did meet the minimum of six games played to qualify for the postseason, and their pause concludes before the final.

Mike Cihon, Bowling Green's assistant director for athletic communications, issued the following statement: "I don’t honestly know if there have or have not been discussions among BGSU, the conference office and the other teams involved re: rescheduling the games that were postponed."

A complicating factor is the sheer number of postponements that have occurred and determining the order in which they ought to be rescheduled. Burke believes the matches with the most meaning should take priority, while a counterargument would be rescheduling in the order in which the matches were canceled. That would at least force Bowling Green to beat Akron after more than two weeks on pause, while UB would face Kent State.

The Bulls had already experienced frustration regarding Covid-19's effects on player availability, connected to whether or not games would be played or postponed. UB opted to play against Kent State in the season opener March 4 without three starters, who were out due to Covid-19 contact tracing. The Bulls' 1-0 loss to the Golden Flashes was the only defeat Burke's team suffered all year.

In a sense, Burke knew before the season that there was a chance a team would feel shorted by the end of the campaign.

"I remember saying, 'Listen, there's no right or wrong way how to figure teams out at not the same amount of games ... there's a good chance that a team is going to get screwed.' That's an exact quote."

So what's preventing the University at Buffalo women's team from traveling to Ohio on April 15 for a clash vs. Bowling Green to determine the best representative of the East Division in the Mid-American Conference championship? In Burke's mind, it's the MAC administration's lack of flexibility and lack of interest in scheduling makeup games.

"I don't understand why you wouldn't want the two best teams to just get an opportunity to play," Burke said. 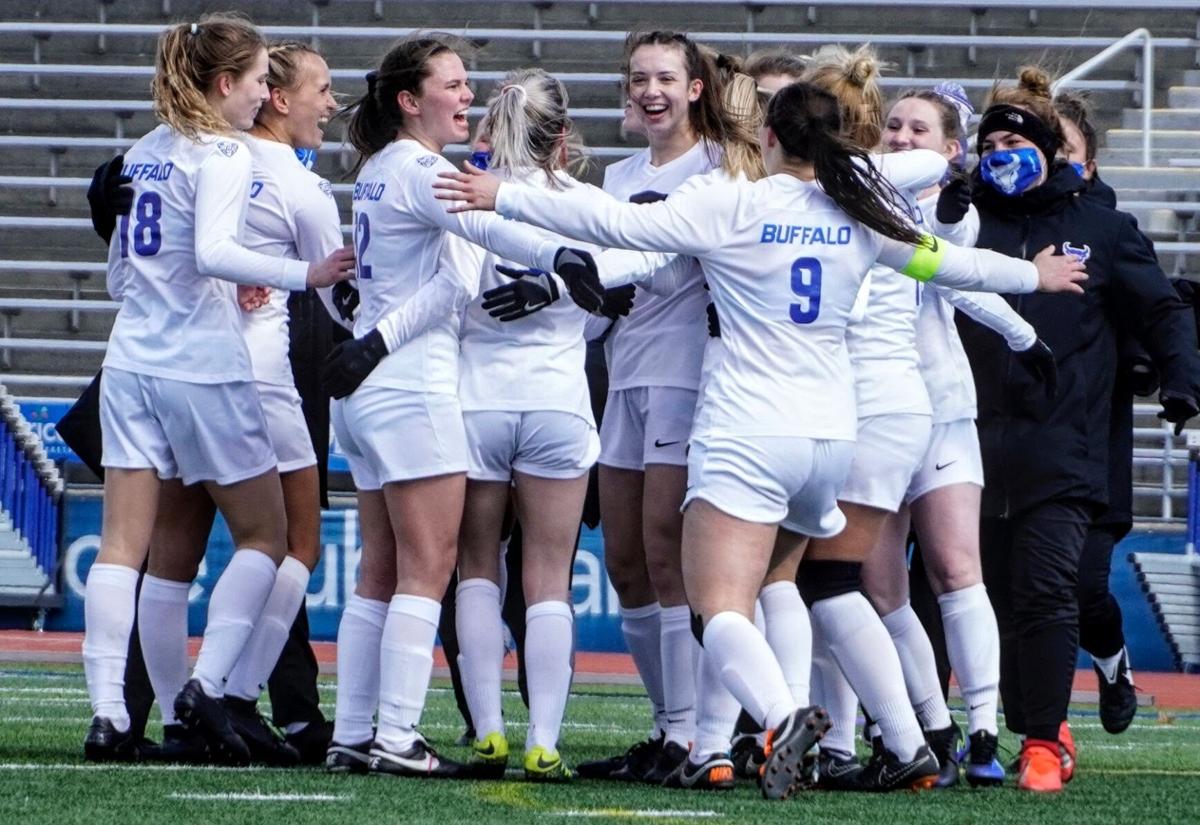 UB women's soccer believes it deserves a shot to makeup a game canceled due to Covid-19 for a chance to represent the MAC's East Division in the conference final. 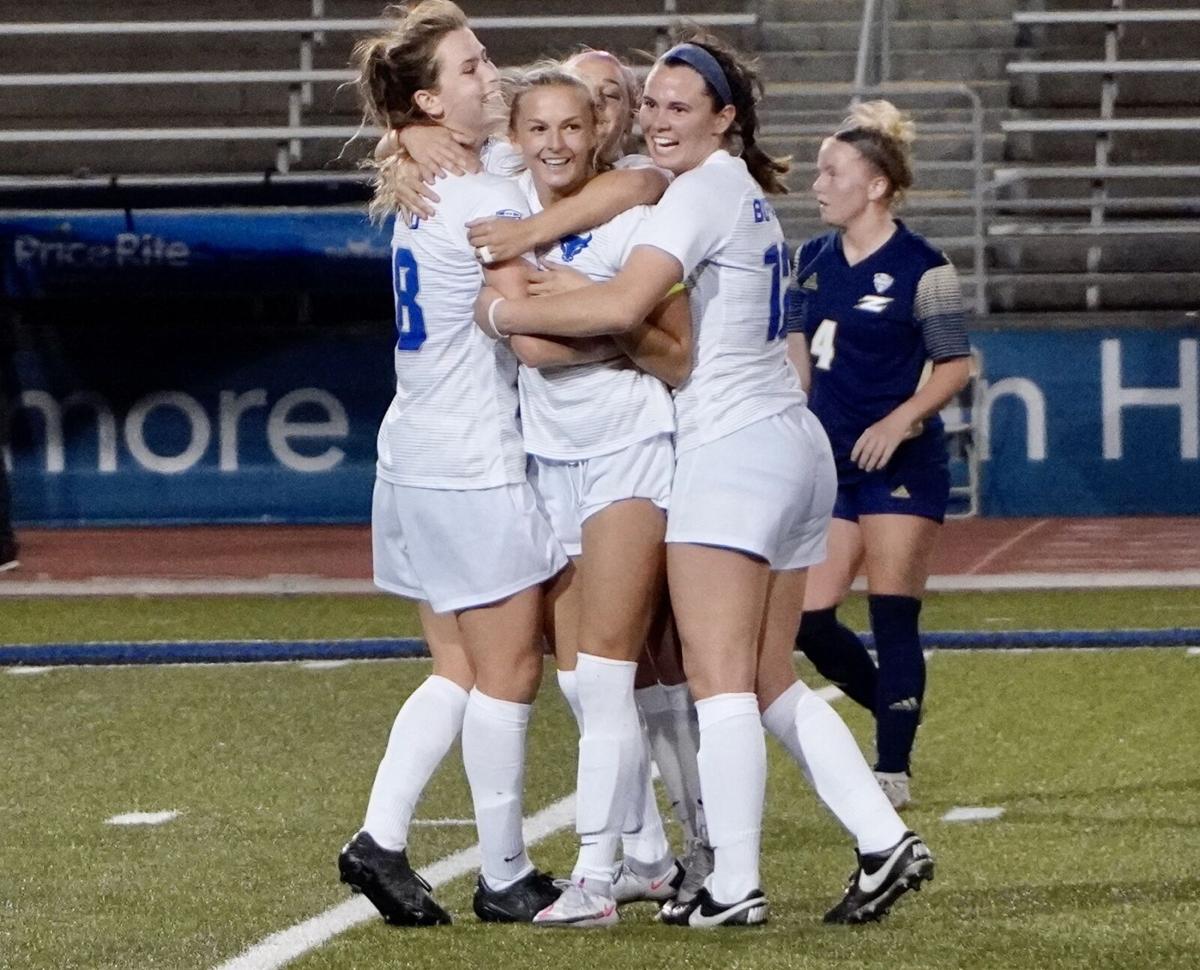 Marcy Barberic, middle, celebrates after scoring on a penalty kick on Senior Night vs. Akron. 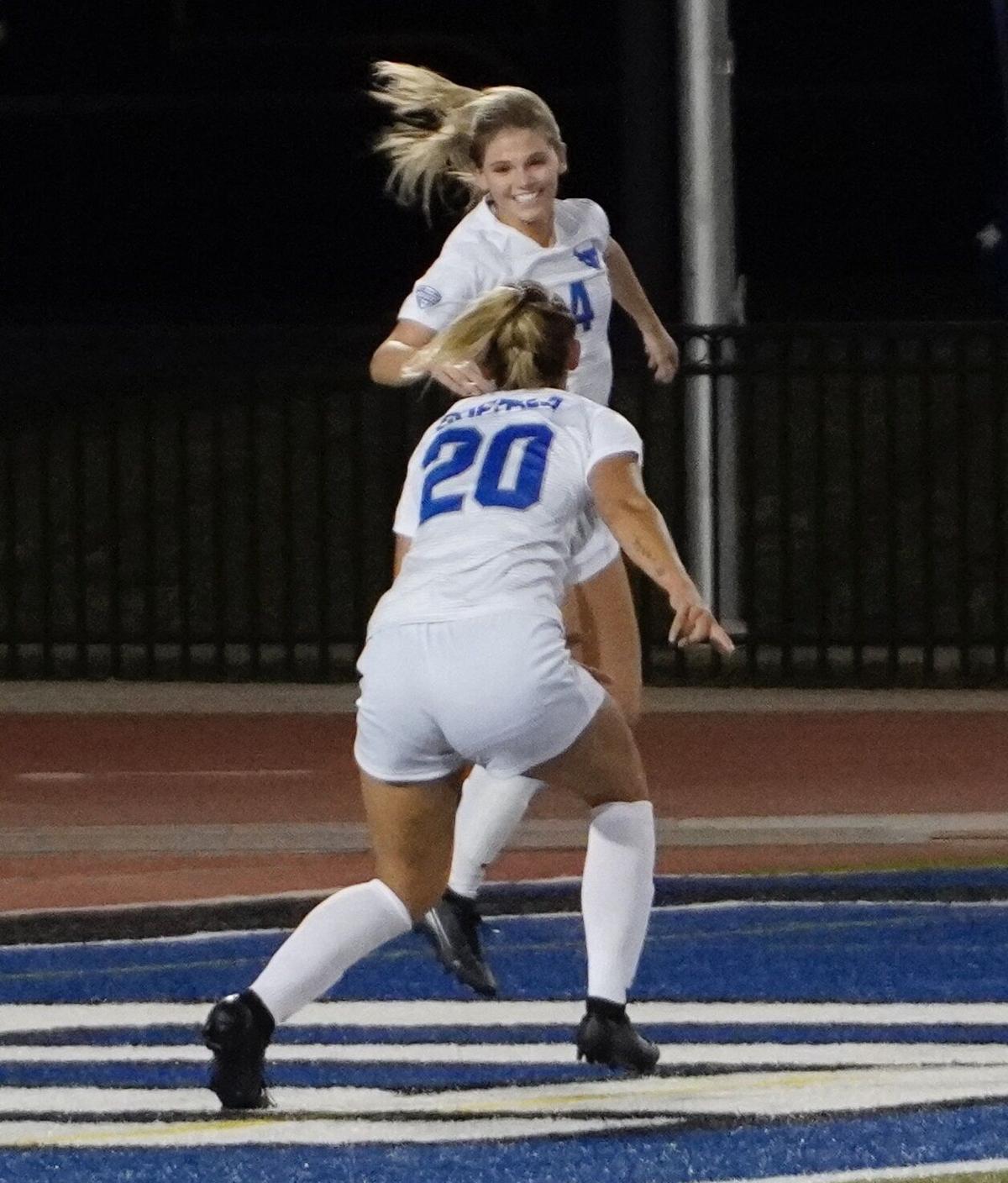 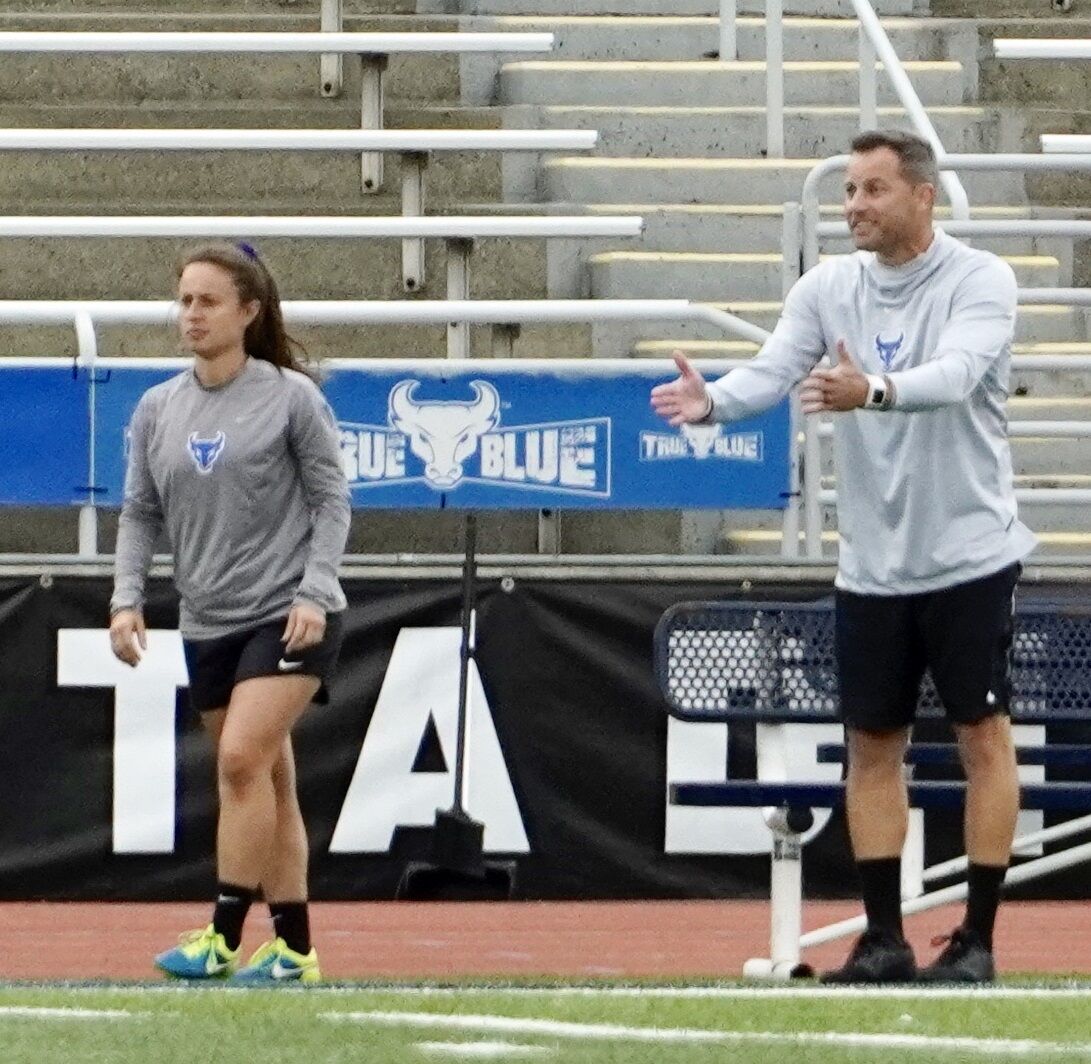 Shawn Burke, right, is frustrated by the MAC's inflexibility during a season hampered by Covid-19.