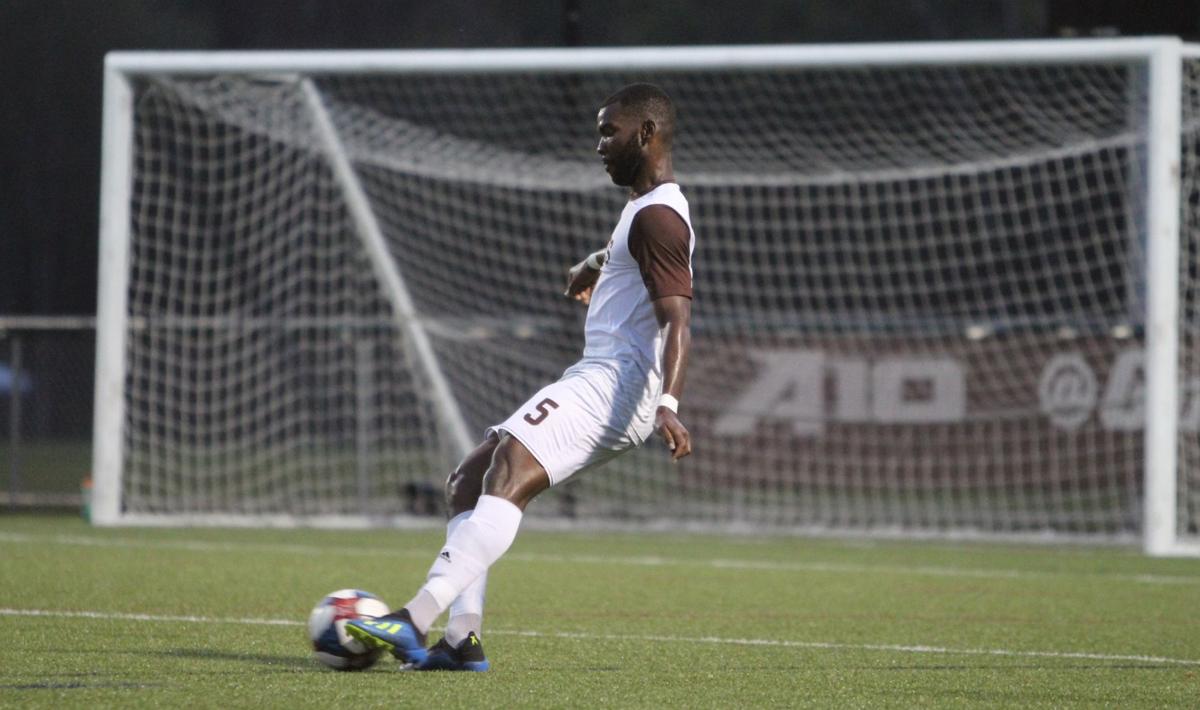 Jaaziel Thompson, who wound up in Olean to play soccer by way of Jamaica and Iowa, has made his mark for the Bonnies and reconnected with his family, too. (Photo courtesy of St. Bonaventure Athletics) 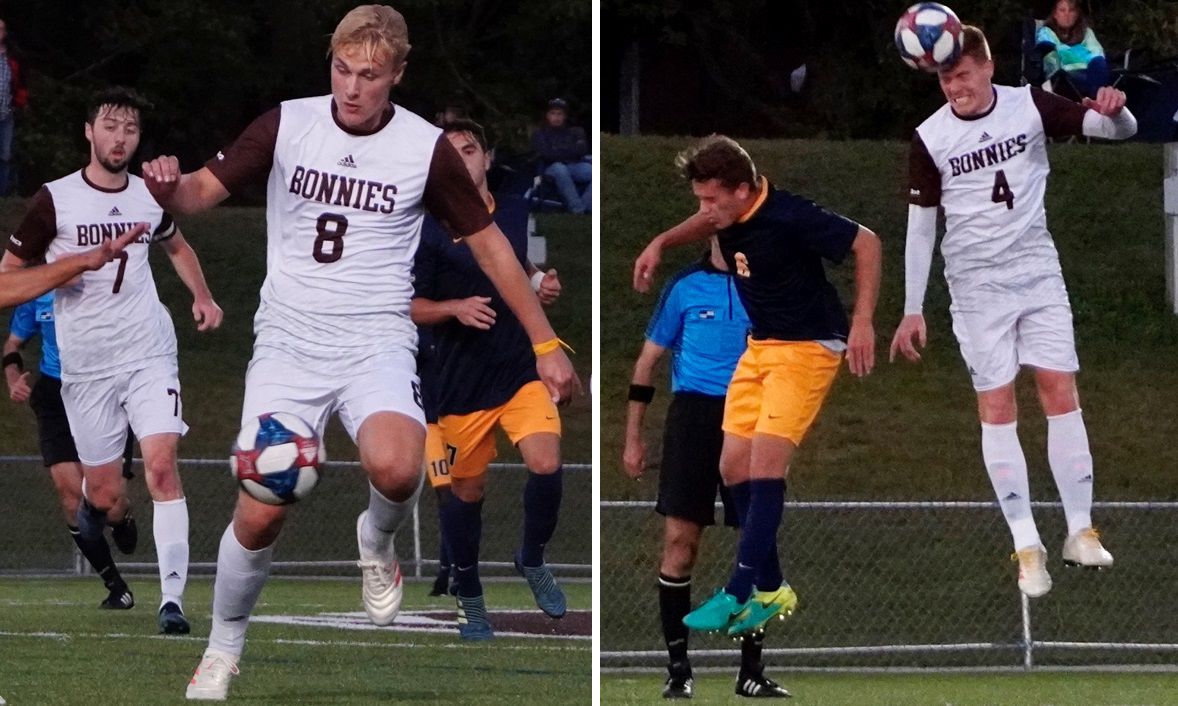 Fredrik Hansen, No. 8 in white, and Francesco Caorsi, No. 4 in white, will have major roles over the next two years for St. Bonaventure. (Ben Tsujimoto/Buffalo News) 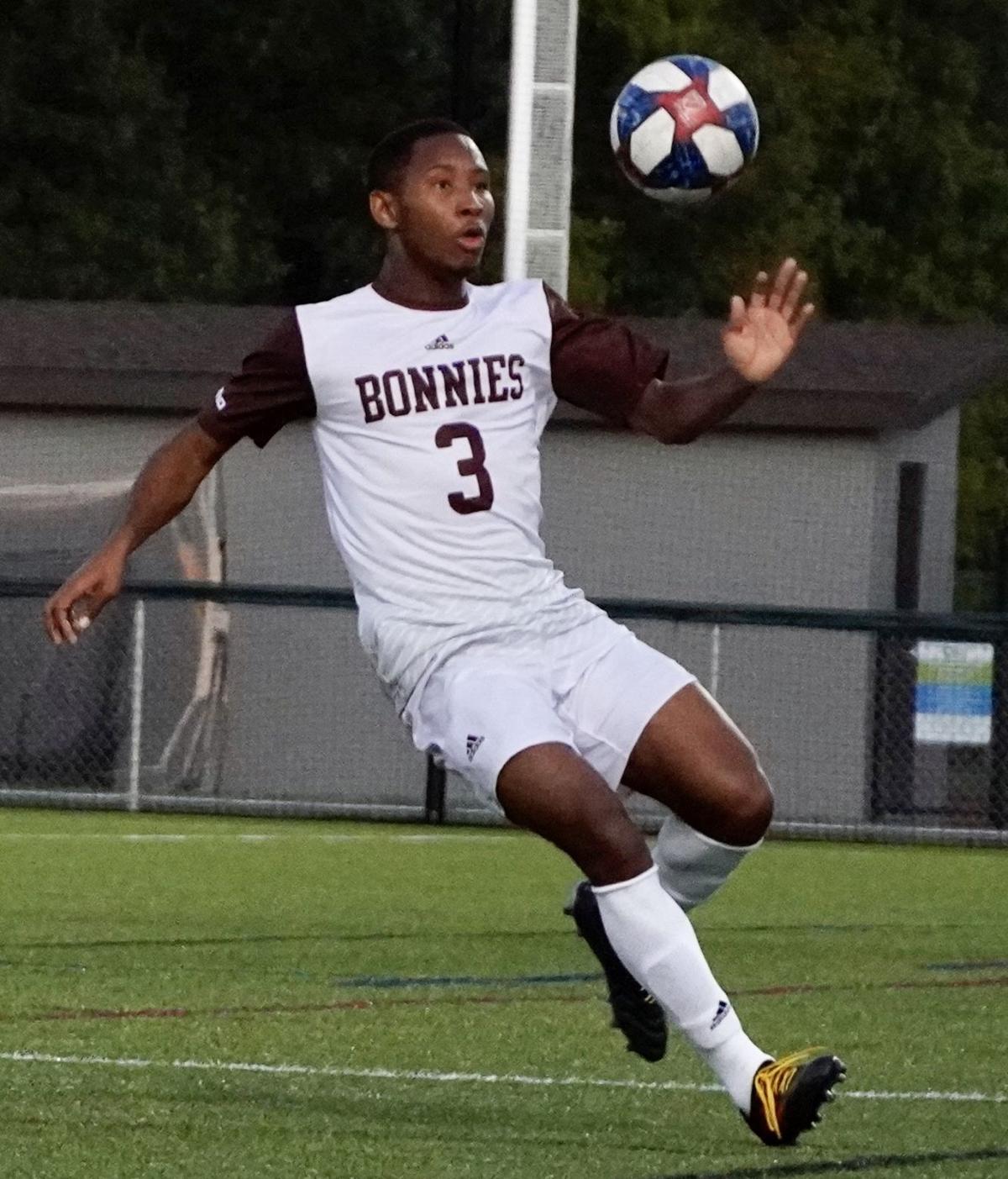 Defender John Engerman has stepped in and played a major role on the Bona back line. (Ben Tsujimoto/Buffalo News) 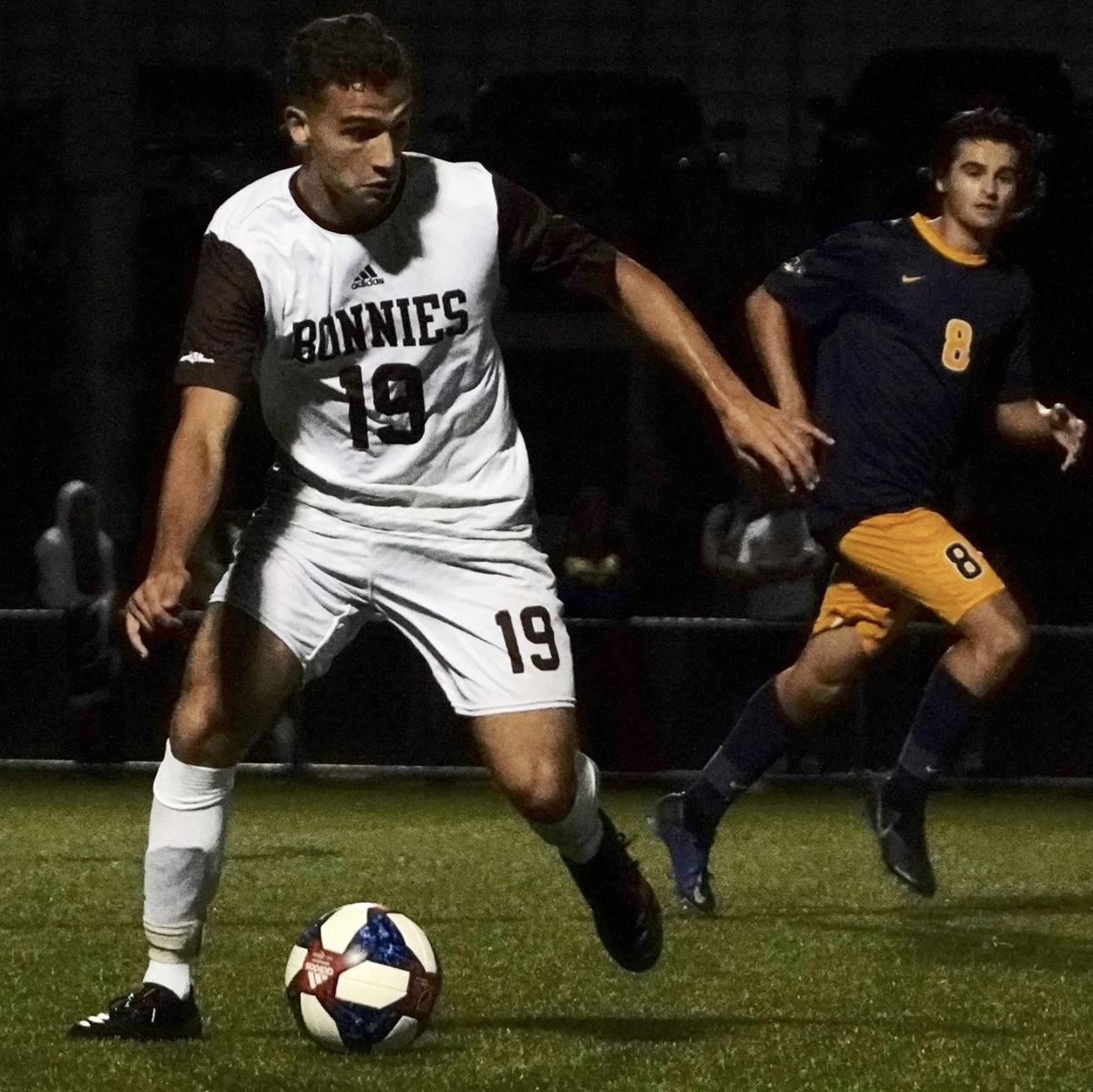 A sterling run that led to a goal against Canisius was a promising development for Bonnies freshman Luca Nicastro. (Ben Tsujimoto/Buffalo News) 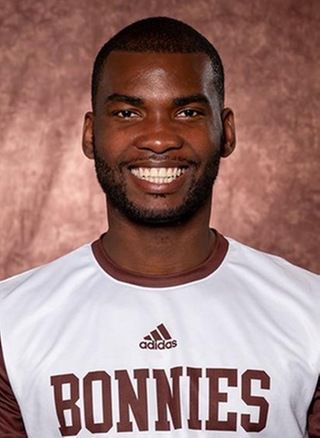 Jaaziel Thompson has a big smile when he's not on the pitch. (via St. Bonaventure Athletics)

The soccer journey for Thompson, a strong, 6'2 center back known to his teammates as either Jaz or Jazzy, could not be more circuitous.

Raised in Kingston, Jamaica, he left home three years ago for the U.S., latching on with Iowa Western Community College in Council Bluffs, of all places, where he played two years. (He's also listed on the roster of a summer team, the Nebraska Bugeaters, which is awesome).

He took his studies seriously, earning his associate degree in just three semesters, and through junior college coaching connections with Oduro and assistant Ryan Arvin, Thompson became interested in the Bonnies, partly for soccer reasons - but also family reasons.

The Jamaican's family is spread out, and Iowa wasn't close to any of them. Thompson's parents, Lorna and Melford, still live in Kingston, while his uncle resides in New York City.

The chief factor in Thompson's decision to attend St. Bonaventure was that his older brother and only sibling, Jason, had moved to Ottawa, Canada, and playing in Western New York made reuniting more feasible than the Midwest.

"I just ended up [in Olean] because I got a good offer, and I have a brother who's in Canada," Thompson summed. "I haven't seen him in a couple years and this is closest to him."

Jaaziel credits Jason as one of his major soccer influences; together, the brothers learned the game from their father at a young age, propelling Jaaziel - then a midfielder who modeled his game after Liverpool great Steven Gerrard - to represent Jamaica at the youth levels.

Tuesday, at a local rivalry game against Niagara University (7 p.m. in NU), will mark the first time Jaaziel has seen Jason in more than two years, when the pair accepted divergent paths.

Jason will see a player who's matured tremendously over the course of two years. After earning all-region honorable mention in his second year in Iowa, Jaaziel signed with the Bonnies in December, which freed him up to train all spring.

One of 15 new players in Olean, Jaaziel was key to Oduro's class; the Ghanaian head coach wanted a blend of older transfers and true freshmen to balance to his roster. And, in a competitive high-major conference like the Atlantic 10, trotting out a left-footed left center back is not so much luxury as necessity, especially if the Bonnies wanted to experiment with a 3-5-2.

"It’s such a massive advantage to have someone on their natural side when you are trying to play [possession], and [Jaaziel's] also very good technically," explained Arvin, who made the recruiting trip to Iowa last year to see him play. "The second part is he is extremely athletic and quick, which made [bringing him in] a no-brainer."

When asked about Jaaziel's path from Jamaica to Iowa to Olean in the preface of a question, Oduro deadpanned: "It was an easy move.

Until a 3-0 drubbing of Canisius earlier this month, Oduro had never beaten his former boss, something that gnawed at him. Usually loath to put more importance on one game than another, Oduro stressed to his team before the match that it was a game he badly wanted to win, and his players rose to the occasion.

"[Coach] was pretty amped for this game and so were we," Thompson said.

That the victory fell on Oduro's 34th birthday was icing on the cake; his players regaled him in the team huddle after the match.

• Elusive goal scoring: Netting three against Canisius was likely an aberration for the Bonnies, who've scored just two goals total across their other five games. Oduro is encouraged his team is at least generating chances, but scoring is remarkably difficult in NCAA Division I.

"We do generate the offense, it's the final part," he said. "Part of it is sometimes chemistry, but our team can score goals. I've been here five years, and they can score goals more than any team I've coached [at St. Bonaventure]."

A 2-0 loss to VCU, the conference's preseason favorite, to open Atlantic 10 play wasn't encouraging for the Bonnies' attack, even if St. Bonaventure out-shot the Rams, 10-7.

Some weapons could turn the tide slightly; electric winger Isaac Boamah, perhaps the fastest and quickest player in the A-10, approaches full health, and senior striker Jacob Dyck can create opportunities and worry defenses.

Can someone - such as freshmen Luca Nicastro and Joshua Pulla - step forward as a poacher?

• Rebuilding the back line: Regardless of whether Oduro plays three or four in the back, the major figures are the same - and none of them is Nicola Bonso, the hard-nosed Italian who thrived the last two years.

Thompson is joined by Julius Stefansson, a JUCO transfer originally from Iceland, and John Engerman, a true freshman from the Virgin Islands.

Although Iceland and Jamaica rarely appear in the same sentence, that hasn't hampered the partnership between Stefansson and Thompson.

"It's been natural," Thompson said. "Julius just came in this semester, and there's a way in soccer that some people are just in sync, and we're [that way]. The whole back line is being there for each other, looking over their shoulders and talking."

Aidan Conaghan has been rewarded for his loyalty to the program and individual development, carving out more minutes - and even a start for the suspended Perkins vs. VCU. Callum Beattie, a freshman from Hong Kong, was terrific against Canisius and could contend for a larger role.

Replacing Luke Iacobellis, who finished second in the conference with 73 saves last year, has been done by committee so far, with DePaul transfer Trevor Wilson starting the A-10 opener and thwarting this set piece in acrobatic fashion. Freshman Justyn Sandhu will likely earn starts this year, too.

ICYMI | Here is another look at Trevor Wilson's fantastic diving save against VCU Saturday night!ð§¤ pic.twitter.com/B6TZT9hpYo

With 15 new players and just a month under their belt, Oduro is still figuring out his best lineup. "We're still not there yet, we don't know our main core yet. We are still trying to figure it out."

• Can the Bonnies threaten in the A-10?: St. Bonaventure was picked to finish 12th of 13 teams in its conference, which means the league's coaches aren't taking them seriously.

Still, with only three conference home games remaining, it's worth keeping an eye on the development of Francesco Caorsi, a transfer from Central Arkansas, and Fredrik Hansen, who moved from a central role to the wing with exciting results.

They'll be seniors next year with Thompson and Wilson, and it's unlikely Oduro will have to again weave in 15 new players; barring unforeseen changes, a return to the conference playoffs could be on the horizon. For now, though, the Bonnies will continue to scratch and claw for results.

"The guys have a fighting spirit, and that's what I like about the team," Thompson said.

Jaaziel Thompson, who wound up in Olean to play soccer by way of Jamaica and Iowa, has made his mark for the Bonnies and reconnected with his family, too. (Photo courtesy of St. Bonaventure Athletics)

Fredrik Hansen, No. 8 in white, and Francesco Caorsi, No. 4 in white, will have major roles over the next two years for St. Bonaventure. (Ben Tsujimoto/Buffalo News)

Defender John Engerman has stepped in and played a major role on the Bona back line. (Ben Tsujimoto/Buffalo News)

A sterling run that led to a goal against Canisius was a promising development for Bonnies freshman Luca Nicastro. (Ben Tsujimoto/Buffalo News)

Jaaziel Thompson has a big smile when he's not on the pitch. (via St. Bonaventure Athletics)