Subscribe for $1
Read Today's E-Edition
Share This
Maradona's 'Hand of God' shirt for sale with $5.2M estimate
0 Comments
Share this
Support this work for $1 a month

The shirt worn by Diego Maradona when he scored the controversial "Hand of God" goal against England in the 1986 World Cup is for sale for the first time.

Auctioneer Sotheby's said Wednesday that the jersey could fetch more than 4 million pounds ($5.2 million) in an online auction that opens April 20.

Brahm Wachter, Sotheby's head of streetwear and modern collectibles, said the shirt is "on a small list of the most important sports memorabilia items in the world."

"I'll never get to handle anything this good again," Wachter said. "The moment is iconic in the history of sports."

Maradona scored two goals during the quarter-final game in Mexico City on June 22, 1986, just four years after Britain and Argentina had fought a war over the Falkland Islands. The Argentine great's first goal was ruled a header, but the ball had bounced off Maradona's fist, out of sight of the referee.

Maradona's second goal saw him dribble the ball past almost the entire English team before beating goalkeeper Peter Shilton. In 2002, it was voted "goal of the century" in a FIFA poll.

Wachter said the two goals "balance each other brilliantly" and reveal two facets of Maradona's character.

The first "was really cunning and did involve an element of luck," he said. "But then he scored a second goal, which was one of the most unbelievable - almost angelic - goals ever."

Argentina won the match 2-1 and went on to win the World Cup. Maradona, considered by many to be the greatest player of all time, struggled with cocaine abuse and other excesses and died in November 2020 at age 60.

After the game Maradona swapped shirts with England midfielder Steve Hodge, who never sold it, until now. For the past 20 years, it has been on loan to England's National Football Museum in Manchester.

The blue shirt with stripes of lighter blue was a one-off, hastily assembled because the tops Argentina's team planned to wear were judged too heavy for the Mexico City heat. The Argentinian Football Association patches were sewn on, and sparkly numbers, including Maradona's 10, were ironed onto the back shortly before the match

Hodge said he had been a "proud owner" of a shirt that "has deep cultural meaning to the football world, the people of Argentina, and the people of England." According to Wachter, Hodge had decided "that the time is just right" to sell.

Prices for sports memorabilia have soared in recent years. The shirt could beat a record for a piece of sportswear, held by a Babe Ruth New York Yankees jersey that sold for $5.64 million in 2019. A buyer paid $8.8 million for the manifesto that launched the modern Olympic movement, a record for a sports item.

The shirt will be on display in Sotheby's London showroom during the April 20-May 4 bidding period. 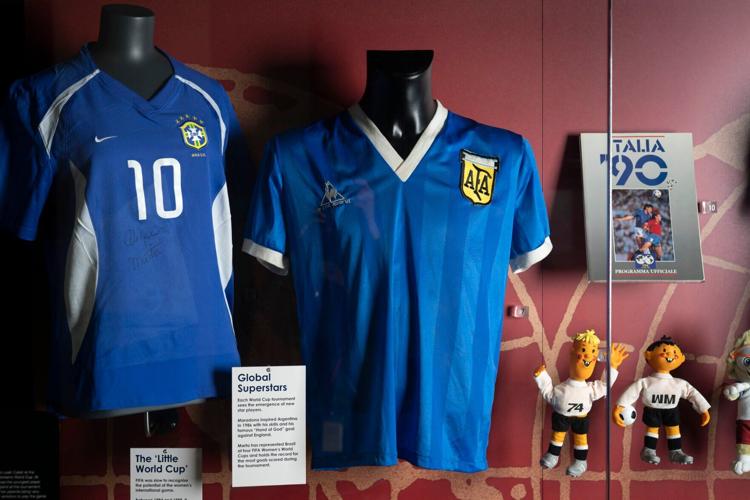 FILE - The soccer shirt, center, worn by Argentina's Diego Maradona in the 1986 World Cup quarterfinal against England is displayed at the National Football Museum in Manchester, England Nov. 26, 2020. 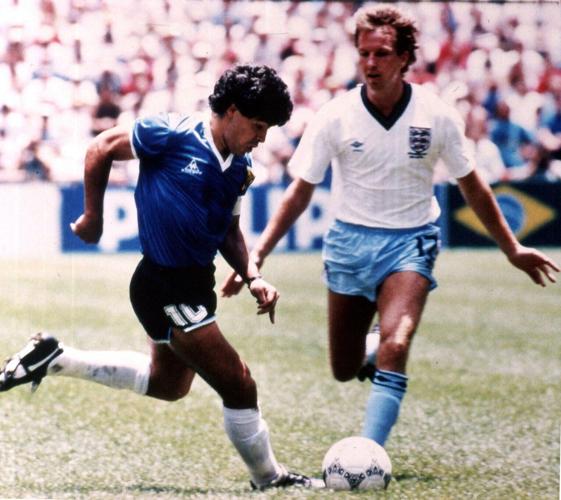