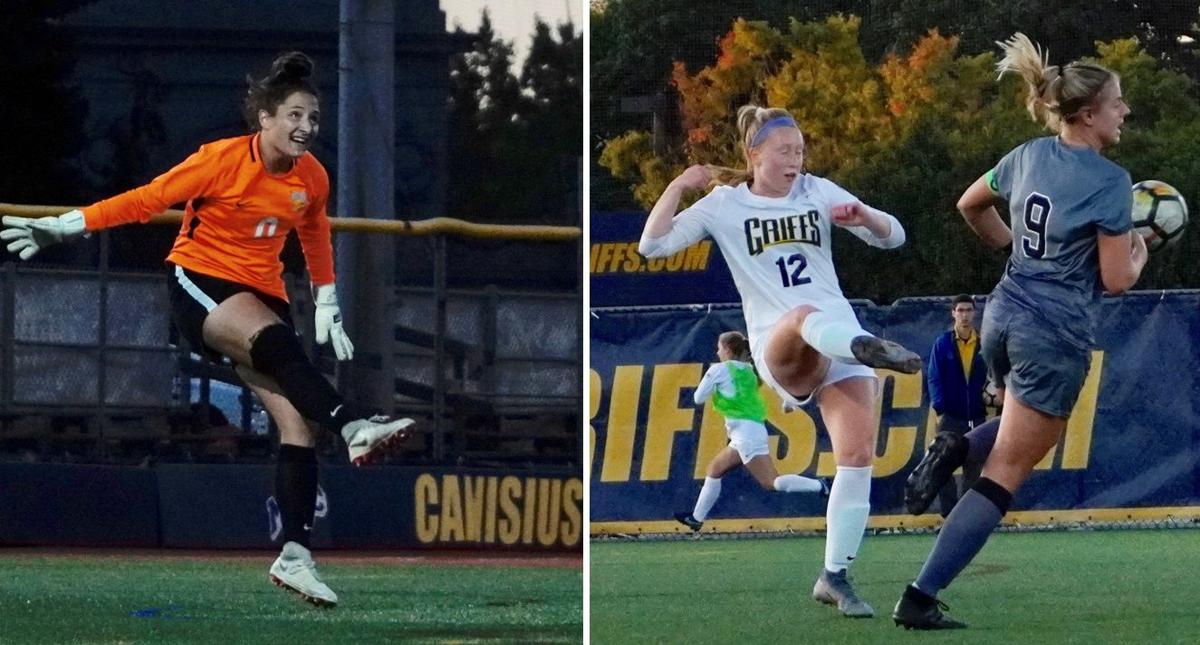 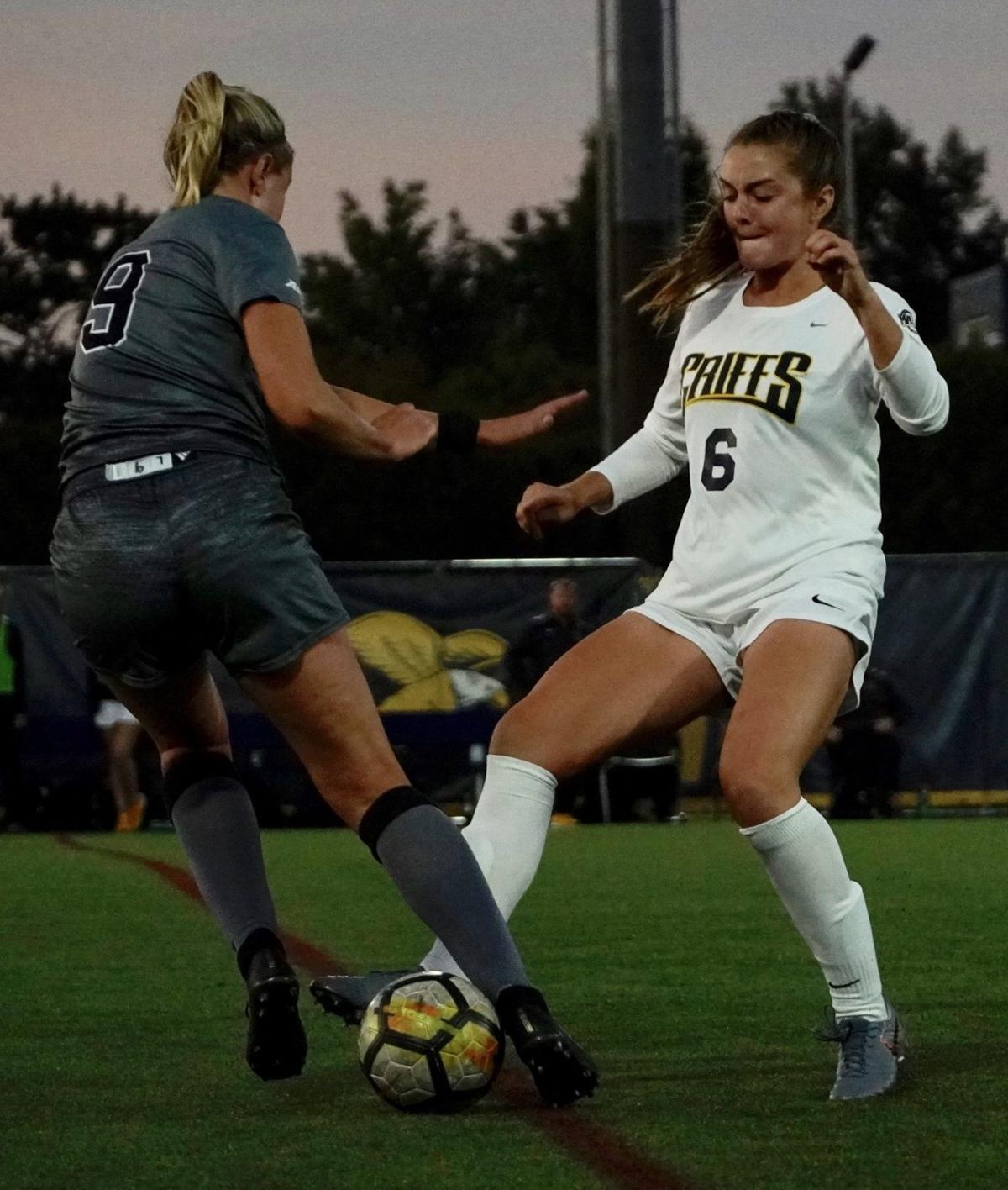 Julia Schurr, in white, has been a find for Canisius. (Ben Tsujimoto/Buffalo News) 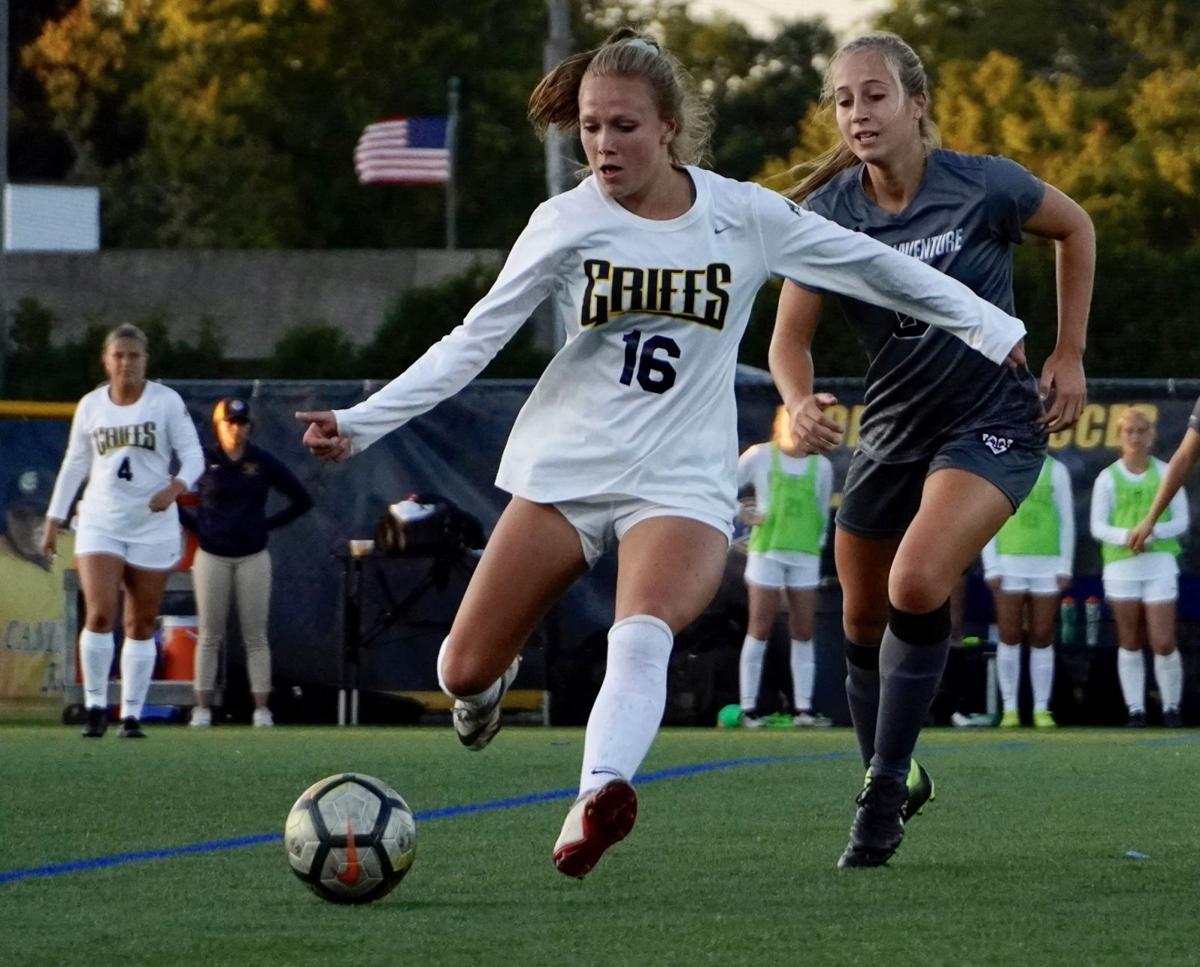 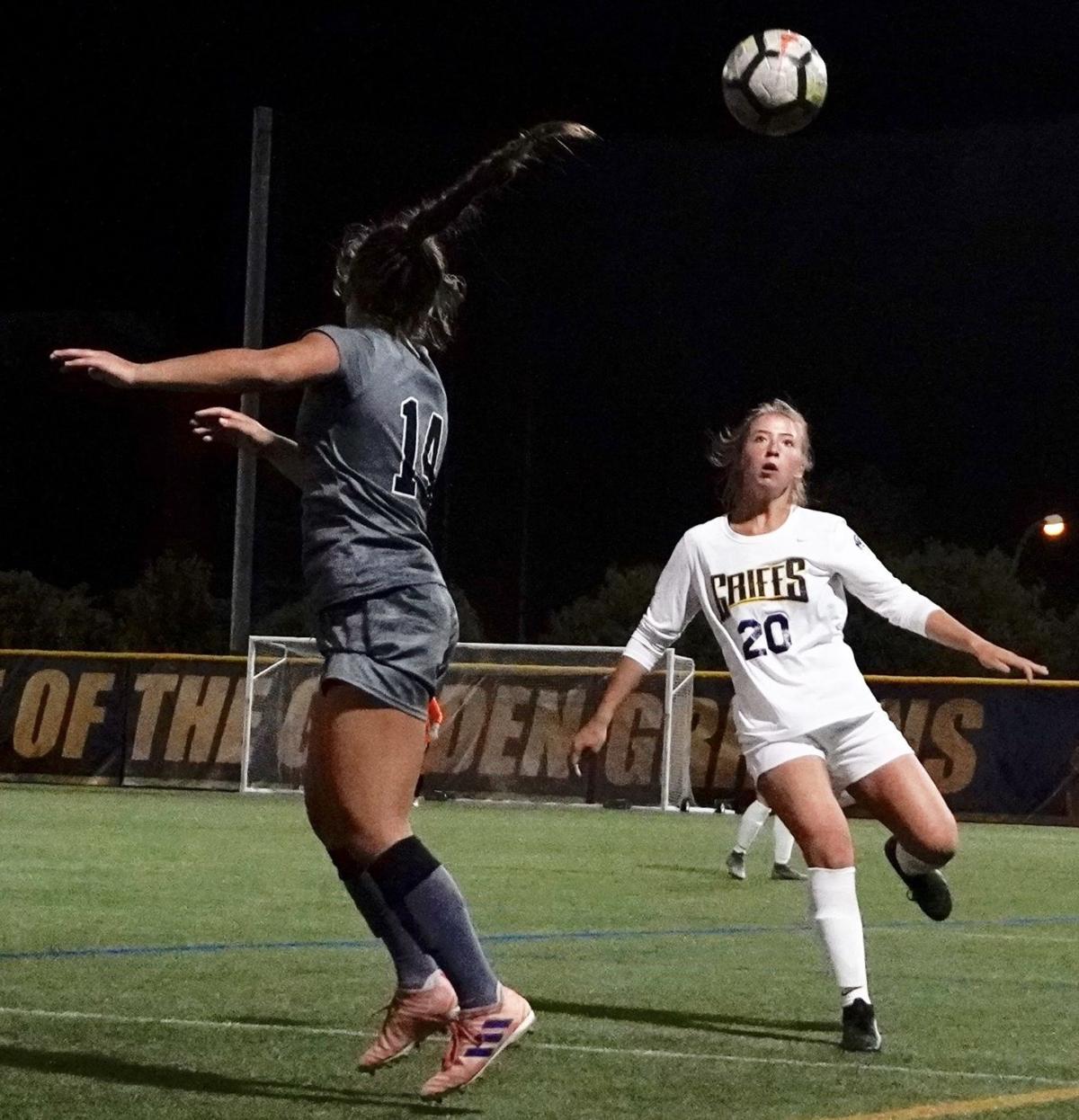 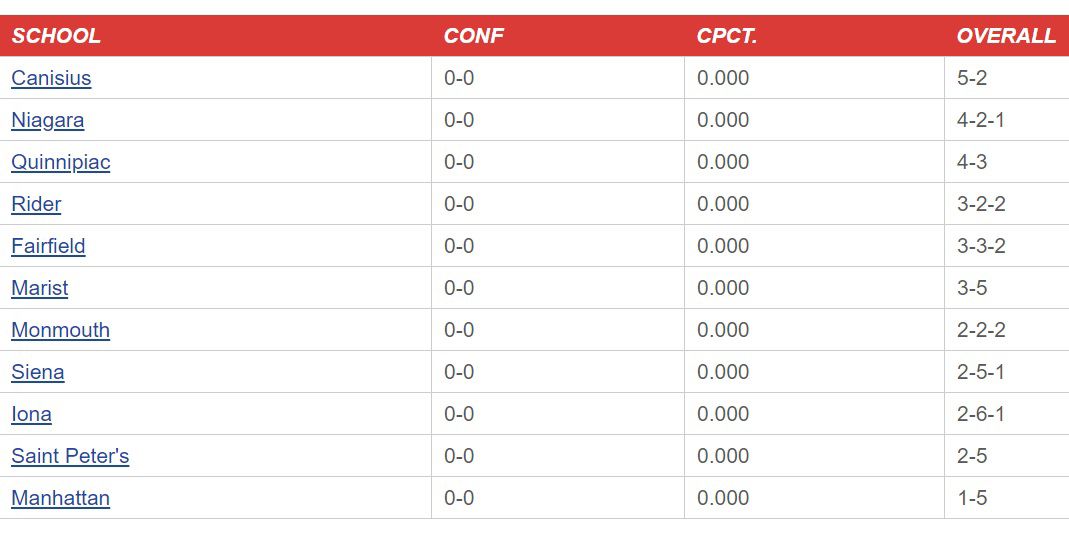 A close friendship between a college senior and freshman is a little unusual, but don't tell that to Canisius senior goalkeeper Alana Rossi and freshman defender Abby Molloy.

The duo has been integral to the Griffs' four consecutive shutouts and 5-2 non-conference record, but beyond that, there are few similarities.

Rossi, an Ontario native, holds the program record for career shutouts and has started every game over her three-plus seasons, 60 in total. She's wrapping up her college studies as an accounting major.

Molloy, however, has just seven appearances for Todd Clark's team. The West Seneca native, who just turned 18, starred for Nardin Academy and the WNY Flash Academy, then opted to continue playing close to home while studying health and wellness on Main Street.

But when you're working together daily to stymie the opposition, these differences are easily surmounted.

"I've gotten really close to Abby, and even some of the other freshmen," said Rossi, sounding a little surprised at herself, following Canisius' 1-0 blanking of St. Bonaventure on Sept. 12.

Molloy agreed, noting how Rossi has taken her "under her wing."

"On the field [Alana]'s a big influence on me - her communication has really helped me get accustomed to college soccer," the freshman said. "We're very close off the field, and I think it translates into how we work together on the field. She's very supportive, encouraging and holds me accountable."

The line of communication between a goalkeeper and her back line is vitally important, and Rossi - she'll admit herself - is a talker.

"I give as much info as possible to people so they're more aware of the field and their surroundings," the goalkeeper explained. "It's great to have a back line who all trust and listen to what I say and react well when I'm demanding."

Molloy has been quick to heed Rossi's direction - a sign of Molloy's maturity, the keeper says - but the center back is far from a doe in the headlights.

Molloy has diligently honed her on-field intelligence through multiple seasons in the Elite Clubs National League (ECNL) as a center back for the WNY Flash Academy, a high-level setting that prepared her for a smooth transition to college soccer.

"Those [Flash] teams were disciplined and well-coached, and I needed to be poised and organized as a leader of those teams’ defenses," Molloy explained.

Molloy, whose younger sister Brigid has been called into United States women's national team camps, was on Canisius' radar years before committing. She participated in the Griffs' ID camp as a ninth grader, and opportunities for Clark to watch her since have been plentiful.

With that considered, it's not a shock the head coach was willing to put her in the starting XI from Day One. What has been shocking, however, is Molloy's consistency over her first handful of NCAA Division I matches.

"[Abby's] really a cerebral player; she gets the game at a really high level," Clark said. "I'm really pleasantly surprised with how good she's been."

Even though Rossi is just shy of her 21st birthday - young for a college senior - her experience, talent and intensity has been invaluable for a team accustomed to playing close, low-scoring games. She's been a strong pupil for goalkeeper-focused assistant coach Gabrielle Wilson, who understands how sometimes smart communication can prevent opponents' chances just as effectively as a well-timed slide tackle.

While a goalkeeper might be judged on the surface by her goals-against-average or win-loss record, it's tougher to quantify and appreciate the chances Rossi has thwarted - or goals she's prevented - with a well-timed shout to her left back.

"Alana has seen it all," Clark said, noting how Wednesday's win over Delaware State represented her 22nd clean sheet (which, according to GoGriffs.com, isn't a two-word phrase you raise before or during a match).

Rossi has experienced more losses than wins over her 60 starts, and her 9-15-6 record in MAAC play has been littered with some heart-wrenching losses. As unwelcome as they may be, defeats against older, better teams is a teaching tool, Clark says - one that has positioned the goalkeeper to now serve as one of those older, better players.

In referring to Rossi, but also classmates such as Hope Gilchrist, a starting center back this year who's served in several roles; Maddie Beaulieu, a do-everything player out with injury; and Alicia Larsson-Vahlberg, a key piece of the rotation, Clark said: "They've got experience the hard way."

Their trajectories are polar opposites. Rossi seeks to close her career with a memorable senior year; Molloy sets a high standard to build upon in the coming years. But their collective goal is the same: to take the Griffs program, which hasn't won a Metro Atlantic Athletic Conference playoff game since 2010, to new heights.

The quest begins at 1 p.m. Sept. 21, vs. preseason MAAC No. 2 Quinnipiac, at Demske Sports Complex.

• Clark immediately cites a 3-1 loss to Robert Morris as an early season turning point for the Griffs. Knowing his team is not an offensive juggernaut, conceding three times is a recipe for disaster.

The next two days of training went back to the basics, reinforcing the mindset he demands from his team: "We're going to be gritty. Get the ball down and fight for it."

Now that the midfield and defense has regrouped from a toughness standpoint, Clark is pleased with the progress. "Defensively we're fairly resilient," he admitted. "One [goal for us] might be enough. I don't think most teams are going to score two or three."

• The recruiting battleground for top local talent - of which there's been significantly more in the last five years - is fierce.

UB attracts for its size, reputation and recent NCAA Tournament appearance, while Niagara and St. Bonaventure vie with Canisius for private school seekers. Daemen, an NCAA Division II school with scholarships, has recruited exceptionally, too.

It's this environment where Canisius has struggled in the past, but - thanks to the steady relationship-building of Clark and new assistant Ryan Louis - the Griffs appear to be turning a corner.

This year's freshman class is littered with local talent beyond Molloy, hailing primarily - but not exclusively - from the WNY Flash Academy.

"We're really pleased with all of those kids that were local that came on this year," Clark said.

"There was a time when Canisius wasn't the best Division I program in the area; now maybe we're not the best, but at least we're in the conversation. Beating the other [local] teams certainly helped."

• Before we get too ahead of ourselves about the prospects of this year's Canisius team, remember that, in 2017, Clark's side began the season 5-2, then finished 2-6-2 in conference play.

Even though their non-conference record is the best in the MAAC, that's largely apples and oranges; Monmouth just whacked No. 25 Texas, 4-0, and were the preseason darlings again for a reason.

Siena and Quinnipiac have all tested themselves against bigger schools from bigger conferences. Niagara, which advanced to the semifinals last season, is trending upward rapidly.

For the Griffs to finish even in the top six would be a meaningful accomplishment.

• Clark stumbled upon one of his most important players at the last minute. While most recruits are locked up in the winter or early spring, Luca Fahmer - a transfer from Youngstown State - wasn't officially signed until mid-summer.

While Fahmer wanted to return to the area - she was a Flash Academy product as well - the presence of former Olympic Development Program teammate Hannah Morpurgo helped, too.

Both of Fahmer's goals have been game-winners, and the technical center mid's ability to keep the ball gives the Canisius back line an occasional breather.

• Finding the back of the net has been and will be a major challenge for Canisius in the MAAC. Losing Maddie Beaulieu - last year's leading scorer - and newcomer Jen Romero for an undetermined period of time is not helping the cause.

Hope Balling, who featured as an outside defender last year but was pegged for a major role in the attack as a sophomore, suffered a serious ankle injury, a tough setback for the player and the program.

Shauna Lee, Perry, Fahmer, Larsson-Vahlberg and senior Gretta Dry are the attackers who filled the void of the injured trio, while fullback Maggie Canitia loves to get forward. This has allowed Clark to remain positive.

"Scoring goals in the run of play ... I don't know if there's another coach more excited about that," he quipped.

Julia Schurr, in white, has been a find for Canisius. (Ben Tsujimoto/Buffalo News)