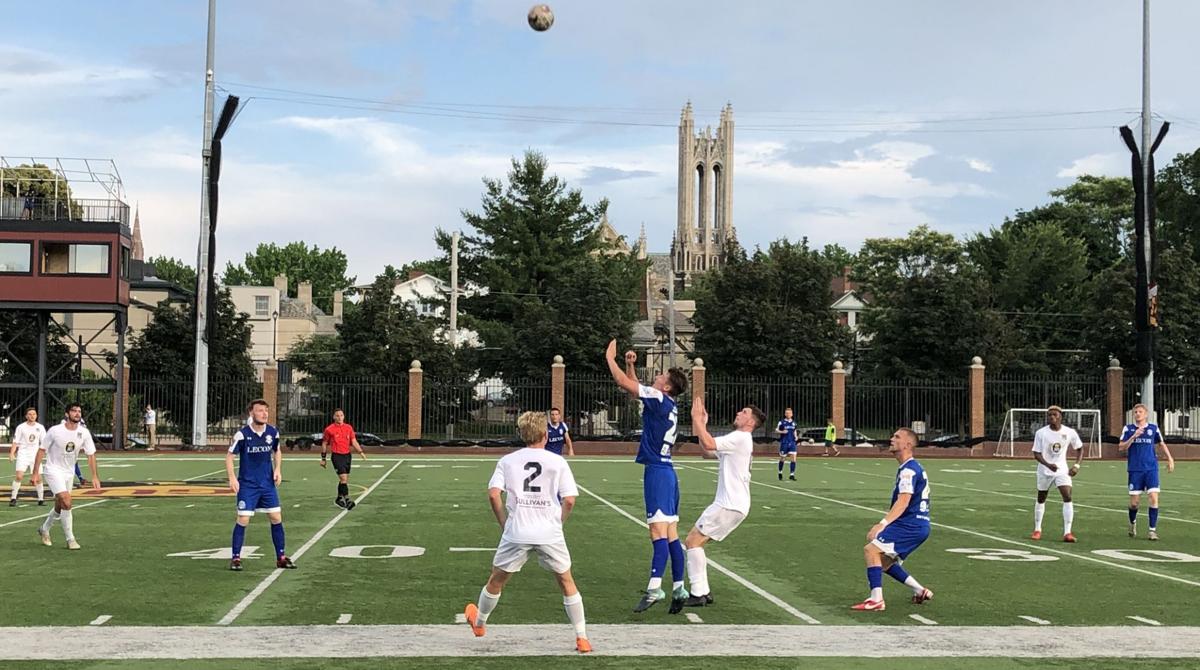 FC Buffalo and the Erie Commodores played to a 2-2 draw on Friday. (Ben Tsujimoto/Buffalo News) 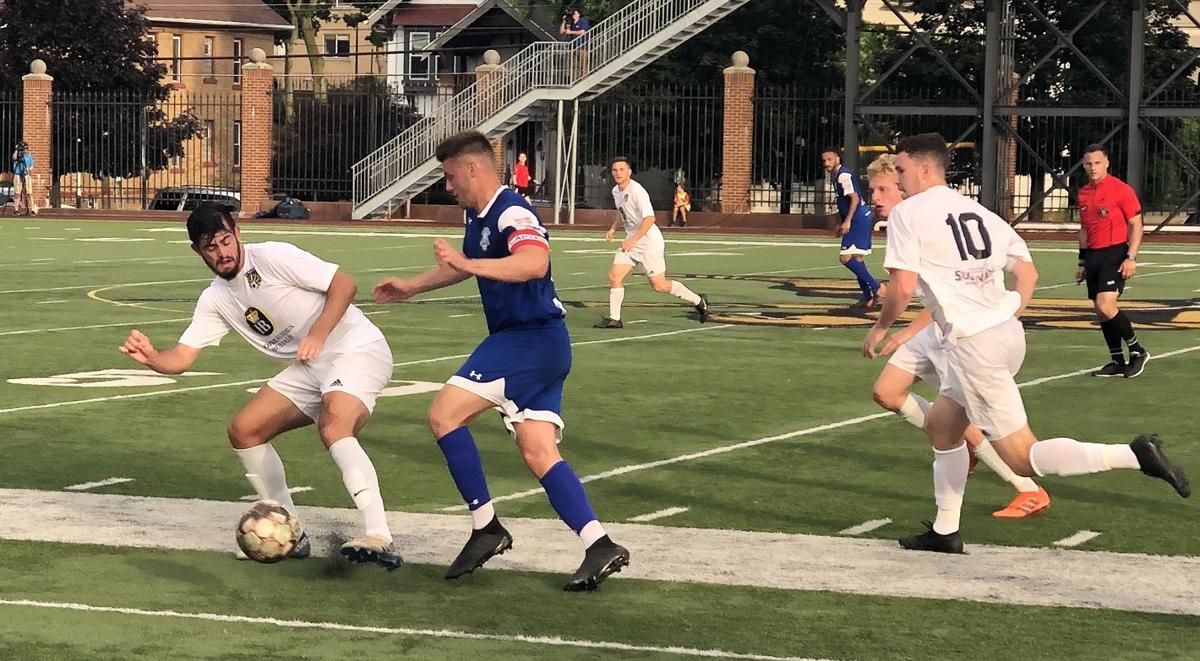 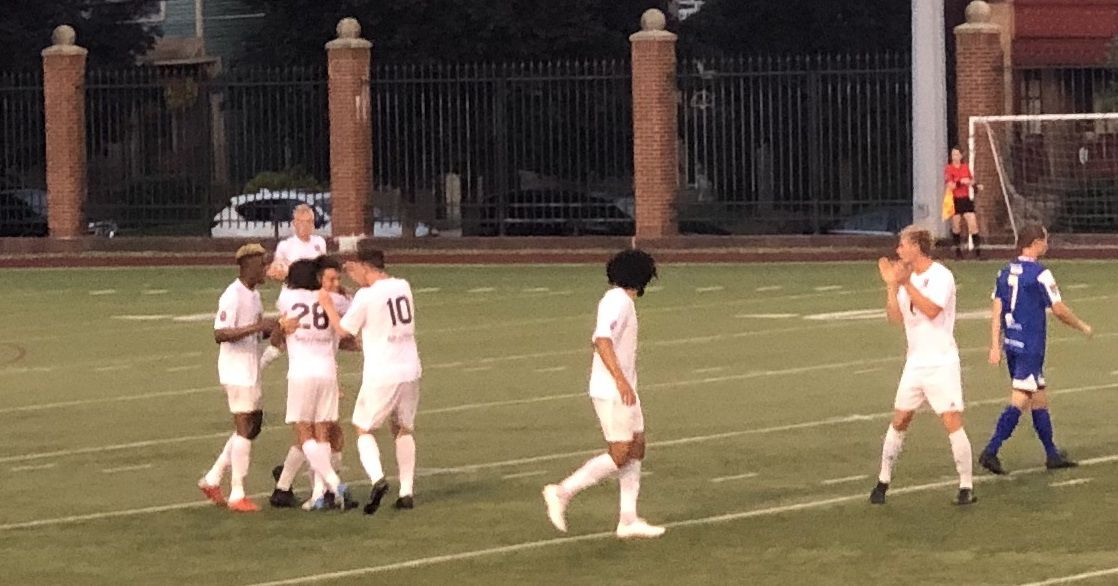 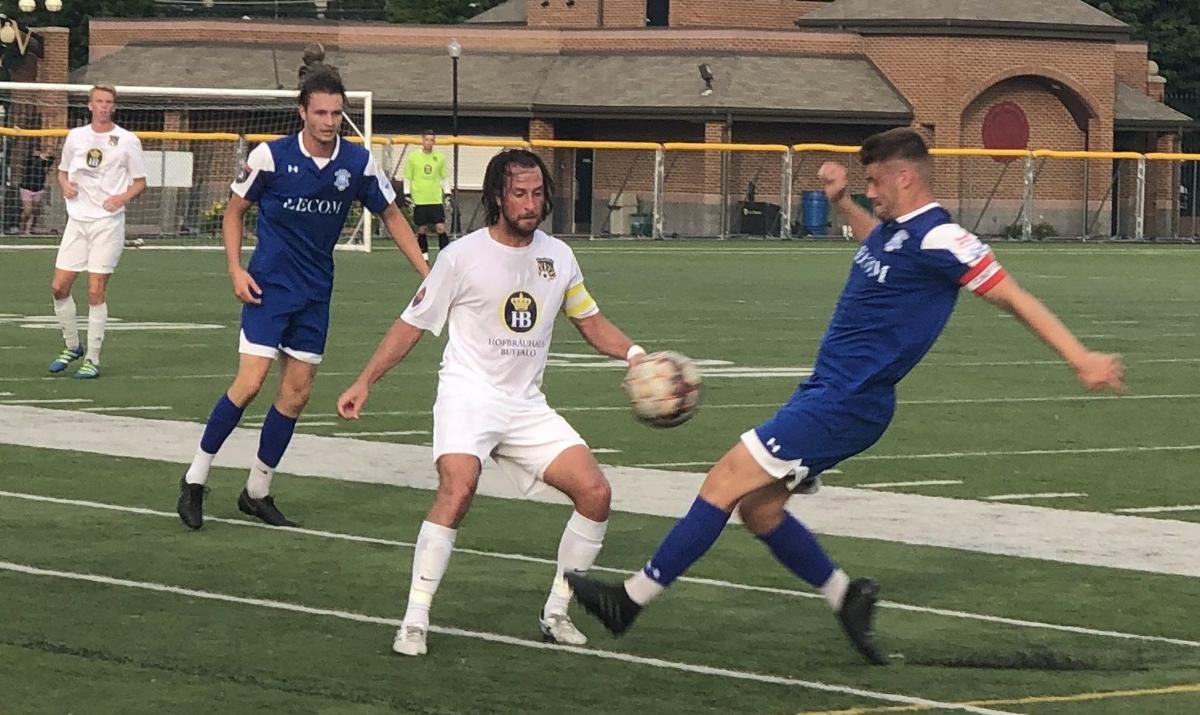 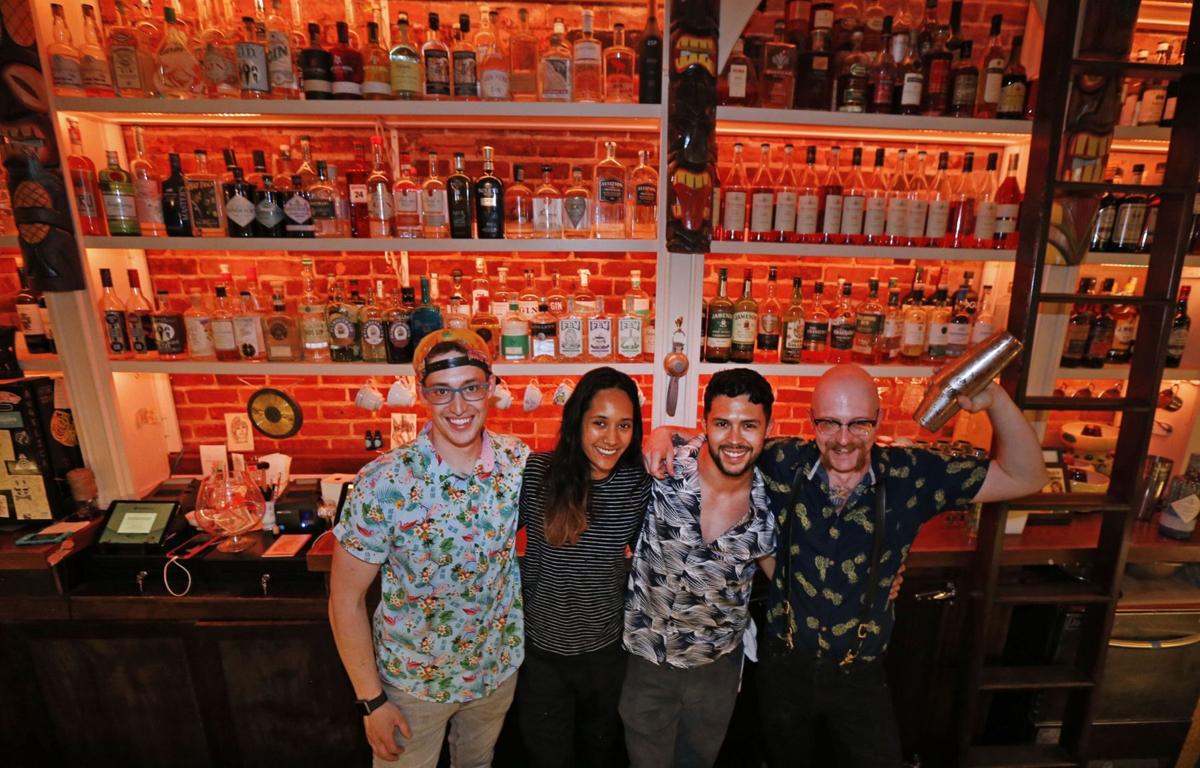 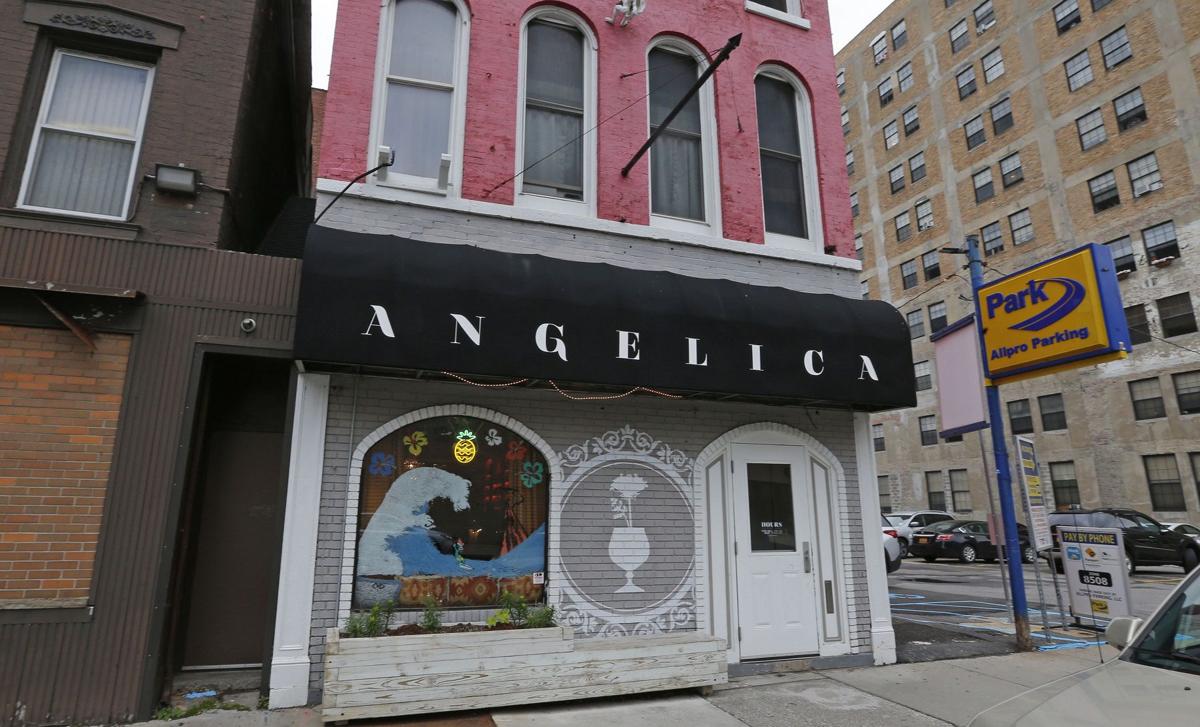 Angelica Tea Room at 517 Washington St. has morphed into the Angelica Tiki Room for the summer. (Robert Kirkham/Buffalo News) 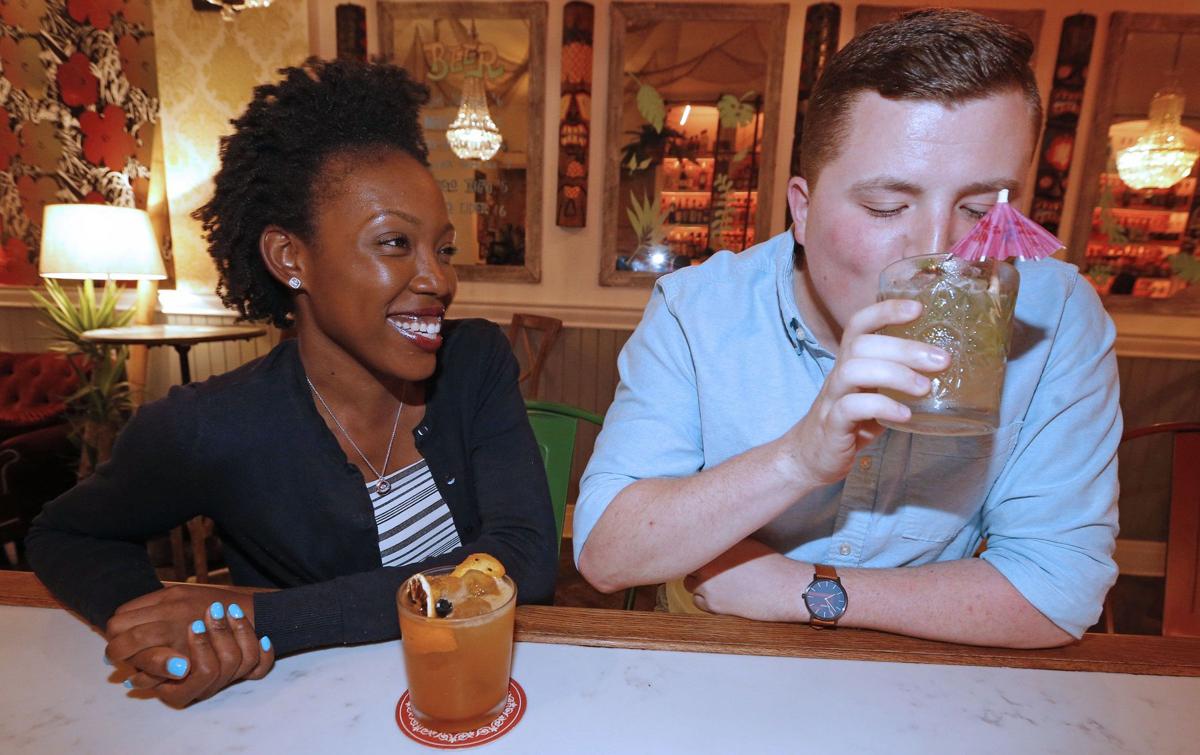 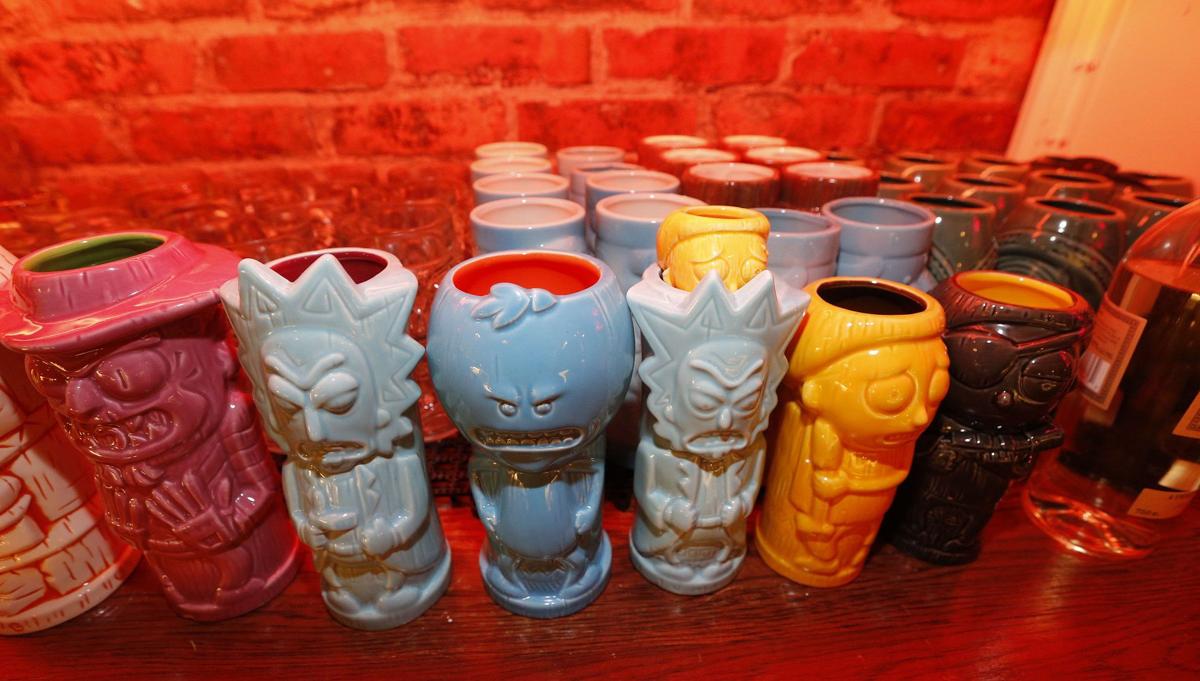 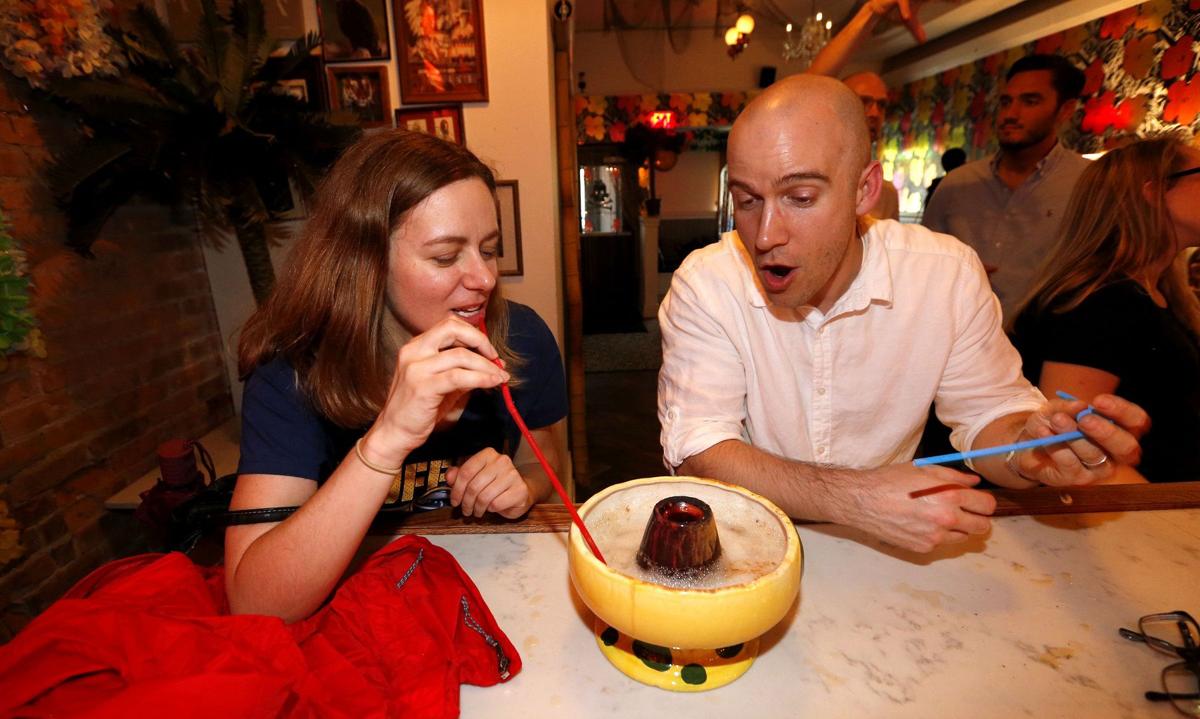 Jessica Myers and Jacob Merrill share a flaming Rum drink at Angelica Tea Room at 517 Washington St. in downtown Buffalo has morphed into the "Angelica Tiki Room" for the summer. The place has a fresh Tiki-inspired look with new beer and new Tiki drink menu. This was on Thursday, June 20, 2019. (Robert Kirkham/Buffalo News) 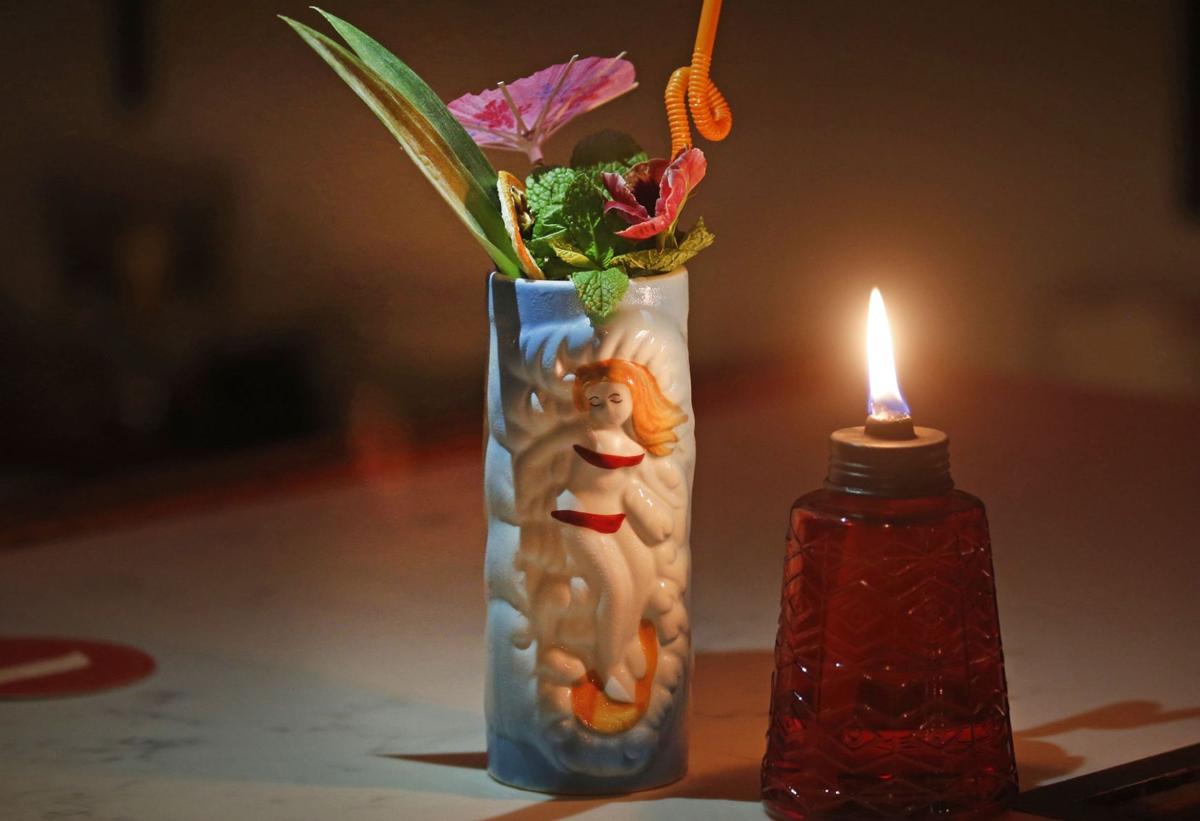 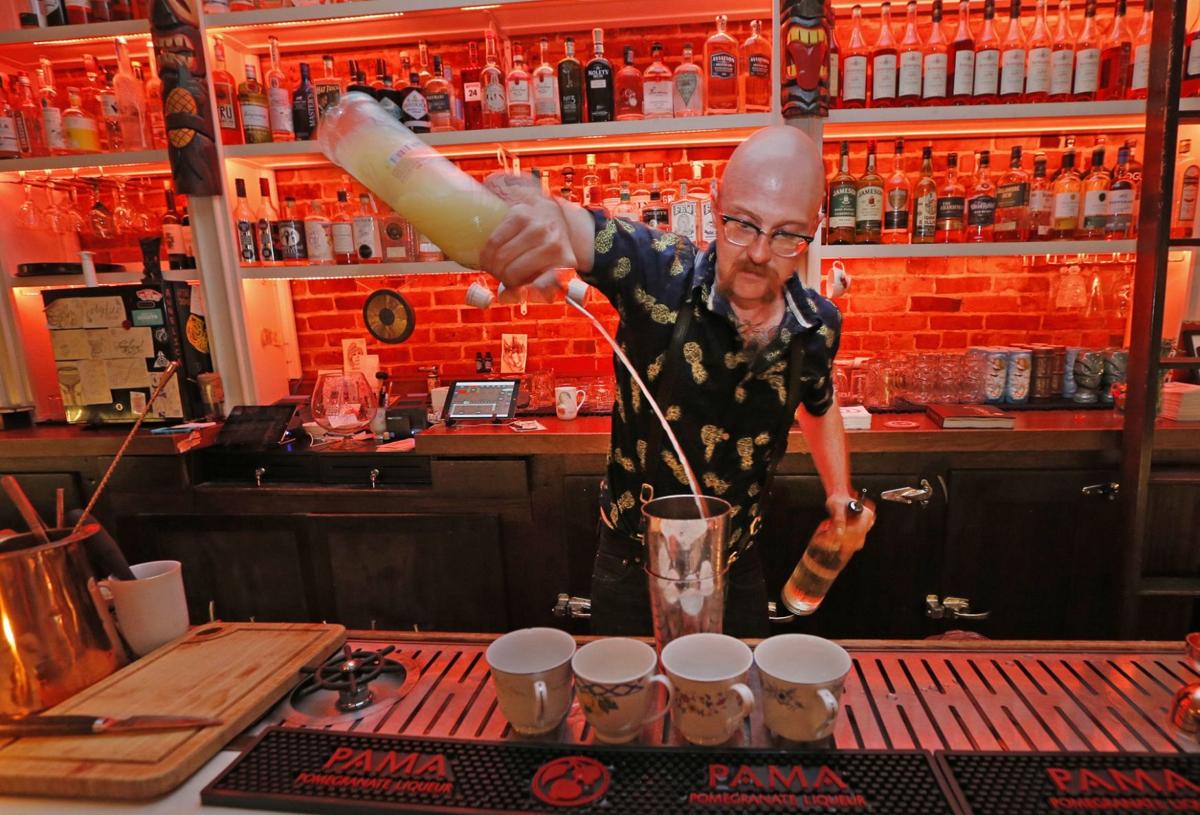 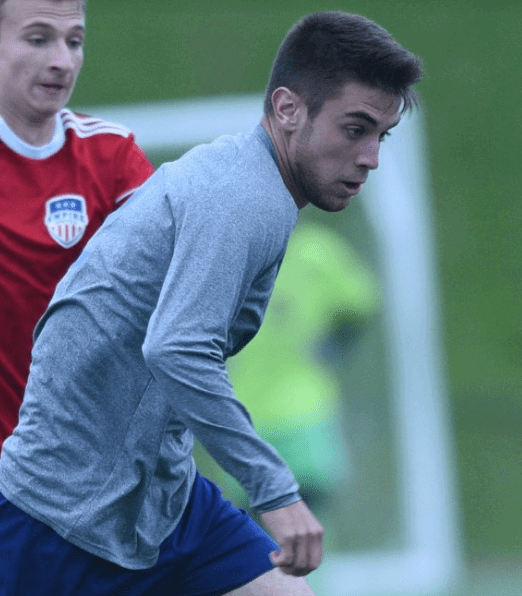 Taner Bay, right, turns from pressure during an early-season scrimmage. (via FC Buffalo)

Sometimes it takes a moment of brilliance from an unexpected source to keep postseason dreams alive. That's what FC Buffalo experienced in Friday's dramatic 2-2 draw against the Erie Commodores at Gannon University.

Subbed on in the 90th minute, seldom-used reserve Taner Bay cracked a wonder-strike that froze Erie goalkeeper Chris Ralph and salvaged a road point for the Wolves, who looked beaten for long stretches in the second half.

"I caught it right in the sweet spot," explained a stoic Bay after the contest. "I just saw a little bit of space and figured I'd hit it and see what happens."

The 30-yard howitzer was the type of dead-ball knuckler you'd see from a free kick by Cristiano Ronaldo. It flew directly at Ralph before veering sharply away from the goalkeeper inside the far post, keeping almost the same trajectory the entire time. It's too bad there's not better video of the goal-of-the-year candidate, which came in the 94th minute.

Best video we can find of Taner Bay’s wonderstrike to knot the game for @FCBuffalo vs. Erie in the 94th minute. The @RiderBroncs midfielder hit it on a rope. @NPSLSoccer pic.twitter.com/f3Us3O5qG4

"Just a wonder-strike," remarked FC Buffalo head coach Frank Butcher after the match. "That was just a brilliant shot, how much it moved."

Bay's late-game highlight-reel goal brought back memories of Regan Steele's 35-yard blast at the same venue in 2016, which wound up a 3-3 draw and knocked the Wolves out of playoff contention.

With the home side reeling, the Wolves nearly won the match in the final seconds, when Nevado Elliott outworked a defender and served a square ball to forward partner Kieran Toland, who took a sharp touch to his left and curled a shot inches wide of Ralph's right post. It would have been an absolute stunner.

The Commodores will rue the failure to take three points from the contest, as an insurance goal seemed inevitable with FC Buffalo pushing for an equalizer late. Erie reserve Evan Beutler smashed the crossbar after an industrious effort by midfielder Owen Connelly, not long after Wolves goalkeeper Jeremy Figler acrobatically denied Curtis Stollery on a 2-on-1.

Erie got on the board first in the 23rd minute, when fullback Rhys Wallace took advantage of space on the wing vacated by FC Buffalo's Will Warren. With Wallace set to serve a cross in, a hustling Warren fouled the Commodore inside the 18-yard box, and the center official pointed to the penalty spot with no hesitation. Ashley Phillips, Erie's captain, hammered the ball past Figler for the early lead.

FC Buffalo responded early in the second half, however, off a well-executed set piece. Kieran Toland's in-swinging drive into the mixer met the head of Cameron Emerson's run to the top of the six-yard box. Neither the goalscorer nor Robert Williamson was marked on the play.

Phillips put the Commodores back in front as his direct run down the left side was picked out by a well-weighted through ball from Will Stone; Phillips beat Figler again with pace from close range.

With the result, Cleveland SC clinches one of the two playoff spots in the Midwest Region Great Lakes Conference, with Rochester, Erie and Buffalo still in the hunt. FC Buffalo faces a must-win at 2 p.m. Sunday at Robert E. Rich All High Stadium when the Lancers, who would clinch the final postseason berth with a draw, come to town.

If the Wolves down Rochester Sunday, then they'll need a victory in Cleveland next weekend as well as an Erie loss to Rochester in the Commodores' finale [NPSL tiebreakers]. In other words, the odds are stacked against Frank Butcher's team, but a loss Friday would have doomed the side to another playoff-less campaign.

"It could have been worse [Friday], but we were looking for a W, so it kind of stings," Butcher summed.

Patience by the Bay

It's a familiar storyline each season in the National Premier Soccer League. A large group of players competes for spots on a club's the 18-man game-day roster for the first few weeks of the season, and once a general rotation is established, many of the fringe players drop out.

Not so with Taner Bay, who'd played the final eight minutes of FC Buffalo's two most recent road games after not making the 18-man roster the rest of the campaign. When asked why Bay was not a regular part of the squad, Butcher pointed to the team's early continuity.

"We started off so hot there wasn't really a spot for him, there wasn't reason to pull someone out," Butcher said. "But through injuries – Hunter [Walsh] was hurt [Friday] – it was easy to put him in."

Even though he featured in an early-season scrimmage against Empire United – his former club – Bay has practiced with FC Buffalo at Kunz Stadium at UB North and refused to mentally check out.

"I'd see the guys above me and what they were doing," Bay noted, explaining that Josh Read, Rob Williamson and Kieran Toland were all big-time influences on his development this summer. "I'd take motivation from them, seeing what they're able to pull off in games, and keep working because I know I can play at that level."

Bay, a product of the Empire United Development Academy, is entering his junior season at Rider University, where he started 14 games last fall. While he's still in search of his first college goal, Friday's effort should spark confidence for the approaching season.

On how he's approached this summer – and the patience it's necessitated for in-game opportunities – Bay displayed hunger and confidence.

"[I] stay ready, stay ready for my chance, and put in work at home and at practice," he said. "I know I can come in and do it if I have to."

Seamus O'Keefe, a sixth grader at St. Peter's Middle School in Lewiston, has been accepted for admission to the grade six elite soccer program at IMG Academy in Bradenton, Fla.

FC Buffalo and the Erie Commodores played to a 2-2 draw on Friday. (Ben Tsujimoto/Buffalo News)

Angelica Tea Room at 517 Washington St. has morphed into the Angelica Tiki Room for the summer. (Robert Kirkham/Buffalo News)

Jessica Myers and Jacob Merrill share a flaming Rum drink at Angelica Tea Room at 517 Washington St. in downtown Buffalo has morphed into the "Angelica Tiki Room" for the summer. The place has a fresh Tiki-inspired look with new beer and new Tiki drink menu. This was on Thursday, June 20, 2019. (Robert Kirkham/Buffalo News)

Taner Bay, right, turns from pressure during an early-season scrimmage. (via FC Buffalo)