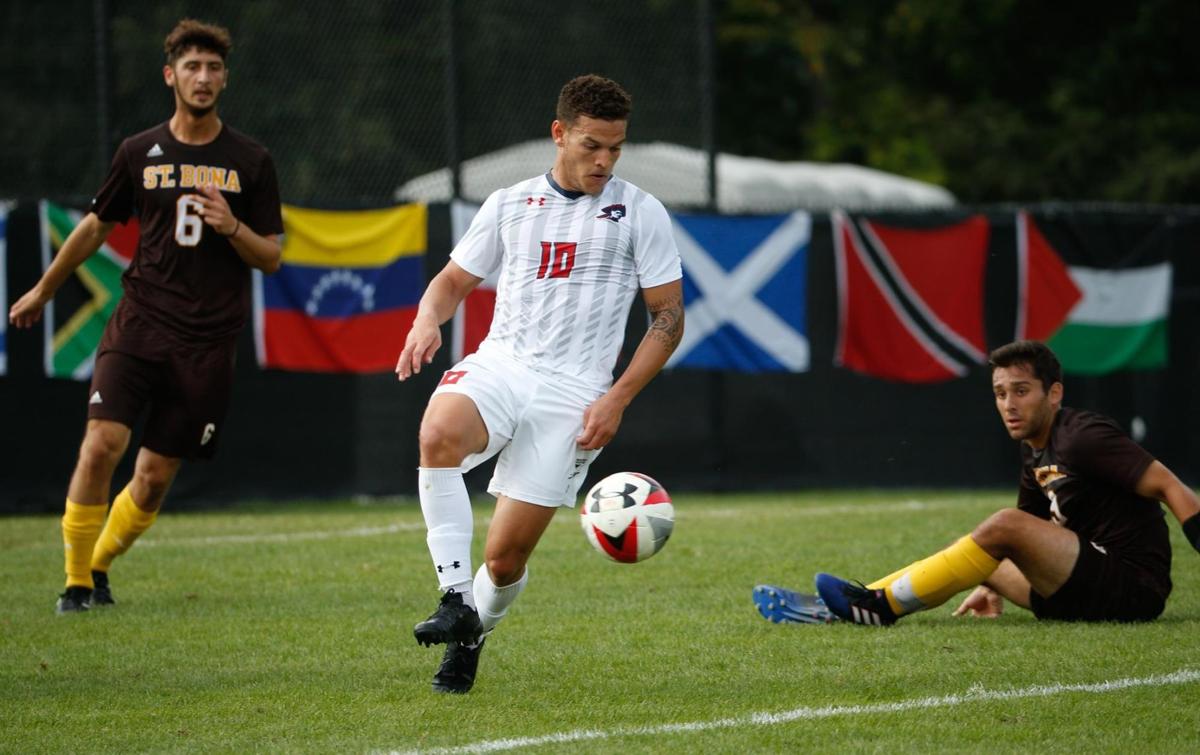 Keane McIvor, in white, is pictured playing for Robert Morris University. He's made a significant difference for FC Buffalo since being cleared to play three games ago. (via Robert Morris) 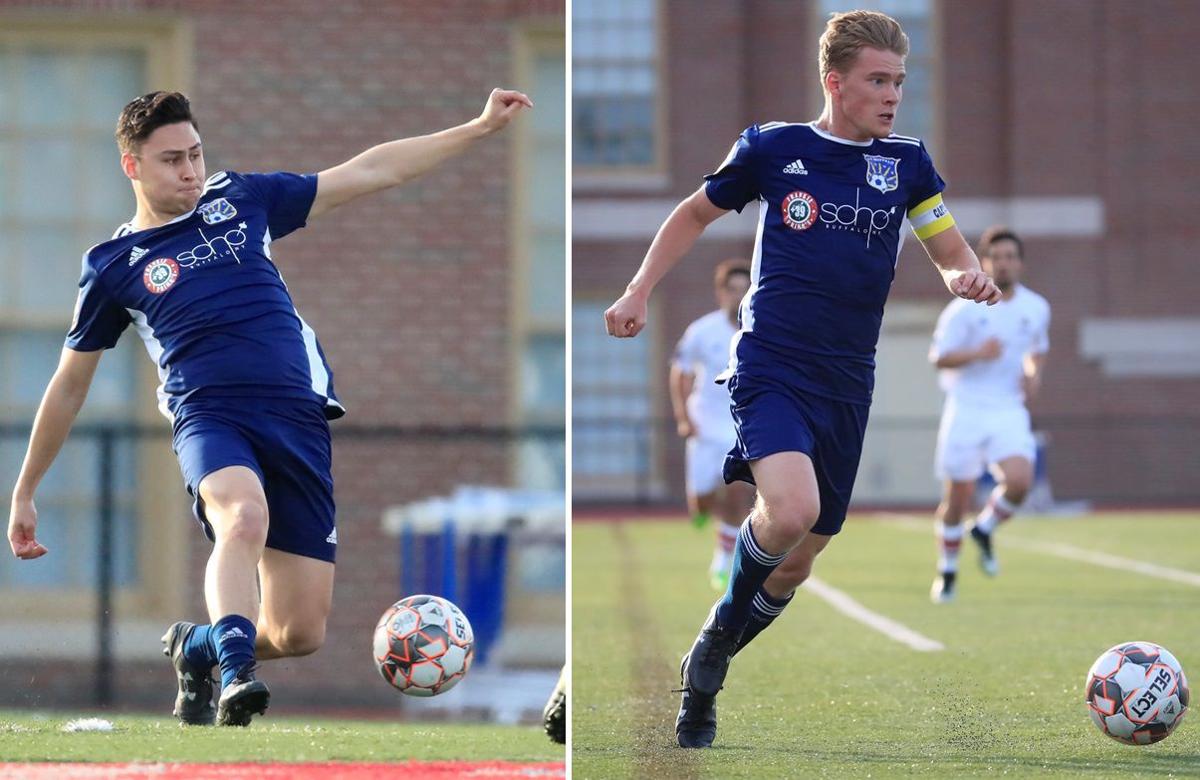 Over the first three weeks of the FC Buffalo season, the Wolves attack was missing something.

At first glance, it seemed an unstable crew of forwards was at least partly responsible. Kendell McFayden's suspension for the first game and Akean Shackleford's late arrival from college meant Isaiah Wilson, deployed as a winger at St. Bonaventure, was thrust into major minutes up front.

When Wilson squandered chances against Fort Pitt and Erie - despite proving to be the Wolves' most threatening attacker - the lack of production was a talking point after the team's 0-2 start.

Now, after taking 10 from a possible 12 points since, FC Buffalo has proven that maybe the forwards - who weren't meshing well with the midfield - weren't the fair targets.

The presence of attacking midfielder Keane McIvor, who was not cleared for the first three matches due to a slow International Transfer Certificate (ITC) approval from his home federation of Trinidad & Tobago, has taken substantial pressure off the forwards, made his midfield mates more threatening and thoroughly changed the flavor of the Wolves' attack, even in the scoreless draw against Cleveland SC in which goalkeeper Steven Casey stole headlines.

"We've been excited to get [Keane] out there," said head coach Frank Butcher after that last home match, before hinting at a breakout. "Where we don't have that full page, connection with him, I think coming in the future we'll see some special things."

"[McIvor] adds a craft and dynamic unique to the rest, and he has the ability to unlock the opposition at any moment," described FC Buffalo assistant coach Casey Derkacz. "Most importantly he adds great experience. In tight games you need to rely on the ones who've been there."

If the atmosphere for Friday night's match against Greater Binghamton FC (7 p.m. at Robert E. Rich All-High Stadium, $8) is anything like his home debut, McIvor will be raring to go.

"It's a wonderful feeling playing in front of so many fans," said McIvor following the draw with Cleveland. "The passion that they have - you feel it during the game. It encourages you to play more and to play better."

FC Buffalo fans can thank returning midfielders Bayley Winkel and Jake Cooper, who both played at Robert Morris University, for encouraging their college teammate to join them for the summer.

"His life is football and, when he was struggling to find a club for the summer, he inquired about FC Buffalo," recalled Winkel. "I gave my honest opinion and told him it would be a good spot for him this summer. The training, fans, and player treatment were all top notch. This was all last minute but I think he was satisfied with what I told him about the club and that he decided to come."

McIvor, an alumnus of Trinidad & Tobago youth national teams, credited his RMU teammates for easing the transition to Buffalo.

"It's always good to play with Coops and Bayley," the three-time All-Northeast Conference selection said. "The quality they have within them on the field, it boosted me a bit as they helped me come here, brought me in and made me feel comfortable from day one."

It wasn't always harmonious between Winkel and McIvor, two attack-minded midfielders who prefer to have the ball at their feet. Winkel, a product of Toronto FC's academy and transfer from Drexel University, remembers the uneasy situation.

"We would clash in training at times and didn’t really engage in any conversation off the field," Winkel said. "I think it was two very technical players both trying to be the alpha male of the team. That showed in the first season we played together when we both didn’t put up the points we wanted."

Fast forward to their senior campaigns, however, and the McIvor-Winkel-Cooper triumvirate buoyed a squad that was otherwise disappointing, finishing with a 4-11-3 record. Learning to coexist was a process for McIvor and Winkel, but the pair managed to establish a friendship off the field and learned how to work together on it, the latter said.

Winkel paced the Colonials with 10 goals - good for half the team's total tally - while McIvor's eight assists and Cooper's five helpers led the way. Not surprisingly, McIvor and Cooper evenly split eight assists for Winkel's 10 markers.

Knowing Winkel's acceleration and speed to exploit space behind defenses, McIvor's vision and early through balls were the Colonials' most dangerous weapon.

"Keane wants the ball to his feet rather than space," Winkel explained. "His strength and dribbling ability (some of the best I’ve played with) enables his to draw multiple defenders in then his vision over the top is fantastic.

"The amount of times he gets a ball from the holder into his feet, turns to his left foot and chips a through ball to me is crazy. Watch for that next game."

The Robert Morris connection has already paid dividends for the Wolves. Winkel, along with Akean Shackleford, is a favorite of the Situation Room, FC Buffalo's small but devoted supporters group. And if McIvor continues to generate scoring chances, he'll quickly find himself in the same boat.

*FC Buffalo has added two local NCAA Division I players to the squad before Friday's tilt. Bautista Pedezert, arguably the most talented player at Niagara University, was expected to join the Wolves last season but instead returned home to Argentina.

Pedezert's presence will immediately bolster the center of the midfield and, while he might not start off the bat, he'll help the Wolves coaches manage the minutes of McIvor and Cooper.

Steven Casey has been brilliant with his opportunities this season, earning a place on Top Drawer Soccer's NPSL Team of the Week, while Jeremy Figler is the most experienced of the lot, even if he's struggled at times this campaign.

*Greater Binghamton FC is among the worst teams in the entire NPSL this season. With an 0-8 record with three goals for and 52 against, a side that once played with pride has been beaten off the pitch over and over again this year.

Although it may seem like goal differential would matter in all matches, it doesn't - the National Premier Soccer League tiebreakers focus on head to head results between teams tied at the end of the regular season, then goal differential between those two specific teams.

Even so, expect FC Buffalo's offense to come out guns-a-blazing on Friday at All-High.

What players are not being talked about enough for the NBA Draft?

Kelsey Araujo has taken United Women's Soccer by storm this summer. It was only fitting for the FC Buffalo Women winger to rise to the occasio…

Nikki Bartholomew's squad will have to win two postseason matches this weekend to become United Women's Soccer East Conference champion – and earn a trip to the national finals in Round Rock, Texas.

During a summer of relentless difficulty, FC Buffalo's Ali Shawish can cherish memories from at least one night when hope pierced through darkness.

Keane McIvor, in white, is pictured playing for Robert Morris University. He's made a significant difference for FC Buffalo since being cleared to play three games ago. (via Robert Morris)