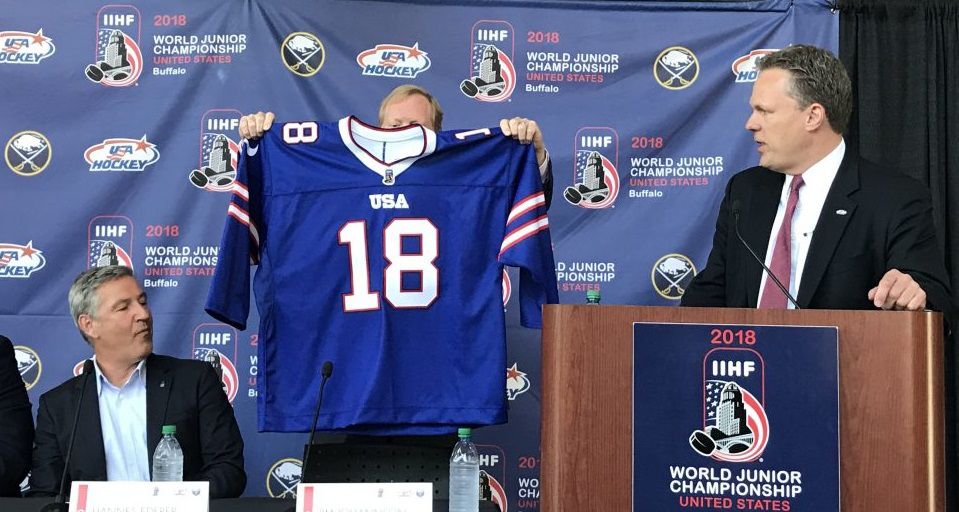 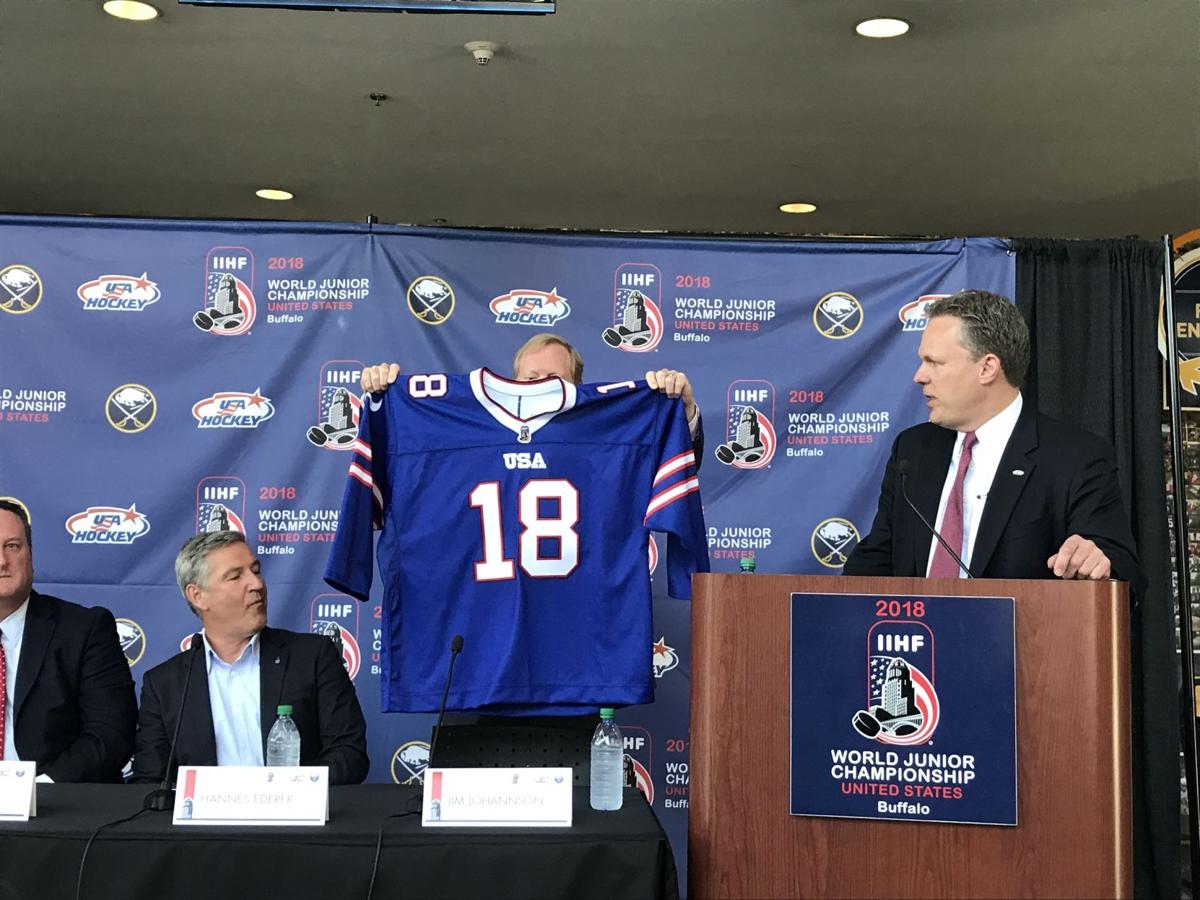 The Team USA juniors will wear this special Bills-esque jersey at New Era Field in December. 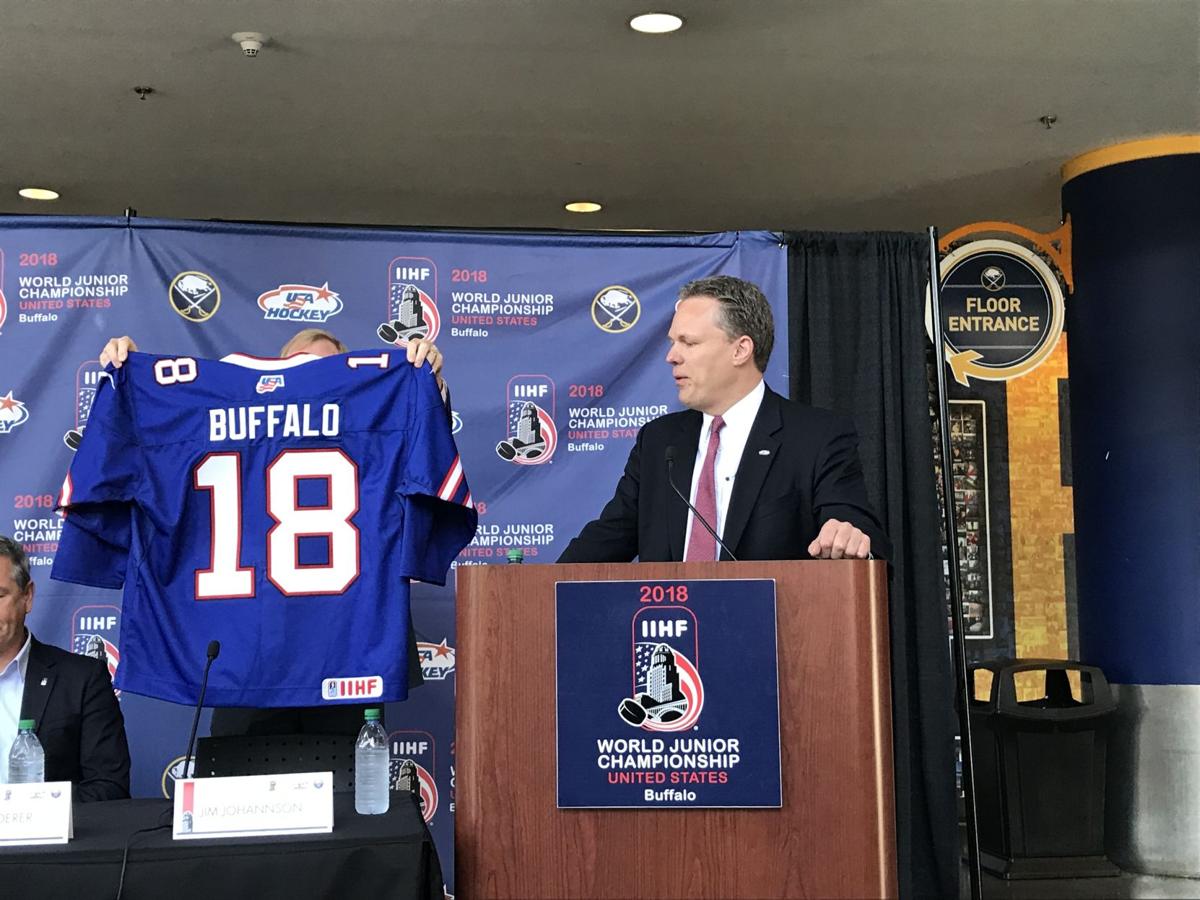 Here's a look at the back of the Bills-esque commemorative sweater:

The tournament will run Dec. 26-Jan. 5, with games in the KeyBank Center and HarborCenter.

"It's the second time in the history of the IIHF that we have this game in a stadium," said Hannes Ederer, IIHF deputy general secretary. "In total we have the opportunity to break the record for the world junior attendance ... we can, we could, we should aim for that."

This year, some notable names taking place include Brady Tkachuk, Quinn Hughes and Joel Farabee. USA Hockey assistant executive director of operations Jim Johannson estimated 8-11 future first-round picks will be on the ice for the game.

"The players will tell the story, both from the game and the history it's gonna bring," Johannson said. "There were 10 first-rounders on the ice for that game in 2015.

"I think the unique part of this event are that kids are still coming from all over the country," he added. "I'll make a prediction right now that you'll see 18-20 states [represented] at the game."

Tickets go on sale for the game on Aug. 16. Prices are $5 for season-ticket holders and $10 for the general public.

"It'll be exciting times for everybody," said Mike Bertsch, USA Hockey assistant executive director of marketing, communications and events. "I think everybody's come to understand the talent that's on the ice for this game. ... We've had some outstanding players in the past who have participated in this game."

Sabres VP of administration Michael Gilbert also announced two new ticket packages on top of the full 31-game package currently available. Fans will be able to purchase eight-game and 12-game packages starting at 10 a.m. on June 23 through BuffaloWorldJuniors.com and the Sabres' box office. On June 22, there will be a pre-sale on the packages for USA Hockey members, Sabres and Bills season-ticket holders and My One Buffalo members.

In more than 1,200 games, Staal has 436 goals and 585 assists for 1,021 career points. He is seventh among active players in games and sixth in points

Can Ralph Krueger's positive approach ignite change for the Sabres?

“I understand people who love the Sabres want that change of position in the standings, but they need to know if you build sustainable success it is also a grind to get it right," the coach says.

5 takeaways from Eric Staal, who plans to be 'impactful' scorer, mentor for young Sabres

The 35-year-old center was dealt to Buffalo from Minnesota in exchange for forward Marcus Johansson.

New Sabres general manager will have to creatively build a playoff contender around a frustrated superstar center.

Krueger and his staff accepted a 20% pay reduction from April 1 until July 13 before declining a subsequent request for a 25% cut.

'You could see it right from the get-go': A look back at Jack Eichel's first Sabres' training camp

On a picturesque summer day in July 2015, 17,115 fans filled the arena next to the Buffalo waterfront to watch as Jack Eichel donned a Sabres jersey for the first time on home ice.

Mair has been a player development coach with the Sabres for the past five years, while Weber spent the previous two seasons as an assistant coach with the Ontario Hockey League’s Windsor Spitfires.

The Team USA juniors will wear this special Bills-esque jersey at New Era Field in December.