The Wraparound: Sabres fall apart, shut out again in Jack Eichel's return
0 comments
Share this
Support this work for $1 a month
1 of 2 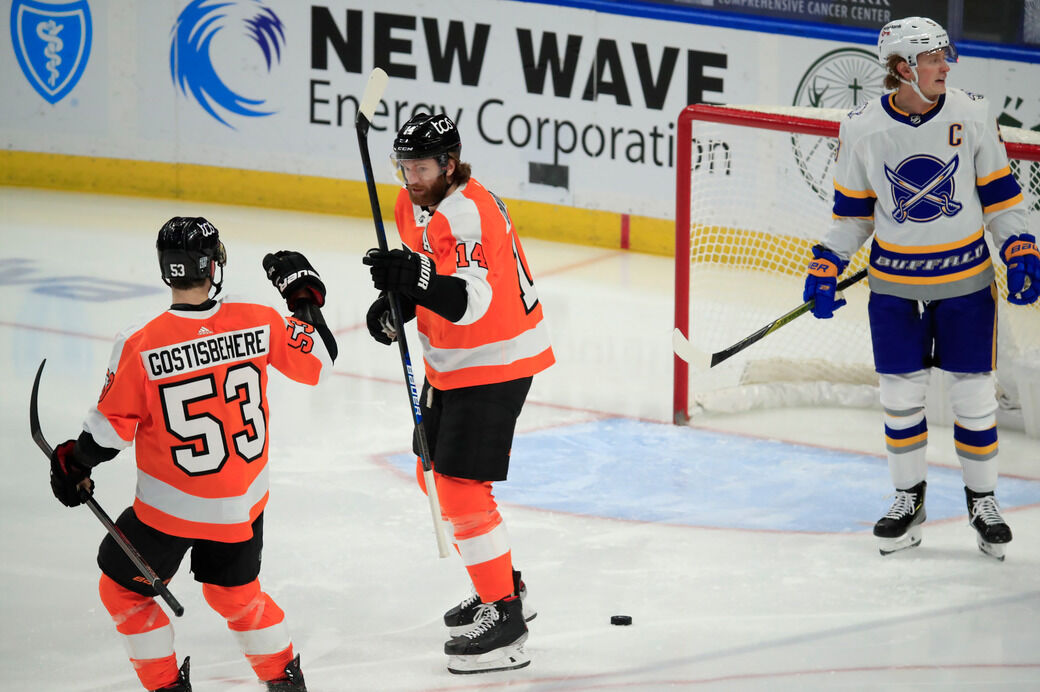 Philadelphia Flyers Shayne Gostisbehere (53) congratulates Sean Couturier on his goal against the Buffalo Sabres during the second period at the KeyBank Center on Sunday, Feb. 28, 2021. (Harry Scull Jr./Buffalo News) 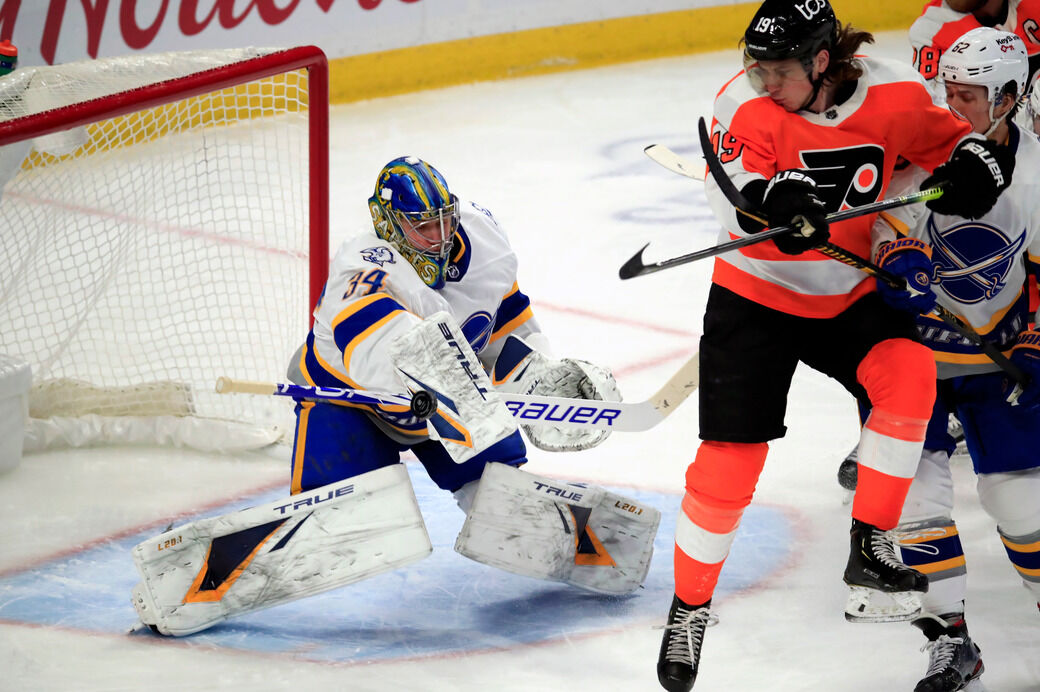 Buffalo Sabres goaltender Jonas Johansson makes a save against the Philadelphia Flyers during the first period at the KeyBank Center on Sunday, Feb. 28, 2021.

For seven minutes Sunday afternoon, the Buffalo Sabres executed crisp tape-to-tape passes and played with the tenacity Ralph Krueger wanted in the second game of a back-to-back.

With Jack Eichel in the lineup after a two-game absence, the Sabres did not allow a shot on goal for the first seven minutes and peppered Philadelphia Flyers goalie Carter Hart during an early power play.

Then, Krueger watched from the Sabres’ bench as it all fell apart again.

The Sabres had zero shots on net for the final 11:46 of the first period and allowed three goals in the second of a 3-0 loss to the Flyers inside KeyBank Center. Buffalo, now 6-10-3 and 10 points out of the last playoff spot in the East Division, has gone 2-6-1 in nine games since the two-week Covid-19 pause.

The Sabres were shut out in consecutive games for the first time since it occurred in three straight games from March 9-14, 2019.

"For all the change that has occurred during the nine-year playoff drought in Buffalo, the 3-0 loss to the Philadelphia Flyers on Sunday resembled so many games in recent years," writes Lance Lysowski.

Jonas Johansson, the backup goalie with Linus Ullmark out at least one month, made 35 saves while making his first start of the season. The promising start for Buffalo gave way to another collapse, as the Flyers (11-4-3) scored two goals in a span of 1:15 early in the second period.

Sean Couturier and Michael Raffl struck first for Philadelphia, and James van Riemsdyk pushed the lead to 3-0 by tipping in a shot from Joel Farabee at 15:23 into the second period. The lead felt insurmountable because the Sabres entered Sunday with an 0-8-1 record when trailing after two periods.

Breaking even: The two teams were scoreless at the end of the first period, snapping an ugly trend of the Sabres allowing an early goal. Buffalo has a minus-7 goal differential in the first period this season. The Sabres have led at the first intermission only four times in 19 games.

Uneven performance: The Flyers went the first 7:08 of the game without a shot on goal. The Sabres, meanwhile, had four shots during an early power play, including a hard wrister by Eichel from the left-wing circle.

When the Sabres’ offense went cold, their only scoring chance in the latter part of the first period occurred when Curtis Lazar rang a shot off the crossbar with 7:21 remaining. The Sabres gave up nine shots in a row, including four on a Flyers power play.

Inside the NHL: Birth of Sabres featured as new book tells stories of jerseys, names

Did you know that the Knoxes' polo pinnies were the inspiration for the Sabres' blue, gold and white color scheme?

Limited opportunities: Jeff Skinner played a team-low 2:24 at even-strength in the first period, registering one shot attempt and 40 seconds on a failed power-play in which Casey Mittelstadt turned the puck over on a zone entry.

Quick strike: The Flyers took the 1-0 lead 22 seconds into the second period when Farabee’s shot created a rebound that Couturier shot past Johansson. Eichel was unable to tie up Couturier in front of the Sabres’ net. Buffalo has scored first in only seven of 19 games this season.

Big loss: Raffl scored for a 2-0 Flyers lead by tipping in a point shot by defenseman Robert Hagg at 1:37 into the second period. Lazar lost a faceoff to Raffl and the puck went to defenseman Philippe Myers, who set up Hagg for the shot at the blue line.

Highlight: The Sabres’ best scoring chance through 40 minutes occurred with 7:04 remaining in the second period, when Taylor Hall made a perfect saucer pass to Okposo during a 2 on 1. Hart, though, used his left leg pad to stop Okposo’s shot.

Signs of life: Hall earned a shot from the slot by forcing a turnover in the defensive zone early in the third period, but Hart made the save. The Sabres’ power play has also gone cold, although it registered three shots in the third.

The Flyers had only four shots on goal in the third period.

Mike Harrington: 'As the Sabres Turn' is a recurring show that just won't stop

At Sabres games these days, "we need some calliope music like you hear in the old big tops. Because right now, this team is just one giant circus," writes Mike Harrington.

Lineup: Defenseman Colin Miller was a healthy scratch for the first time this season. Miller has two goals with three assists for five points in 18 games. Rookie forward Dylan Cozens was also scratched for the first time since Jan. 22.

Roster moves: Prior to puck drop, the Sabres assigned defenseman Jacob Bryson to the taxi squad and defenseman Casey Fitzgerald to Rochester. Additionally, Davidson was elevated to the active roster and winger C.J. Smith joined the taxi squad from the Amerks.

Next: The Sabres are scheduled to practice Monday in preparation for their game Tuesday in Madison Square Garden against the New York Rangers. Buffalo will play five consecutive road games and is not scheduled to play again at KeyBank Center until March 11.

"It feels as if there's no way Ralph Krueger can be the coach of the Buffalo Sabres next year," writes Mike Harrington.

Sabres Notebook: First game with fans is Tuesday in MSG

The Buffalo Sabres will play a game in front of fans for the first time in nearly a year Tuesday when they meet the New York Rangers at Madison Square Garden.

Sabres game day: First order of business is simply to score a goal

The Sabres' shutout streak is at 125 minutes, 47 seconds heading into tonight's game.

The Buffalo Sabres were shut out again Sunday, falling to the Philadelphia Flyers 3-0 at KeyBank Center.

Philadelphia Flyers Shayne Gostisbehere (53) congratulates Sean Couturier on his goal against the Buffalo Sabres during the second period at the KeyBank Center on Sunday, Feb. 28, 2021. (Harry Scull Jr./Buffalo News)

Buffalo Sabres goaltender Jonas Johansson makes a save against the Philadelphia Flyers during the first period at the KeyBank Center on Sunday, Feb. 28, 2021.