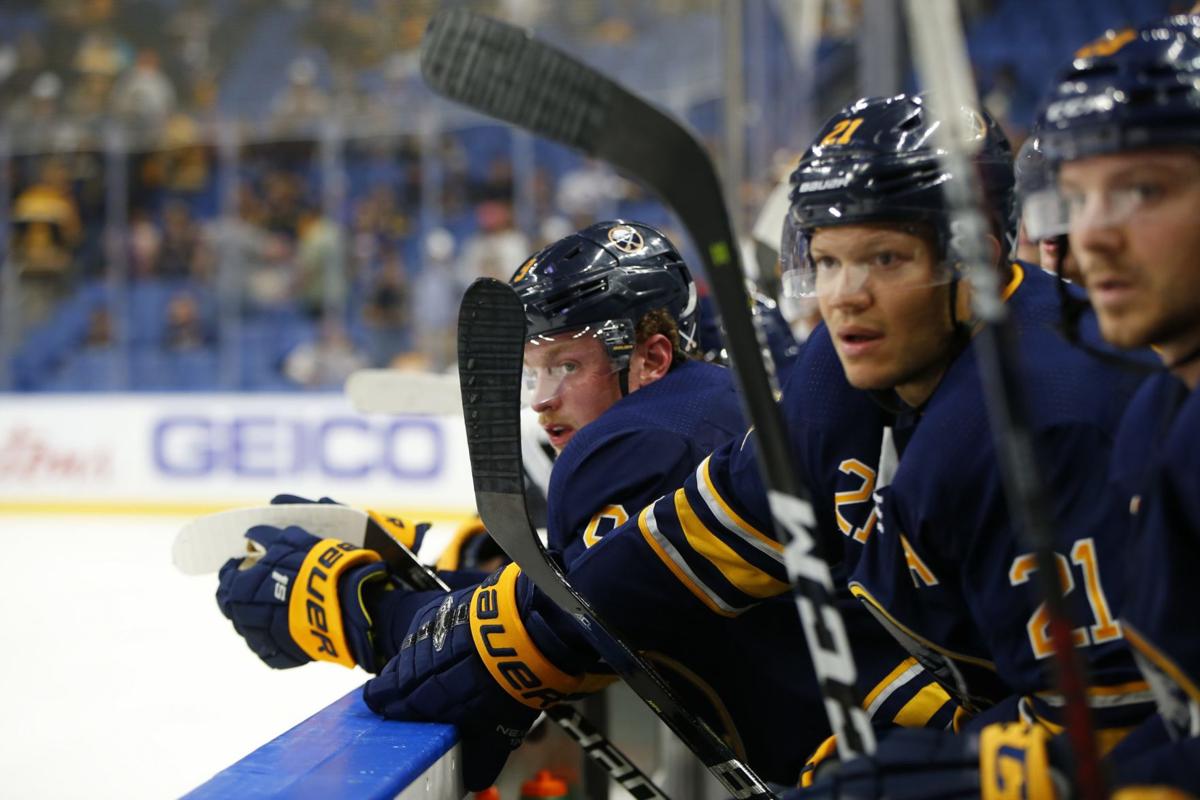 From left, Jack Eichel, Kyle Okposo and Sam Reinhart watch from the bench during a game against the Tampa Bay Lightning. (Harry Scull Jr./Buffalo News) 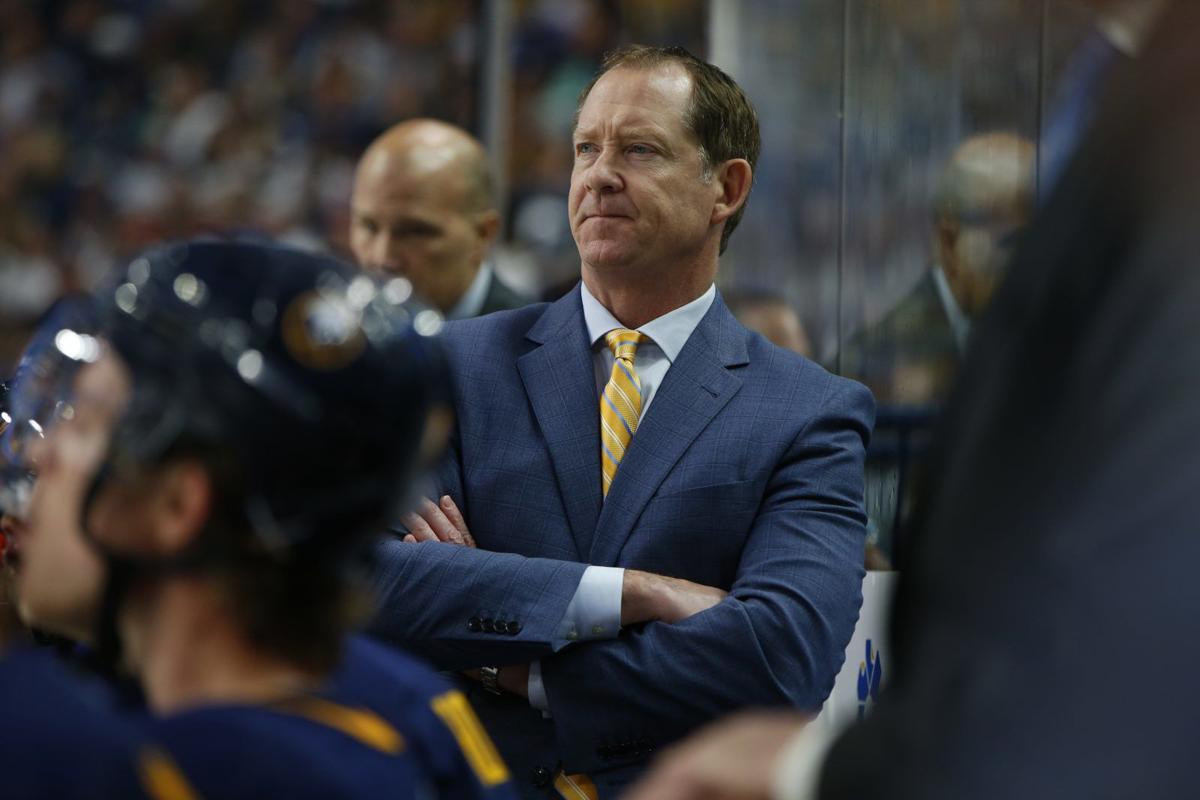 Did the calendar really flip to a new season? Did the Buffalo Sabres really change out nearly half their roster for the second straight year? Did the NHL standings really reset to zero and not still show the Blue and Gold in 31st place?

Hard to tell by watching — and listening — Thursday night in KeyBank Center.

The Sabres were drubbed, 4-0, in their season opener by the Boston Bruins, who got four assists from star winger Brad Marchand and 32 saves from backup goaltender Jaroslav Halák to bounce back from Wednesday's 7-0 disaster in Washington.

The Sabres got a whole lot of nothing. Not even the debut of No. 1 overall pick Rasmus Dahlin could make any difference.

They made mistakes with the puck, they lost coverages in the defensive zone, they didn't convert the few good opportunities they had to score and created virtually no traffic in front of Halák.

The result was they got booed off the ice at the end of the first period while trailing, 2-0, and got crushed at the end of 40 minutes while in a 3-0 hole.

"Was it disappointing in front of a good crowd that was here to support us? You're dang right," said a clearly agitated coach Phil Housley. "It's disappointing. So what can we control? We can control how we come to the rink tomorrow and work because we are not going through this again."

For the record, Housley made sure to emphatically emphasize the "not".

His players empathized with the paying customers' group statement. After all, Buffalo won just 11 games downtown last season in what was its worst season at home in 46 years. This one didn't start any better.

"It's not easy. Obviously, we want our fans to appreciate our effort," said Jack Eichel, whose first game as captain closed with the empty result. "In the same sense, we've got to be better for them and put a better product on the ice. We've got to bear down, score goals.

"We've got to bring it for them. Their fuse is a bit short for us and rightfully so. We haven't played well the last few years so that's on us to put a better product on the ice."

Eichel bears big responsibility in this one. The game was scoreless when he streaked down the right wing and looked to have a clear lane for a shot on Halák — only to try an ill-fated pass to his left to Jeff Skinner.

The Bruins took the puck and Zdeno Chára found more open ice than any 6-foot-9 player should ever find in taking a Marchand pass and beating Carter Hutton at 6:33 of the first period.

"I would have liked to have that one back for sure," Eichel said. "Think I probably should have shot it. I know I had 'Skinny' busting in the back door, but credit to them. They dove and got a stick on it."

"We've got to think shot," Housley said. "We overpassed the puck way too much tonight. That's not our game. Our game is straightforward, playing north, get pucks behind the other team, shoot the puck and then we've got to get net-front presence."

The Sabres finished with 32 shots in the game, 15 in the third period. But they only had six in the first period, as Housley's ire was properly directed.

The team gets right back to practice Friday to prepare for Saturday's game against the New York Rangers. You wonder how many of the fans are going to come back until they start to see some progress.

"I don't blame them. We've got to prove it to them," said alternate captain Kyle Okposo. "They only know what we put on the ice at 7 o'clock most nights. They don't know what's been transpiring and we need to show them what it is.

"We need to play better. That's something we're going to learn how to do. I'm looking forward to getting better and giving these fans something to cheer about."

Next steps for Jack Eichel, Sabres uncertain with 12-week period of rest complete

Eichel, 24, the Sabres’ captain and star center, begrudgingly finished the recovery plan provided to him by the Sabres’ doctors, despite his public preference to undergo surgery on a herniated disk in his neck.

Hamburg's Quentin Musty to go No. 1 to Sudbury Wolves in OHL draft

Quentin Musty wasn’t going to sit idle while recovering from a shoulder injury.

Sabres opt to not sign center Marcus Davidsson, a second-round draft choice in 2017

One of Jason Botterill’s first draft choices as general manager of the Buffalo Sabres is free to sign with another NHL team.

From left, Jack Eichel, Kyle Okposo and Sam Reinhart watch from the bench during a game against the Tampa Bay Lightning. (Harry Scull Jr./Buffalo News)