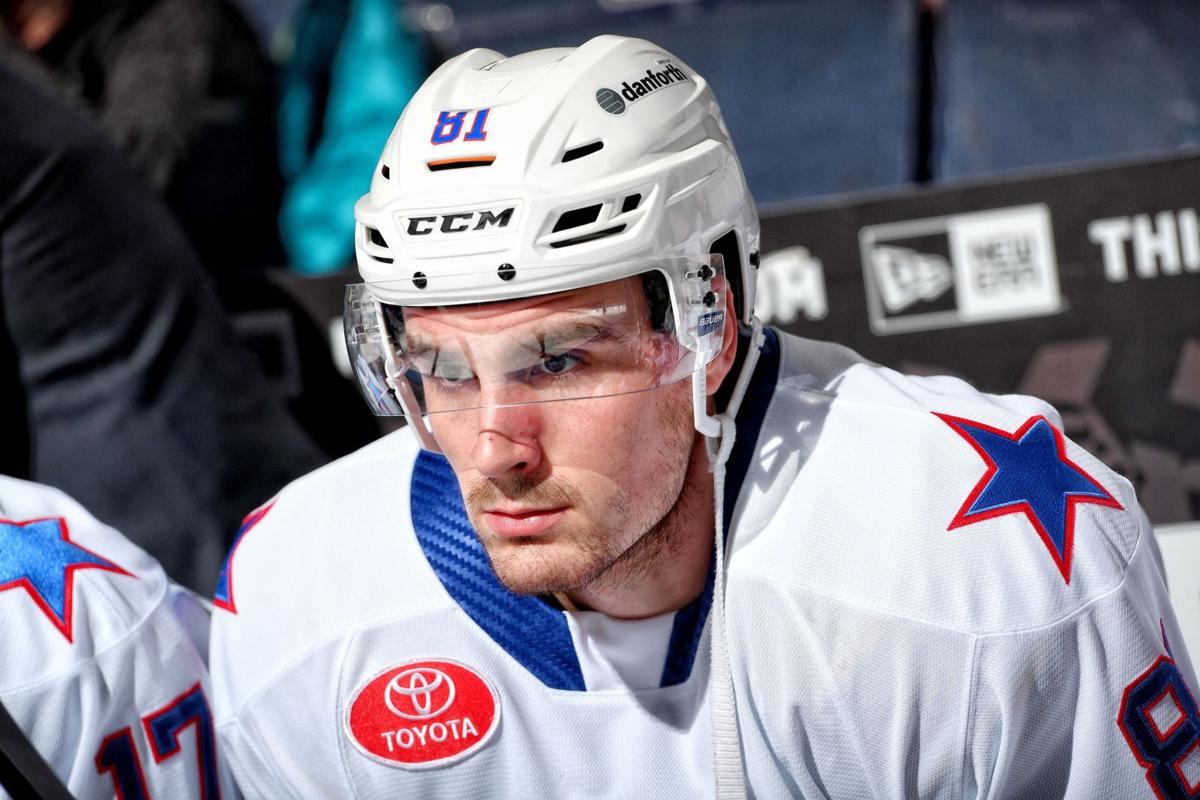 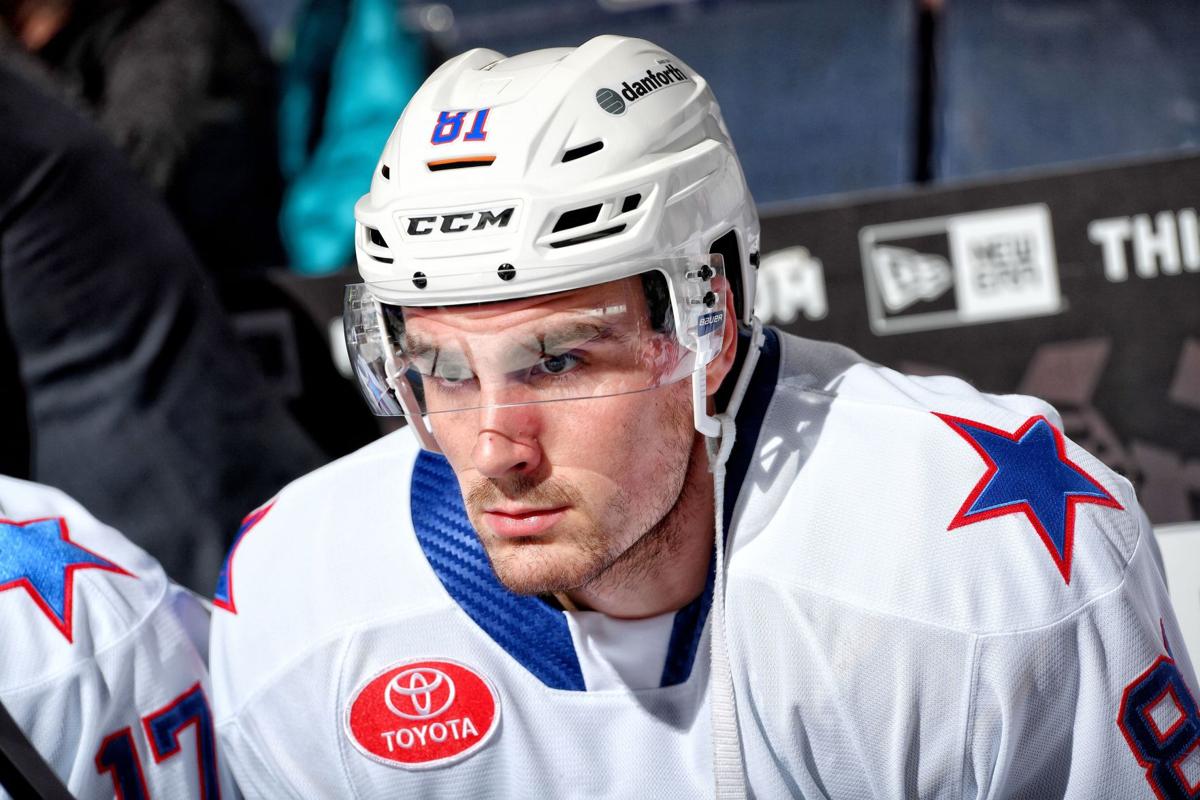 ROCHESTER – In barely a month, Buffalo Sabres prospect Brett Murray has morphed from a training camp invitee into one of the Americans’ regular wingers.

Murray has roared up the depth chart, earning action on a scoring line and the power play. In nine games, he has scored two goals and seven points.

“What you want a young guy to do is punch a hole in the lineup, and he’s done that,” interim Amerks coach Gord Dineen said following Wednesday’s 4-3 win against the Syracuse Crunch in Blue Cross Arena.

It’s hardly surprising, of course, that a former fourth-round pick could make an impact early in his American Hockey League career.

But Murray, 21, took a different path to the Amerks and pro hockey, leaving Penn State after a season-and-a-half and returning to the junior United States Hockey League.

“Playing time and the whole situation, I wasn’t progressing,” Murray said in September of his 33-game college career. “Personally, it wasn’t the best situation for me.”

Still, the Sabres weren’t itching to sign Murray, whose conditioning wasn’t up to pro standards.

“I was in shape for the level below in the USHL,” said Murray, who was selected 99th overall in 2016 by the team’s old regime.

So the Sabres challenged Murray to develop his body. If he improved his habits, they told him, he could earn more opportunities.

“I trimmed down the body fat, put a little more muscle on, came back and I feel I’m in a very good spot now, personally, with my conditioning level,” said Murray, who is listed at 6-5 and 235 pounds.

Murray showed progress in transforming his body at development camp in June, so the Sabres invited him to rookie camp. He parlayed an impressive showing there into an invitation to Amerks' training camp.

“Mentally, it was a little tough,” said Murray, who acknowledged he had backup plans. “I just had to battle through it and keep working.”

Murray, one of the most intriguing talents in Rochester, could earn a two-way contract if he keeps producing.

“He’s recognized the opportunity that he’s getting and he’s really driven,” Dineen said. “Another guy with size and … very good hands. When he’s taking the puck to the net, he’s really a really effective guy.”

Only one teammate, 6-foot-7 winger Tage Thompson, is taller than Murray, who can be hard to take your eyes off. He moves well for a big man and utilizes his size.

“A lot of time, big guys, to get their feet moving is one of the things you always have to coax out of them,” Dineen said. “He’s really got his feet moving, he’s a hard guy to play against.”

After starting Murray on checking lines, Dineen recently promoted him to left wing beside center Kevin Porter and Andrew Oglevie.

“He’s really played a gritty game,” Dineen said of Murray. “His wall play has been really good. He’s got … poise in the tough areas.”

Murray credits the Amerks’ leadership group – “The core guys here, they’re easy to turn to,” he said – for helping him adjust to the AHL so easily.

“The first couple games, I wouldn’t say I was scared, but it’s always nerve-racking when you’re at a new level and you’re new to the team, new to the league,” he said. “But I turned to those older guys.”

Murray, who assisted on Eric Cornel’s winning goal Wednesday, said he has relied heavily on Porter, bouncing ideas off the captain “every day in practice and even in games.”

After Scott Wilson suffered a lower-body injury early, Malone moved up to left wing beside Thompson and center Rasmus Asplund.

“He’s been a really good – I don’t like to use the term – utility guy, in that he’s moved up and down our lineup,” Dineen said of Malone.

Malone has compiled three goals and seven points during his seven-game point streak. The West Seneca native was a healthy scratch twice early in his scoring run.

Dineen had no update on Wilson following the game.

The Amerks host the Cleveland Monsters on Friday before playing a road game against the Utica Comets on Saturday.

Though it’s uncertain when or if the AHL will play games in 2020, Adams’ handling of Rochester, starting with the selection of a new coach, could have a significant role in the Sabres’ short- and long-term success.

How the Sabres use analytics: Q&A with Jason Nightingale, assistant director of scouting

The 42-year-old’s role expanded to director of analytics in 2017 and his promotion last month will have him work with Jeremiah Crowe, the newly appointed scouting director, to increase the Sabres’ use of data.

The strategy annoyed scouts from other teams, produced more draft failures than success stories and drew the ire of fans.

Murray, a 6-foot-5 winger, totaled nine goals with 15 assists for 24 points in 55 games with the Rochester Americans this season.

The strategy annoyed scouts from other teams, produced more draft failures than success stories and drew the ire of fans.

His son, Eric, tweeted Sunday, "My dad is back in his fight against cancer due to a resurgence of this terrible disease. We are praying for him and he will continue to fight hard #HawerchukStrong"

The winner of the trophy is expected to be revealed during the conference finals.