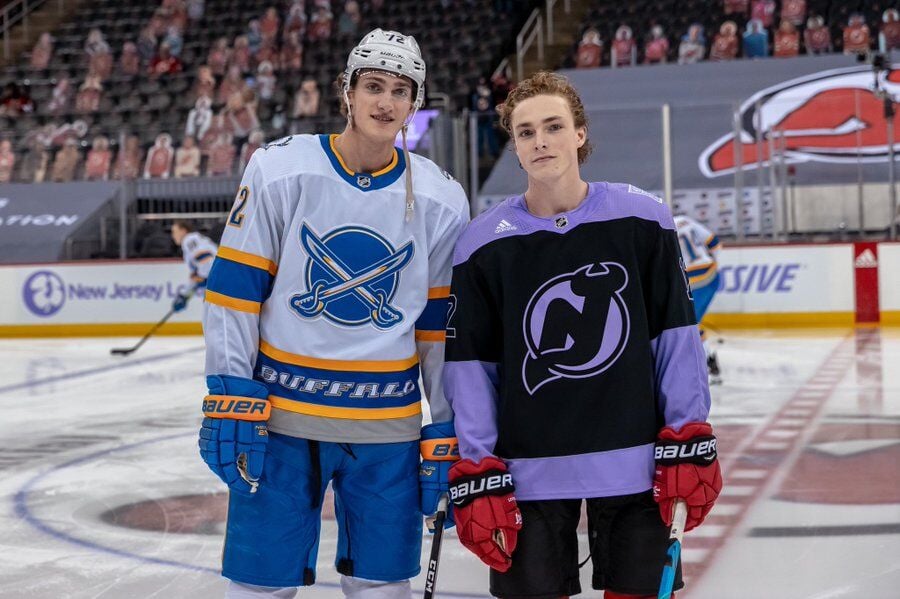 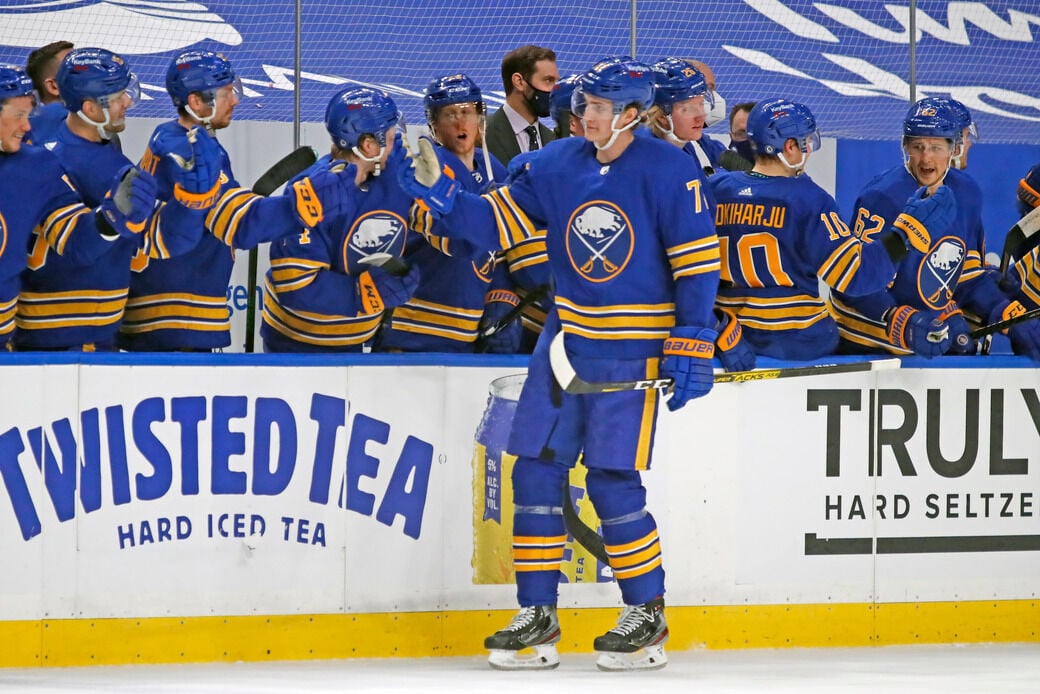 It was a brother act Tuesday night in New Jersey with quite a twist. Sabres winger Tage Thompson was going against Devils counterpart Tyce Thompson – and it was Tyce's NHL debut.

"It's awesome. Obviously I'm very excited for him, something he's worked very hard for," Tage Thompson, 23, said prior to the game in Prudential Center. "I remember my first game and the excitement, so I'm excited I get this to share this opportunity and this moment with him."

Tyce Thompson, 21, had 11 goals and 25 points for Providence College in 25 games this season after posting career-best numbers (19-25-44) last year, when he finished third in the NCAA in scoring.

"That's the best way you can draw up a debut," Tyce Thompson said. "To be able to play against my brother makes it that much more special. Speechless really, I can't describe how I really feel. It's just really exciting."

Tage Thompson said their mother was expected to attend the game. Less sure was the attendance of their father, Brent, who is in his eighth year as the head coach of the AHL's Bridgeport Sound Tigers, the top affiliate of the New York Islanders.

"From a very young age, it's something we knew we wanted to do was play in the NHL," Tage Thompson said. "Now that that dream is becoming a reality, all the sacrifices for my mom and the stuff she had to do, to watch us on the same ice now has to be a pretty rewarding feeling for her."

On top of his solid season, Linus Ullmark has become a shootout dynamo

With a shootout victory against the New York Rangers on Saturday, Ullmark improved to 33 of 38 in his career, and his .868 save percentage took over first place all-time in the NHL for goalies with at least 10 shootouts.

Tyce Thompson skipped his final year at Providence and signed his entry-level contract March 24. He was the Devils' fourth-round pick in 2019 and played three years at Providence, where he was a teammate of Buffalo defenseman Jacob Bryson on the Friars' 2019 Frozen Four team that played in KeyBank Center.

"That is really exciting," Granato said. "I got to see both Tage and Tyce at a very young age. When I first saw both of them play, it was really easy for me to see the potential was there. Knowing the family and having coached Tage at the amateur level, this is pretty neat to be a part of."

Tyce Thompson said he got the word Monday from Devils coach and former Sabres bench boss Lindy Ruff that his debut was happening Tuesday. He got to take the solo lap without his teammates to start the warmup prior to the game. He then briefly posed at center ice for a photo with his brother.

"He said, 'Just enjoy it. It happens once. Just be excited, enjoy it and play hockey,' " Tyce Thompson said of Ruff's message. "I'm going to try to take it all in."

No news on Hutton, Eichel

Granato said he had no new information on goalie Carter Hutton (lower body) and captain Jack Eichel (upper body). Both remain week to week, but the team is hopeful they can return to play this season.

"They are exactly the same thing we said a couple weeks ago," Granato said. "We expect both of them to have the opportunity to come back and nothing has changed in that regard and we feel the same in both cases."

University of Wisconsin winger Linus Weissbach, the Sabres' seventh-round pick in 2017, has signed a two-year, entry-level deal with the club rather than pursue free agency this summer. Terms were not disclosed and the contract begins in the 2021-22 season.

Weissbach, a 5-foot-8 native of Sweden, had 12 goals and 41 points in 31 games for the Badgers this season. Wisconsin finished 20-10-1, but was an upset victim at the hands of St. Cloud State in the first round of the NCAA Tournament.

Weissbach was a second-team All-Big Ten selection while finishing second in the NCAA in assists (29), third in points and eighth in points per game (1.32). He was named the Hockey Commissioners Association's men’s hockey player of the month for November.

Wisconsin is coached by longtime NHL player Tony Granato, the brother of Don Granato. Tony Granato gave Weissbach top-line minutes this year on a trio that included Cole Caufield, Montreal's first-round pick at No. 15 overall in 2019.

Weissbach becomes the fifth member of the Sabres' 2017 draft class to sign with the team, joining Casey Mittelstadt, Ukko-Pekka Luukkonen, Oskari Laaksonen and Jacob Bryson. The only unsigned player is second-round pick Marcus Davidsson, who has had an injury-plagued career in Sweden.

The Wraparound: Sabres extend point streak to five games by squeezing past Devils

Rasmus Dahlin and Casey Mittelstadt each collected two points and combined on the game-winning goal as the Buffalo Sabres held off the New Jersey Devils 5-3 on Tuesday in Prudential Center.

The Sabres endured a Covid-19 outbreak in February that paused and eventually derailed their season.

Mike Harrington: Major battles ahead for Sabres against marquee foes

"Let's see if the Sabres can at least get some lessons and a few points out of them that they might remember come training camp in the fall," writes Mike Harrington.