The Buffalo Sabres have opted to slow down the fast-forward track for Ukko-Pekka Luukkonen.

Observations: Not much help for Ukko-Pekka Luukkonen as Sabres fall to Blue Jackets

Ukko-Pekka Luukkonen probably needs some more time in Rochester and maybe that's not a bad thing.

Although the big Finnish goalie was drafted in 2017, he's only 22 years old and has played just 52 professional games in North America. And only 25 of those have come in the AHL, the top developmental league on this side of the Atlantic.

The Sabres are hopeful the Rochester Amerks can have a playoff-caliber season in 2021-22 and they want Luukkonen to have a regular role in it. So after two NHL preseason games, the club sent its top goalie prospect to Rochester along with five others Tuesday morning.

Luukkonen lost both of his starts in the preseason, posting a 5.08 goals against average and .836 save percentage. He had one solid period in each game, stopping all 18 shots he faced in the first period of a 6-2 loss to Detroit and all nine shots against him in the third period of Monday's 5-3 loss to Columbus in KeyBank Center.

In between, however, he stopped only 24 of 34 shots in the other four periods he played. Luukkonen was in a 5-1 hole after two periods Monday and the Sabres opted to keep him in the game and see how he would respond to the situation.

"I thought it was very progressive, in a progressive way," coach Don Granato said when asked about Luukkonen's camp. "A great camp that was another level of pressure for him to perform. He played (four NHL games) last year. And like most players, like any competitive player, was coming here to earn a spot. And in having that, that burden of going into these games with that, I thought the third period was big for him last night, to come back and fight."

Also sent to Rochester with Luukkonen were AHL all-star defenseman Oksari Laaksonen and forwards Linus Weissbach, Matej Pekar, Ryan MacInnis and Sean Malone, the West Seneca native and Nichols product. The Sabres have to wait for MacInnis and Malone to clear waivers on Wednesday, and they also put defenseman Ethan Prow on waivers later in the day. He's also ticketed for Rochester.

The Amerks opened their training camp Tuesday in Blue Cross Arena. They start their preseason Friday night at Utica and host Syracuse at 3 p.m. Sunday. The regular season opener is Oct. 17 in Utica.

"He's a young guy with a lot of potential," Granato said. "I think the way he approached camp, and some of the things we tried to do from our side helped him evolve his game even further, one step further. So he's leaving here to go to Rochester to gain more experience, more time in the net, with a lot more experience than he had maybe a couple weeks ago."

Weissbach piled up three points in the third period, including the tying goal with 54 seconds left. In a 4-1 hole through 42 minutes, the Sabres pulled out a 5-4 shootout victory at Nationwide Arena as Jack Quinn's filthy deke accounted for the only goal of the skills competition.

Weissbach, in his first camp after signing his entry-level deal in the spring following four years at Wisconsin, made a good impression and had a three-point game in last week's preseason opener at Columbus.

"You don't know what to expect of a player jumping a level from college hockey to pro," Granato said. "He showed he has dynamic components to his game: Speed, skill, quickness, playmaking ability and evasiveness as well. He had that in college hockey, but you don't know if that translates to the next level. It did."

Left winger Axel Jonsson-Fjallby, 23, who was claimed off waivers Monday from Washington after playing the last three years at Hershey, arrived to take the morning skate in Buffalo Tuesday and then traveled to Pittsburgh.

Jonsson-Fjallby did not play while the team wrapped up clerical issues regarding his visa paperwork. He has not played in an NHL game after the Capitals drafted him in the fifth round in 2016.

"I'm so excited. I'm really happy about this opportunity," Jonsson-Fjallby said. "Just the fact that they claimed me shows that they believe in me and that's really good for me, good feeling."

The 6-foot-1 Jonsson-Fjallby totaled 22 goals and 38 points the last two seasons in Hershey. He played with Rasmus Dahlin for Team Sweden in the 2018 World Junior Championships in Buffalo.

"I'm going to try to bring speed to the game," he said. "I don't see myself as a half-wall power-play guy. I'm just trying to kind of bring the speed, play good on defense and penalty kill."

Tokarski, a 31-year-old who went nearly four years between NHL games, stopped 13 of 14 shots in the Sabres’ 5-4 shootout loss to the Pittsburgh Penguins in PPG Paints Arena on Tuesday night.

Dell allowed three goals on 15 shots in starting the preseason opener in Columbus.

As a child, Peterka aspired to bring a championship to Munich. Now, he wants to be the latest German-born player to make an impact in the NHL.

Sabres roundtable: Who takes on a prominent leadership role and other burning questions as camp starts

Lance Lysowski and Mike Harrington of The Buffalo News provide their opinions on five notable topics at the start of camp. 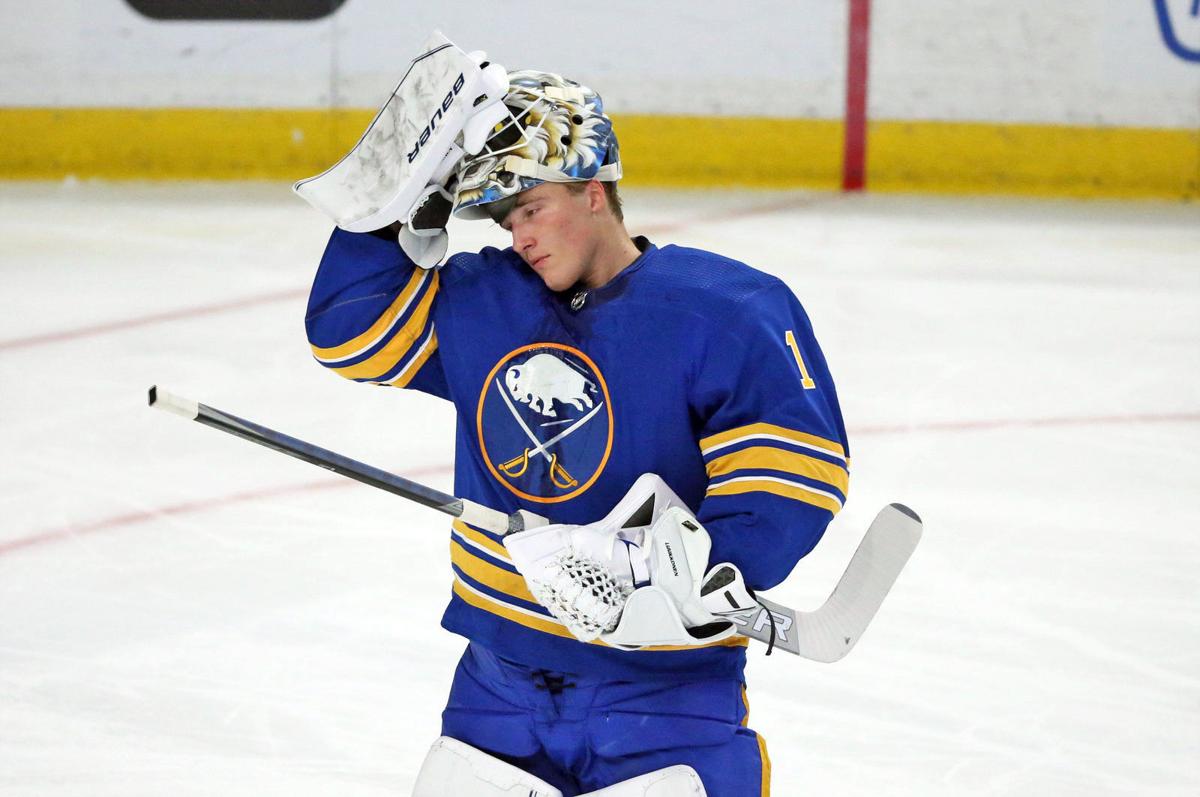 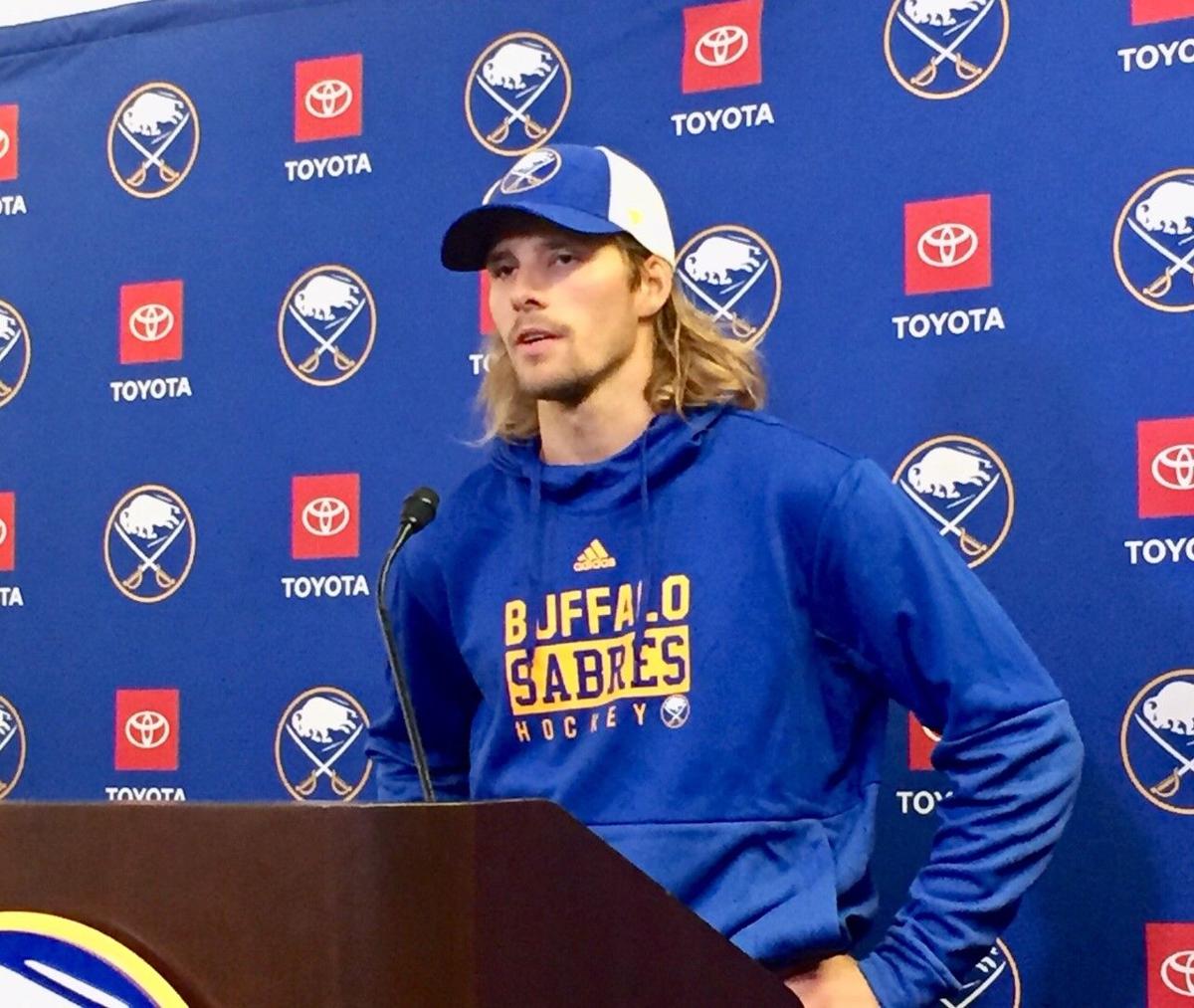