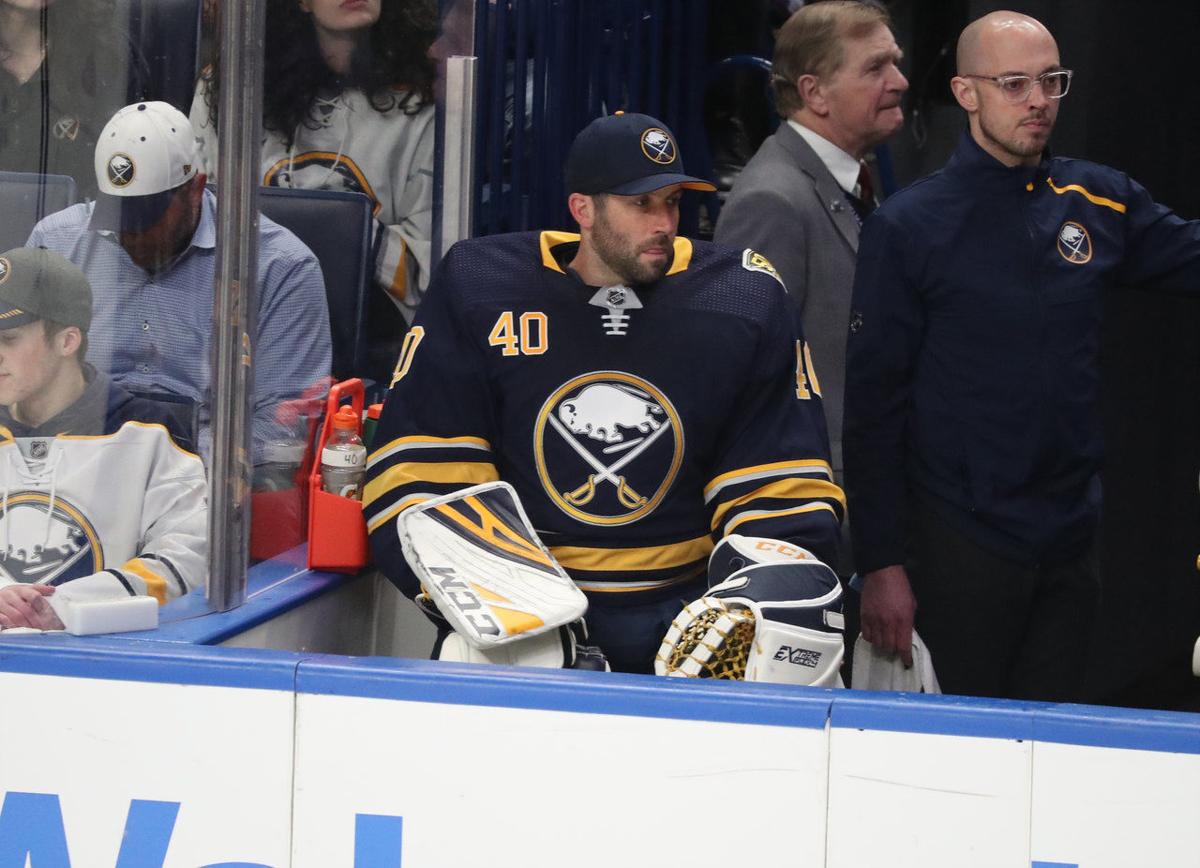 Carter Hutton did not want anyone to think he was making excuses during a season he describes as one of the most difficult of his career.

Hutton, a 34-year-old goalie, brushed off the notion that he endured bad luck while failing to win a game for the Buffalo Sabres over a span of 102 days. He didn't cite a high volume of high-danger scoring chances, either. In a matter-of-fact way, Hutton took responsibility for posting a 4.04 goals-against average and 0-8-4 record from Oct. 24 through Jan. 30.

"I underperformed," Hutton said during a phone interview with The Buffalo News. "I didn’t perform as well as I needed to at times, and obviously, I think it was 12 straight I was winless, which is really tough to swallow. ... It’s obviously something that needs to change. During the year, I can’t have these lulls and I’ll get back to doing what I do best. I’ve played in the league for a long time. I didn’t just forget how to play. I had a rough go with some stuff and we’ll get back to it."

Following some of those losses, Hutton mentioned to the media that circumstances "behind the scenes" were contributing to his struggles, but he declined to elaborate because he didn't want anyone to think he was looking for a crutch. However, when broached with the topic Monday, Hutton disclosed that an issue with his vision made it difficult for him to track the puck during a two-month stretch.

Even routine practice shots were troubling, he said. A suggestion from Sabres goalie coach Mike Bales led Hutton to seek treatment on what a specialist discovered was convergence insufficiency, a disorder in which a person's eyes don't move at the same time. Therapy throughout the season corrected the issue and helped Hutton win six of eight starts in February, a stretch that had the Sabres in playoff contention at the trade deadline.

"It started to come back around big time in January," said Hutton. The therapy "became part of my daily routine. I would do a ton of different eye training and things to get better at that. In the moment it was obviously tough. Now, moving forward, I learned a lot of skills to help improve that area and make my eye strength better and work on stuff. We weren’t sure what it was. It was something I managed throughout the season."

Hutton proceeded to earn six consecutive wins, including back-to-back shutouts against Dallas and Los Angeles, while posting a 1.65 goals-against average and .943 save percentage from Oct. 3 to Oct. 22. The remarkable stretch of play included a 134-minute, 22-second shutout streak and vaulted the Sabres to the top of the NHL standings.

It was the second consecutive season in which Hutton showed he is capable of cleaning up mistakes made by a young Sabres roster. He went 8-0 with a .936 save percentage during the Sabres' 10-game win streak in November 2018, which included victories over Montreal, Vancouver, Tampa Bay, Pittsburgh and San Jose. However, Hutton has not maintained that level of play over an 82-game season in Buffalo. He posted a 6-19-4 record and .900 save percentage in 29 games following the win streak.

After repeating that his medical diagnosis does not justify his winless stretch this season, Hutton outlined his summer mission to address any potential shortcomings in how how manages his energy levels between games and practices. Although Hutton's resume included 137 regular-season games when he signed with Buffalo in July 2018, his backup role in Nashville and St. Louis included mostly sporadic starts.

Hutton was comfortable in his starter role, he said, when he first noticed he was having trouble tracking the puck early this season. He didn't think much of the issue at first. Toiling through the minor leagues and NHL taught Hutton different methods to work himself out of a slump.

His first response was to take more shots in practice. When the problem continued, Bales approached Hutton and suggested a consultation with the Sabres' medical staff.

"It was strange. I was struggling during the season tracking pucks," said Hutton. "Simple drills during practice. It was frustrating in the sense that it didn’t affect my day-to-day life totally, but I’m doing things at high speeds and trying to be sharp."

Hutton in November saw Dr. Mark Lindsay, a chiropractor and soft-tissue specialist based in the Toronto area who has treated Sidney Crosby and Connor McDavid, and Dr. Mark Gordon, a vision therapist based in Kenmore. The doctors discovered Hutton's left eye was moving slower than his right, which caused a visual disturbance.

Hutton was prescribed a variety of at-home exercises to strengthen his eyes and improve convergence. He visited Gordon about every three weeks during the season to reassess and "add things to my toolbag," Hutton said.

Hutton didn't notice improvement until Jan. 11, when he allowed five goals on 34 shots during a 6-3 loss to Vancouver in KeyBank Center. During the following 14 games, Hutton posted a .906 save percentage and 6-7 record, including a 6-2 stretch in February while Linus Ullmark was out with a lower-body injury.

Hutton lost each of his final four starts of the season, but he gave the Sabres a chance to win on the road at Colorado, Vegas, Winnipeg and Philadelphia. His final stat line: a 12-14-4 record across 31 games and a career-low .898 save percentage.

"From the New Year on, I felt like I was coming back," said Hutton, who had a .915 save percentage at 5 on 5 this season. "I gave up five or six against Vancouver, but that was the first game I felt like I was myself. It was a game where I felt like I was getting back to normal. Hopefully it’s in the past and I can move forward from it."

Although Hutton expressed relief that his vision recovered, he plans to continue using the eye exercises. It is one aspect of an offseason regimen that could span nine months. Hutton plans to begin high-intensity workouts in July and likely won't start skating until August. He will again prepare for a prominent role in goal.

Ullmark will likely enter training camp as the starting goalie after posting a .930 save percentage at 5 on 5 in 34 games this season, but the 26-year-old has not played more than 37 games in a season and struggled on the penalty kill. Ullmark was out of the lineup for 17 games from Jan. 30 through March 5.

"I think Linus is a really, really, really good goalie," said Hutton. "I think he has potential to be a star and he’s a good teammate, a good kid. ... Moving forward, I obviously don’t know the playing situation. There’s obviously that competitive side of me, but I really don’t get too stressed about that. That stuff is out of my control. He’s a young guy and I want him to bloom into the No. 1 guy, but at the same time, I’m going to do everything I can to play, win and help turn this around."

There's plenty of time for GM Kevyn Adams to keep working the phones and get better in goal, too, Mike Harrington says.