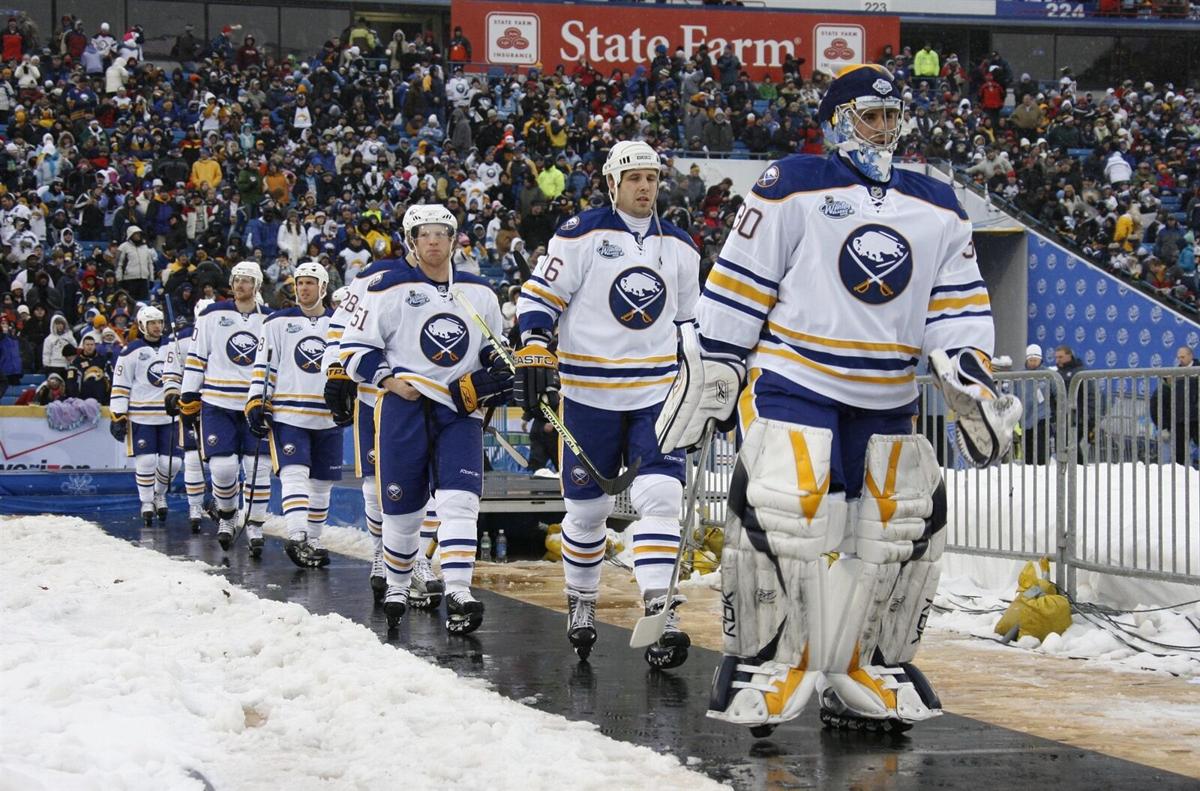 The Buffalo Sabres might be taking things outdoors for a game this season.

Nothing is official but multiple sources say plans are in the works for the Sabres and Toronto Maple Leafs to play an NHL Heritage Classic game at Tim Hortons Field in Hamilton, Ont., with March 13 currently a target date.

The teams are slated to play a matinee that day in KeyBank Center, but the game was notably absent from the Sabres' two half-season ticket options unveiled last week. Each plan included one preseason game and 20 regular season games; the regular season, of course, consists of 41 home games and not 40.

The Sabres would be the home team for the outdoor game, with Hamilton essentially equidistant from Buffalo and Toronto. But just like games vs. the Leafs in downtown Buffalo, it's likely much of the crowd would be in favor of the Leafs.

Mike Harrington: What can new agent Pat Brisson do for Jack Eichel now? A lot.

Brisson is the Scott Boras of hockey agents, a guy who has the big names and generates the big dollars, Harrington writes.

The Sabres referred all scheduling inquiries to the NHL. A league source said logistics are complicated because of uncertain border issues seven months out and the need to compensate the Sabres for the lost home game in Buffalo.

Ticketing issues would need to be worked out as well, and they could mirror what they were for Buffalo's "home" game at Citi Field in Queens against the New York Rangers on Jan. 1, 2018. For that game, Sabres season subscribers got the first option to buy tickets or get a refund for the lost home game in KeyBank Center.

Tim Hortons Field, the home of the CFL's Hamilton Tiger-Cats, opened in 2014 on the site of the Ti-Cats' longtime home, Ivor Wynne Stadium. It has a capacity of about 24,000 in normal configuration but can be expanded to around 40,000 for special events, which will be done when the stadium hosts the CFL's Grey Cup championship game on Dec. 12. It is about an hour drive from downtown Buffalo.

"It’s pretty special to be traded to such a place that values hockey, especially the fans," said Butcher, who got traded with a fifth-round draft choice to the Sabres in exchange for future considerations.

At the start of the Stanley Cup final in June, NHL commissioner Gary Bettman announced three outdoor games: For the 2021-22 season, the league has rescheduled the pandemic-postponed Winter Classic between the Minnesota Wild and St. Louis Blues for Jan. 1 in Minneapolis' Target Field and will stage a Stadium Series game between Nashville and Tampa Bay on Feb. 26 in Nissan Stadium, home of the NFL's Tennessee Titans. The league also said the Carolina Hurricanes will host a Stadium Series game during the 2022-23 season in Raleigh, N.C., after that was postponed last season.

At the time of its announcement, the league said it may have more news on outdoor play in the coming months.

"I think the commissioner had previously indicated we were hopeful of concluding arrangements for a Tim Hortons’ Heritage Classic later this season," NHL deputy commissioner Bill Daly said Sunday in an email to The Buffalo News and the Toronto Sun. "I’m not sure he indicated probable location or possible teams, but as a league event, these would be determined by the league."

It was one game in the snow. One day where they played hockey in a football stadium in Orchard Park. But it forever changed the course of special events for the National Hockey League.

The Sabres have played in two previous outdoor games, starting with the inaugural Winter Classic in then-Ralph Wilson Stadium against Pittsburgh on Jan. 1, 2008. The game at Citi Field, home of the New York Mets, was in honor of the 10-year anniversary of that game. Buffalo lost both contests past regulation, a 2-1 decision in the iconic Sidney Crosby shootout against Pittsburgh and a 3-2 overtime defeat to the Rangers.

The Leafs have played in three outdoor games, highlighted by a 3-2 shootout win over Detroit on Jan. 1, 2014, that drew an NHL-record crowd of 105,491 to Michigan Stadium in Ann Arbor. They also earned a 4-3 overtime win over the Wings in the NHL Centennial Classic on Jan. 1, 2017, at BMO Field in Toronto, and suffered a 5-2 loss to Washington in a Stadium Series game at the United States Naval Academy in Annapolis, Md., on March 3, 2018.

Due to the pandemic, the league postponed the Winter Classic in Minnesota and Stadium Series in Raleigh, N.C., last season. Two outdoor games (Colorado-Vegas and Boston-Philadelphia) were played without fans in Lake Tahoe, Nev.

Starting with the Heritage Classic between Montreal and Edmonton in Commonwealth Stadium in 2003, the NHL has staged 31 regular-season outdoor games.

Tampa Bay, Carolina, Arizona, Columbus and Florida are the only NHL teams yet to appear in an outdoor game and the Lightning will come off that list this season. The Chicago Blackhawks have made the most outdoor appearances with six, but have lost five of those games. Pittsburgh and Philadelphia have played in five.

The Sabres are the NHL parent to the Cyclones and have supplied a few players to Cincinnati each year since 2017.

Kyle Okposo on Jack Eichel: 'Everybody wants some closure and some answers'

Okposo, 33, said he is fully healthy heading into his sixth season with the Sabres.

Eichel has made a major move to try to rejuvenate his suddenly stalled NHL career.

Inside the NHL: With stalemate continuing, Sabres might have to consider pivoting on Eichel

Last week, Captain Jack got the hockey world buzzing with his second tweet, a "pensive face" emoji, the frown with closed eyes.

Hawerchuk is most connected to Winnipeg, the team that drafted him No. 1 overall in 1981.

How Sabres prospect Devon Levi developed into a record-setting goalie

The 19-year-old goalie broke Carey Price’s record at the IIHF World Junior Championship with a .964 save percentage in seven games for Canada at the annual tournament.

Inside the Sabres: Team must address void at center in any trade involving Jack Eichel

With Eichel expected to be traded before the start of the season, and Sam Reinhart a member of the Florida Panthers, the Sabres are thin at forward, particularly at center.

Sabres' No. 1 pick Owen Power to return to Michigan for sophomore season

The Sabres will likely opt to sign Power to an entry-level contract at the end of the 2021-22 season.