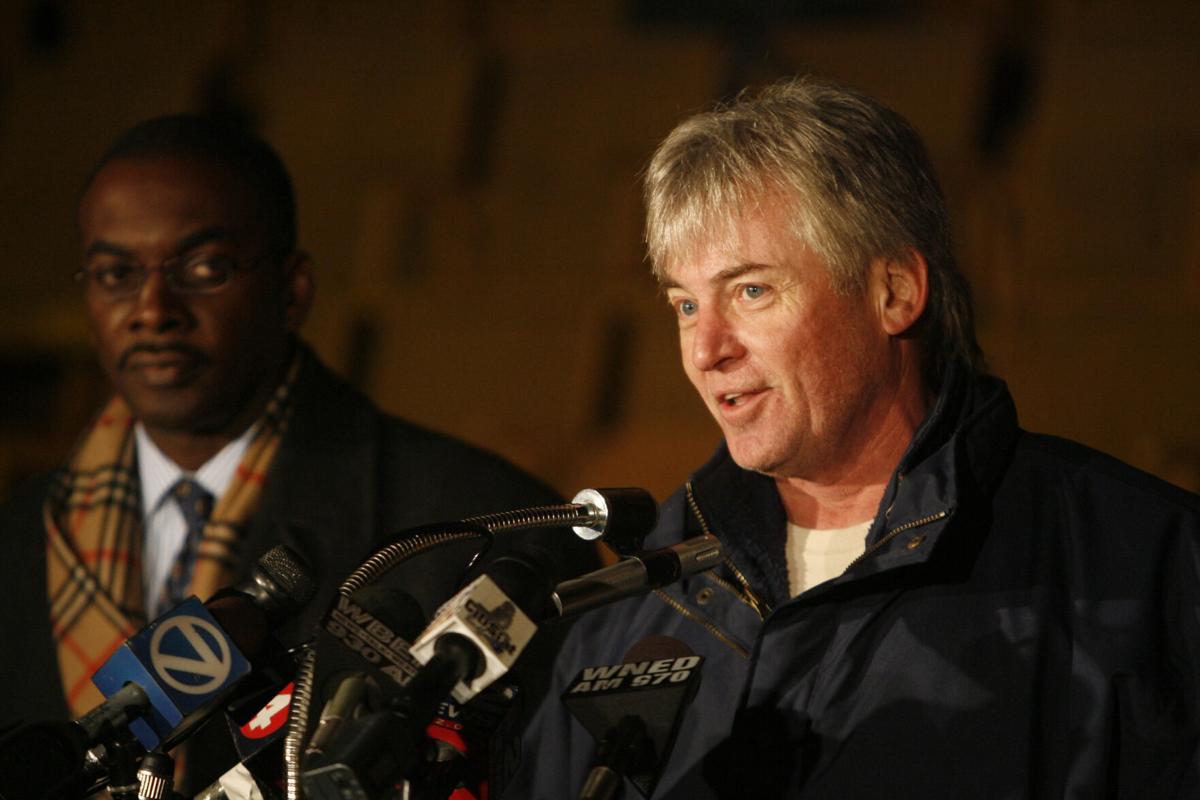 Sabres legend Rene Robert talks about his memories at the Aud as Mayor Byron Brown looks on during an announcement by the mayor of the details of the transfer of the Memorial Auditorium to the Erie Canal Harbor Development in 2007. 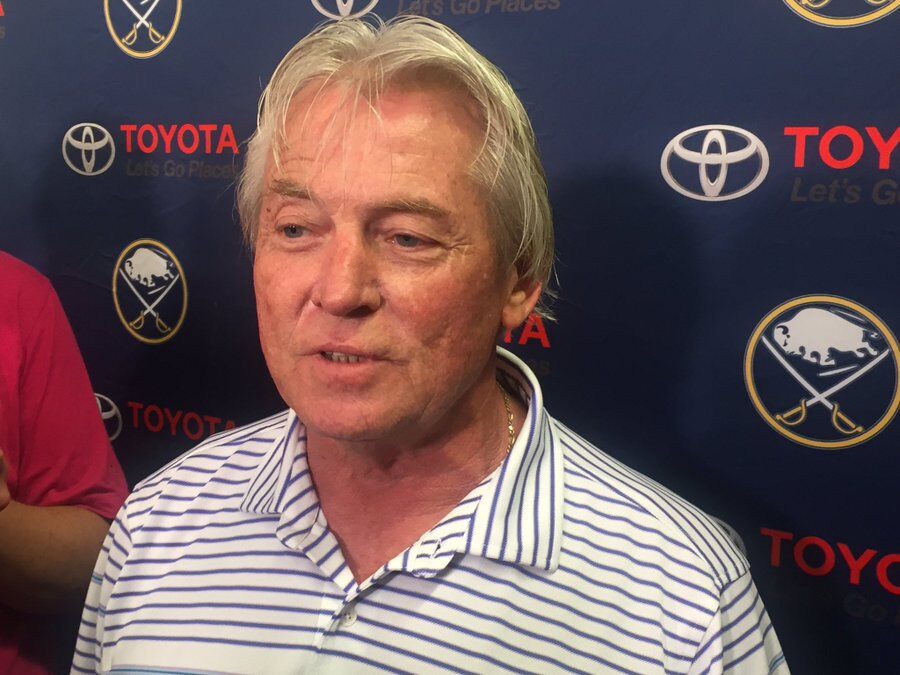 Rene Robert speaks to reporters at the Sabres Fan Fest event at KeyBank Center in August 2019.

Rene Robert, the right winger on the Buffalo Sabres' famed "French Connection" line of the 1970s, is seriously ill after suffering a massive heart attack Tuesday. He is listed in critical but stable condition in a hospital in Port Charlotte on Florida's west coast.

Robert, 72, has lived in Western New York at least part-time for nearly 50 years, and has split most of his time in recent years between Williamsville and Punta Gorda, Fla. He is a native of Trois-Rivieres, Quebec. Sources confirmed Robert's situation to The News and said he is on life support systems awaiting further procedures on his heart.

Robert's family members, including his two children, are at his side and a family spokesperson asked Sabres fans for privacy and prayers Friday night.

Robert was acquired from Pittsburgh in a nondescript trade for Eddie Shack on March 4, 1972, and was eventually placed on a line with center Gilbert Perreault and left wing Rick Martin. They became the focal point of Buffalo's unlikely 1973 playoff team and the 1975 Stanley Cup finalists, and were the NHL's dominant line throughout the '70s.

Perreault turned 70 in November. Martin died in 2011 at 59 after suffering a heart attack while driving in Clarence.

Perreault's iconic No. 11 was retired by the Sabres in 1990 while Robert's No. 14 and Martin's No. 7 were retired in a joint ceremony in 1995. A French Connection banner that flew in the Aud keeping the three of them together was moved to then-Marine Midland Arena when it opened in 1996. The players were immortalized by a bronze statue unveiled on the arena's Alumni Plaza in 2012.

Robert played eight of his 12 NHL seasons in Buffalo, collecting 222 goals, 330 assists and 552 points. He currently is ninth in franchise history in goals, fifth in assists and sixth in points.

His best offensive season was the '74-'75 campaign, when he collected career highs in goals, assists and points with a stat line of 40-60-100. It was the first 100-point season in franchise history and is one of just six in the club's 51 seasons.

Elected to the Sabres Hall of Fame in 1989 and the Greater Buffalo Sports Hall of Fame in 1994, Robert was listed No. 11 in a list of the Sabres' "Golden" team, the top 50 players in franchise history chosen by The News. It was released in 2019 in advance of the club's 50th anniversary season.

Robert was a clutch player for Buffalo in the playoffs, scoring 22 goals with 17 assists in 47 postseason games. Robert's Sabres career is most remembered for his three playoff overtime goals and the most well-known in the hockey world was his game-winner in the famous "Fog Game," Game 3 of the 1975 Stanley Cup Final in the overheated Memorial Auditorium against the Philadelphia Flyers.

Memories of the Fog Game remain sharp for those who were there, both on and off the

Robert's other's iconic goal came in Game 5 of the first round in 1973 at the Montreal Forum as he streaked through the faceoff circle and beat Canadiens goaltender Ken Dryden at 9:18 of OT to give the Sabres a 3-2 win. The victory in the first overtime game in franchise history put Buffalo on the national hockey map and got the Sabres within 3-2 in the series. It brought things back to the Aud, where Montreal wrapped up the series in Game 6 in the "Thank You, Sabres" game as the crowd saluted the team with a spontaneous chant as the clock ticked away.

Robert scored at least 21 goals in all seven of his full seasons with Buffalo and cracked the 30 mark five times. But his career with the team ended on Oct. 5, 1979, when new coach/GM Scotty Bowman quickly made his mark on the club by dealing Robert to the Colorado Rockies for defenseman John van Boxmeer, who helped the Sabres reach the Stanley Cup semifinals in 1980.

Playing for former Boston coach and major Buffalo rival Don Cherry, Robert scored 28 goals for the Rockies in the 1979-80 season before getting traded to Toronto the next year. He finished his career in 1981-82, scoring 13 goals for the Leafs.

Fans make the right call: The '74-75 Sabres are the No. 1 team in franchise history

You got it right. And I’m pleased I got you all wrong. When I learned of our plans to have fans vote on the best team in Sabres history, it stood to reason that recency bias might prevail. It was easy to write off the final result, figuring the beloved 2005-06 team or the 2006-07 Presidents’ Trophy squad would

Mike Harrington: A 14-goal night 45 years ago remains one of Sabres' wackiest

As the when, where and how of the NHL season loom amid the pandemic, Mike Harrington takes a look back at one of the wackiest games in Sabres history, a 14-2 victory over the Washington Capitals at the Aud.

Milt remembers: A night of high hockey drama in Montreal

Greater Buffalo Sports Hall of Fame member Milt Northrop has seen a lot in his 52-year career at The Buffalo News and even before that. Occasionally he will share some of the events that have left a lasting impression on him. Today, it’s a memorable time in April 1973 when the Sabres were in their first Stanley Cup playoff

A 'Golden' team of the greatest Sabres

From the Dominator to Dahlin and many fan favorites in between, Mike Harrington counts down the team’s top

He shoots, he scores! The Sabres' most memorable goals

From playoff overtime winners that will stand the test of time to some long-ago plays that still resonate in franchise annals, here’s our list of the 50 most memorable goals in Sabres

“It’s great. The crest, the color are very important,” said Hall of Fame center Gilbert Perreault, who participated in Saturday’s FanFest at KeyBank

Sabres legend Rene Robert talks about his memories at the Aud as Mayor Byron Brown looks on during an announcement by the mayor of the details of the transfer of the Memorial Auditorium to the Erie Canal Harbor Development in 2007. 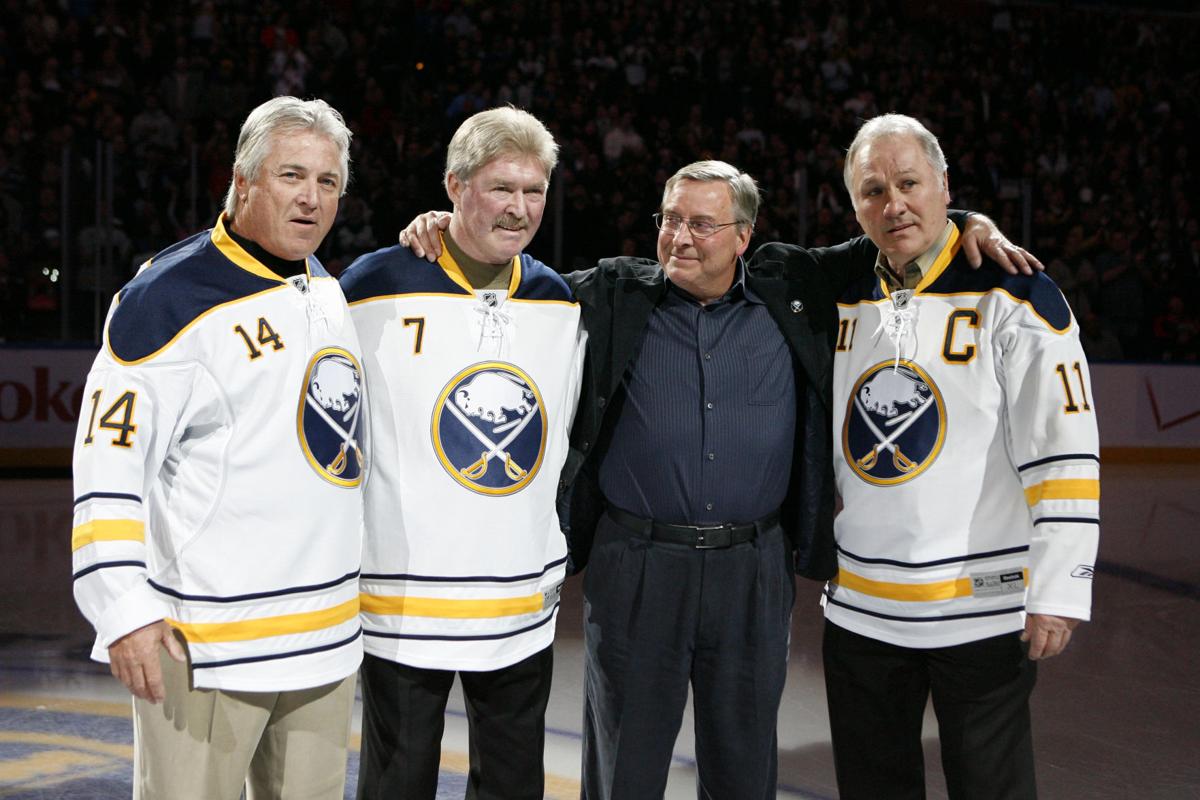 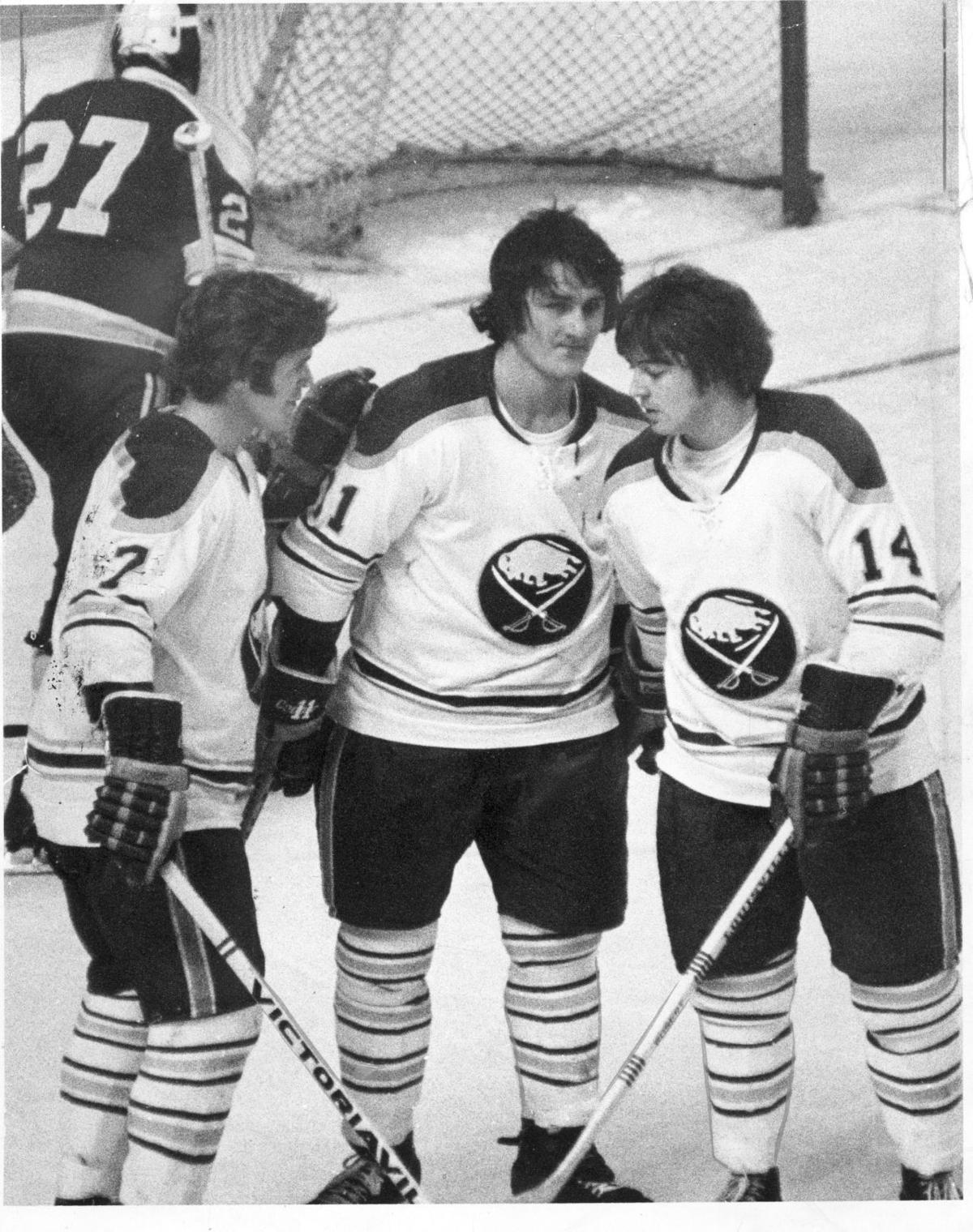 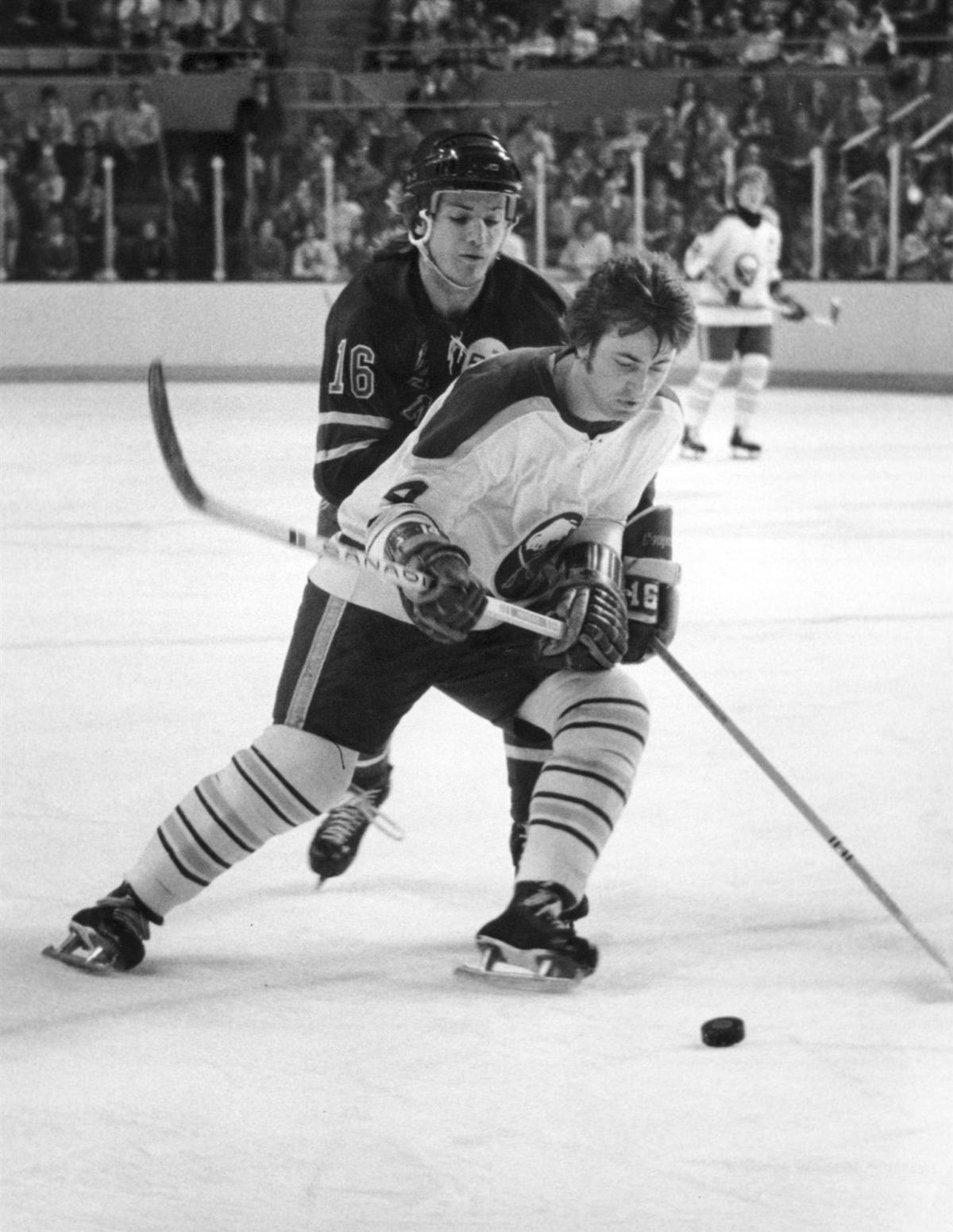 Rene Robert speaks to reporters at the Sabres Fan Fest event at KeyBank Center in August 2019.