Subscribe for $1
Read Today's E-Edition
Share This
Mike Harrington: Sabres got the Power, so they're going for the gusto on 'D' right away vs. Leafs
0 Comments
Share this 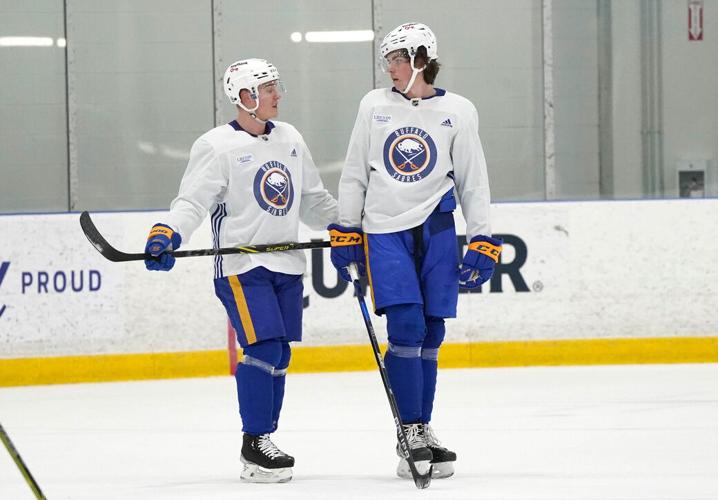 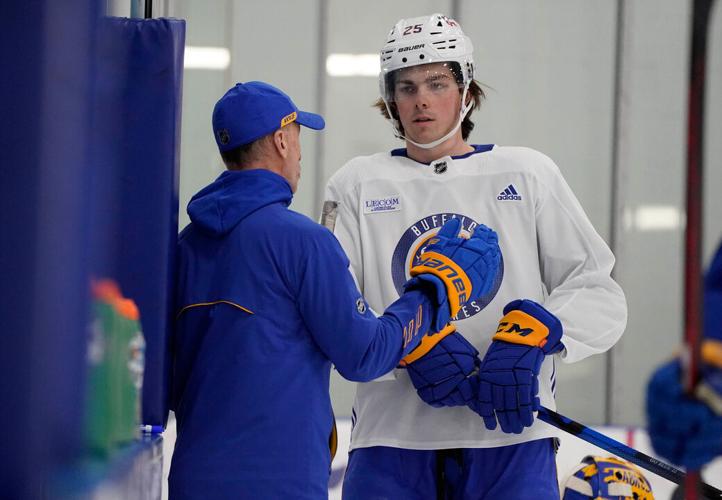 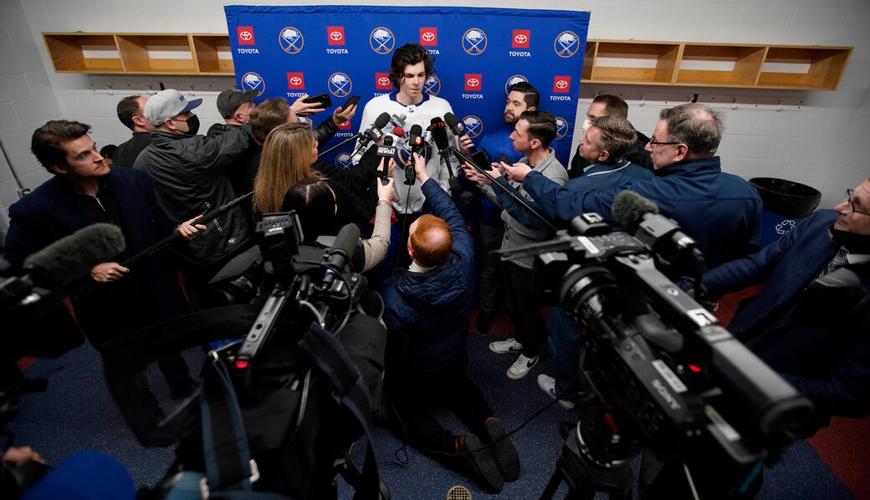 Buffalo Sabres defenseman Owen Power meets with the media after practice on Monday, April 11, 2022. Power, the 2021 overall No. 1 pick, joined the Sabres after finishing his college season at Michigan. (Harry Scull Jr./Buffalo News)

ETOBICOKE, Ont. – The Buffalo Sabres got us all good.

That assumption they fostered about bringing Owen Power along slowly, letting him get his feet wet in the NHL while probably playing third-pair minutes alongside a veteran journeyman like Mark Pysyk or Colin Miller?

The first Power practice here Monday in the Ford Performance Center showed that Don Granato is willing to press the delete key when the situation calls for it.

Dahlin knows the scrutiny that will follow Power. And while the Sabres’ dressing room is filled with players eager to help and support him, Dahlin has wisdom that can help Power through the highs and lows as a teenager competing in the best league in the world.

The Sabres' coach insisted change in his defense pairs to accommodate Power has been on his mind for weeks. And maybe it has. But a pair of blown two-goal leads on this road trip followed by Sunday's 5-0 pounding in Tampa Bay made it easy to shuffle the deck entirely in advance of Tuesday's game against the Toronto Maple Leafs in Scotiabank Arena.

So the answer to the longtime question of who would be Power's initial partner? Henri Jokiharju. Not a possibility this corner ever considered.

Jokiharju and Rasmus Dahlin have been the fixture top pair for months this season and for much of last year. But in Sunday's game, Casey Fitzgerald couldn't get out of his own way and Mattias Samuelsson was minus-4. There's real fear that Auston Matthews & Co. had enough of the Sabres during Buffalo's two wins last month and could induce similar damage as the Lightning.

So in practice Monday, Dahlin shifted to the right side with Samulesson while Power stayed on his natural left slot with Jokiharju. Why not? Power has already played in the World Juniors, Olympics and Frozen Four this year. His size, skill and skating ability absolutely could qualify him as one of the Sabres' top four defensemen right now.

"(Sunday's loss) wasn't really indicative of our team and how we were playing and we wanted to turn the page quick this morning," Granato said after practice Monday in a locker room packed with reporters from both cities. "But we didn't make any decisions based on (the Tampa debacle). We just weren't ourselves. So we don't want to overreact to last night."

Dahlin has played his best hockey with Jokiharju, a positionally sound player who is going to allow his partner to use their athleticism all over the ice. Granato says Jokiharju is a calming presence on the blueline. Makes sense that Power will have the same kind of backup.

Owen Power, who signed an entry-level deal with the Buffalo Sabres on Saturday, took part in his first full practice with the team on Monday.

"He takes a lot of responsibility," Dahlin said of Jokiharju. "He's putting pressure on the forwards a lot. And he's aggressive. It's easy to play with him. And I'm sure that he will do good."

It's a good partner for Power, who had seen Jokiharju play as a first-round pick for the Chicago Blackhawks while Power was a 17-year-old with the USHL's Chicago Steel.

"I didn't expect actually anything," Jokiharju said when asked if he knew the assignment was coming. "Just go with the flow."

"He didn't seem nervous at all actually out there," Jokiharju said of Power. "So it kind of feels like he's been around already."

Granato had Power by the white board before practice going over the drills and Jokiharju was doing a lot of talking to Power on the bench.

"You don't want to get into his head too much," Jokiharju said. "There's a reason why he's the first overall pick. I'm just trying to help him and he's got to do his own stuff. And I think that's why he's here, right? My job is pretty easy."

The Sabres' players saluted Power during Monday's post-practice stretch by putting Power in the middle of the circle and pounding their sticks on the ice, and Granato loved seeing his team immersed in the moment. They know what his presence means. This is a head start on next season. Still don't understand why the Sabres aren't doing likewise in goal with Ukko-Pekka Luukkonen.

Dahlin is at the point of his career that he's ready to share knowledge and not be pulled along, hence the pairing with Samuelsson after the Sabres' other big guy has struggled some in recent games. Power's debut means Tuesday's game will feature three of the last six No. 1 overall picks in Power, Dahlin (2018) and Matthews (2016).

"There's a guy over there that I'm pretty familiar with that's pretty hot right now," Granato said of Matthews, whom he knows from the U.S. National Development Team Program. "And I've been with Auston when he's on surges. And it's another daunting task."

Making your NHL debut in your hometown is big enough. Put poor Power can't even go dipping his toes into the water with this team. With Matthews on a 65-goal pace and one point from 100, and Mitch Marner leading the NHL in scoring over the last three months, Power is being asked to dive in right now.

"It's going to be pretty cool. I'm excited to see how they are and I just try to go out  there and play my game," Power said. "(Matthews) is a pretty incredible player. The amount of goals he's putting up is pretty insane."

Inside the NHL: Five things Sabres can do in the Owen Power lab the rest of the way

The pride of Michigan via Mississauga, Ont., is going to have a chance to play eight games this season, a veritable hockey lab for the Buffalo coaches to assimilate the No. 1 overall pick into NHL life on and off the ice and give him a huge head start on the 2022-23 campaign.

How much of a pushback will the Leafs have against Power and the Sabres after Buffalo's last two victories over them? It could be intense.

Matthews enters the night with 58 goals, 41 assists and 99 points in 67 games. He's one point shy of his first 100-point season and only the fifth in Maple Leafs history.

Mike Harrington: This didn't feel like an NHL debut. It felt like Owen Power has been here all along

"The Sabres said Sunday and Monday that it felt like Owen Power had been here all along. Then he took the ice and played a game. And he looked that way when it mattered too," writes Mike Harrington.

Kyle Okposo, Tage Thompson, Jeff Skinner and Rasmus Dahlin scored for the Sabres (27-37-11), who snapped a three-game skid and defeated Toronto three straight times for the first time since April 1, 2015 to March 7, 2016. Craig Anderson made 22 saves in goal, and Rasmus Asplund added an empty-net goal with 2:18 left in regulation.

Power, who made his NHL debut Tuesday in Toronto, will be in the lineup when the Sabres host the St. Louis Blues at 7 p.m. He skated 19:50 in the 5-2 win over the Toronto Maple Leafs, receiving time on the penalty kill and power play.

Don Granato on Sean McDermott's pregame visit with Sabres: 'I was obviously picking his brain a lot'

Don Granato asked Sean McDermott to talk to his team prior to Thursday's game against the St. Louis Blues.

Sabres Notebook: Alex Tuch gets his wish with a goal called by Rick Jeanneret

"Growing up, that voice, that energy helped me fall in love with the game of hockey. It's something that will always be special to me."

Vladimir Tarasenko had a five-point game as the Blues beat the Sabres for their seventh straight win.

Goals by Corey Perry and Ondrej Palat in a 17-second span in the first half of the first period put the Sabres on their heels for good and the Tampa Bay Lightning blitzed Buffalo 5-0 at Amalie Arena.

The No. 1 overall pick's first steps with his NHL team took place during an optional morning skate after he signed his entry-level deal on Saturday.

Auston Matthews is trying to become the NHL's first 60-goal scorer since Steven Stamkos in 2012.

'There's a lot of excitement and there should be' as Sabres sign No. 1 draft pick Owen Power

The dynamic 19-year-old defenseman will join the club during its road trip and is tentatively scheduled to make his debut Tuesday night in Toronto.

Observations: Sabres blow another lead as Panthers roar back to win in final minute

Though the Buffalo Sabres had a 3-1 lead through one period, the Florida Panthers got even after 40 minutes and handed Buffalo a heartbreaking 4-3 victory as Sam Bennett converted a tap-in off an Aleksander Barkov feed with 37.3 seconds left in regulation.

The Buffalo Sabres looked good for a sweep of their home-and-home series with the Carolina Hurricanes, but the Sabres simply weren't able to withstand the Canes' relentless pressure in the offensive zone.

As Sabres clinch dubious NHL record, they're undaunted by the task ahead

RALEIGH, N.C. – The Buffalo Sabres aren't going to the playoffs again this season. No shocker there. It was clear by Christmas that was going …

Individually, Levi has accomplished more in college than most amateur goalies could dream. His 1.53 goals-against average ranked third in Division I. He posted a school-record 10 shutouts that was only two off the single-season NCAA record.

A memorable season by Power and the Michigan Wolverines ended Thursday night with a 3-2 overtime loss to Denver in the Frozen Four at TD Garden.

The collaboration between Portillo and three Michigan students led to their creation of Dualete, a platform that allows youth athletes to register for one-on-one video sessions in which college athletes detail how they excel in a specific sport.

Buffalo Sabres defenseman Owen Power meets with the media after practice on Monday, April 11, 2022. Power, the 2021 overall No. 1 pick, joined the Sabres after finishing his college season at Michigan. (Harry Scull Jr./Buffalo News)