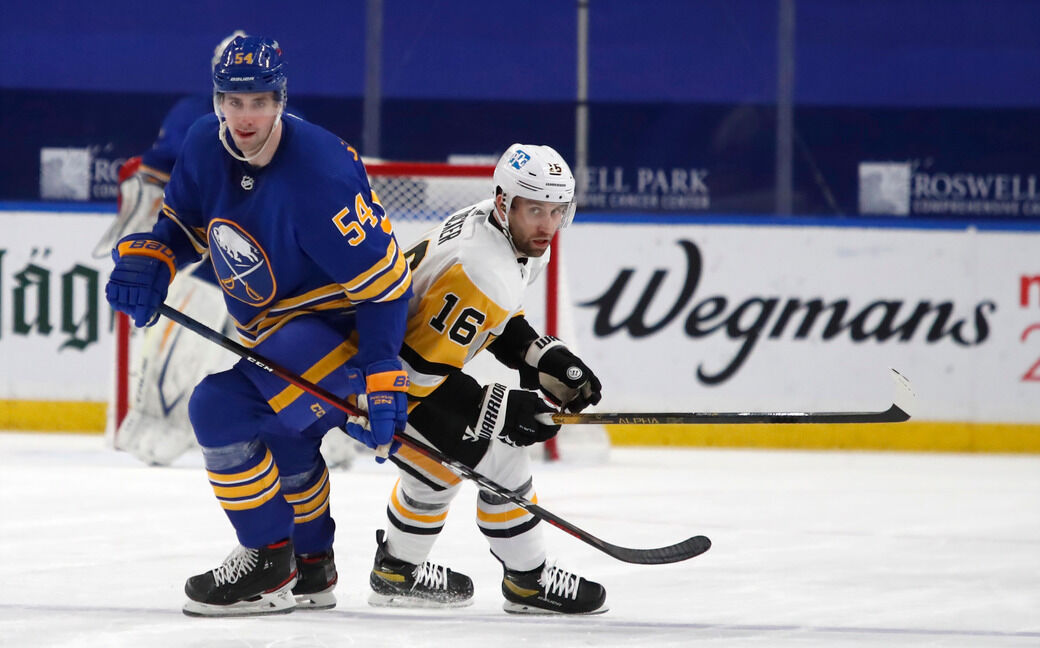 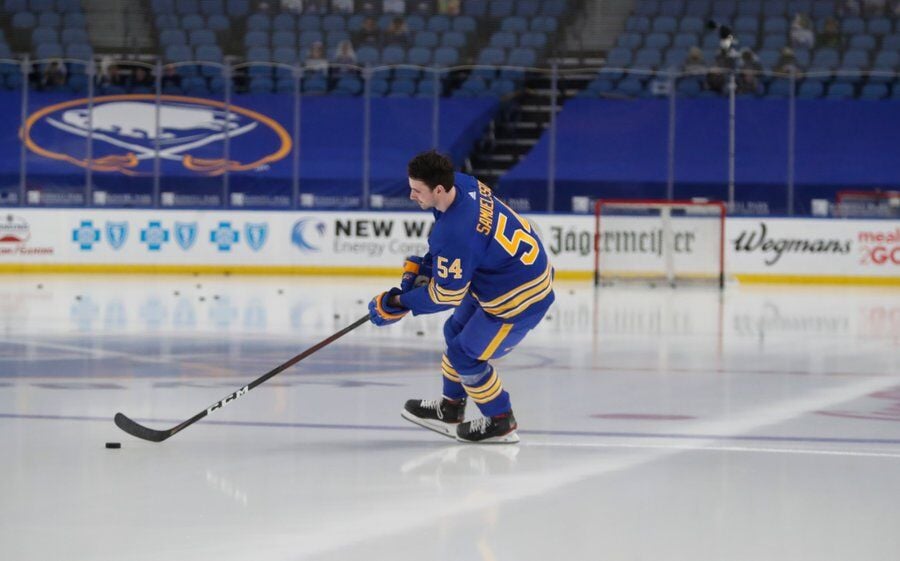 The rookie lap. It's one of the quirky little team traditions that's developed in hockey. First game in the NHL and you lead the team to the ice for warmup, instead of the starting goalie.

One problem: You go by yourself and nobody follows you.

The Wraparound: Sabres put it all together in strong win over Penguins

Arttu Routsalainen tallied after 26 seconds, Sam Reinhart scored two goals and Dustin Tokarski made 34 saves as the Sabres dumped the Pens 4-2 on Sunday in KeyBank Center.

Call it a rite of passage. You've waited your whole life for this moment and this is how it starts. Hope you're not attention-shy.

Jacob Bryson did it in February in New Jersey. Arttu Ruotsalainen did his here 10 days ago. Sunday, it was Mattias Samuelsson's turn after he got the call from Rochester. What this Sabres season has become mostly about is seeing their young talent. To get to the games, however, you have to get through the hijinks.

"Walking out there and you get your first shot," Samuelsson recounted of his solo trip at one end of KeyBank Center on Sunday. "You're alone out there, no helmet. And then you skate around two or three laps and they're still not coming and you start getting a little nervous. And then everyone comes out there. It's fun. You laugh about it. And it's something you always remember."

Mattias Samuelsson (54) makes his solo skate prior to his NHL debut for #Sabres vs #Pens pic.twitter.com/QBhsKKmPfA

Inside the NHL: Sabres have to be wary about deadline impact on current and future rivals

Samuelsson will certainly remember his first game, too. The Sabres were full marks for their 4-2 win over the Pittsburgh Penguins, and Buffalo's second-round pick in 2018 kept himself out of trouble against an opponent that can cause plenty for a 21-year-old.

In Saturday's 6-3 Rochester loss in Cleveland, Samuelsson scored the third goal of his first pro season and added an assist for his second multi-point game in the AHL. On the four-hour jaunt back to Rochester, he learned his next game wasn't going to be Wednesday against Syracuse.

It was going to be Sunday in Buffalo. Against Sidney Crosby and friends.

Samuelsson's dad, Kjell, played 813 games in the NHL from 1985-99 for four teams and is best remembered for two stints with the Philadelphia Flyers. In fact, he still works with them as a player development director.

But in 1992, the elder Samuelsson was part of a big deadline trade to Pittsburgh, and the Penguins went on to beat Chicago and an unknown rookie named Dominik Hasek to win their second straight Stanley Cup.

"It's pretty cool," Mattias Samuelsson said before the game. "My mom is from Pittsburgh. Her whole side of my family still lives there. My dad was on Cup teams. So there's definitely some history with the Penguins."

The 6-foot-4 Samuelsson, who spent the last two years at Western Michigan University, did fine in his NHL debut. He played 14 minutes, 12 seconds, all at even strength. One shot on goal. Two attempts, two hits, two blocked shots. No major blips.

The Sabres gave Samuelsson a big chance alongside Rasmus Ristolainen, now the graybeard of the defense at all of 26 years old. Nice pairing.

"That was something we were excited about," interim coach Don Granato said. "The opportunity to bring him in now we felt with Ristolainen playing the way he is and (Rasmus) Dahlin and the whole group back there, now was a real good time to bring in anybody young and new."

Ristolainen and Bryson had been a pair for several games, but Granato broke them up, with good reason. He loves how Ristolainen has become a mentor on this club and felt he wanted Bryson to fly off on his own with Colin Miller while putting Samuelsson with the club's most experienced blueliner.

Colorado's Philipp Grubauer was second in the NHL with 25 wins until his positive Covid-19 test.

"It was automatic," Granato said. "We talked about it even a few games ago that the chemistry with Bryson and Risto was awesome. And I believe he enjoyed mentoring 'Brys' and bringing Brys' game along really quick.

"So we thought, 'This is a perfect situation. We can bring Mattias up, slide him in there and Bryson's ready to go on his own,' and that was the case."

Samuelsson's first shift was a simple one. He came on the ice with Ristolainen for the center ice faceoff after Ruotsalainen scored 26 seconds into the game. He made a simple cross-ice pass to his defense partner off the draw and stayed out of trouble. In the first period, he also took a glancing bump from veteran Pittsburgh center Jeff Carter and made a nice backhand clear of the puck to Ristolainen to get it out of traffic.

There was one shift that Samuelsson chased Crosby a little much, almost out to the blueline, in fact. But 10-year NHL veterans get caught doing that, too, with No. 87, so you can't indict the kid for that.

The speed of the game? Yes, it was different. The Sabres have picked up their pace and, well, the Penguins are the Penguins. This wasn't like making your debut against the Devils or the Ducks.

"There was definitely a couple moments where one of the guys from Pittsburgh starts zipping around," Samuelsson said. "That’s something you got to adjust to playing your first NHL game. That’s one of the things you realize. There are things that you have to adjust to and it’s a lot faster of a league."

You have to love how things are going for this club. Ruotsalainen's first-minute goal on a 2-on-1 with Cozens blew Crosby's line away. Dahlin continues to dominate. Casey Mittelstadt is dangling with the puck like he's back at Highmark Stadium in the snow of the World Juniors. Tage Thompson looks like a skilled power forward. Bryson, who can be prone to some young player hiccups, nonetheless looks super comfortable.

GM Kevyn Adams went to Rochester on Wednesday with owner Terry Pegula and his presence sent a clear message to everyone on the ice in red and blue on the farm: The Sabres are watching you. More callups are coming. Expect Ukko-Pekka Luukkonen to make his debut in goal Thursday or Friday against Boston.

"They notice how you’re playing and they recognize how you’re doing down there," Samuelsson said. "Just keep playing your game and being yourself and good things will happen."

Memo to UPL: When you take the ice for that first game this week, just don't look behind you for any teammates. They won't be there. It's your moment.

Tokarski earned his first NHL win since 2015 and made 128 saves in four games.

Defenseman Nick DeSimone of East Amherst has been acquired on an AHL loan by the Rochester Amerks from the Vegas Golden Knights.

Sabres game day: A playoff simulator in opener of three-game set vs. Bruins

The visiting Boston Bruins have been one of Buffalo's chief rivals over the last 51 years.

Ukko-Pekka Luukkonen, the most heralded Sabres goalie prospect since Ryan Miller, won't get the call tonight against the Boston Bruins in KeyBank Center.

Inside the NHL: Dustin Tokarski has fond memories of historic AHL run

Tokarski has been a winner a lot in his career. He's earned a Memorial Cup in Spokane, a World Junior gold for Team Canada and two Calder Cups in the AHL.

Samuelsson has shown resolve in seven games with the Sabres, totaling two points with a minus-3 rating while averaging 17:28 of ice time.

"Everything that's going to be happening from today moving forward in our organization, Jason's going to be involved with," Adams said.

Quinn has two goals, seven assists and a minus-11 rating in 14 games for Rochester.

The Sabres had their playoff drought officially reach 10 seasons, tied for the longest in NHL history and the third longest active streak in the four major professional sports.

The loss officially eliminated Buffalo from the playoffs for a 10th straight season, matching the NHL record.

“I think we’ve been playing some really good hockey lately,” Dylan Cozens said. “The younger guys are getting lots of opportunities, so we’re just trying to grab that opportunity."