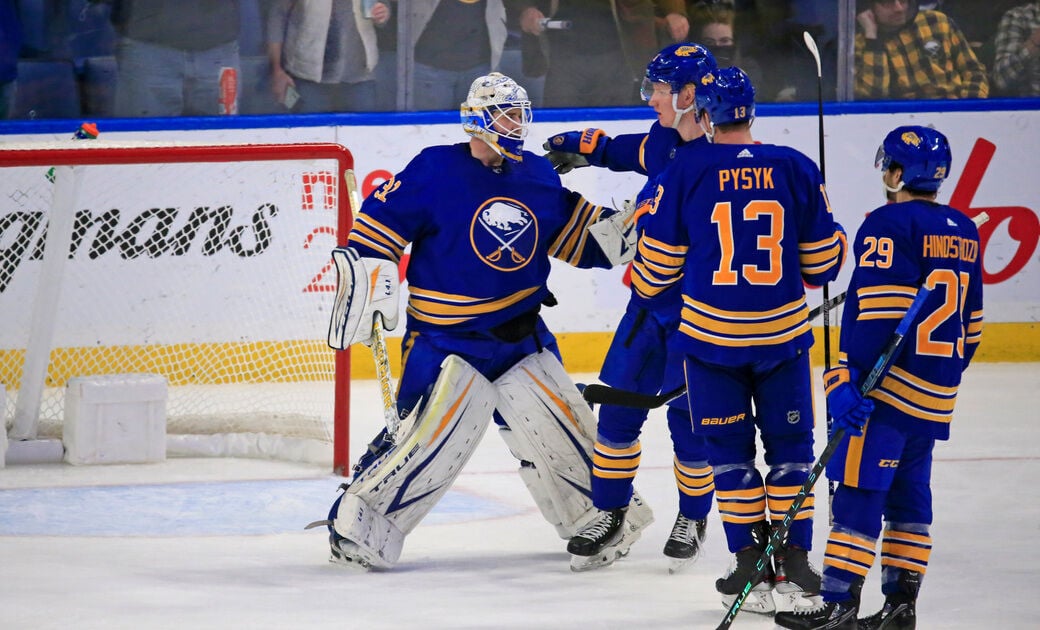 Buffalo Sabres goaltender Dustin Tokarski is congratulated on a victory over the Montreal Canadiens during the third period at the KeyBank Center on Friday, Nov. 26, 2021. (Harry Scull Jr./Buffalo News) 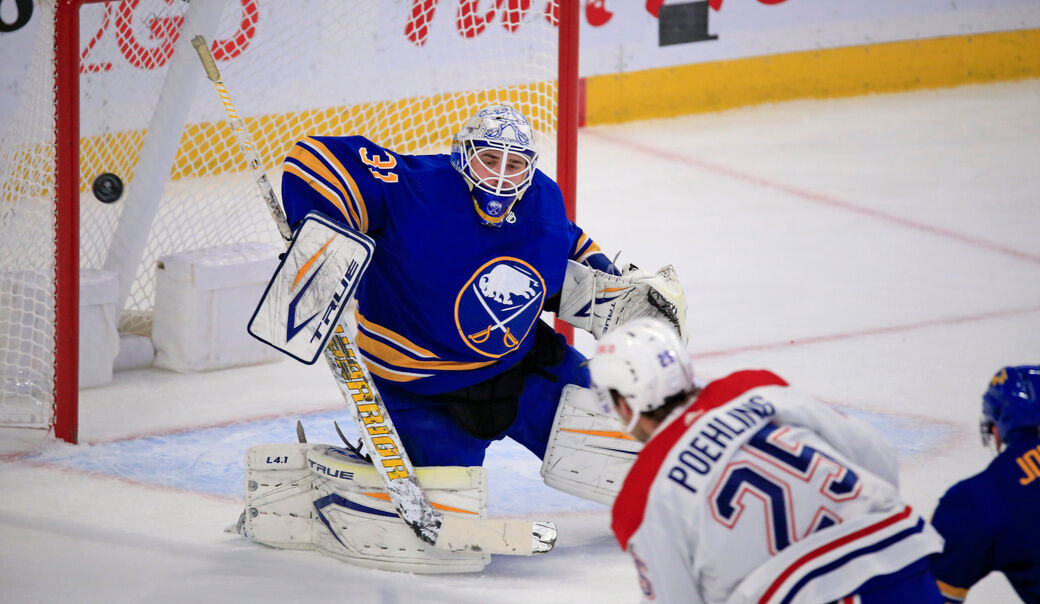 Craig Anderson went the route in the Nov. 2 loss at San Jose, but the Buffalo Sabres' No. 1 goaltender took a hard shot to the neck on Tomas Hertl's second-period goal and hasn't been seen since that night in the Shark Tank.

The 40-year-old won four of his six starts, posting a 2.50 goals-against average and .921 save percentage. The Sabres haven't been the same since his loss.

Thompson's two goals, the first and last of the game, led the Buffalo Sabres to a 4-1 win over the Montreal Canadiens on Friday at KeyBank Center.

Dustin Tokarski has had several good moments this year, and was up to the task in Friday night's 4-1 win over abysmal Montreal. Still, the Sabres' goaltending situation is tenuous much of the time, and downright dire at others.

The Sabres say Anderson is week to week with an upper-body injury, and a grim coach Don Granato admitted Friday morning that things aren't looking well. What was initially listed as day to day is heading toward four weeks with no end in sight.

"Because of our initial report and based on where we're at, it is a concern, obviously," Granato said. "We didn't feel he would be out this long and it has lingered, so there is concern with respect to that, definitely."

Observations: Another bad showing by a goalie derails Sabres' progress

Goalie Aaron Dell lasted only 20 minutes before he was pulled from the game during the first intermission. His four goals against on 22 shots forced his teammates to chase the game and led to a 5-1 loss to the Bruins in KeyBank Center.

As an aside, we have no way of knowing Anderson's exact diagnosis here. But here's a weird thought: Would it not be the most ultimate Sabres thing ever if the veteran was felled by a herniated disc in his neck two days before Jack Eichel was sent to Las Vegas?

No matter what the issue is, the Sabres clearly have to move on for the foreseeable future without Anderson. Tokarski was good Friday, making three key saves in the first two minutes of the third period to keep the Sabres' two-goal advantage. It's what a team needs, and the Habs immediately wilted after Tage Thompson's second goal of the game gave the Sabres a three-goal advantage.

"It was big," Tokarski said of his stops on Jake Evans, Nick Suzuki and Christian Dvorak. "We had been playing an unbelievable game so far and we knew they were going to push. I've said it before, I'm a member of a unit out there and I'm glad I was able to help stop a couple."

"I loved the way he looked," Granato said. "Confident. He absorbed pucks and any pucks that went off him were in the corner for the most part. ... When he had to be our final line of defense and there was time and space for a shooter, he came up big."

Tokarski started getting his confidence back when he relieved Aaron Dell on Wednesday against Boston and allowed one goal in the final 40 minutes. Still, you immediately see the problem in this stretch of games. The Sabres play Saturday night at Detroit and host Seattle here Monday.

Mike Harrington: As his return to Sabres nears, Casey Mittelstadt gives lots of thanks

Out since midway through the Oct. 14 season opener, Mittelstadt might only be a few days away from returning.

Dilemma: You can't run Tokarski out there three times in four nights, but Dell just isn't an NHL-level goalie anymore.

When Tokarski pulled off his 45-save Houdini act Nov. 16 in Pittsburgh, he and Anderson had combined for a .920 save percentage for the first 15 games of the season. That would have left them third in the NHL were it not for Dell's .808 three days earlier in his debut, the last-second loss to Toronto.

But since then, Tokarski has been pulled twice and Dell got yanked after the four-goal first period Wednesday against Boston. The net has been a disaster, a big reason the club had allowed 22 goals in a four-game stretch and had been touched for five or more eight times in an 11-game stretch.

On a mission in Rochester, Jack Quinn showing he could be close to helping Sabres

Quinn's 18 points through 14 games were third in the AHL entering Tuesday, and he has nine goals after totaling only two in 15 games last season.

If Anderson is out long term, what can the Sabres do? You could make a trade for somebody else's No. 3 man and essentially get another Dell. So maybe the attention has to go to Dallas, where Jake Oettinger (3-0, 1.29/.955) is becoming a sensation and there are options.

Holtby has a $2 million cap hit and then is an unrestricted free agent after the season. Khudobin is owed $3.33 million this year and next, but has a modified no-trade clause and you suppose he could nix a deal here.

Absent a trade, prospect Ukko-Pekka Luukkonen isn't ready for full-time NHL duty yet, but he would seem to be a much better option for spot duty than Dell. After a terrible October, Luukkonen has been much better in November and even earned AHL Player of the Week at one point.

A new wrinkle came into the mix Friday night with a report from Sportsnet's Elliotte Friedman that Ottawa is putting struggling Matt Murray on waivers. But that should be a hard no.

A two-time Stanley Cup champion seems like an intriguing idea. But Murray hasn't done much the last four years and is owed $6.25 million for two more seasons. He's at 3.26 – Tokarki's GAA entering Friday – and .890 for six games this season. There are connections there, with Sabres assistant general manager Jason Karmanos and goalie coach Mike Bales well familiar with Murray from their time in Pittsburgh.

Still, the money and his spotty performances don't make that seem likely.

Shoddy goaltending can ruin a team's confidence. It gets you playing tentative. It ruins your penalty kill, like we've seen. The Sabres are going to go with Tokarski for one spot, and he's given them a lot right since training camp. They have to get somebody else to go with him. Anderson's injury and the compressed schedule of games in an Olympic year leaves them no choice.

Observations: In finale of grueling week, Sabres are clipped by Red Wings in OT

Saturday's 3-2 overtime loss to the Detroit Red Wings in Little Caesars Arena left the Sabres 1-3-1 in the last five games and 8-10-3 overall.

Call it round two of the Granato family rivalry Monday night in KeyBank Center.

Tuch wore a gold noncontact jersey and skated as an extra during the workout.

Tuch shined on Monday as he joined his teammates on the ice for the first time, taking part in their morning skate in a non-contact role prior to the game against Seattle.

In other news, Casey Mittelstadt and Mark Jankowski were on forward lines at Tuesday's practice, making it likely they will play in Thursday's game at Florida.

Buffalo Sabres goaltender Dustin Tokarski is congratulated on a victory over the Montreal Canadiens during the third period at the KeyBank Center on Friday, Nov. 26, 2021. (Harry Scull Jr./Buffalo News)