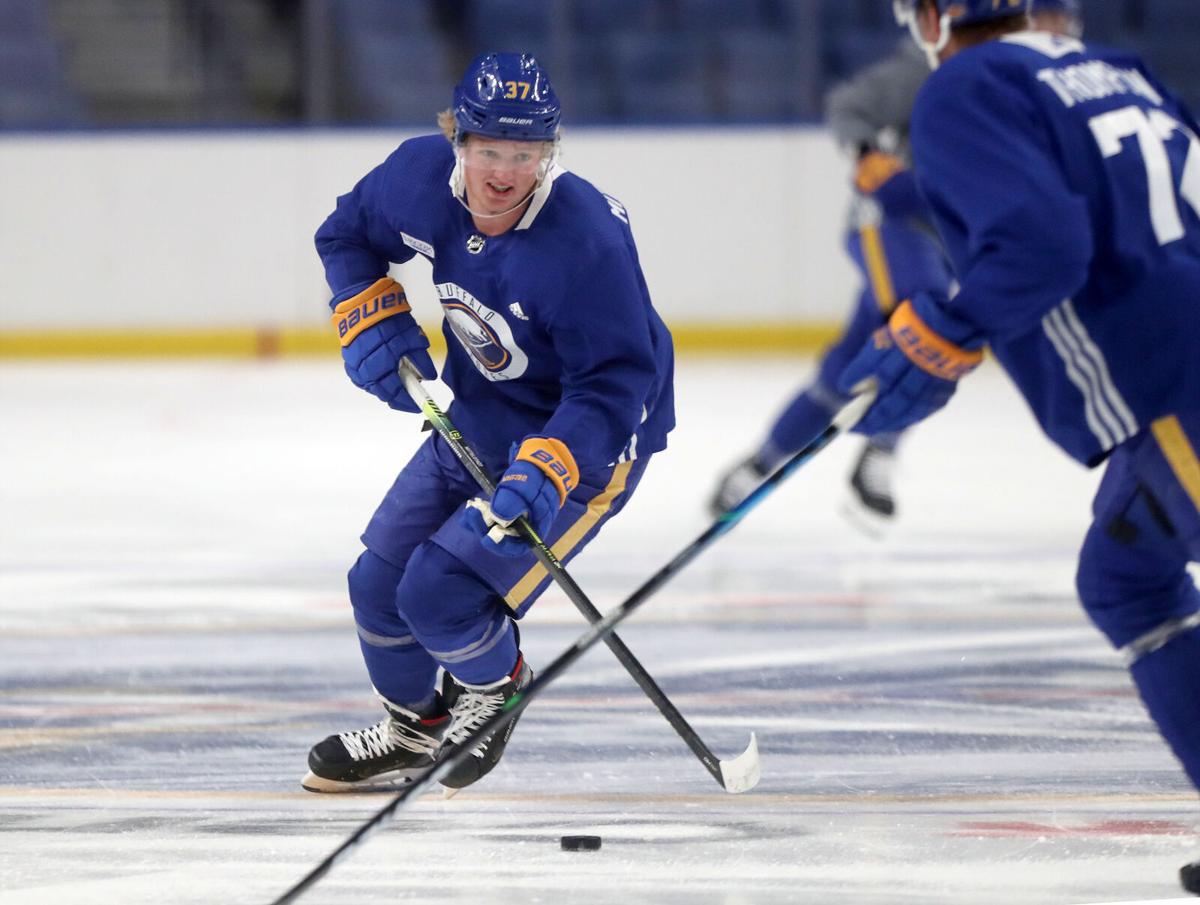 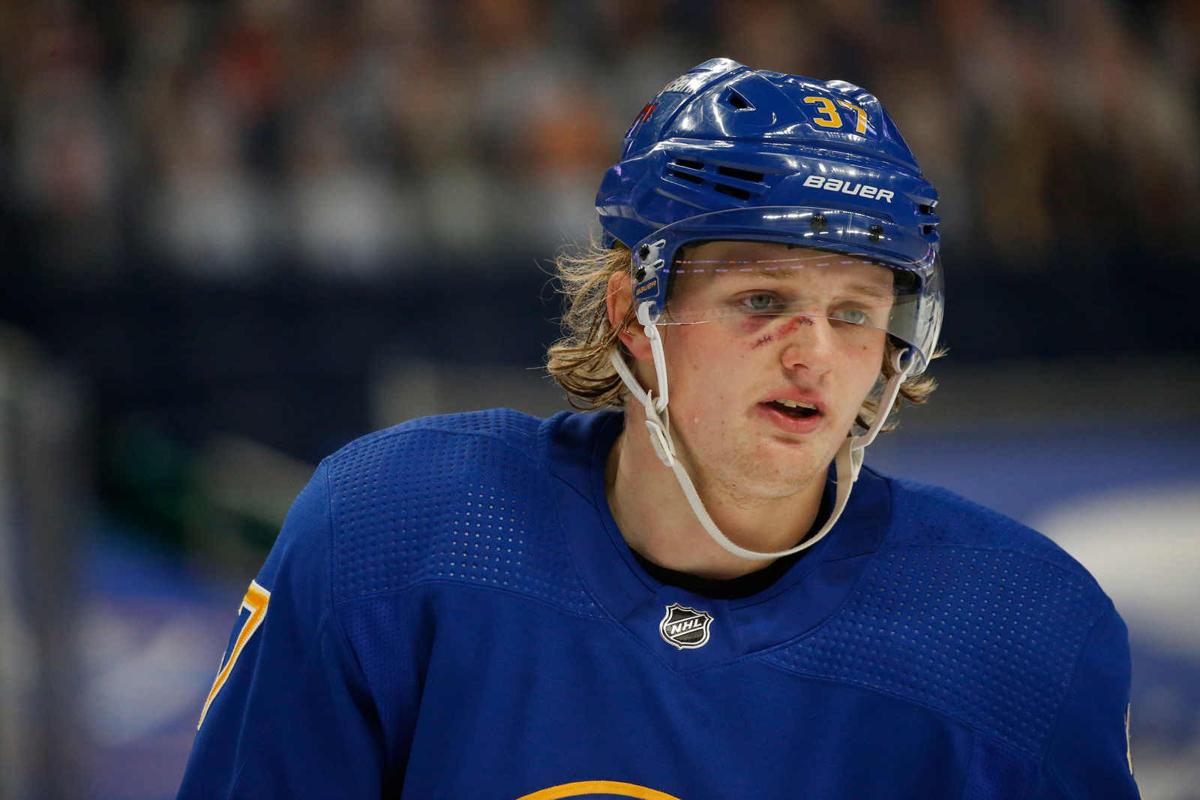 Buffalo Sabres center Casey Mittelstadt (37) wears a bit of the season on his face during the first period.

Somewhere during the seemingly never-ending drive from Buffalo to Rochester in December 2019, Casey Mittelstadt was speaking to his father, Tom, about the difficult news that he was joining the Amerks after 114 games with the Sabres.

Tom, the patriarch of the hockey family, didn’t mince words with his then-21-year-old son.

The assignment was a defining moment for Mittelstadt. He was the Amerks’ best player in the final 36 games of that shortened season, receiving heavy minutes and difficult assignments while learning from mistakes that can lead to a swift benching in the NHL.

Two years, two contracts and another Sabres coaching change later, Mittelstadt is a key member of the franchise’s young core and will likely center the team’s top line on opening night Thursday against the Montreal Canadiens.

The prominent role wasn’t a gift, either. Only nine months ago, at the start of the 56-game regular season, Mittelstadt was on the Sabres’ taxi squad. Kevyn Adams wasn’t the general manager who selected Mittelstadt eighth overall in 2017.

Through a summer strength-training program and invaluable on-ice lessons gained in the final months of last season, Mittelstadt earned his spot. And the 22-year-old is determined to not relinquish it.

“I never stopped believing in myself,” he said. “I’m just going to keep coming, working hard and try to get better.”

This isn’t an easy situation for Mittelstadt or fellow young center Dylan Cozens. Both will be counted on to replace departed forward Sam Reinhart and star center Jack Eichel, who is awaiting a trade amid a stalemate with the team over treatment for a herniated disk.

There will be unfair expectations given the increased ice time and void left by those departures. Mittelstadt, though, appears ready for the assignment. He had two goals and three points in three preseason games, skating mostly with wingers Jeff Skinner and Vinnie Hinostroza at 5-on-5.

The move means the Sabres will go with seven defenseman on the initial roster.

The trio had a plus-22 shot-attempt differential in two-plus games together, showing they can be particularly potent while generating offense off the rush. Mittelstadt, who turns 23 next month, quarterbacked the top power play from the left wall, Eichel’s former spot, and his skating stride looked elite.

Mittelstadt’s immediate impact shouldn’t have come as a surprise. He thrived under Don Granato during the second half of 2020-21, totaling nine goals and 17 points while averaging 17:17 of ice time in the final 22 games.

“I think he’s starting to find a voice,” Sabres winger Kyle Okposo said of Mittelstadt. “If you would have told me two years ago that he would be at the level of maturation that he is now on the ice and off the ice, I might have said that might not happen. But he’s there. … He’s really stepped into his skin nicely, and I think that he’s only going to keep getting better and keep growing up on a personal level, too.”

The signs were evident during Mittelstadt’s first full seasons with the organization. He played well during the first 10 games of 2019-20, only to endure struggles that led him to join Rochester. As a rookie in 2018-19, Mittelstadt had 12 goals and 25 points in 75 games.

The transition to center is difficult for young players. Defensive assignments are more challenging than at lower levels, particularly on the road when the opponent can expose those deficiencies.

While the Sabres’ 3-1 victory Saturday reminded fans what style of play to expect from the club under Granato, it’s unclear who will be in the lineup when the regular season opens Thursday in Buffalo against Montreal.

Following his time in Rochester, Mittelstadt used the long offseason in the summer of 2020 to gain strength and improve his physical conditioning. The additions of Eric Staal and Cody Eakin that October led Mittelstadt to start the season on the taxi squad, but he worked with then-director of player development Matt Ellis to improve his individual game and prepare for an opportunity.

When Mittelstadt was elevated to the active roster, former coach Ralph Krueger mostly used the former world juniors star on the wing. Krueger even went as far as to suggest that Mittelstadt’s NHL future might not be at center.

When Krueger was fired, Granato moved Mittelstadt back to center and allowed him to face top opposition. Mittelstadt thrived, earning himself a three-year, $7.5 million contract with Buffalo this summer.

“I think I had a couple rough summers, personally. So, yeah, it was good (to finish the season strong),” Mittelstadt said. “But at the same time, I think another thing I learned is you can’t get comfortable. … It was definitely a better summer, I think, for my attitude and overall well-being. But, like I said, you can’t lose that feeling and you’ve got to find it some more.”

Mittelstadt knows how to use his linemates, and he’s spent ample practice time working on faceoffs after he won 49% of his draws last season. The defensive side of the game also will need to evolve as he receives more matchups against top Atlantic Division centers Patrice Bergeron, Aleksander Barkov, Steven Stamkos, Brayden Point, Dylan Larkin, Auston Matthews and John Tavares.

The sense you get is that fences are being mended in what had been a toxic situation.

Eichel became a reliable two-way center through some difficult moments over his first four years in the league. And Mittelstadt, like Eichel, will learn how to use his shot more often. A willingness to shoot led Eichel to score a career-high 36 goals in 2019-20 and, according to Granato, Mittelstadt could go through a similar transformation now that he knows his shot can beat NHL goalies. That confidence, and the maturity that came along with it, might not have been possible without that long drive to Rochester nearly two years ago.

“Shooting in the NHL, you have these guys that come in and they’re just shooters,” Granato said. “They love to shoot the puck. And then you have the creative kind that are goal scorers all the way up as well, but they don’t shoot as much or they don’t focus on shots as much or taking it to the net. And I think that’s where Casey’s really progressed. A lot of time, you come up and your shot is not beating goaltenders. I mean, you are at the NHL level, you weren’t before. And so until you improve your shot and velocity and everything else, even though you were a goal scorer at a previous level, you’re not getting the reward for it, so you sometimes lean to more playmaking.

“But Casey now, I think, the self-expectation to score is greater, so he’s going to shoot more as a result.”

During a season in which you’ll read more prospects coverage in The Buffalo News, here’s a glance at the 15 to watch in 2021-22.

With questions abound, Sabres determined to show they're ready to succeed

“We are a tight group and we know what we expect from each other,” Rasmus Dahlin said. “And everyone’s talking about the same stuff. Like, we really want to turn this around and we really want to be a winning team.”

“I think as you watch us, you'll see that night to night we'll be getting better and more efficient in different areas, and eventually it will all start to add up,” Granato says.

"We feel they're great leaders,  two of our veteran guys that have a passion and love for not only the Sabres but Buffalo," said coach Don Granato.

Sabres preview: Don Granato's drive to build a winner; No, they're not tanking

The Buffalo Sabres open the 2021-22 NHL season on Thursday against Montreal at KeyBank Center. Check out our team's complete preview coverage.

The Greater Buffalo Sports Hall of Fame will honor award-winning photojournalist Ron Moscati as a member of the class of 2021.

Buffalo Sabres center Casey Mittelstadt (37) wears a bit of the season on his face during the first period.