From Sabres to Amerks to healthy scratch, John Gilmour hopes to rebound
0 comments
Share this
Support this work for $1 a month
1 of 2 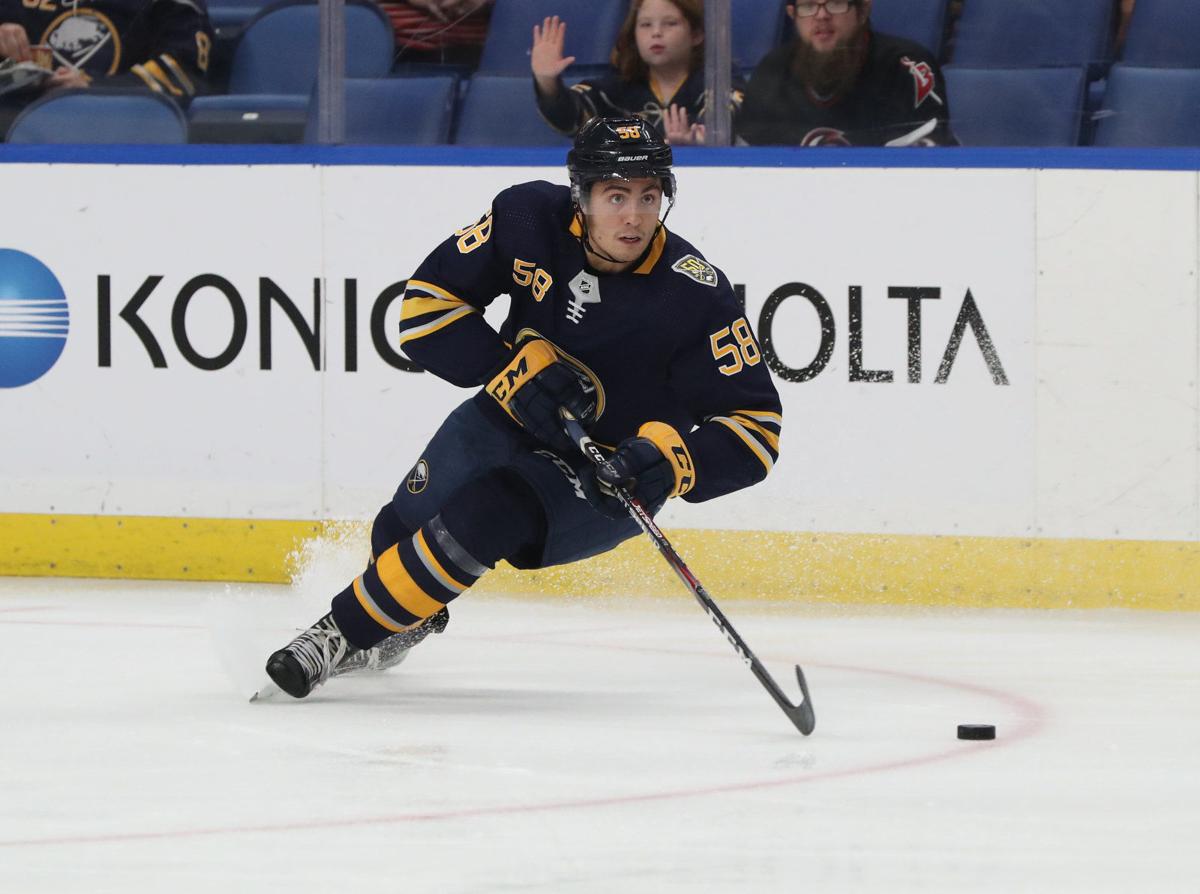 John Gilmour started the season with four games with the Sabres, but has been in Rochester since. (James P. McCoy/News file photo) 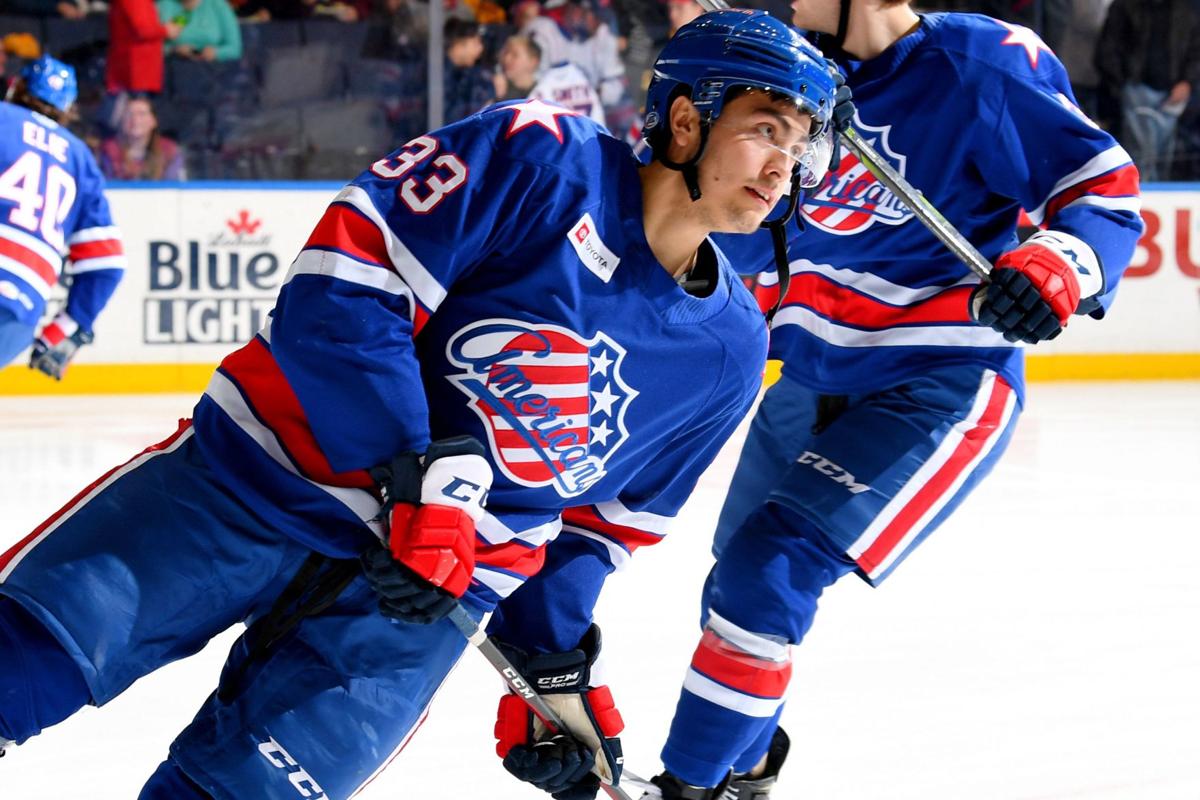 John Gilmour started the season with four games with the Sabres, but has been in Rochester since. (Micheline Veluvolu/Rochester Americans)

ROCHESTER – John Gilmour knows he deserved to be a healthy scratch. The high-scoring defenseman’s erratic play made him the Americans’ biggest liability.

Gilmour said he wasn’t showcasing much poise, trusting his instincts or moving his feet enough.

So last Saturday, hours after a rough outing in the Amerks’ 5-2 home loss to the Syracuse Crunch, coach Chris Taylor benched Gilmour, who began the season as the Buffalo Sabres’ eighth defenseman.

“I wasn’t playing to my standard the last few games, and especially the Friday game, I didn’t like my game at all,” Gilmour said. “I probably deserved to be sitting in the stands. We have such a deep blue line. I learned that anybody on any night can be in the stands.”

Gilmour, 26, is one of the Amerks’ highest-paid players. After scoring 20 goals and 54 points in 70 games with the Hartford Wolf Pack last season, he signed a one-way contract with the Sabres worth $700,000.

In October, Gilmour earned a spot on the Sabres’ opening night roster. But he played just four games before they waived him in late November.

After the Sabres assigned him to Rochester, Taylor said Gilmour “wanted to prove that he was a player still available to play in the NHL.”

“So he wanted to come to Rochester and show that he could score a lot of points,” he said. “I think his defensive habits got away from him there. That’s the biggest thing, as a team we count of defense first and then bring the offense.

“I think from other teams he was with he was more offensive and didn’t really have to worry. So I think we’re in just a learning process getting to know him and making sure he understands what we want as well.”

Gilmour said he creates trouble for himself by overthinking and trying to do too much.

“Then next thing you know, it ends up hurting you and the team in a way,” said Gilmour, who has compiled six goals, 13 points and a team-worst minus-14 rating in 32 games. “So (I’m) definitely trying to find a good balance between trying to make great plays and just a simple play.”

When the Sabres sent Lawrence Pilut to the Amerks for last Saturday afternoon’s road game against the Toronto Marlies, Taylor scratched Gilmour.

“We felt with the D we had John was the guy that needed to sit out,” he said. “He’s had good games but he’s also had some ones he’d like to have back. I just felt it was time to take a step back for a game and let him watch.”

“He knew he wasn’t playing up to his standards and what we want, so we had a good talk,” he said. “His last couple games I thought he played a lot better.”

Gilmour said watching the Amerks’ 4-0 loss from the stands helped him “take a deep breath” and “kind of revamped” him.

Taylor inserted Gilmour for the Amerks’ back-to-back road set against the Charlotte Checkers on Tuesday and Wednesday. He scored in Tuesday’s 4-2 loss.

“I was eager for my next shot to get back in and show why I can be a really good player in this league,” he said. “Sometimes there’s going to be setbacks and some adversity. At 26 years old, it’s not just going to be smooth sailing from here on out, and that just reaffirmed it, that I got to be sharp every day. I could be out just like everyone else.”

"The Sabres were full marks for their 4-2 win over the Pittsburgh Penguins, and Buffalo's second-round pick in 2018 kept himself out of trouble against an opponent that can cause plenty for a 21-year-old," writes Mike Harrington.

Mike Harrington: The education of Kevyn Adams won't be a straight-line process

"Whether we like it or not, the Buffalo Sabres have a general manager undergoing on-the-job training. The education of Kevyn Adams took yet another twist the last couple of days," writes Mike Harrington.

What's next for the Sabres with Jack Eichel done for the season?

The former second overall draft pick is expected to be ready for the start of the 2021-22 season.

Sabres keep up their hot play with strong win over Capitals

The Buffalo Sabres surprised the Washington Capitals, 5-2, Thursday night in Capital One Arena.

The Wraparound: Sabres put it all together in strong win over Penguins

Arttu Routsalainen tallied after 26 seconds, Sam Reinhart scored two goals and Dustin Tokarski made 34 saves as the Sabres dumped the Pens 4-2 on Sunday in KeyBank Center.

The Wraparound: Ullmark leaves with injury in Sabres' shootout loss

Though Ullmark's absence loomed large, the Sabres withstood the bruising Bruins' blitz, tying the score in the third period before losing 3-2 in a shootout at TD Garden.

Observations: With Luukkonen on the horizon, Tokarski finally gets a win for Sabres

Dustin Tokarski made 27 saves Thursday night in the Sabres' dominating 5-2 win over the Capitals.

After scoring only one goal in 27 games in Arizona, Caggiula was placed on waivers and claimed by the Sabres.

John Gilmour started the season with four games with the Sabres, but has been in Rochester since. (James P. McCoy/News file photo)

John Gilmour started the season with four games with the Sabres, but has been in Rochester since. (Micheline Veluvolu/Rochester Americans)