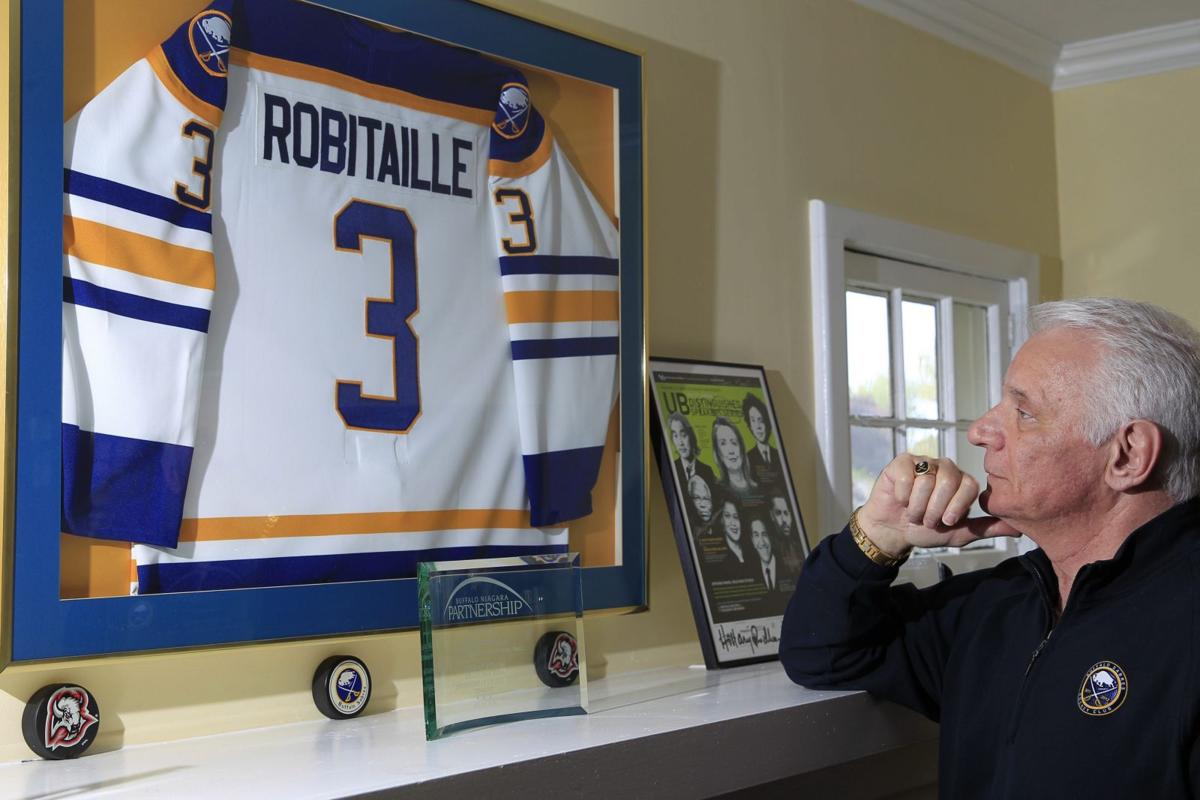 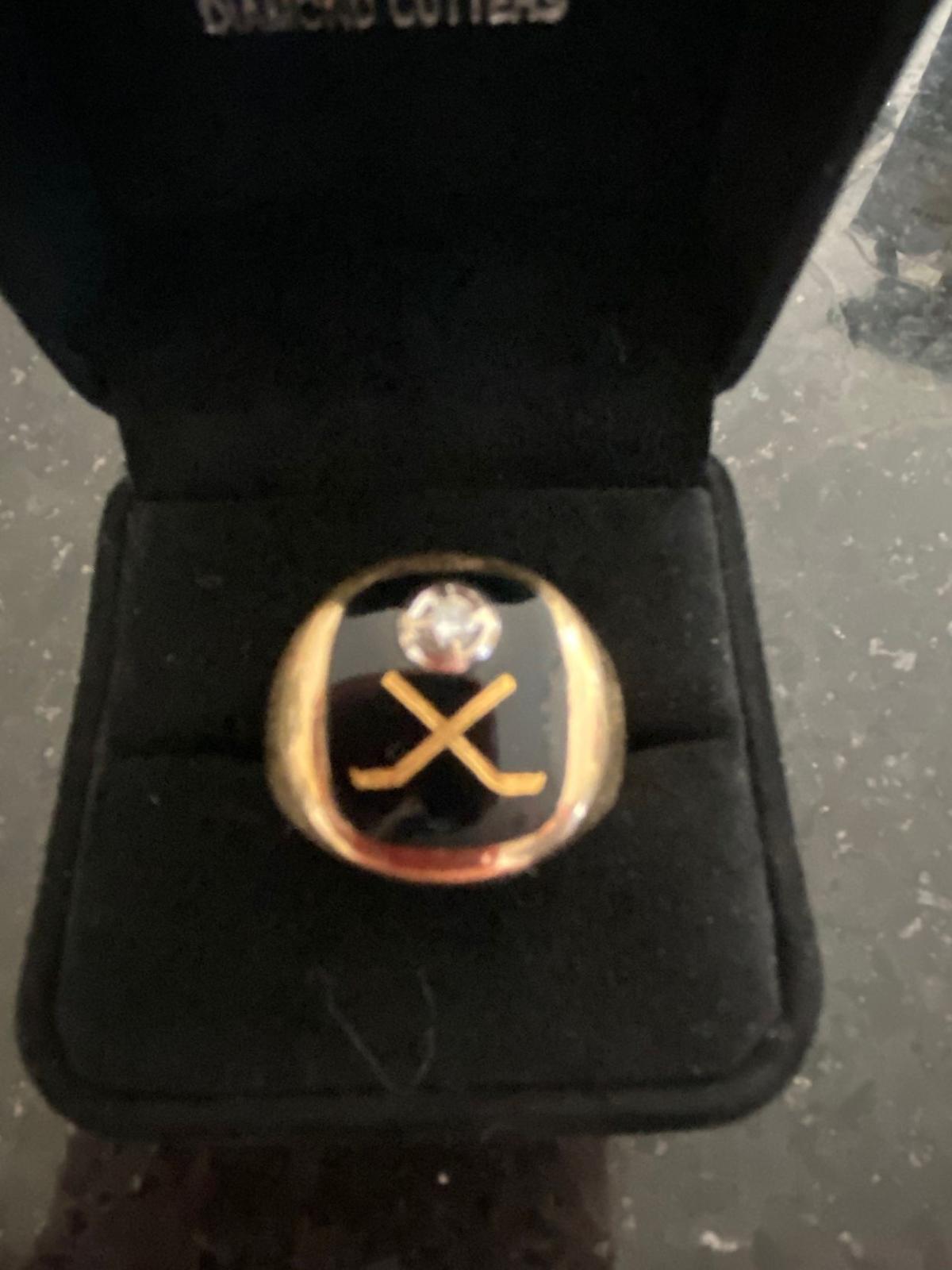 Mike Robitaille received this ring as a member of the Buffalo Bisons following their championship in 1969-70. The ring was stolen from his hotel room in New York before he recovered the keepsake from a memorabilia dealer in Western Canada. (Photo courtesy Mike Robitaille)

The Buffalo Bisons won the Calder Cup 50 years ago this week. Mike Robitaille played in just five games for that final Bisons hockey team before the arrival of the Sabres, but he wears his championship ring proudly.

“That ring means a lot to me,” he said. “It opened the door to a lot of things.”

Robitaille would go on to play for the Sabres and be an analyst on their broadcasts, so he’s long been a household name in Western New York. But he couldn’t have imagined any of that in his quickie stint in 1970, when the Bisons swept the Springfield (Mass.) Kings in the finals of the American Hockey League playoffs.

This is the story of a Calder Cup ring that Robitaille won on the ice, lost to a thief, then reclaimed, many years later, from a memorabilia dealer. It carries a depth of meaning for him now that he could not have guessed then.

“In the long run, when you look at the mediocre history of my life,” he said, “it opened the doors of Buffalo to me. It was a nice opening volley. It gave me a taste of what Buffalo was like. And I loved it.”

Robitaille was born in 1948 in Midland, a small town on Georgian Bay in central Ontario. (John Muckler, the former Sabres coach and general manager, also hails from there.) Robitaille played junior hockey in Kitchener, Ont., then caught on with the Omaha Knights, in the Rangers farm system, for the 1968-69 season.

He was named most valuable defenseman in the Central Hockey League in 1969-70, when he led the Knights to a playoff championship. That seemed like a nice ending to his season, but the Rangers had other ideas: They sent him to the Bisons, who were still in the AHL playoffs.

“According to the rules, you couldn’t add anybody at that stage except for injury,” Robitaille said. “So they brought in a guy, I don’t want to say who, and they told him, ‘You now officially have a broken foot. You’ll get all your playoff money, your share, but that’s the way it’s going to be.’ All so they could get me into the lineup.”

Robitaille said he felt bad about that. So did his new teammates. The player he replaced was 35 and had played nearly 80 games for the Bisons that season, including seven playoff games.

“The players all loved him, and all of a sudden this cocky little (jerk) from Omaha, with a face full of pimples, comes in and takes his job,” Robitaille said. “So it didn’t go over well with a lot of guys. But that was just another thing I had to fight through.”

Robitaille had four assists in five games with the Bisons, and four of those games came in the sweep of the Kings in the finals.

“A championship is a championship, no matter what level,” Robitaille said. “It was one of the thrills of my life to win two in one year. That’s something (Bobby) Orr didn’t do.”

Robitaille played four regular-season games for the Rangers in 1969-70 and then 11 more for them the next season, before they traded him to Detroit. Then, after that season, the Red Wings traded him to the Sabres.

“People in Buffalo related to me right away,” Robitaille said, “because I’d played for the Bisons.”

He felt right at home — and soon he and his wife, Isabel, made Western New York their home year-round. He believes he was the first Sabres player to do that.

Robitaille was beginning his fourth season with the Sabres when he got traded yet again, this time to the Vancouver Canucks. He played three seasons for them before calling it a career.

“Vancouver is a very wealthy city. Standoffish,” he said. “Not like Buffalo, where they wrap their arms around you.”

When his father died in 1973, Robitaille placed his Omaha championship ring in the coffin as a tribute to the man who’d raised him. He still had his Bisons ring, but not for long: It went missing on a road trip to New York to play the Rangers during his time with the Canucks.

“Years and years later, the phone rang at my wife’s business,” Robitaille said. “This guy in western Canada had bought it for 50 bucks or something and put it away in a big box of rings, until one day his wife said, ‘This guy’s name is on this. You should give it back.’ ”

The call came in to Robitaille Real Estate, his wife’s business in Williamsville.

Robitaille was thrilled to have it back. He said he later spoke by phone with the memorabilia dealer and asked him to describe the man who’d sold it to him.

“The description fit one of my (Vancouver) teammates to a T,” Robitaille said, “so I know who it was. I’m not going to tell you his name, but he was in my room in New York the night it disappeared, before we all went out for drinks or dinner.”

The returned ring had a crack in it, so Robitaille took it to a jeweler.

It’s not. The ring is older than the Sabres. And Robitaille wears it proudly.

It symbolizes the door that opened to the place he calls home.

A hockey whodunit: Is this $10,000 puck the first goal in Sabres' history?

“This is genuinely a piece of history,” Lelands president Mike Heffner said. But collectors are skeptical.

Mike Robitaille received this ring as a member of the Buffalo Bisons following their championship in 1969-70. The ring was stolen from his hotel room in New York before he recovered the keepsake from a memorabilia dealer in Western Canada. (Photo courtesy Mike Robitaille)