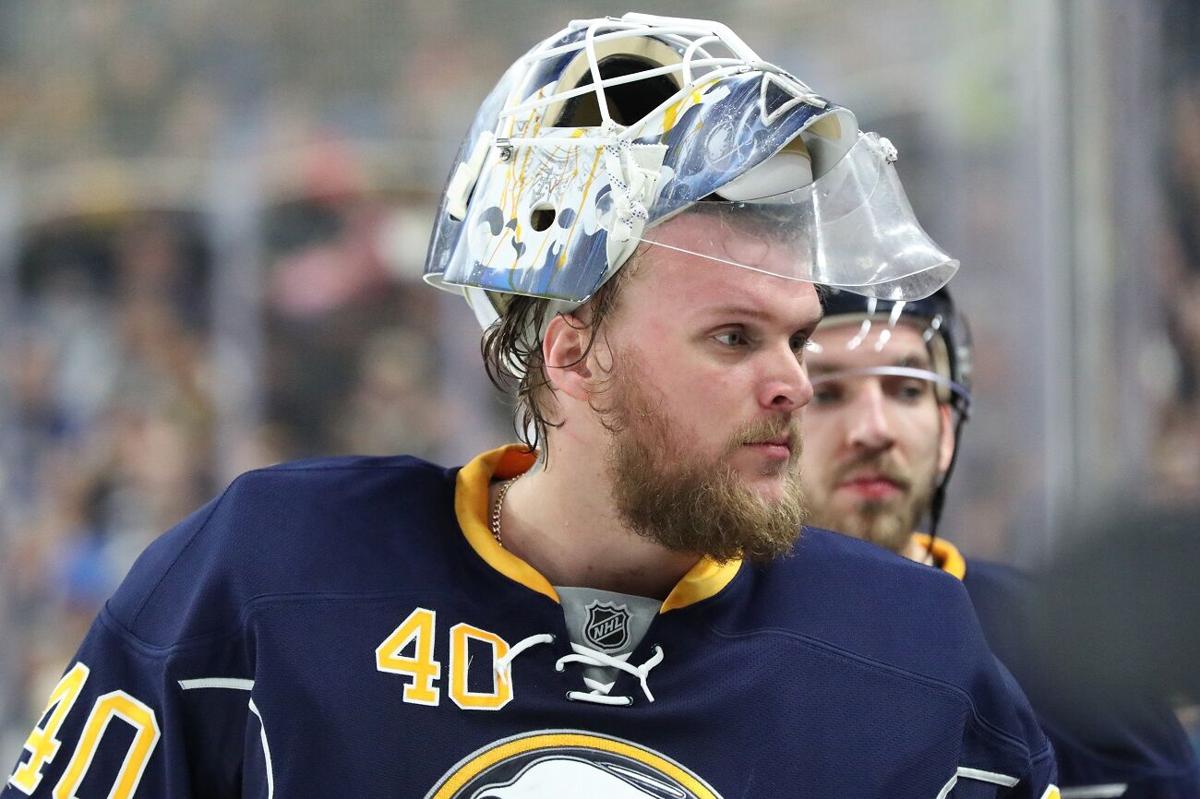 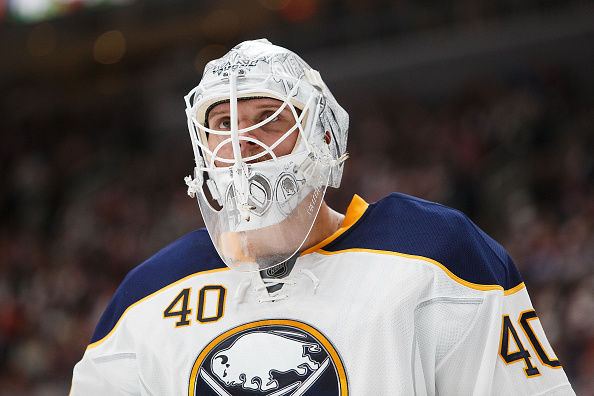 Former Sabres goaltender Robin Lehner was dealing with injuries and inconsistency last season before the Sabres decided to walk away from his contract in June.

As it turns out, he was dealing with much more.

In a chilling first-person story written for the Athletic New York and published Thursday, Lehner has revealed he left the team at the end of last season because he was diagnosed "bipolar 1 with manic phases" and traveled to The Meadows, a suburban Phoenix facility, for treatment of alcohol abuse.

"It was extremely hard," Lehner said of writing the article as he spoke to New York reporters Thursday upon reporting to the New York Islanders' camp in Sayville. "The main reason I did it was hopefully it helps somebody else. It's been an emotional couple of days."

Lehner's final game with the Sabres was the March 29 loss to Detroit in KeyBank Center. Lehner left that game after the second period and the team reported he had a recurrence of a lower-body injury. Lehner was not seen around the dressing room the rest of the season.

The issue became more strange when Lehner was not in the building for the team's locker cleanout day 10 days later, with reporters told Lehner was getting a second opinion on his injury. Traditionally, even injured players attend that session. Lehner always enjoyed his interaction with reporters and it was odd that he was not in the room to discuss his struggles on the ice and the early end to his season.

Lehner, 27, reveals in the story he called goalie coach Andrew Allen the night before the game and told him he was "in a bad place" and didn't know if he would be able to play. Lehner said he began to feel exhausted in the first period of the game and tried to gather himself in the dressing room between periods. In the second period, he started to feel chest pain and blurred vision and began intently watching the scoreboard clock tick down.

"When zero finally hit, I walked back and sat in in the trainer’s room. I could barely get my gear off," Lehner wrote. "I broke down. I was having a major, full-blown panic attack. I thought I was suffering a heart attack. I had no idea what was happening. I could not go back on the ice."

Sabres Notebook: Team has Lehner's back in wake of revelations

Lehner said he talked to GM Jason Botterill and the team sent him home but he did not want to go to the hospital for fear the media would find out. Lehner said he got beer on his way home, drank heavily, and then woke up in the middle of the night and told his wife he had to seek treatment.

Lehner revealed he had been having suicidal thoughts and was dealing with depression. He reported drinking a case of beer a day and needing pills to sleep before finally calling the NHL/NHLPA treatment program to get help and head to Arizona.

"It's tough. That's one thing in sports that a lot of people don't see," Sabres defenseman Zach Bogosian said Thursday at the opening of the team's camp. "You see on TV at 7 o'clock the bright lights and everything is great. You're getting paid to play a great game for a living but there's a lot of things that go on away from the rink that a lot of peopole don't understand or see. It is tough to see a teammate you care about go through stuff. It is good to hear he's doing well. I played with him for three years and I have nothing but good things to say about him."

Lehner had played for the Sabres for three seasons after splitting time with Ottawa and Binghamton of the AHL over parts of the previous four years. His hockey career and life at a crossroads, Lehner still felt suicidal but pushed himself to get on the plane to Arizona.

The start at The Meadows was difficult.

"Did I mention I had been taking sleeping pills to sleep almost every night for seven years?" Lehner wrote. "My detox lasted three weeks in that room. I was told my detox was one of the worst that they had seen. I had not had an honest sleep in so long, my mind was in shock. I was hallucinating, fighting demons in my mind and having extreme and vivid dreams. "

Lehner said he had manic episodes, which left him so high he didn't even need a game-day nap. But those moments would eventually crash.

"Then the other extreme was depression, which was total hell," he wrote. "I could not function properly doing basic life skill stuff without a lot of effort. If I really needed to get something done and didn’t want to really do it, it would not happen. Family didn’t matter. Nothing did. I was always so paranoid in this stage. I felt that everyone was against me and wanted to hurt me. I was constantly angry, irritated and tired. The depression didn’t just affect my mind but also my body. I was physically hurting every day. I didn’t want to practice. I barely wanted to play in games."

Sabres center Jack Eichel said Thursday he's spoken to Lehner several times in the summer and was happy to hear his former teammate went through the rehab process.

"As a group we kind of gave him his space and allowed him to address that," Eichel said. "He reached out to me whenever he felt it was the right time. I spoke with him on the phone for a little bit just talking to him. It's really good to see he's doing well and on a better path. Obviously we had a personal conversation and talked about a lot of things. It's nice to see. He's a really good guy and he was a good teammate to us."

Lehner wrote after the initial three-week period, he stayed at the complex in Arizona for another four weeks. He underwent therapy and found religion to the point he was baptized.

"Take hockey out of it, it's good to see personally he's doing well," Bogosian said. "At the end of the day, that's what you live for. You're trying to raise a family, support your family. It's good to see he's in the right frame of mind now and gotten help."

The Sabres walked away from Lehner's contract as a restricted free agent, a rarity in hockey made even rarer by the fact former GM Tim Murray gave up a first-round draft pick to acquire Lehner in a trade with Ottawa on draft day in 2015. Instead of a great season leading to a big-money deal, Lehner was a free agent and took a one-year, $1.5 million contract with the Islanders.

"One of the hardest things now was getting back to hockey," Lehner wrote. "I am an addict that was diagnosed as bipolar and ADHD with PTSD and trauma. I had never had a sober season of hockey my entire career. Those manic swings, I could see the pattern. When I was hypomanic and in a good mood, I was a solid goalie. The depressive state, not so much."

"It's never good to see somebody you care about going through that stuff," Eichel said. "I'm happy to see him get another opportunity and it's great to see him working things out and I wish him all the best."

Lehner had high praise for the way Botterill and the Sabres handled his situation and for the way Islanders GM Lou Lamoriello welcomed him with an offer to continue his career.

"During this whole process our GM in Buffalo was so incredibly supportive," Lehner said. "We met when I came back and had a great and productive discussion. Jason and the Sabres organization had decided to move on from me as their goalie and, in the end, my family and I thought a restart would be the best thing. I still wanted to stay if they wanted me. But deep inside I knew changing scenery would be the best thing for my recovery. My relationship with Jason didn’t end in that meeting."

Speaking today on WGR/MSG's "The Instigators" Botterill said he continues to support Lehner in his recovery.

"I thought it was a very powerful article that Robin wrote," Botterill said. "I'm

very happy it's been a really good summer for him. The biggest thing is Robin is really trying to be a great father. That's why I've tried to support him as much as possible."

Adams traded Hall and retained half of Hall's $8 million cap hit and traded Curtis Lazar. And didn't get a first-round draft pick in return.

Here are five things you should know about Anders Bjork, the winger acquired by the Buffalo Sabres in the trade that sent Taylor Hall and Curt…

Mike Harrington: The education of Kevyn Adams won't be a straight-line process

"Whether we like it or not, the Buffalo Sabres have a general manager undergoing on-the-job training. The education of Kevyn Adams took yet another twist the last couple of days," writes Mike Harrington.

What's next for the Sabres with Jack Eichel done for the season?

The former second overall draft pick is expected to be ready for the start of the 2021-22 season.

Montour, who turns 27 on Sunday, is a pending unrestricted free agent and has totaled five goals with nine assists while averaging 20:32 of ice time across 38 games this season.

Taylor Hall and Curtis Lazar were dealt to the Boston Bruins in exchange for former fifth-round pick Anders Bjork and a second-round pick.

The Wraparound: Ullmark leaves with injury in Sabres' shootout loss

Though Ullmark's absence loomed large, the Sabres withstood the bruising Bruins' blitz, tying the score in the third period before losing 3-2 in a shootout at TD Garden.

Sabres' Jack Eichel will 'still be out for a while,' GM says

"He was again recently looked at by the doctors. There's been a slight improvement from before," Adams said. "That’s as far as I want to go. Where that puts him in terms of return, we’ll have to see."

Mike Harrington: Sabres doing their jobs, now it's time for GM Kevyn Adams to do his

"Memo to the GM: The coach and the players are doing their job. A lot of them are new to this. You're new to your gig, too. Show us what you've got," writes Mike Harrington.