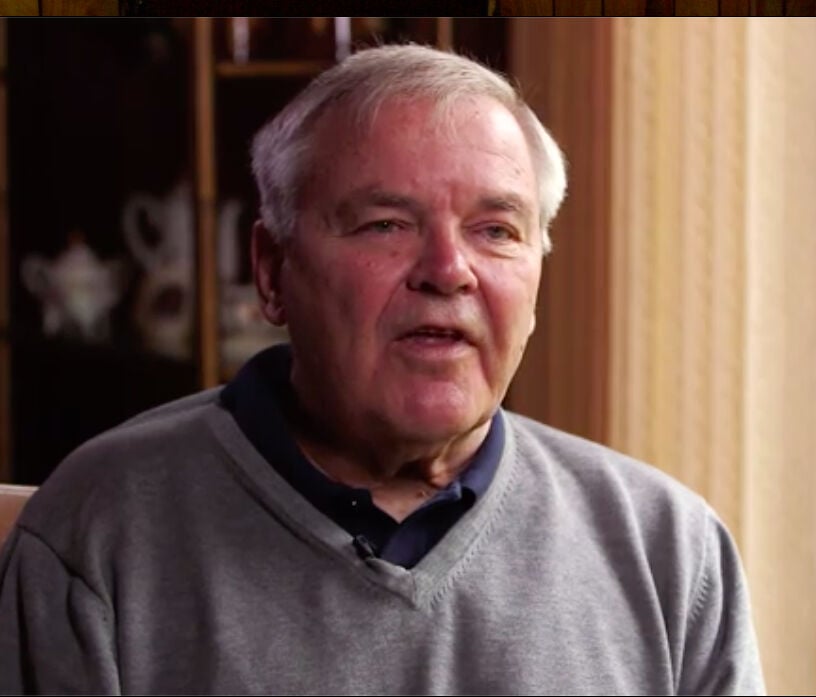 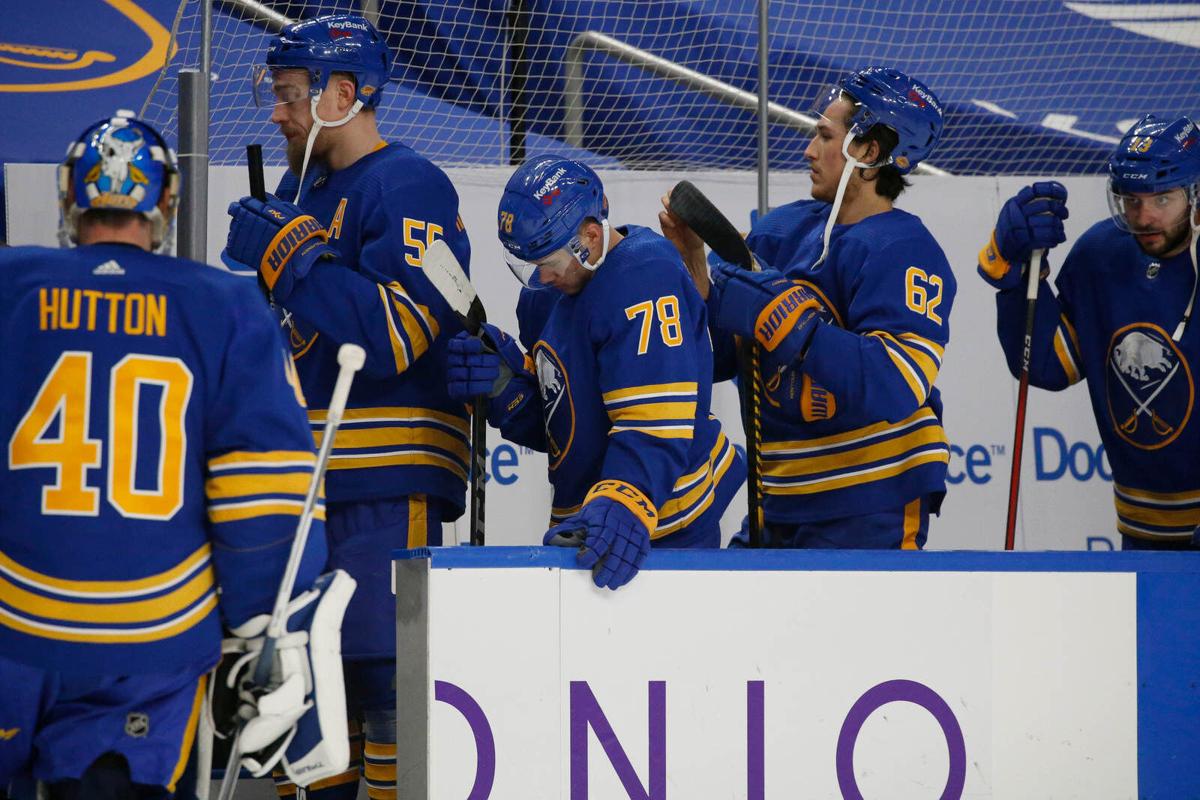 The Buffalo Sabres head to the dressing room after losing 6-0 to the Washington Capitals at KeyBank Center, Monday, March 15, 2021.

The Buffalo Sabres are their own April Fools’ joke these days. But there was a time, many years ago, when April 1 was a red-letter day for our blue and gold.

Paul Wieland was public relations director for the Sabres then. He was the sort of guy who thought of April Fools’ Day as a holiday worth celebrating. Still does, actually. Today he’s here to offer another high-concept hoax for your springtime amusement:

“The Buffalo Sabres today announced a new program to assign players who are not performing well to work as hand frackers for Pegula Enterprises, benevolent owners of the NHL franchise. … Hand frackers from the Sabres roster will see their hockey sticks converted to lightweight shovels so they will be able to scoop out the earth” underneath Chestnut Ridge Park. “It is expected that nearly all the current Sabres roster will go on fracking duty.”

You can find the complete release, in all its phony-baloney glory, on a Facebook page that Wieland recently created called “Sabres Success.” This release – like the ones Wieland sent out in his official capacity decades ago – is expressed in the flat, matter-of-fact tone of an actual public relations missive, which is a large part of what makes it so darn funny.

Just don’t think that Wieland takes the Sabres’ 18-game losing streak that ended Wednesday night as a laughing matter. He very much does not. It’s just that a joke is the best way for him to express his anger these days.

“I’m doing it with humor, I suppose, but I’m really irritated as hell,” he says from his home in Great Valley. He is a retired journalism professor at St. Bonaventure University, his alma mater. “I’m one of the last people alive who was there with the Sabres at the beginning. I’m literally one of a dying breed. So I’m trying to have fun with it. Otherwise I’d be really ticked off.”

Think of this original Sabres employee as a Buffalo original – in the sense that Thelonious Monk was an American original. Wieland worked not in jazz but as a corporate spokesperson, which is normally not thought of as a jazzy profession. But he made it so with his mission to boost the profile of an expansion team by showcasing it as a franchise full of fun.

Wieland, 82, was a reporter at the Courier-Express and the Buffalo Evening News before he moved into public relations with General Motors. In 1970, the newborn Sabres hired him as their first public relations director, which turned out to be a stroke of corporate genius. Here was a guy who could make saves (as a practice goalie) and make waves (as a practical jokester).

Witness his annual April Fools’ news releases. These were sent to local and national media outlets on official Sabres letterhead, but with crucial clues that the news therein was, in fact, fake. First was the notation at the top: “For release April 1.” (The usual notation is: “For immediate release.”) And second was, well, the sheer bombast of the claims. No one could really believe these.

• One year Wieland’s release said the Sabres had purchased the USS Little Rock from the Naval and Servicemen’s Park for a team yacht, and that general manager Punch Imlach planned to use it as a summer training vessel. Then a New York Times columnist wrote that one reason NHL ticket prices were so high was extravagances such as the Sabres buying a used Navy ship.

• Another year, Wieland announced that President Ronald Reagan had named the Sabres as “America’s Hockey Team.” The release included a mocked-up Time magazine cover and a counterfeit White House proclamation – dated April 1 – over what appeared to be Reagan’s signature. The Associated Press in Washington called to say that Wieland had committed federal offenses: use of ersatz White House stationery and attaching the president’s name to a letter he hadn’t written. Did he have a comment? Bring it on, Wieland said, figuring this would make the kind of national news he wanted for his franchise of fun. Alas, he never heard from the authorities.

• Perhaps Wieland’s finest April Fools’ hoax was Sliderex. His release said the Sabres were putting down a new plastic ice surface at Memorial Auditorium, and that Sliderex had been developed in a cow barn in Pictou County, Nova Scotia, by one Ramsay MacDonald. (Wieland borrowed the name from a former British prime minister.) When the Canadian Press called NHL commissioner Clarence Campbell for comment, he said: “Of course the NHL always operates on the edge of technological change, so this is just another step forward in making it a better game.”

Campbell wasn’t the only fool who got fooled. One Buffalo sportscaster reported it, on March 31, as an exclusive. When Wieland confronted him about breaking the release date, the sportscaster said he had his own sources — which in itself was even funnier than the notion of skating on plastic. We’ll not mention his name, though you can find it in Wieland’s 2019 book “Taro Lives! Confessions of the Sabres Hoaxer.”

The Taro of the title, of course, is Wieland’s most famous hoax. This one came not on April Fools’ Day but on NHL draft day, in 1974, when the Sabres selected center Taro Tsujimoto of the Tokyo Katanas in the 11th round.

“Taro didn’t exist,” Wieland wrote in his book. “I made him up, and he’ll be in the lead in any obituary about me.”

We pray such is a long way off. We need Paul Wieland. April 1 needs him. Heck, the Sabres need him.

He is, after all, an emblem of a bygone era when the world laughed with them, not at them.

Several Western New York restaurants have joined in on the annual fun.

Erik Brady: Rick Azar was truly one of the greats. Just ask 'The Great One'

The people you see on TV are often not the same in person. Rick was the same guy, always.

Buffalo Bisons legend Jeff Manto is to be introduced Monday as manager of the Trenton Thunder, but now the Thunder will have to find somewhere else to call home.

The Buffalo Sabres head to the dressing room after losing 6-0 to the Washington Capitals at KeyBank Center, Monday, March 15, 2021.