The French Connection was the greatest forward line in Buffalo Sabres history.

“The French Connection” was the best movie of 1971.

That forward line, named for the movie, is much on our minds these days. We lost Rene Robert last month. We lost Rick Martin 10 years ago. Gilbert Perreault is our last link to a line that lives in memory – and in bronze.

The NHL draft begins Friday night. The Buffalo Sabres have the No. 1 overall pick, as they did in 1970, when they selected Perreault. This draft marks 50 years since the Sabres selected Martin with the fifth overall choice. And then there was Robert, who came not by draft, but by trade.

That grand larceny of a deal – Eddie Shack, at 35, straight up for Robert, at 24 – was made on March 4, 1972. A few weeks later, at the Academy Awards, “The French Connection” was named best picture. This confluence of events would later lead to the best nickname for a forward line in the history of hockey.

The movie is best remembered for its car chase. Detective Jimmy “Popeye” Doyle, played by Gene Hackman, careens his Pontiac down teeming streets in Brooklyn to catch a crook who has hijacked an elevated train. Roger Ebert, the late film critic, believed the thrill of that chase was so memorable that moviegoers sometimes forgot that the rest of the movie was really good, too.

So much so that on April 10, 1972, it won Oscars for best picture, best actor (Hackman), best director (William Friedkin) and best screenplay and editing.

The Sabres’ second season had ended six nights earlier. One year later, to the day, Robert scored in overtime – with assists from Perreault and Martin – to give the Sabres a 3-2 overtime victory against the Montreal Canadiens in the Stanley Cup playoffs.

By then they were already well known as the French Connection – three musketeers, armed with sabre-sticks, who all hailed from Quebec. It is a name worthy of the line.

As the story is usually told, Lee Coppola christened them as such on a message board at the Aud. Those boards had space for just two lines, and Coppola used them to convey information with wit and style, like an expert headline writer working with a tight count. That’s fitting, because Coppola is one of the greats of Buffalo journalism history.

Like Perreault, he is a Hall of Famer – in Coppola’s case, the Buffalo Broadcasters Association Hall of Fame. But even before he worked as an investigative reporter for Channels 7 and 4, he was an award-winning print reporter for The Buffalo Evening News. That’s the era when Coppola did work for Sabres public relations director Paul Wieland, who called Coppola “Mel Moonlight” because he wrote for The News by day and for the Sabres by night – lighting up the Aud message boards like a concert pianist composing on the fly.

Rick Azar, another Buffalo Broadcasters Hall of Famer, offered an alternate history in “Tales From Azar’s Attic: A Look Inside a Broadcasting Career.” The late Channel 7 sports anchor wrote in his 2014 book that the use of French Connection for the Sabres’ swashbuckling line “was first heard on a 6:15 broadcast on Channel 7. Yes, my sportscast, but I can’t take credit for it.”

Azar instead gave credit to assistant news director Alan Nesbitt: “It was a stroke of brilliance. I couldn’t wait to lead with it. The lightbulbs in my head were flashing like crazy.”

Funny that Azar put it that way. The message board was lit by bulbs, too. And in popular culture, the symbolic representation of a great new idea is … the lightbulb.

So who really concocted this Edisonian ideal? Wieland credits Coppola, Azar credited Nesbitt – and maybe the answer is both, independent of one another. This much is certain: The name has stood the test of time.

So has Ron Moscati. He was a photojournalist for the Courier-Express when he got a shot of the French Connection in a 1975 playoff game that the sculptor Jerry McKenna later used to create the statue that stands outside KeyBank Center.

The movie was defined by speed. So was the forward line. And the spacing of speedy center with wingers left and right made it exceedingly difficult for a photographer to capture all three in a single frame midgame. Moscati did it. And now the Italian American shutterbug will join those French-Canadian linemates in the Greater Buffalo Sports Hall of Fame.

The hall’s newest class will be enshrined on Oct. 14 – five days after the 50th anniversary of the debut of the movie that started it all.

Erik Brady: The other time the Capitol was attacked, Buffalo was destroyed

The War of 1812 is a conflict that is commonly misunderstood, when it is remembered at all. The British burned all but a handful of buildings in Buffalo.

At the Atlanta Summer Games in 1996, the U.S. women's basketball team coached by VanDerveer went 8-0 with a record 102.4 points per game.

Erik Brady: When the wedding options include New York and LA, the answer is obvious: Buffalo

Traditionally, brides get home-field advantage. But Courtney Gaughan Bowman has never lived in Buffalo. And Doug Brady had never even been here. But they are having their wedding here this weekend.

When former Buffalo Sabre Gerry Meehan moved next door to Mark Miller in the 1970s, it sparked the beginning of Miller's life as a collector.

Mahomes and Hurts to make history at Super Bowl LVII

Mahomes and Hurts to make history at Super Bowl LVII 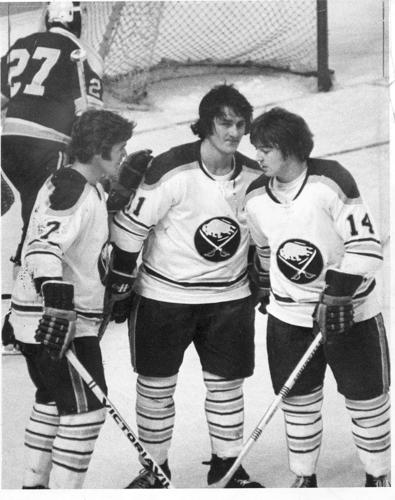 Rick Martin, Gil Perreault and Rene Robert combined for 131 goals in the 1974-75 season. 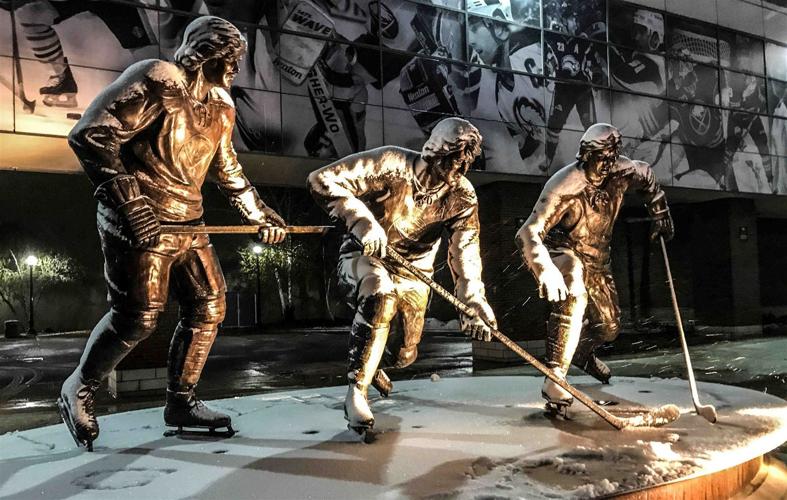