Support this work for $1 a month
Mike Harrington

TORONTO – There will be some history for sure on one side Tuesday night in Scotiabank Arena. The Buffalo Sabres will be trying to avoid history taking place on the other side as well.

As Owen Power makes his highly anticipated debut on the Buffalo defense, he's likely to have some shifts against the NHL's hottest scorer. And Toronto center Auston Matthews will be gunning for some slots in his franchise's record book when the Sabres and Maple Leafs meet at 7 p.m. in Scotiabank Arena.

Matthews enters the night with 58 goals, 41 assists and 99 points in 67 games. He's one point shy of his first 100-point season and only the fifth in Maple Leafs history. The four previous ones were all by Darryl Sittler and Doug Gilmour, the last by Gilmour in 1993-94. Matthews broke the franchise's single-season goal record with his 55th of the year Thursday in Dallas, breaking the mark of 54 set by Rick Vaive in 1981-82.

It's a huge challenge for the Buffalo defense and a massive one for Power to face in his first NHL game. Power took an optional morning skate in advance of the contest and is expected to be paired with Henri Jokiharju.

"I've watched him enough over the years and got to know him enough that there has to be trust from my side," coach Don Granato said of Power. "He needs games like this. He needs environments like this. And the more we can get in situations like this, the faster his acclimation is going to be."

"There's gonna be a lot going on in his head so just try and simplify as much as he can and just play," said winger Kyle Okposo. "He seems like such a calm guy. I'm sure he's a bit like a duck on the pond: Calm exterior but things are going on under the surface. But you would never be able to tell it on the ice. He's just smooth, seems like it's been in the league a long time."

Power is one addition to the Buffalo lineup. Granato was talking to reporters during his team's optional skate and declined to offer hints about his lineup's construction or who the starting goalie will be. The Leafs are starting rookie Erik Kallgren in net. Buffalo is 0-3 on this road but has won its last two meetings with Toronto.

What's the ceiling for Matthews this year?

"I don't know," said Leafs defenseman Justin Holl. "He's out of control. But we like it."

Said Granato, who coached Matthews for two years with the US National Development Program: "The scary thing is I see signs he can do more."

Leafs coach Sheldon Keefe marveled at Matthews' recent play, which features 51 goals in his last 50 games, a first for an NHL player at any point in a season since Mario Lemieux in 1996.

"It's just been so fun to watch. And just to watch how our team has embraced it," Keefe said. "The goal scoring is getting a ton of attention as it very well should but  Auston does a ton of things when he's not scoring to help our team win."

Matthews has 19 points in 18 career games against the Sabres, including 12 goals. But he has not been much of a factor thus far this season against Buffalo. In three games, he has just points – and a two-game suspension for his cross-check to the neck of Rasmus Dahlin during the Sabres' Heritage Classic win March 13 in Hamilton.

"The outdoor game was a home game for us but it was in Canada and the outcome favored us," Granato said. "So I'm sure there's lots of people that remember that very well. Foremost the team we're playing. And they're a bunch of competitive people over there."

"They're gonna come out hard," Okposo said. "The outdoor game didn't go well for them and they've been playing great lately (10-2-1 in the last 13) so we know they're going to us their best and we look forward to the challenge."

Kyle Okposo, Tage Thompson, Jeff Skinner and Rasmus Dahlin scored for the Sabres (27-37-11), who snapped a three-game skid and defeated Toronto three straight times for the first time since April 1, 2015 to March 7, 2016. Craig Anderson made 22 saves in goal, and Rasmus Asplund added an empty-net goal with 2:18 left in regulation.

Mike Harrington: Sabres got the Power, so they're going for the gusto on 'D' right away vs. Leafs

That assumption they fostered about bringing Owen Power along slowly, letting him get his feet wet in the NHL while probably playing third-pair minutes alongside a veteran journeyman like Mark Pysyk or Colin Miller? Not happening.

Goals by Corey Perry and Ondrej Palat in a 17-second span in the first half of the first period put the Sabres on their heels for good and the Tampa Bay Lightning blitzed Buffalo 5-0 at Amalie Arena.

The No. 1 overall pick's first steps with his NHL team took place during an optional morning skate after he signed his entry-level deal on Saturday.

Inside the NHL: Five things Sabres can do in the Owen Power lab the rest of the way

The pride of Michigan via Mississauga, Ont., is going to have a chance to play eight games this season, a veritable hockey lab for the Buffalo coaches to assimilate the No. 1 overall pick into NHL life on and off the ice and give him a huge head start on the 2022-23 campaign.

Dahlin knows the scrutiny that will follow Power. And while the Sabres’ dressing room is filled with players eager to help and support him, Dahlin has wisdom that can help Power through the highs and lows as a teenager competing in the best league in the world.

'There's a lot of excitement and there should be' as Sabres sign No. 1 draft pick Owen Power

The dynamic 19-year-old defenseman will join the club during its road trip and is tentatively scheduled to make his debut Tuesday night in Toronto.

Individually, Levi has accomplished more in college than most amateur goalies could dream. His 1.53 goals-against average ranked third in Division I. He posted a school-record 10 shutouts that was only two off the single-season NCAA record.

A memorable season by Power and the Michigan Wolverines ended Thursday night with a 3-2 overtime loss to Denver in the Frozen Four at TD Garden.

The collaboration between Portillo and three Michigan students led to their creation of Dualete, a platform that allows youth athletes to register for one-on-one video sessions in which college athletes detail how they excel in a specific sport. 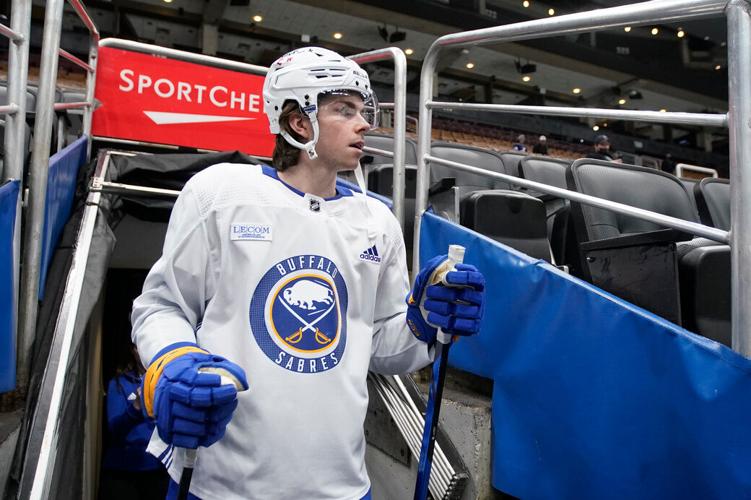 Buffalo Sabres defenseman Owen Power makes his way to the ice during a morning skate prior to playing the Toronto Maple Leafs at Scotiabank Arena on Tuesday, April 12, 2022. 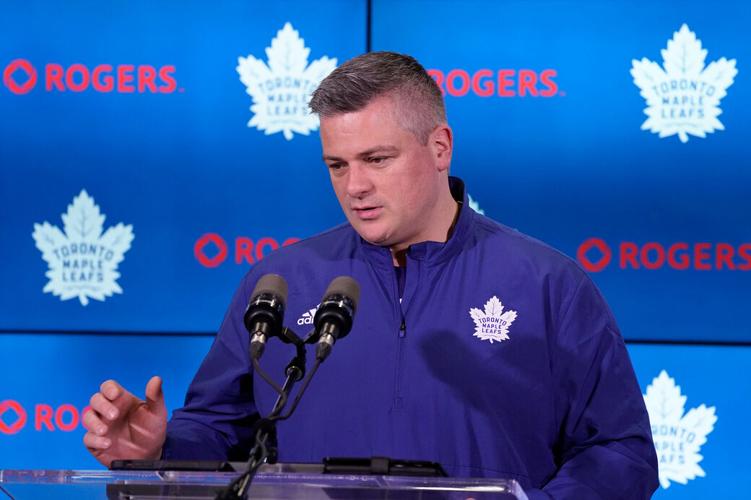 Toronto Maple Leafs coach Sheldon Keefe speaks to the media during an optional skate prior to playing the Buffalo Sabres at Scotiabank Arena on Tuesday, April 12, 2022 (Harry Scull Jr./Buffalo News)