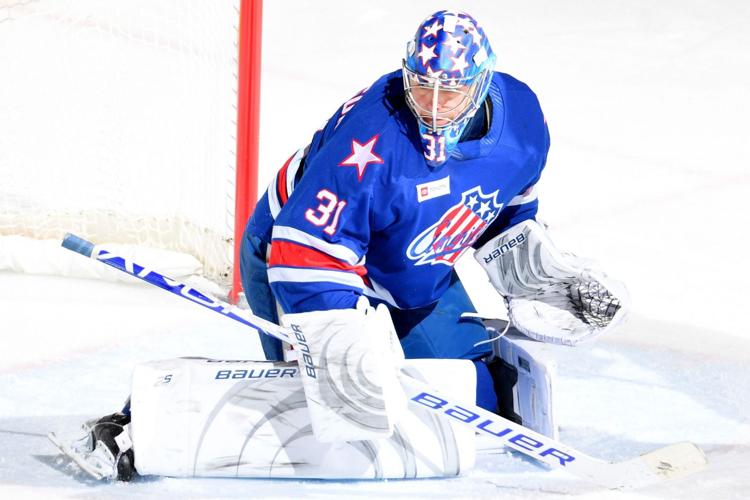 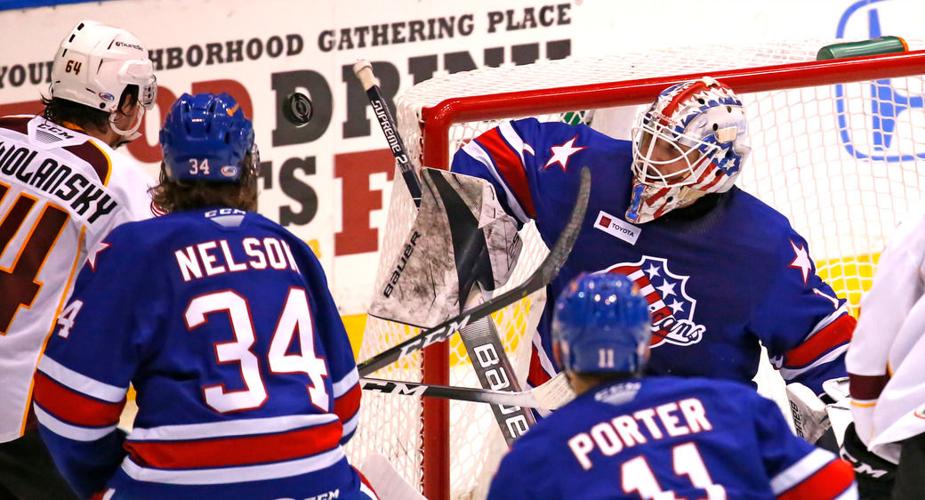 Support this work for $1 a month
By Bill Hoppe

Taylor told Johansson that he had been selected to represent the North Division in the American Hockey League All-Star Classic in Ontario, Calif.

“I absolutely had not thought of it,” Johansson, 24, said of being named an all-star.

At that point on Jan. 3, the Buffalo Sabres prospect had compiled a sterling 10-2-2 record and ranked second in the AHL in goals-against average and save percentage.

“It was one of those humbling moments to give a player that he acted so surprised and couldn’t believe it,” Taylor said of informing Johansson of his honor. “It just tells you what type of person he is and how grounded he is.”

When the season started, Johansson had played just 19 AHL games and was coming off knee surgery that required four months of rehabilitation.

The 6-foot-5, 219-pound Johansson spent most of his first two seasons in North America in the ECHL, only occasionally earning recalls to the Amerks. Last February, a torn meniscus ended his strong campaign with the Cincinnati Cyclones.

So Johansson, given his minimal experience and recent injury history, might rank as the unlikeliest of the 48 AHL All-Stars for Monday's game.

“He fought for his career, and that’s what I like,” said Seamus Kotyk, the Sabres’ goaltending development coach. “He laid it out on the line. … and he didn’t quit.”

Johansson, a third-round pick in 2014, 61st overall, has quietly developed into one of the AHL’s top netminders. He said this season has been the “most fun hockey of my career so far.”

Not only has Johansson morphed into a notable prospect, he and veteran Andrew Hammond, who has slumped recently, have formed a strong partnership.

“I really like it here,” Johansson said. “I like the team and my teammates and my colleague, Hammy. It’s just been really, really fun so far.”

“We weren’t sure he would be ready to perform to the same level he has this soon this season,” he said. “We thought it might take him until Christmas to get comfortable, keep his confidence. But he came to training camp in unbelievable shape, he was ready.

Sexton and Taylor have spoken about how much the organization values Johansson as a prospect. But Ukko-Pekka Luukkonen, the Ontario Hockey League’s MVP and top goalie last season, receives most of the attention from outsiders.

Johansson hasn’t been labeled the Sabres’ goalie of the future.

“People around maybe had lower expectations, and that probably helped me … to be a little underdog, I guess,” said Johansson, who has compiled a 12-3-3 mark with a 2.21 goals-against average, a .924 save percentage and two shutouts in 19 games this season. “It’s a little easier to play. I just try to not think about the expectations.”

Johansson said he has felt like an underdog most of his career. He spent most of 2016-17, his last season in Sweden, playing for Almtuna IS, a second-division team. He played 54 ECHL games before graduating to the AHL.

“He plays a few good games and then he’s off for a couple, and it felt like this year the consistency got stronger,” he said. “The gaps between a poor goal against or a poor game were smaller. He was regrouping.

“I like to say that he was eliminating those thoughts from his mind that were maybe there in the past. He just looked strong, he looked confident. There was a purpose, whether it was practice or a game, it was like he was set out to do something.

“That’s really what I noticed is right out of the gate the consistency was there, game in, game out.”

Johansson said he has tried to revamp his approach this season by blocking out any outside noise.

“I have no focus at all about what people think or expect,” he said. “I just try to … focus on myself. I feel like I’m finding my way there to have the right mindset.”

Johansson said he had no idea how much he would play this season.

“I just try to put everything like that aside and just be happy for every game I get,” he said. “So I don’t know if I exceeded expectations, really. I’m just really happy with how the season has gone so far.”

“Coming up midyear … the league always takes a step, and it was noticeable,” he said of the level of play. “The details, the habits, the foundational aspects of his game were just a step behind or a little bit off in practice.

“But that’s good, because it’s an eye-opener as to how do we want to restructure when we’re working with him when he’s with Cincinnati.”

Luukkonen, 20, posted a 3.38 goals-against average and an .887 save percentage during his brief stint.

“Overall, we’re happy, we’re satisfied,” Kotyk said. “It was a great test to see where he’s at. I’m sure there’ll be more opportunities moving forward.”

Five weeks ago, Andrew Hammond, 31, was perhaps the AHL’s hottest goalie. But since recording his fourth shutout in eight outings on Dec. 14, the veteran has lost seven consecutive starts.

Throughout his recent slump, Hammond said he has maintained the same approach he had earlier this season.

“I’m a person that tries staying very even-keeled when it’s going well and also when it’s not going well,” he said.

Hammond believes getting “too wound up either way” will take away from enjoying success.

“Even when things are going really well, and say you’re reading the news clippings or something, and everyone’s praising you, it’s easy to get caught up in that,” he said. “And then maybe you stop working as hard and worrying about the details of what makes you successful.”

Kotyk said Hammond’s demeanor has “been extremely valuable to him.”

“He has a level of professionalism that you always hope you see within your players,” he said. “He has an understanding of himself as a goalie, he knows what he wants to do, the style he wants to play and how he wants to practice and prepare.

The Amerks ended their seven-game losing streak Wednesday in Cleveland by beating the Monsters 3-2 in overtime.

They host the Laval Rocket on Friday before playing a road game against the Syracuse Crunch on Saturday.

Mike Harrington: Ben Bishop move was for accounting and Sabres should floor it to spend real money in goal

The Sabres still have to add to their defense and forward group, including deciding what to do with Victor Olofsson. The restricted free agent winger could be looking at an arbitration award and/or a bridge deal that could take him close to $5 million a year. On a short-term basis with all this cap room, no reason not to pay him for now and then see if you're going to keep him or include him in any NHL-level deals.

The bolstering of the prospect pipeline has helped brighten the long-term outlook of a franchise that's building around its young core in Buffalo.

Inside the NHL: Ex-Sabres captain Chris Drury is in good company as a finalist for GM of the Year

Drury is in heady company. The other two finalists are Colorado's Joe Sakic and Tampa Bay's Julien BriseBois. They haven't moved on to many draft thoughts yet as they'll be vying Sunday night in Game 6 of the Stanley Cup Final in Amalie Arena.

Alexander Mogilny was one of three former Sabres who continues to fall short in Hall balloting. Mogilny, whose 76-goal season in 1992-93 remains a franchise record and the most in NHL history by a Russian player, cracked the 500-goal mark for his career counting playoffs and won a Stanley Cup for New Jersey in 2000.

Mike Harrington: Avalanche have the Cup, but Atlantic teams like Sabres can't count out Lightning

Tampa Bay has played 71 playoff games in a 22-month stretch, an unheard-of run prompted by the league's Covid schedules. With a summer off to get healthy – and a salary cap in much better shape than it was after last season – the Lightning figure to be one of main contenders for the Cup again in 2023.

Where Sabres are scheduled to pick in 2022 NHL Draft

The NHL has finalized the order of selection for NHL Draft to be held July 7-8 in Montreal. The Sabres are scheduled to make 11 selections.

The Sabres development camp will be held July 13-16 at LECOM Harborcenter. The on-ice sessions July 13-15 are free and open to the public on a first come, first served basis.

When you think back to the 2015 NHL Draft, it was all going to be so simple. Connor McDavid to Edmonton, Jack Eichel to Buffalo and Stanley Cup dreams for the Oilers and Sabres by, oh, 2018 or 2019. It obviously hasn't worked that way

West Seneca native Sean Malone, who battled through injuries to post career-high offensive totals in Rochester, has re-signed with the Buffalo…

Hunt was inducted into the Brantford and Area Sports Hall of Recognition posthumously this month, which gives him a hat trick of halls, counting his memberships in the Greater Buffalo Sports and the Buffalo Sabres halls of fame.