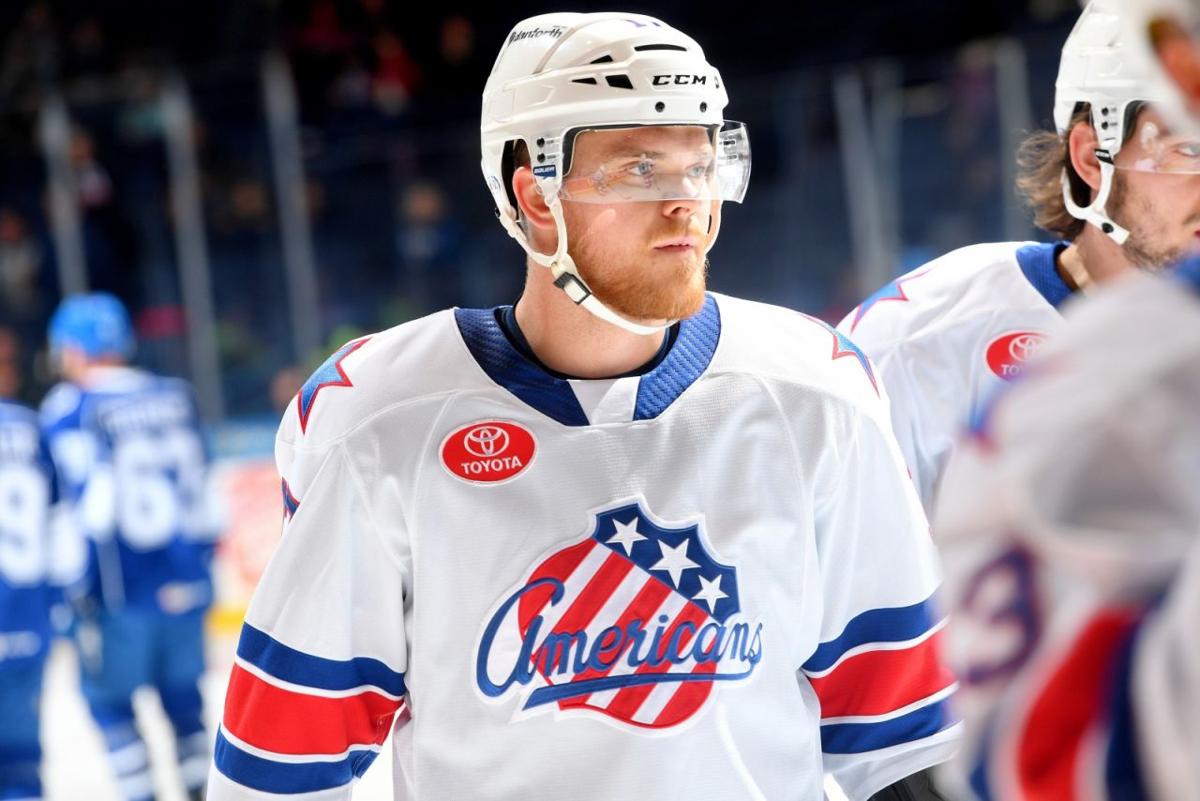 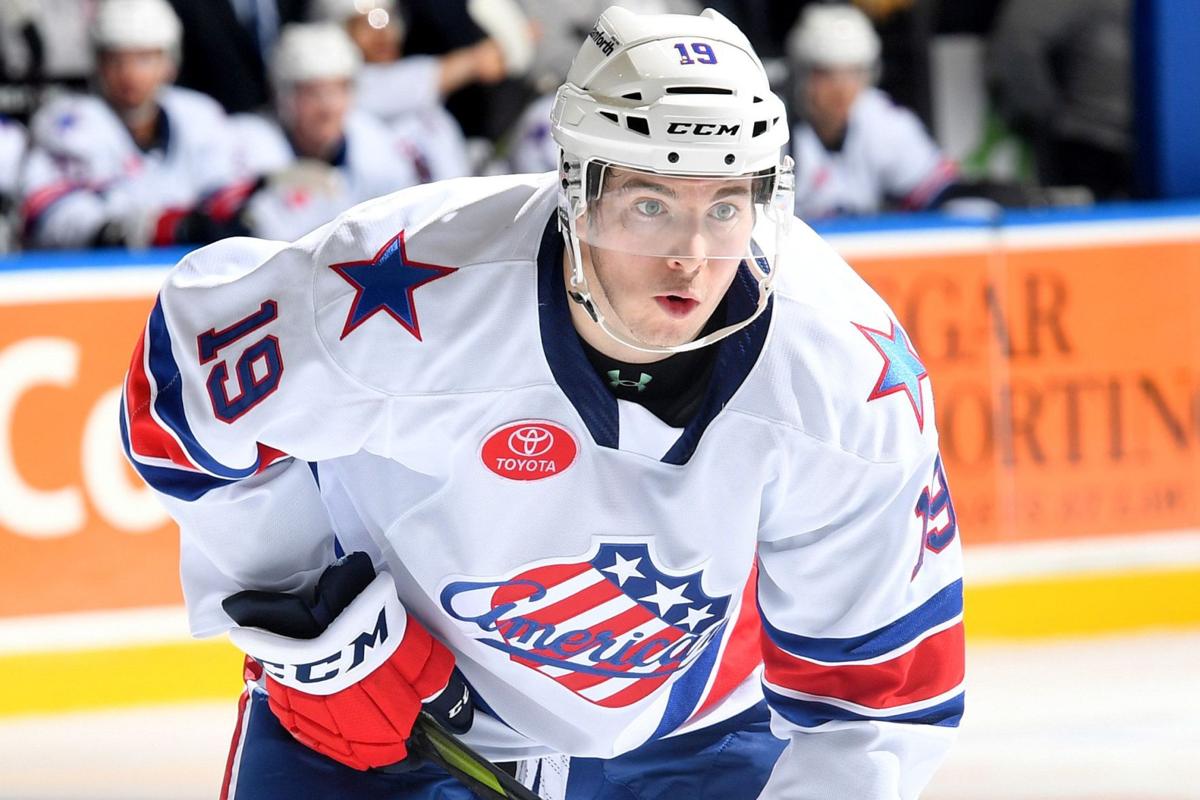 So for about a month, Malone, a Rochester Americans forward, said he got away from the sport and “talked to a lot of people.”

“I was able to mentally step away from everything, get my mind right,” Malone said.

These days, Malone, 24, sounds refreshed. Having compiled three goals and five points in his last five games, he’s enjoying perhaps the best start of his career.

“It’s been good,” Malone said the other day in Blue Cross Arena. “I feel a lot happier right now than I did last year, and I think it’s shown in my play.”

“Very hard,” Dineen of scratching Malone for Friday's 4-2 win against Binghamton. “The offensive side of things are one thing, and playing a complete game is another. He … realizes the things he’s got to work on to get back into it.

“The one thing is he’s healthy, he’s really got a resolve this year, so when he gets the opportunity, I know he’s going to change his game.”

It wasn’t that long ago Malone looked finished in the Sabres organization. In the span of a few months last season, he morphed from a prospect into an afterthought in the American Hockey League.

The injuries – he hurt his knee in Buffalo’s first preseason game before enduring upper- and lower-body problems – stymied his development, limiting him to 38 games. Following his appearances, he often looked beaten down by the mental and physical toll.

“It’s hard when you’re out for a long time, and then getting back and trying to get your confidence, getting hit with another thing,” Malone said. “I care too much about this game, and it (stinks) when it happens.”

Then in June, the Sabres did not give Malone a qualifying offer as a restricted free agent. Instead, he signed a one-year AHL contract.

“I just wanted to get my game back to where I know I’m capable of,” he said. “Obviously, it’s tough not getting qualified. But I think at the same time, they saw enough in me to bring me back.”

Dineen said Malone, who played one game with the Sabres in 2016-17 after leaving college, has embraced returning to Rochester on a minor-league deal.

“You’re kind of wondering how a guy would feel about it, and … he’s very excited about being back and getting another opportunity and being a part of this group,” he said.

“I was able to see the right people to help,” said Malone, who wouldn’t reveal with whom he spoke to.

Malone also learned to showcase a calmer style – “Not selling out,” he said – and make himself less vulnerable when he gives or receives a hit.

“Everyday body maintenance and stuff like that is so important, and I’ve been doing a good job of getting here early and putting in the work that needs to be done as a pro hockey player,” he said. “I had a really good summer. I think it’s paid for me mentally and physically.”

The versatile Malone has played nine games this season, moving up and down the lineup at center and wing.

“I have that mental ability to play different areas of the ice,” he said.

He began the season pivoting a checking line before moving up to left wing beside center Rasmus Asplund and Tage Thompson.

“I’m playing a little more, playing with some pretty good players – offensive players,” said Malone, who compiled 12 goals and 22 points as a rookie in 2017-18. “I know that I have the ability to produce offensively. Given the opportunity, I think I can succeed.”

If Malone plays on a scoring line, he could pile up more goals. A breakout offensive season might help him earn another opportunity with the Sabres.

“I’ve been proving myself my whole life,” he said. “I just want to prove to them that I deserve to be here and hopefully work my way up someday to an NHL deal.”

Forward C.J. Smith suffered a lower-body injury in first period of Saturday's game against Utica and is expected to miss "weeks," Dineen said.

Smith was hit and did not return to the ice.

"He’s somebody that we gear our team around as far as making other players better," Dineen said. "That’s a significant loss, and for him, too. It’s a year he wants to make an impact at every level, and so when you miss periods of time, that’s disappointing."

Zach Redmond missed practice early this week with a lower-body injury and his status for Friday's game vs. Binghamton is uncertain. Dineen said he hopes the injury is short term.

Also, Taylor Leier practiced Tuesday in a non-contact jersey, his first practice of the season after undergoing offseason labrum surgery. Dineen said Leier is progressing but did not have a timetable.

Levi is playing so well that it’s fair to wonder if he’s become the Sabres’ top goaltending prospect, ascending above Ukko-Pekka Luukkonen in Rochester and Erik Portillo at the University of Michigan.

Anderson, 40, has been out since Nov. 2, as the result of a collision in a loss at San Jose. He's on the current road trip with the team, but he is not practicing.

Sabres Notebook: Marquee callup is a thought if Casey Mittelstadt is out long term

Mittelstadt left Tuesday's game against Anaheim in the third period, walking gingerly down the dressing room tunnel with what the team fears is a recurrence of the upper-body injury he suffered in the season opener against Montreal that kept him out 21 games.

Asked directly if the fear is this is another long-term injury, coach Don Granato simply said, "Could be."

Did you have any idea the Sabres entered the game on pace to average more goals this year than any season since 2010-11?

With goaltending situation a mess, Sabres can get free look at Ukko-Pekka Luukkonen

The Sabres' goaltending situation is in tatters through a combination of injury, illness and ineffective play. Luukkonen is 6-6, 3.42/.888 during what has been a rollercoaster season for him in Rochester.

Luukkonen stopped 21 of 23 shots, but his teammates could not break through offensively in his season debut for the Buffalo Sabres as they fell to the Anaheim Ducks 2-0.