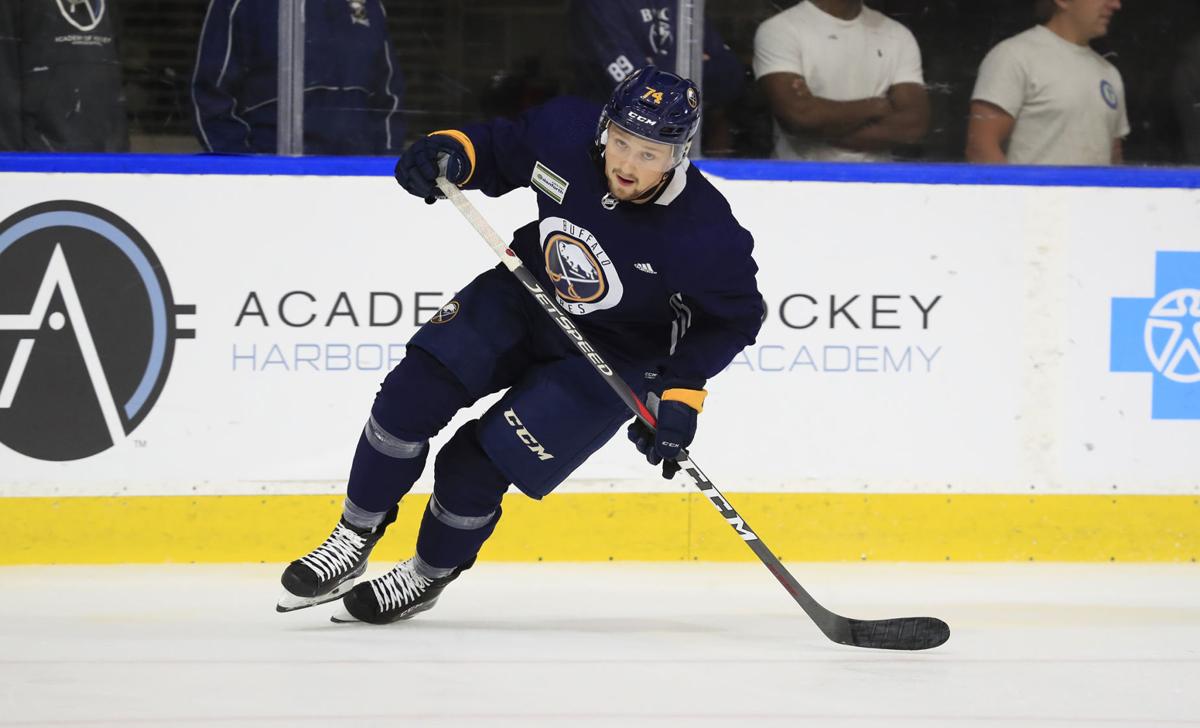 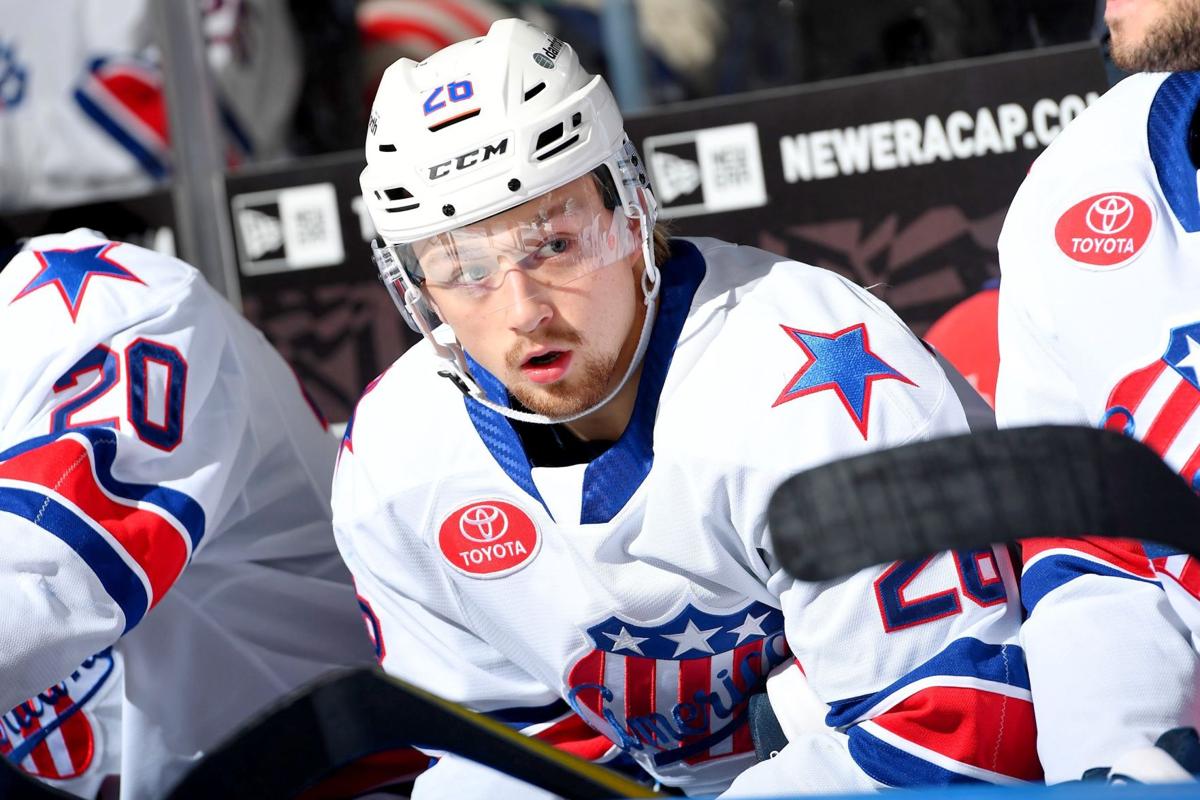 ROCHESTER – Chris Taylor wasn’t exactly sure what Rasmus Asplund meant by saying he has started playing more like a man.

Well, actually, Asplund, 21, recently shaved his goatee. It’s not that.

As Asplund has grown more comfortable throughout his first American Hockey League season, he has started showcasing more aggressiveness. Not surprisingly, that style has helped ignite the center’s offensive production.

In the last month, Asplund has morphed into one of the Amerks’ top scoring threats.

“I’m playing really well right now and I’m getting confident,” Asplund said recently. “I think I’m getting (to be) more and more of a man out there, too, playing like a man and playing the way I really want to play.”

The Swede’s recent exploits have helped solidified his status as one of the Sabres’ top forward prospects.

“He has adjusted to the North American game,” said a scout who has watched Asplund regularly this season. “His pace and skating have improved. He is a  smart player who is getting confidence and more opportunity to be an offensive player.

“The adjustment period is different for all players from Europe. He definitely is gaining traction offensively and has some upside.”

The 5-foot-11, 176-pound Asplund mustered just one assist in the first 16 games and one goal in the first 33 contests. He produced only three goals and 15 points in his opening 53 games.

Meanwhile, his linemates, Victor Olofsson and Danny O’Regan piled up goals and points.

But Asplund, a second-round pick in 2016 (33rd overall), looked like he had a future in the NHL long before he started scoring.

Before the season, Taylor told Asplund he would be judged on his overall game, not points. Taylor’s words helped him relax.

“It gets you confident in what you’re doing and you just don’t focus on the points,” Asplund said. “Of course, I want to (score) points, but it calms you down a little bit knowing that they just want you to play well.”

So following four seasons in the Swedish Hockey League – he started competing against men at just 17 – Asplund quietly began impressing Taylor with other parts of his game.

These days, Taylor said Asplund is “maturing right in front of us.”

“He’s been mature,” Taylor said. “But on the ice, he’s getting more mature. (It’s) the understanding of where to be, when to be there, wanting to be on the ice at certain times, even getting a little gritty out there and protecting himself and each other.”

In late February, Asplund started taking the puck to the net – “I didn’t do that in the beginning of the season,” he said – and utilizing his shot more often.

Earlier in the season, Asplund regularly registered zero shots on goal or just one. Now, some games he pumps three or four on net.

“It’s creating more and more space for his wingers,” Taylor said of Asplund’s penchant for shooting. “He was always looking to pass first.”

He added: “He’s got a terrific shot. He just needs to use it a lot more.”

Taylor said Sabres forward prospect Matej Pekar, who was assigned to the Amerks on Tuesday, will continue his rehab from a broken collarbone in the AHL.

Taylor said Pekar will start by doing off-ice work and joining the Amerks on the ice after practice for skills work. After that, the team will see how he’s feeling.

“Show him what pro hockey’s all about, the daily life of it,” Taylor said.

Check on the standings

The Amerks dropped two games over the weekend to the league-leading Checkers in Charlotte, falling 4-1 on Friday and 3-1 on Saturday.

The Checkers scored a power-play goal in both games.

“Five-on-five, we outchanced them and had a lot of opportunities and didn’t execute. That’s the bottom line.”

The Checkers, who have earned 41 wins and 94 points through 64 contests, won all four meetings with the Amerks this season.

The second-place Amerks (83 points) trail the Syracuse Crunch by five points for first place in the North Division. Both teams have played 64 games.

Some significant mistakes led to the 5-4 loss to the Dallas Stars, but Jack Quinn and Dylan Cozens tallied goals as the Buffalo Sabres showed the outlook is bright for a franchise that’s in jeopardy of missing the Stanley Cup Playoffs for a record 11th season.

Houser was active in his crease all night, moving well laterally and getting to rebounds quick in the Buffalo Sabres' 3-1 victory, which included goals from Dylan Cozens, Mark Jankowski and Alex Tuch.

Michael Houser in goal, Tage Thompson out for Sabres in fan-less Ottawa

While Houser's return to an NHL net is the big story on the ice, there's also major news off it for the Sabres on the injury/Covid-19 front as center Tage Thompson and winger Vinnie Hinostroza will both sit out the game.

Aaron Dell delivers big hit, even bigger win for Sabres in return to the crease

The Sabres goalie, who struggled in his first stint with the NHL club this season, exceled in his return from Rochester – and hit the highlight reel.

If the Sabres ever want to get anywhere in the Atlantic Division, they first better conquer Ottawa and Detroit, Harrington says.

Jack Quinn picked up another goal for the Rochester Amerks on Tuesday without even playing a game and it gave him a significant career milestone.

The 23-year-old center appears to be one step closer to returning to the Buffalo Sabres' lineup.

Mike Harrington: Flyers are new for Rasmus Ristolainen but it has to feel the same

The ex-Sabres defenseman insisted he hasn't thought about the trade deadline but as a pending UFA, he better start.

"We had no problem putting him out there and using him," coach Don Granato said. "Back-to-back nights, he's a young guy, skating well and he's such an efficient skater, too. He plays efficiently there. So that was a reason for more minutes. Minutes are less taxing to him."

Just as the young core took flight, one of its prominent members became the latest Buffalo Sabres player on the injured list.