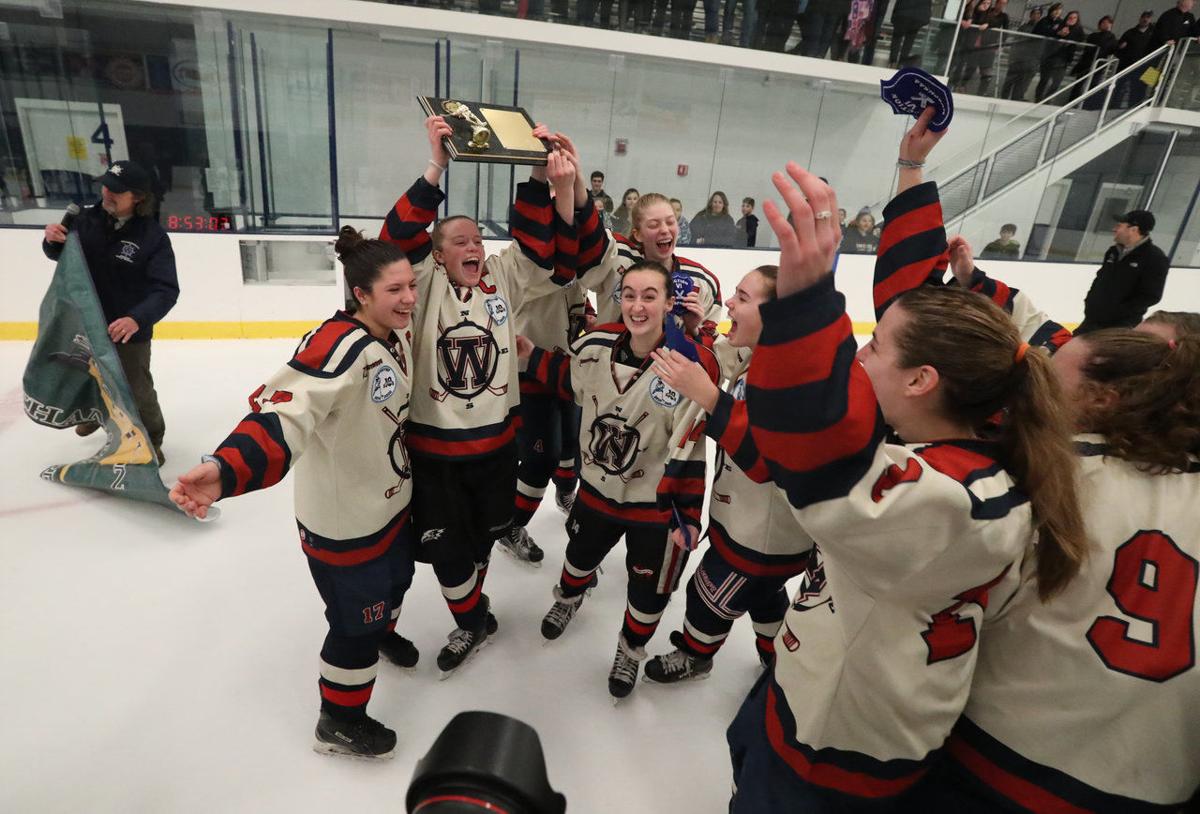 Williamsville players celebrate winning the Section VI title with a 3-2 overtime win over Kenmore/GI in the girls hockey at Cornerstone Arena in Lockport on Feb. 3. (James P. McCoy/Buffalo News) 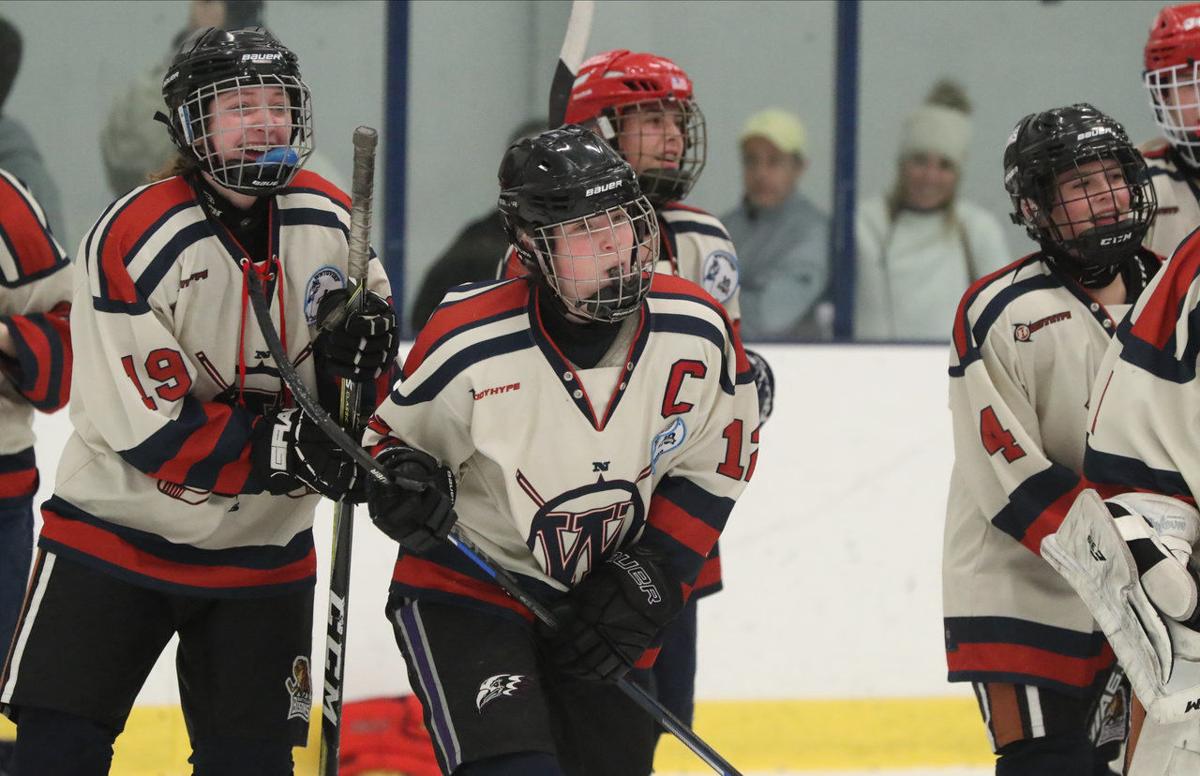 They had a “state champion target” on their backs all season, according to coach Rick Hopkins, but the Williamsville Fed hockey girls weren’t going to let anyone take what was theirs.

On Monday night in a packed Cornerstone Arena in Lockport, Williamsville won its second Section VI championship in as many years with a 3-2 overtime victory against Kenmore/Grand Island.

The Williamsville girls knew to expect a battle from a Kenmore/Grand Island team that upset its way to the finals, and that’s exactly what they got.

“We knew it was going to be a good game, and they definitely gave us a battle, going into overtime,” said Williamsville captain Emma Roland. “It was a lot of fun. We played our game, and it worked out.”

“We were definitely expected to win, but I was ready for anything,” said goaltender Mia Wendell. “I knew that was a good team over there, and we needed to be ready for the game.”

Roland’s performance included a hat trick that won the game for Williamsville. Wendell allowed two late goals in the first period, including Kaylynn Savoy’s go-ahead goal for Kenmore/GI with 13 seconds left in the period, but Wendell shut the door after that.

“First period was a little rough for me, I’m not going to lie,” Wendell said. “But my team picked me up and I knew that if they were there for me, I could be there for them in the second and third.”

Roland’s first goal came just 4:30 into the opening period, and when Kenmore/GI tied it and took the lead, Roland scored with just 1:34 left in the second period to tie it, 2-2.

Both Wendell and Kenmore/GI freshman goalie Carolyn Bourgeault kept their opponents scoreless through the third to force overtime in an already thrilling game.

Roland needed less than a minute to win the game for Williamsville. Her third goal came just 28 seconds into the 7 1/2-minute overtime period, and equipment went flying as the Williamsville girls celebrated.

“My teammates put me in those positions, and I’m happy to be able to finish them,” Roland said. “It has to be the best feeling ever, especially in my senior year.”

Hopkins gave credit where it was due to Kenmore/GI, but he couldn’t say enough about his goalie’s late-game heroics and his Division I-bound captain.

“The girls played a great game,” Hopkins said. “Mia Wendell stood tall once they got that second goal. Emma Roland, I can’t say enough great things about her. The hat trick, including the game-winner in overtime. We were able to make the play at the right time to get the win.”

Hopkins and his team will enjoy this one for a while before they’re back to work to prepare for the state tournament this weekend in Lake Placid.

“Then we’ll focus on trying to bring another state banner back to Western New York.”

What players are not being talked about enough for the NBA Draft?

Nichols defenseman Andrew Bigelow has committed to the powerhouse program at Johns Hopkins in Baltimore.

The Western New York athletes were among those selected in the state based on voting by coaches within each geographical area.

Many of Western New York's best junior and sub-junior golfers are entered in the NYSGA Junior Boys and Girls tournaments starting Tuesday morning.

Glen Graham is serving as a head coach in the Kensington Lions High School Seniors All-Star Classic for the third time during his tenure on the sideline at Cleveland Hill.

Softball honor roll: Meet some of the top players in Western New York

Don't miss our list of some of the top local high school softball players.

The 45th edition of the Kensington Lions All-Star Football Classic will take place at 7 p.m. Wednesday at Williamsville South High School. Here is the roster for the South team.

High school state championships back on calendar for this academic year

Dr. Robert Zayas told the NYSPHSAA Central Committee during its annual meeting in Monticello that the championships in all sports are scheduled

“I just thought that I wanted to go to a school where I can make the biggest change. Howard is going to be completely different than how it is at Orchard Park … being around more people who look like me and not being a minority compared to how it is in Orchard Park.”

Despite the obstacles for coaches, players and fans, these teams persevered to hoist the hardware.

Williamsville players celebrate winning the Section VI title with a 3-2 overtime win over Kenmore/GI in the girls hockey at Cornerstone Arena in Lockport on Feb. 3. (James P. McCoy/Buffalo News)