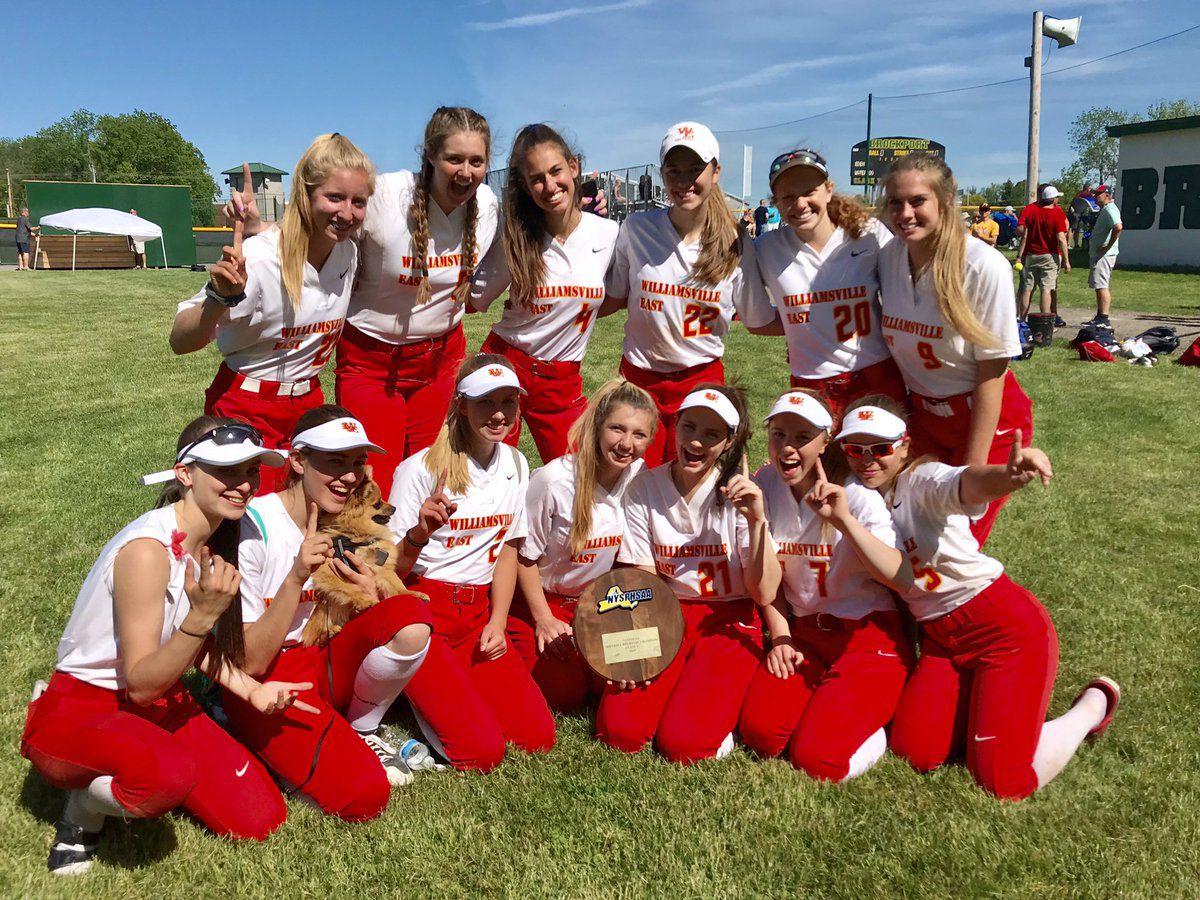 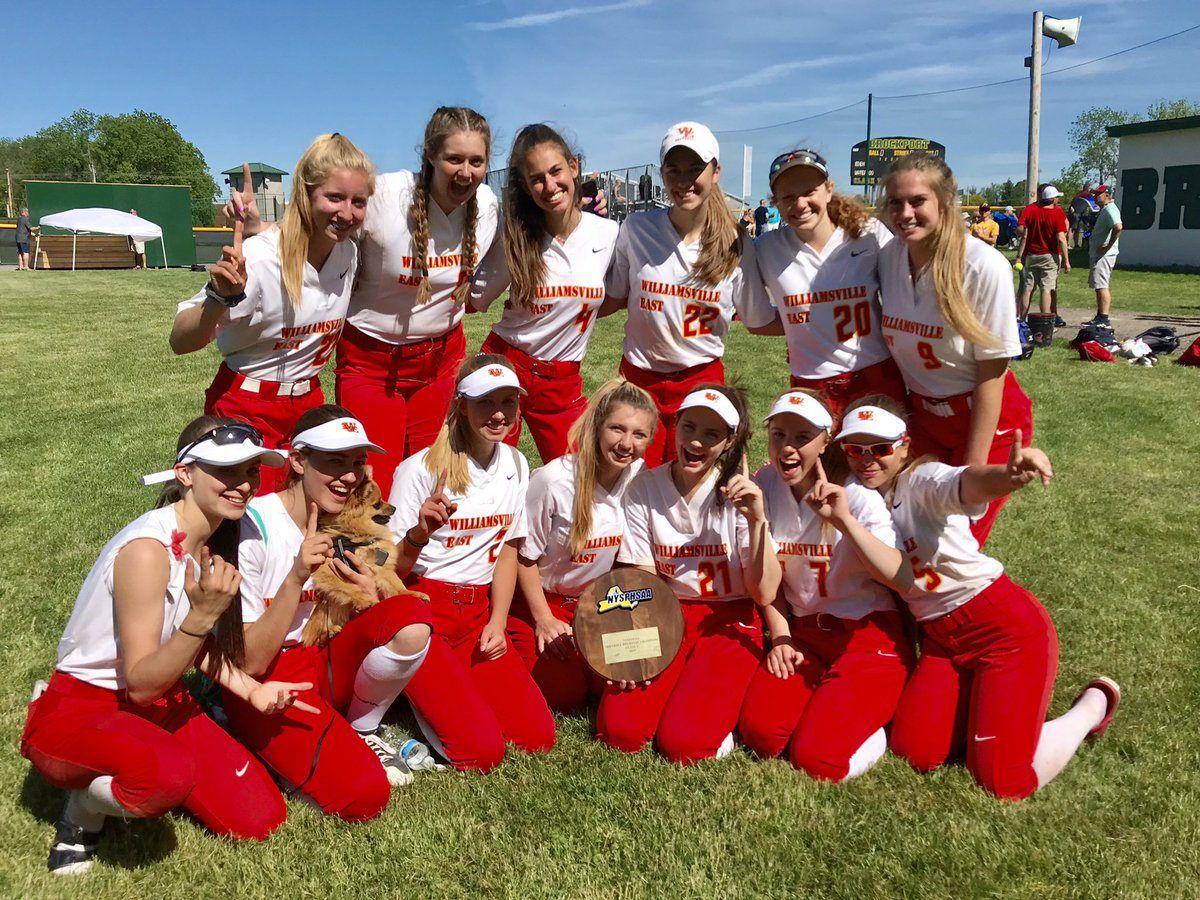 BROCKPORT — Summer Clark made quick work of her opponent, when she was on the mound and at the plate.

Clark, a sophomore pitcher on the Williamsville East softball team, struck out seven batters and allowed two hits in the Flames’ 12-0 win against Honeoye Falls-Lima in the Class A Far West Regional on Saturday the College at Brockport.

“It’s easy for me, because I trust my teammates to make great plays behind me,” said Clark, a left-hand pitcher. “The ump was a little tight (with the strike zone), but you find a way to work around it.”

The Flames (25-0) will face Walter Panas, the Section I champion, in a New York State Public High School Athletic Association Class A state semifinal at 9 a.m. Saturday at Moreau Recreational Park in South Glens Falls. The winner plays for the state title at 1:30 p.m.

Clark went 5-for-5 with a pair of doubles and drove in four runs, and she sparked the Flames’ offense in the early innings.

But it took a while for the rest of the lineup to follow suit. Williamsville East had six hits but grounded into three double plays in the first four innings, until it broke the game open in the fifth by scoring four runs on six hits.

The Flames sent 16 batters to the plate through the fifth and sixth innings, en route to a 9-0 lead into the seventh, and then Rachel Steffan’s two-run homer over the right field fence set the final score.

“There were situations where their players made plays and we were caught off base, and when you hit the ball hard and someone doubles you off, what are you going to do?” said Williamsville East coach Chris Durr, whose team had 20 hits, including 13 in the final three innings.

“It took us a couple innings just to get used to it. We were all over them from the start, but we were hitting it right at them. Second, third time through the order, and they’ve done it all year, these kids start jumping on balls, and that’s what they did."

Victor 3, Orchard Park 1: There were no late-game heroics for Orchard Park. Stymied by the pitching of Victor’s Katie Sidare, the Quakers managed only two hits in the Class AA Far West Regional.

“The pitcher had a good rise ball, and we had to get up on her before it rose, but we didn’t really do that too well,” Quakers third baseman Megan Giese said. “Going up against her was a change we couldn’t get adjusted to."

Orchard Park scored its only run in the top of the first inning, when Jaden Swiatek’s single drove in Sydney Bielicki, who beat the throw home by Victor centerfielder Chloe Whittier.

Victor, the Section V champion and defending Class AA champions, tied the game at 1-1 in the bottom of the third, Chloe Whittier scored on a throwing error.

Kyra Grooms’ line drive got past Swiatek, Orchard Park’s center fielder, and scored Alli Haugh and gave the Blue Devils a 2-1 lead in the bottom of the fifth. The next batter, Erin Wong, hit a double to left field that drove in Grooms, and Giese relieved Quakers starting pitcher Elisabeth Lis.

Giese struck out five of the six batters she faced, but Victor retired six of the final seven batters for Orchard Park — only Ashley Tenevski reached base, when Haugh, Victor’s left fielder, dropped a fly ball in the top of the seventh.

“Lis pitched really good,” Giese said. “We just had some errors that hurt us today.”

Victor will face Cicero-North Syracuse of Section III in a state semifinal at 11:30 a.m. Saturday in South Glens Falls. The winner plays for the state title at 4 p.m.

To be nominated for the team, students must have carried a 90-plus average for the previous six semesters and been a starter or significant player in their winter sport.

Canisius High graduate and Amherst native Blake Haubeil will not kick for Ohio State in Monday night's national championship game after he announced that he had tested positive for Covid-19.