It was a big Saturday at Canisius' Koessler Field, even though coach Kraig Kurzanski didn’t want it to be.

Before and after his team’s non-league game against WNY Maritime/Health Sciences (2-1), the PA announcer made it known it was his first home game with the team, and three hours later, happily congratulated Kurzanski on the Crusaders' 43-30 win.

Kurzanski doesn’t like the attention and certainly could live without the publicity garnered with him returning to his alma mater. Although, for a well-accomplished coach in Western New York like himself, it’s well warranted.

“I don’t know why,” Kurzanski said on the attention of his first game. “I’m not trying to be coy or whatever. I’ve coached in over 250 of these things, so I love it. I guess people think it’s our first game or my first game here, which it is. I don’t look at it like that. I look it as our first home game for our eight sophomores. There’s more than just me. I’m never going to make it about because it’s about the kids. That’s why I keep doing this.”

In a game that almost went three hours without overtime, Canisius (2-1) made each minute count. With 2:59 left in the third quarter, it was leading 36-8 and seemed on its way to a blowout victory. About a minute later, Falcons junior Shamere Banks connected on a 64-yard touchdown with senior Timothy Bryant, trimming the Falcons' deficit to 22 entering the final frame.

The fourth got off to a tough start for WNY Maritime/Health Sciences when the snap was high and carried all the way to its 29-yard line where the ball was recovered by Canisius.

It was a costly mistake, as the Crusaders scored a couple of minutes later with junior Nicholas Penuvchev firing a 25-yard touchdown pass to senior Ricco Brown. Following the extra point, Canisius had a 43-14 lead with 7:38 left. Penuvchev went 15-of-22 passing, had 205 passing yards, and four touchdowns.

“Coming into this week, we knew we could get the job done,” Penuvchev said. “We had a great performance, but from here on out we just have to finish. We had a pretty valiant effort today. All the guys played pretty hard.”

During that period, senior Mike Doctor left the game following a hard tackle and didn’t return. Doctor ended the day with three receptions for 57 yards, and Kurzanski said Doctor was dealing with wrist and rib pain.

In a span of three minutes, WNY Maritime/Health Sciences scored 16 points. First was Banks precisely throwing a 51-yard touchdown to junior Amari Degraffenreid. It was a Degraffenreid type of quarter, as he followed up his touchdown by intercepting junior Vincent Zimmerman for a 60-yard pick-six, Zimmerman's second interception of the game. After the two-point conversion, the Falcons trailed by 13 with 4:30 left in the fourth.

WNY Maritime/Health Sciences had two more opportunities to score, but couldn’t. On their last two plays of the game, Banks was sacked by junior Dyrell Howard-Dolson for an eight-yard loss. With 1:53 remaining, Banks overthrew a pass toward the end zone on fourth-and-22.

“We hung in there,” Kurzanski. “We had enough of a lead to have that kind of buffer. We need to obviously close games out. We’re young and need to learn finish the game out.”

A Canisius coach congratulating the team on their victory and let it known he and the team don’t think they should be ranked No. 6 in large schools.“If the writers is listening, we not done.” pic.twitter.com/IxzxT44HZ7

In Canisius’ postgame huddle, coaches complimented the team’s performance, and an assistant made it known the team feels slighted by being ranked No. 6 in The Buffalo News’ large schools poll.

It was a high-profile win for the Crusaders and Monday morning it’ll be known if they’ll jump from the 6 spot.

The Macks are off to a 3-0 start, thanks to a 44-27 victory over Kenmore West. After the first quarter, the Blue Devils were up 13-0, and went into halftime up 20-6. Kenmore West had the momentum, and McKinley coach Brian Davis wanted his team to reverse course before the game got out of hand.

“I told our defense we need to step up, we weren’t getting any D-line penetration,” Davis said. “Rashawn Riley looked me in the eye and told me at halftime, ‘Coach, I got you. We not going to let you down.’ He’s a senior and he put the team and defense on his back. He went to work.”

The defense did its part, and it was then up to the offense to score. Sophomore Tyrone Hughes did exactly what the team needed, scoring three rushing touchdowns on 227 yards and 16 carries. Through three games, Hughes has 576 rushing yards and is on pace to surpass his 1,057-yard total as a freshman.

“He has been stepping up to the plate,” Davis said. “Going into the season I told him, ‘going into your sophomore you got to try and be better than you were your freshman year.’ He wants to be the best running back to ever come out of McKinley and I’m challenging him to be better.”

“We definitely faced adversity last night,” Davis said. “I’m just extremely proud of these kids fighting through the adversity. In the second-half they kind of took it to them.”

Orchard Park’s offense with Ben Gocella is different. The senior led Section VI a season ago in passing attempts with 308, and through games three games he has 74 attempts. Last season, he had 109 attempts through the same number of games.

Gocella has noticed the offense having to rely less on his arm and sees it as a good thing for the team long-term.

“It definitely makes things a lot easier,” Gocella said. “When our run game is good it opens up the pass plays and makes my reads easier with more open receivers.”

With the way he’s started the season with 39 carries for 351 yards and six touchdowns, it’s hard to fathom he was a junior varsity player a year ago. Against Sweet Home, Jamestown and Clarence he’s had at least 110 rushing yards per game.

Through three games, Gocella has a 60.8% completion rate and is averaging 10.3 yards per attempt.

A season for the Hillbillies has also led to a new starting quarterback. Enter senior Ethan Fry, who spent last season at wide receiver. The team always had confidence in his throwing abilities and knew this would be the season for him to start.

Over the offseason, he practiced multiple times a week and did many 7-on-7 camps.

“It’s hard, especially on offense,” coach Greg Sherlock said. “He was thrown right into the fire this past summer.”

Despite Fry having a completion percentage of 67.7%, Sherlock believes his quarterback can continue to grow. Fry’s 90 passing attempts are second in Section VI.

“He’s put a ton of time in,” Sherlock said. “Does he still make mistakes? Absolutely. He’s getting better each and every week. That can be a scary thing because he’s very athletic.”

In South Park’s 56-24 win over Kenmore East, Sparks junior captain Noah Willoughby went 19-of-33 passing for 406 yards, six touchdowns, and an interception. Through three games, Willoughby is completing 61.6% of his passes and is averaging 11.2 passing yards per attempt.

“Noah’s one of the top kids in the area,” coach Tim Delaney said as his team improved to 2-1. “We have a really good crew of skill kids to give the ball to. He’s done a really good job of spreading it around and that makes it difficult to defend us.”

Willoughby had a busy offseason by living in the weight room, communicating with his coaches, and having a will to improve. He already holds multiple school records and is looking to make more leaps.

“He’s exceeding our expectations this early,” Delaney said. “We need to continue that and he knows he needs to grow and get better on a week-to-week basis. Offensively we’re going through what he’s able to do.”

Five of Willoughby’s completions were to senior Nani Rivera, and he finished the evening with 113 yards for a touchdown. Senior AJ Watts had four receptions for 112 yards and two touchdowns.

“Those guys are all dangerous in their own way,” Delaney said.

Born and raised in Boston, MA. My experience includes The Boston Globe, The Arizona Republic, The Athletic, The Tennessean, Bleacher Report and NBC Sports Northwest. Open to suggestions and connections: Cmurray@buffnews.com

Lancaster moves to No. 1 amid shuffle in News large schools football poll

Large schools are those in Classes AA and A along with Canisius, St. Joseph Collegiate Institute and St. Francis.

Small schools are those in Classes B, C and D along with St. Mary's, Cardinal O'Hara and Bishop Timon.

The Connolly Cup and Trench Trophy have announced their award winners for Week 3 of the high school football season. 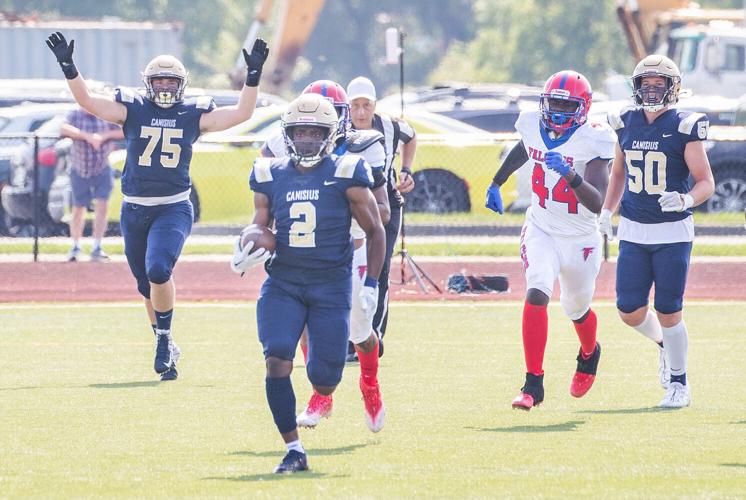 Canisius offensive lineman Colin Smith cheers as running back Nyzell Lash goes for a big run with the ball near WNY Maritime/Health Sciences defenders during a football game at Stransky Athletic Complex on Sept. 17, 2022. 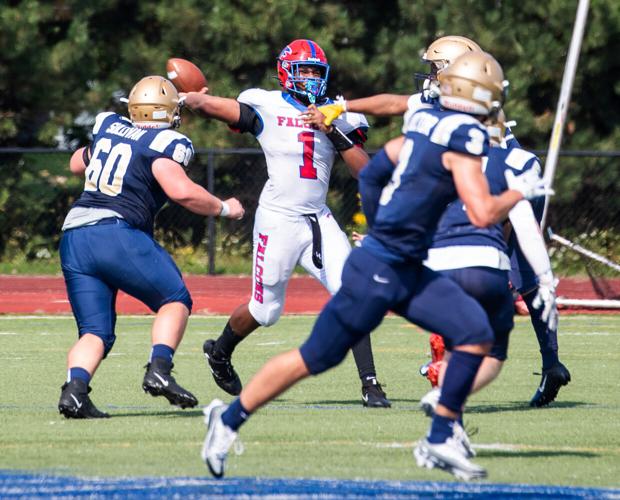 WNY Maritime/Health Sciences quarterback Montrice Webster prepares to throw the ball between Canisius defenders during a football game against at Stransky Athletic Complex on Sept. 17, 2022.