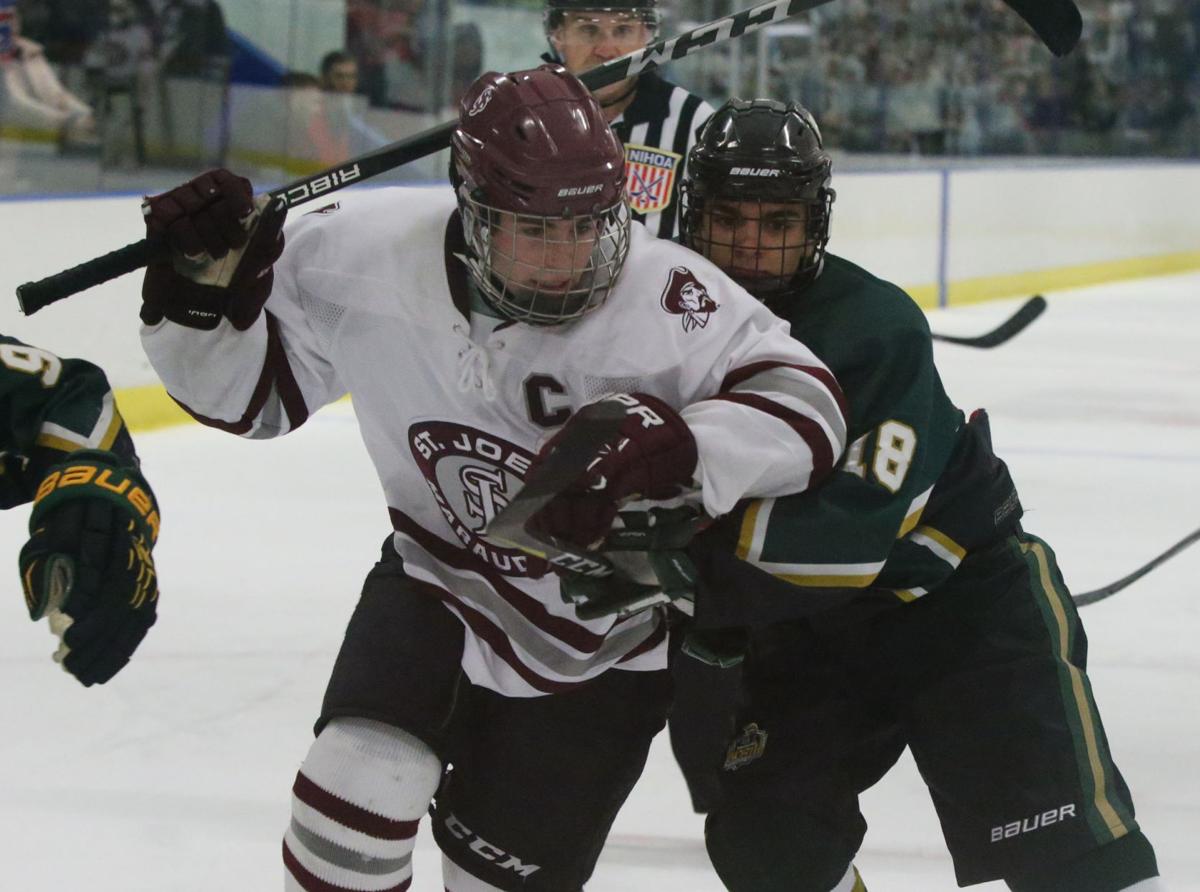 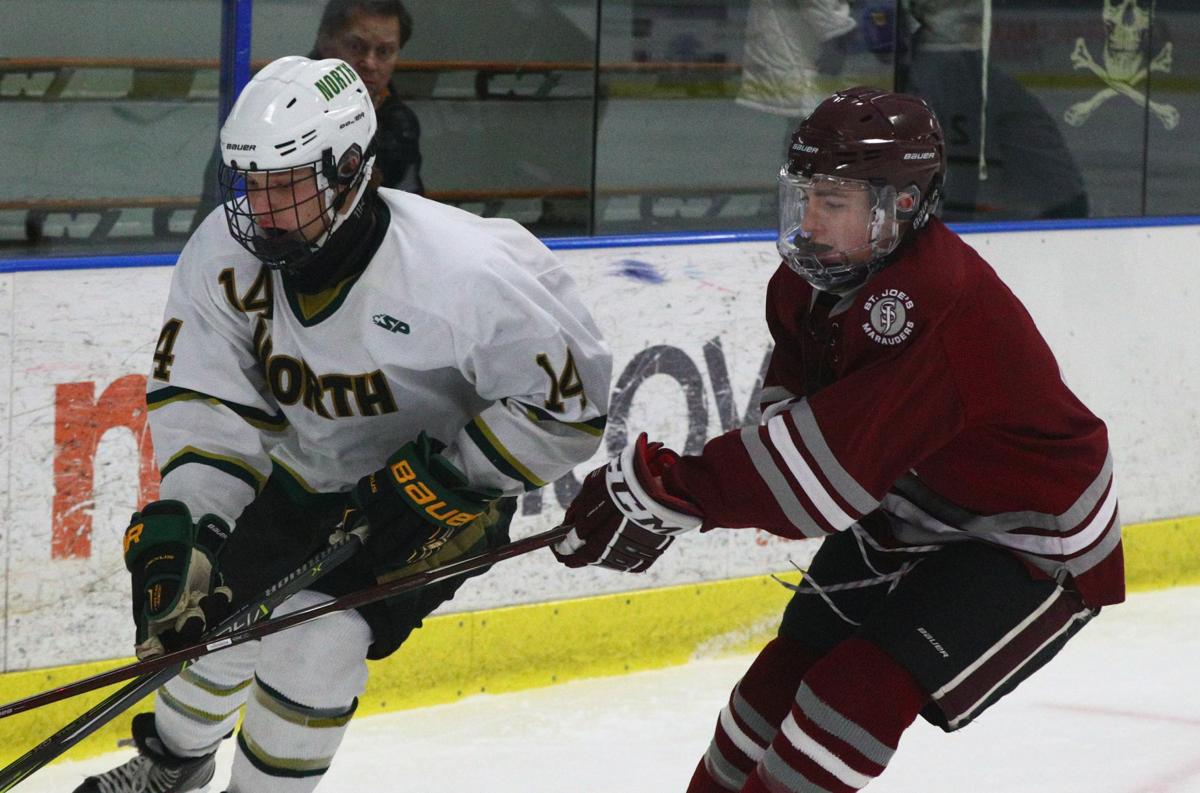 The one word answer: Injuries.

The Marauders have played one entire game with their full roster, as they've had eight players miss at least one game with an ailment.

The big ones have been to the Marauders' top defensemen. Senior Shane Scheeler has been out since having tendons and an artery severed by a skate in a Dec. 2 game. Meanwhile, fellow top-pair defenseman C.J. Goss, the grandson of legendary St. Joe's athletic director and Greater Buffalo Sports Hall of Fame member Joe Wolf, has been battling an undisclosed injury. He's back after missing six games, logging lots of ice time. Both are solid skaters and puck handlers. Puck-handling defensemen make it easier to break out and go on the attack.

Still, the cupboard isn't completely bare for the two-time-defending state Catholic champion Marauders (10-5-2). A key returnee is Spencer Frome, a high-energy player who helped the school's soccer team win the Monsignor Martin championship in the fall. David Matthew also returns. He leads the team in scoring, and coach Rich Crozier said he's the fastest player in the league.

Ben Weppner has received the bulk of the action in goal for St. Joe's, but senior Daniel Mikolajczak is back after playing full-season travel last year and is also a solid option. He was a member of St. Joe's state championship team two years ago.

"We've faced more adversity this year than possibly in the previous nine years as a coaching staff (here)," Crozier said. "That being said, I'm very confident in our ability to overcome the adversity that we've faced and hopefully have an opportunity to defend the title again this year."

St. Joe's should be the No. 2 seed for the Federation's Monsignor Martin postseason – the Niagara Cup Playoffs. The top three teams receive a bye into the semifinals.

Canisius, the Marauders' biggest rival, earned the No. 1 seed for the postseason via the criteria used by the Fed to seed the Catholic Schools for their playoff tournament.

The Crusaders (9-6-2-1), who have a blend of youth and experience, are on quite the roll in their last eight games with wins in all but one of them – last Saturday's 4-4 tie against Williamsville North.

"Things are coming together," Canisius coach Sam Belsito said. "The guys are playing with confidence. Confidence is a big thing."

Canisius last won the Niagara Cup in 2015, when it stunned top-seeded St. Joe's in the final, en route to capturing the state Catholic championship.

As of last week, St. Francis was ranked fourth in the state in Division II with a 10-2-3 mark under coach Tim Benner.

What's been the key to the Red Raiders' success?

"The kids are just working hard," Benner said. "They believe in each other and work for each other. I'm really impressed with their character. … Guys are embracing whether it's being a scorer or grinder just get pucks deep kind of guy and it's helping with the overall success."

Senior captain Erik Pawelski and classmate John Kubiak have shined for the Red Raiders, along with junior Cullen Roll and sophomore Jack Kernitz. Goalies Vincent Vaccaro and Rocco Arnold have been playing exceptionally well. "We can play either of those guys in net and they can win us games," Benner said.

St. Mary's is 9-4 and starting to get into the swing of things, according to coach Mark Dantonio, in its return season to the Federation after winning the Club League's Small School title last year.

"We're starting to play like we did last year," Dantonio said. "From the back to the front, we're looking pretty good right now."

St. Mary's held Lockport to three shots in a win over the weekend and followed that with a 4-0 win over Amherst last Monday.

Bishop Timon-St. Jude may be young but can never be counted out. Gavin Farrell is the top scorer for the Tigers (6-6-2), and just one of four seniors on the team. Another senior, Matt Pilski, anchors the defense along with junior Fergus Gould.

Check out The News' list of the top high school bowlers throughout Western New York.

What frustrates wrestlers, their coaches and families is that  they don't understand how their sport could be considered more risky than football, basketball and ice hockey.

Here is the All-Western New York girls basketball second team as selected by The Buffalo News with input from area coaches and talent evaluators.

Section VI will have spring wrestling season, but not for Erie County schools

"The expectations are clear from our school leaders. Our school leaders cannot take on the liability associated with splitting off from the ECDOH's recommendations," Section VI president Brett Banker said.

Here is the voting for this week's Buffalo News large schools football poll.

Five girls from five different schools make up the team.