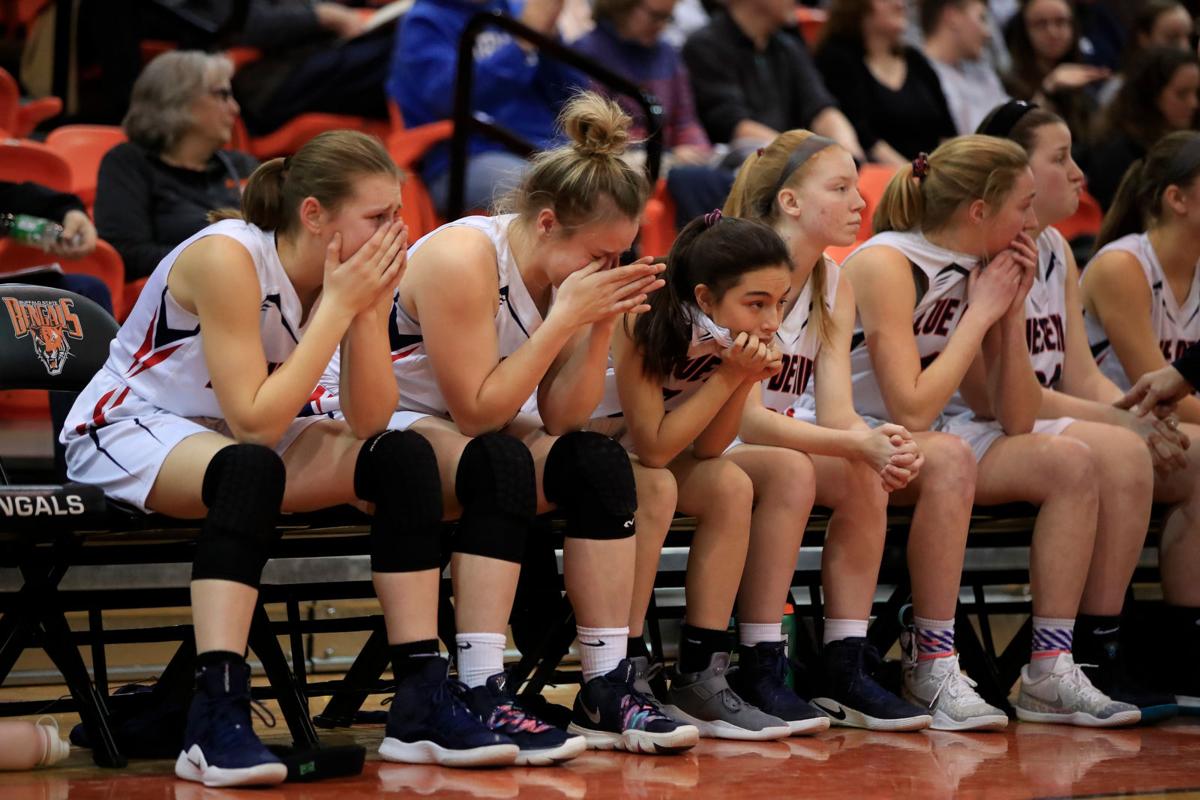 East Aurora players sit on the bench during the closing seconds of a loss to Midlakes during the second half of the Far West Regional Class B Championship on Saturday, March 9, 2019, at the Buffalo State Sports Arena. (Harry Scull Jr./Buffalo News) 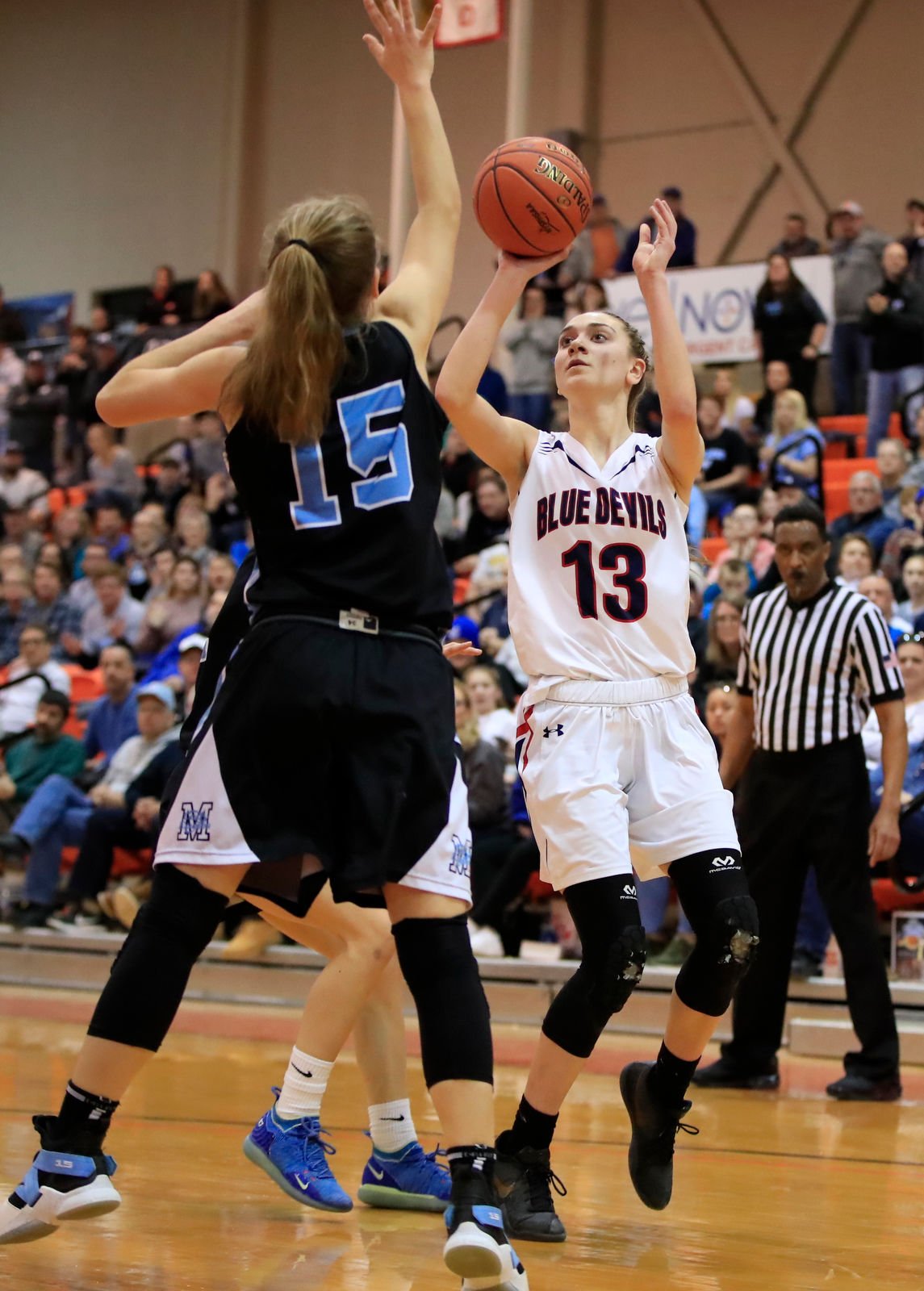 East Aurora forward Sarah Tully shoots against Midlakes during the second half of the Far West Regional Class B Championship at the Buffalo State Sports Arena on Saturday, March 9, 2019. (Harry Scull Jr./Buffalo News)

East Aurora couldn’t have asked for a better start to the Class B Far West Regional. The Blue Devils' girls basketball team raced out to a 14-2 lead and held an 11-point advantage at the end of the first half.

But defending regional champion Midlakes does its best work in the second half. On this day, the Screaming Eagles also showed they were an overtime team.

Midlakes (22-3), which came from eight points down at half in the Section V final against Batavia, will return to the state Final Four after rallying for a 57-51 win over East Aurora on Saturday at SUNY Buffalo State.

Midlakes senior captain Alaina Forbes scored 15 of her game-high 21 points in the second half to help lead Eagles' high-tempo offense in the comeback effort. She knocked down two free throws with 38 seconds left in regulation to send it to overtime tied at 46. In overtime, Midlakes held the Blue Devils to just five points.

“It was a tough loss, but I think we lost to a really good team,” East Aurora coach Gary Schutrum said. “They were a Final Four team last year with four girls returning. They certainly have the jets to get up and down the court, and no lead is safe against them. They just keep coming with a great ability to finish.”

East Aurora senior Sarah Tully led the Blue Devils with 17 points but was held to six in the second half. Junior guard Katie Oar fouled out early in overtime, and Schutrum said he was starting to run out of bodies in the backcourt.

“I think you have to score against them, because if you don’t, they’re coming down the court so darn fast,” he said. “We tried some different things but it’s tough when you’re not used to playing against kids getting down the court like that.”

Midlakes’ explosive offense was aided by senior Macy Kisner, who scored 15 points, and classmate Sydney Passalacqua, who had 11 points, including five in overtime.

East Aurora (21-4) moved the ball well in the first half and was able to finish some easy shots, so Midlakes coach Nate Rich said his team moved into a zone.

“I didn’t feel good about how we played defense in the first half, and I thought East Aurora executed their offense very well,” Rich said. “I think our zone defense gave them some problems in the second half and they didn’t get as many clean looks.”

Forbes said her team was out of sorts to start the contest and, at one point, players didn’t know who they were guarding for about five possessions.

“We’ve been a second-half team basically the entire year and we picked up our defense and communicated more,” she said. “We knew if we wanted to win, we had to do what we had to do to get it done.”

Midlakes took its first lead of the game, 39-38, with 5:29 left in the fourth quarter on a 3-pointer from Forbes, who followed with a jumper to stretch the lead to three.

East Aurora went on an 8-0 run, highlighted by two baskets from Kennedy Horning (10 points) to regain the lead, 46-41, but the Blue Devils were held scoreless for the final 1:27 of regulation. Meanwhile, Midlakes sophomore Cara Walker converted a three-point play, followed by four points from Forbes, before overtime.

“I felt really good by the time we got it to overtime,” Rich said.

Here's what happened on a big day of high school basketball

Myslinski is now teaching the ways of the sport to impressionable young minds – including his daughter.

LaDuca retired the final two batters, stranding the game-tying run at second base in the process, as the Crusaders earned a 14-13 victory over the Marauders on Tuesday night at Canisius College’s Demske Sports Complex.

Weiser, 28, is the University at Buffalo’s all-time leader in catches for tight ends and was a first-team All Mid-American Conference selection during his time with the Bulls.

Here's the best players in the region selected by Western New York coaches.

The Canisius High rowing team will have an opportunity to bring home two championships at the USRowing Youth National Championship Regatta in Sarasota, Fla.

The Valparaiso-bound Delisanti bested a field of 62 golfers on a challenging golf course that yielded just four rounds under 80 in the initial 18 holes of play.

History made by female wrestlers in All-Catholic matches

Ashley Burns of St. Mary’s made history at the All-Catholic meet on Sunday when she became the first female champion in the 55-year history of the event.

East Aurora players sit on the bench during the closing seconds of a loss to Midlakes during the second half of the Far West Regional Class B Championship on Saturday, March 9, 2019, at the Buffalo State Sports Arena. (Harry Scull Jr./Buffalo News)

East Aurora forward Sarah Tully shoots against Midlakes during the second half of the Far West Regional Class B Championship at the Buffalo State Sports Arena on Saturday, March 9, 2019. (Harry Scull Jr./Buffalo News)