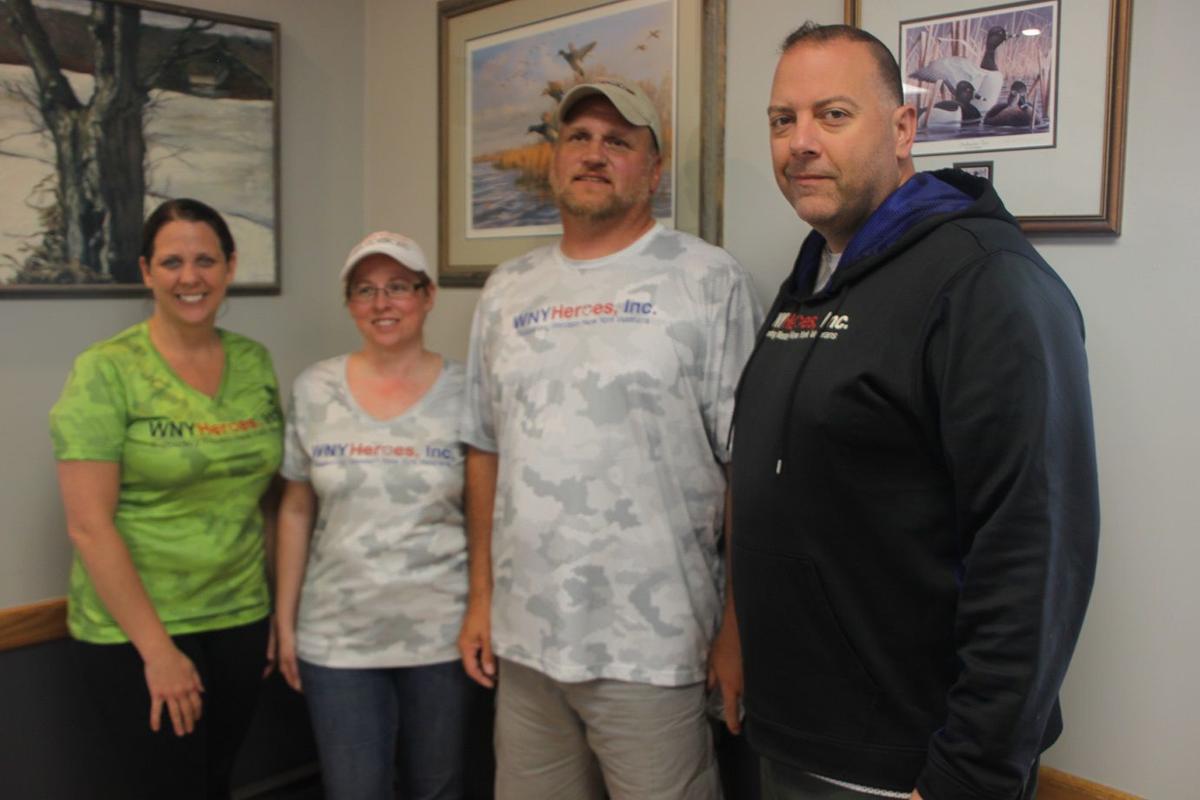 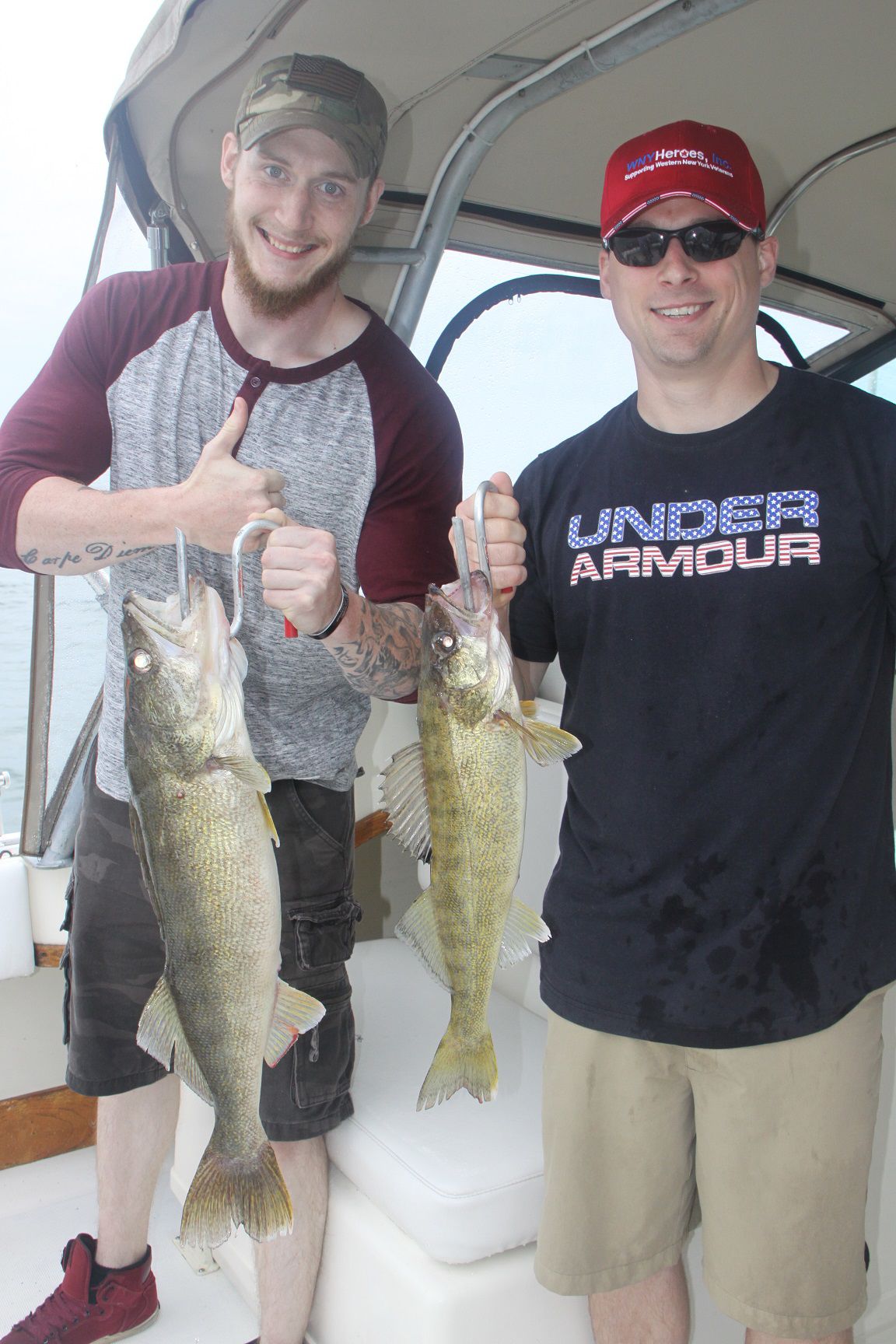 A.J. Fiscus of Batavia and Dennis McCarthy of North Tonawanda after a double-header. They were fishing with Capt. Jim Steel. 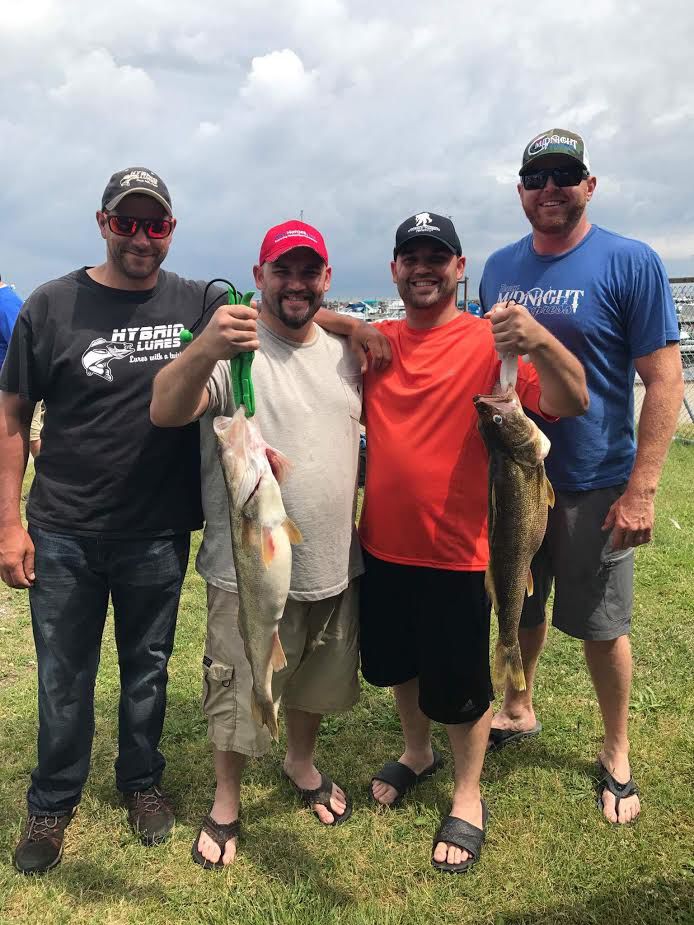 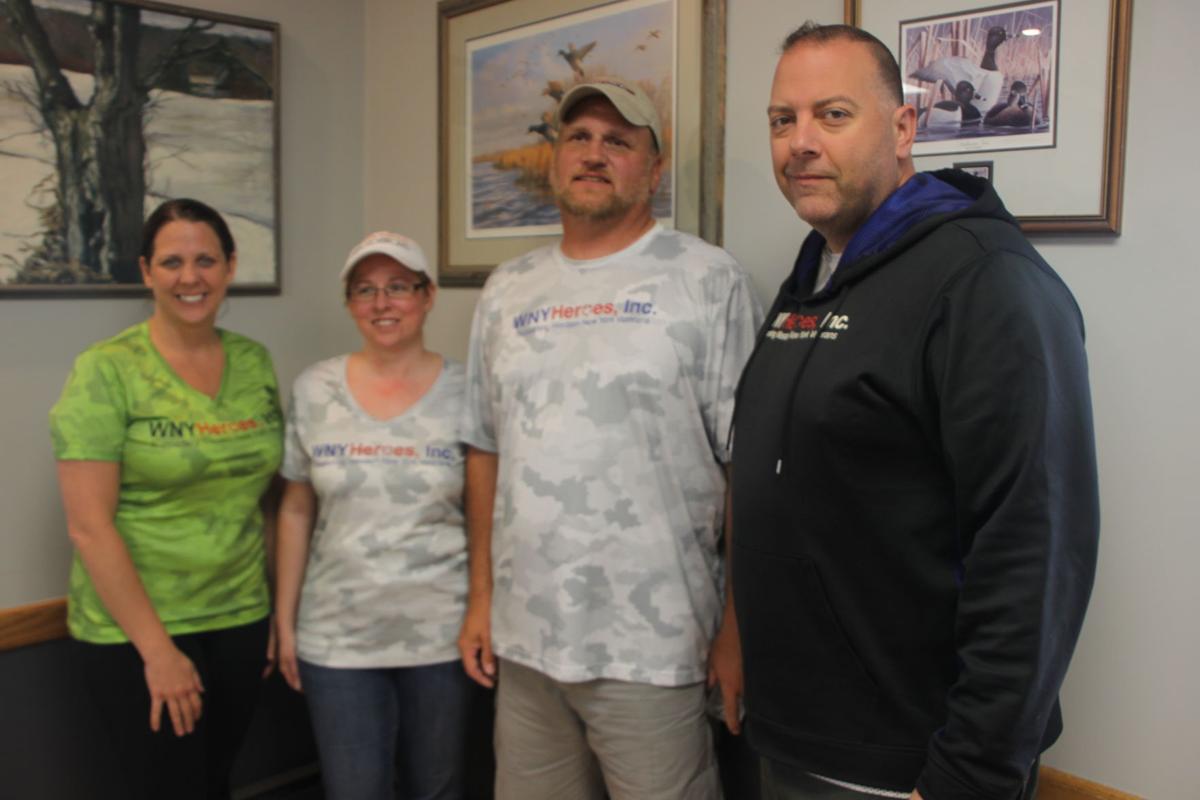 The popular pastime of fishing is enjoyed by millions and millions of people across the country; millions and millions more around the world. It’s an art form, a communications tool and a recreational outdoor activity all rolled up into one. It’s also a perfect mechanism for people to connect. Last week, an inaugural event took place in Dunkirk that combined Western New York (WNY) Heroes, a unique group supporting WNY veterans, with a dozen area charter captains.

“It’s a way to take people from all walks of life and put them on common ground,” said Capt. Jim Steel of Innovative Outdoors and skipper for Dream Catcher Sportfishing. “I’d been involved with other veteran-type outings but my wife Diane and I wanted to help put one together out of Dunkirk. It was a chance meeting between my wife and Lynn Magistrale, Program Coordinator of “Operation BOOTS” with the WNY Heroes group. The two went to Lancaster High School together. They rekindled their friendship at the WNY Outdoor Adventure Expo in Hamburg last March and the end result was the formation of this fishing event. It all just came together pretty quickly.” Maybe there are no coincidences.

As the group gathered at Chadwick Bay Marina, the sky looked ominous. Many wondered whether or not the fishing outing would take place. As they checked radar weather reports, they finally made the decision to shove off and do some walleye fishing. A total of 36 veterans were signed up to fish from 7 a.m. to 1 p.m. Plans were for a friendly one-fish-per-vet competition for big fish with lunch to take place at the Northern Chautauqua Conservation Club at 2 p.m. It didn’t quite work out that way.

The guests of honor on Steel’s 31-foot Tiara, aptly named for this event “Dream Catcher,” were A.J. Fiscus of Batavia and Dennis McCarthy of North Tonawanda. Also on board lending a hand were two of Steel’s fishing team, Jeff Whipple of Varysburg and Rich Fliss of Orangeville. We can’t count Todd Allen of West Seneca because he remained below in the cabin for a majority of the trip, one of the fishing casualties.

Both Fiscus and McCarthy had never fished Lake Erie before and this was an experience that they had looked forward to. Fiscus was familiar with WNY Heroes because the group helped him obtain his service dog. He was the first one on the rod as we worked the waters off Dunkirk with stickbaits behind lead core line. Five minutes later, A.J. had his first walleye on a custom-painted Bagley Rumble B in Mixed Veggie pattern. Dennis was next with another ‘eye and they alternated back and forth for the morning until it was time to return to port. Biggest fish for the morning on the “Dream Catcher” boat was a 6.5 pound fish reeled in my Fiscus. Biggest for McCarthy was a 5 pounder caught on a Challenger stickbait in purple and pink. The two vets had a blast, sharing laughs and a bumpy sea that slowly flattened out as the morning went on.

With lulls in the action, Fiscus and McCarthy slowly opened up to each other, talking about experiences and their deployments to the Middle East. They were sharing a fishing adventure, using it as a tool to communicate with fellow veterans.

Within a couple of hours, a few boats needed to return back to port with some seasick passengers. One of them was Magistrale. “It was a little embarrassing because I was actually in the Navy when I served,” she said at lunch, which had been moved up to noon due to some quick work by the volunteers with WNY Heroes, the NCCC group and the Eastern Lake Erie Charter Boat Association. “BOOTS is a program I started up this year that stands for Battle-Buddies On Our Troops Sides. We serve 12 veterans a month with a dependent or caregiver and, depending on the event and the cost, we can add more veterans to the event if we haven't reached our budget level.  With the community behind us we are usually able to bring in more veterans and a dependent or caregiver.” This time around 28 veterans actually went fishing on Lake Erie.

For the friendly big fish contest, it was Jacob Puff winning the contest with a 6.67 pound walleye he caught while fishing with Capt. Craig Sleeman of Victor with Team Midnight Express. Steven Puff had a fish that was 6.49 pounds. Second place was Fred Bessell with a 6.58 pound walleye. Some nice gift baskets went to the winners. In reality, everyone was winners who participated – one of those proverbial win-win situations … even for the people that felt a little queasy upon returning to solid ground.

WNY Heroes was the brainchild of Chris Kreiger of Buffalo, starting it up in 2007 after he encountered financial struggles personally after returning from Iraq in 2004. Kreiger battled back from physical injuries sustained in the Middle East. While he did, he lost everything he had due to delays in the system for getting disability payments. “Our main mission is to offer financial assistance to the men and women of the military right here in Western New York so that they don’t have to go through what I did,” said the decorated Kreiger. “One hundred percent of everything we do is devoted to veterans in WNY. And everything we raise in the way of funding comes from private donations. We receive zero funding from governmental subsidies.”

“The military is a marriage that stronger than marriage,” insists Kreiger. “When you are in the service, you are willing to give your life for your fellow soldiers. When you get out, you don’t have that same sense any more, that feeling of togetherness. That’s what we are all about, getting veterans together to open their eyes. They can see that they are not alone, that there are others out there that are going through the same thing.”

Hats off to the people who pulled this all together, using fishing as a common communications platform. And many thanks to the charter captains who made it happen on the water, volunteering their time for a good cause.  For more information on WNY Heroes, log on to www.wnyheroes.org. They are located at 8205 Main St., Williamsville at Suite 1. Call 630-5020 for more information.

A.J. Fiscus of Batavia and Dennis McCarthy of North Tonawanda after a double-header. They were fishing with Capt. Jim Steel.