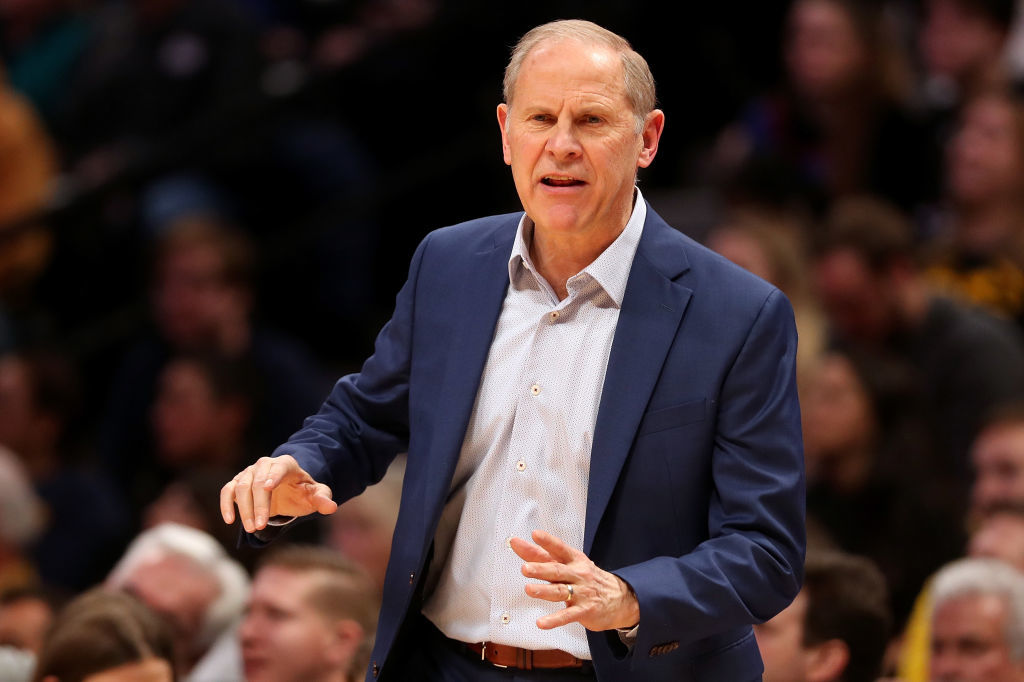 John Beilein's 40 losses this year in Cleveland equals the number he had in the last four years combined at the University of Michigan (Getty Images). 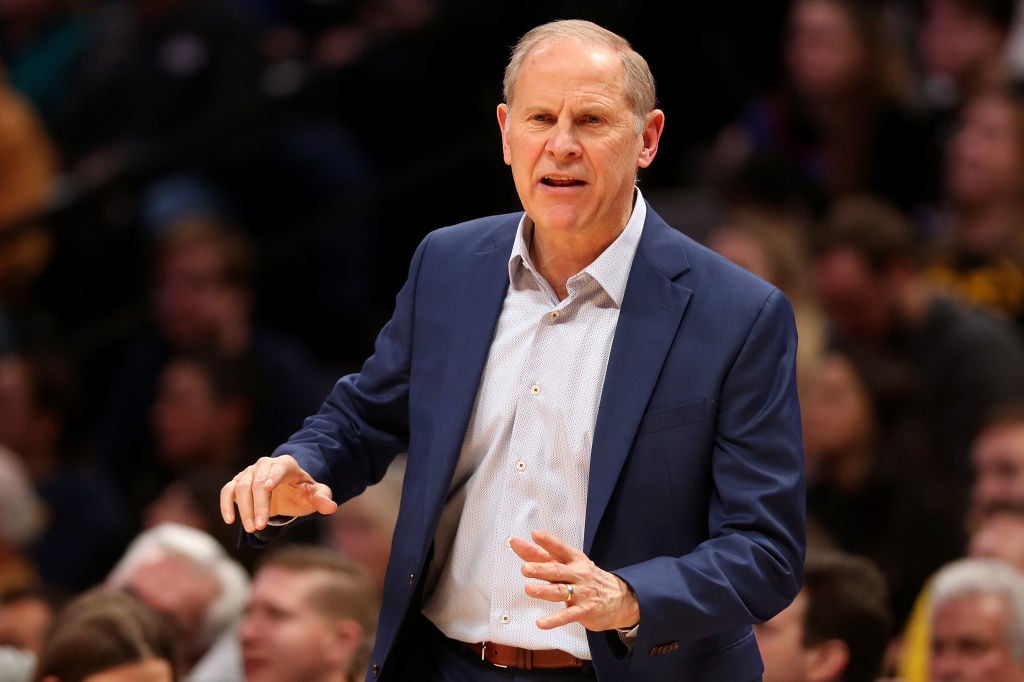 DENVER, COLORADO - JANUARY 11: Head coach John Beilein of the Cleveland Cavaliers works the sidelines against the Denver Nuggets in the second quarter at the Pepsi Center on January 11, 2020 in Denver, Colorado. NOTE TO USER: User expressly acknowledges and agrees that, by downloading and or using this photograph, User is consenting to the terms and conditions of the Getty Images License Agreement. (Photo by Matthew Stockman/Getty Images)

CLEVELAND – John Beilein has spent his whole life as an educator. All the way back to when he took that first big job in his hometown as a history teacher at Newfane High School in 1975. That's where his lifetime of coaching began, too.

But it's safe to say he’s never endured an education like this.

Beilein turned 67 last Wednesday and instead of getting his AARP discounts, he's taking his lumps as a rookie head coach in the NBA. Lots of them. The Cleveland Cavaliers are 13-40, last in the Eastern Conference and ahead of only the injury-riddled Golden State Warriors in the NBA.

In his final four seasons at Michigan, how many games did Beilein lose combined? Exactly 40. (And he won 112!)

A difficult season took an upturn at the trade deadline Thursday, when the Cavaliers pulled off an ultra-surprise move by acquiring Detroit center Andre Drummond – the league's leader in double-doubles – and not selling off key parts.

"This is a first for me certainly," Beilein said of maneuvering at the deadline and adding a top player. "I've had guys injured during the season and all of a sudden a guy who comes off an injury and you try to play him. But in the last two days we tried to assimilate as much as we can and get Andre Drummond into how we want to play going forward."

Reality quickly set back in Sunday. The Cavs will need time to integrate Drummond into a team that was largely perimeter-based and didn't have much of an inside game.

They lost to the Los Angeles Clippers, 133-92, the worst home loss in the franchise's 50-year history. Beilein was ashen-faced after the pounding in Rocket Mortgage Fieldhouse.

"The Clippers were really good today and we weren't," he said glumly. "We have to do more when we have the ball. We stood around a lot. We have to have some action when the ball goes in. ... We're having a lot of trouble stopping people and today we had trouble scoring points, which has not been a big deal."

The Cavaliers have been scorched for 125 points or more in 13 games this season. The yield has eclipsed 130 seven times. There was a 143-101 loss in Dallas, a 141-94 drubbing in Philadelphia, back-to-back losses in Los Angeles to the Lakers (128-99) and Clippers (128-103). Most disappointing was a 131-112 home loss to Golden State – and remember neither team looks anything like the ones the NBA saw over the last five years.

"We're playing a team that can win the NBA championship," Beilein said before the game against the Clippers. "We've had several of those this year. We haven't won any of them."

The Cavs have lost 12 in a row at home and 12 of their last 13 overall. They only have two wins against teams with winning records (Indiana and Denver). They were 2-16 in one stretch earlier this year that featured an 0-11 mark against Toronto, Milwaukee, Boston, Philadelphia, Miami, Dallas and Houston.

They fit that classic basketball cliche of playing Swiss cheese defense. As in full of holes. It's easy to see why.

Kevin Love and Tristan Thompson remain from the championship days, but LeBron James and Kyrie Irving are gone. Guards Collin Sexton, Darius Garland and Kevin Porter Jr. all have huge potential but are all 21 and under – still college kids – playing a man's game. Drummond will help. But this is a major work in progress.

"Tonight was pretty ugly," Love said of Drummond's debut. "So just show 'em your worst first, and we can go up from there."

Questions exist about whether Beilein can handle the transition from college to pro. Stories were written earlier in the season with anonymous sources saying players were complaining about the length of practice and video sessions. Things move fast in the social media world and a mini-firestorm started last month when Beilein apologized to his team after it leaked out he referred to them as a "bunch of thugs" in one video session when he said he meant to say "slugs."

A quick chat in Toronto before Christmas had Beilein noting how he often does three press conferences on gamedays: One after the morning shootaround, one around 90 minutes before tipoff and the customary one after the game. He seemed frazzled then and even moreso now.

Altman hired Beilein in May after the Cavaliers went 19-63 last season under Tyronn Lue and Larry Drew.

“John was tasked to ... develop a culture and develop our young guys and put them in a position to be successful,” Altman said. “What’s been hard for Coach is obviously he’s had so much success. But he understands the process and what we’ve asked him to do is exactly what he’s doing: Set these guys up for success, get them reps, put them in meaningful possessions at the end of the games and let them fail. They have to play through some of these mistakes to get better.”

Drummond followed Beilein's Michigan teams closely while playing in Detroit and was thrilled to learn of the trade, and not just because the Cavs likely have no problem picking up his $28.7 million player option for next season.

"He didn't recruit me in college so I made fun of him all the time for that," said a laughing Drummond, who went to Connecticut instead. "Definitely have a good relationship with Coach Beilein. Watched him when he was at school. He's a helluva coach. Obviously it's his first couple of months here. It's going to take time to get adjusted. He still needs to learn the game. It's a big adjustment going from college to the NBA and once he really learns the game, I think he'll do great."

Still, there are nights like Sunday when the Cavs look completely discombobulated. Garland committed a turnover 15 seconds into the game that the Clippers converted. Love clanked a three-pointer that turned into a Paul George jumper and Drummond missed his first two shots.

Ivica Zubac made it 6-0 after 80 seconds and the Cavs gave up 15 points in the first 4½ minutes. They trailed by double digits in less than six minutes. They were down, 36-21, after the first quarter and trailed, 73-50, at halftime.

You get the picture.

Beilein is a basketball junkie and a lifer in the sport. Nothing makes him happier than being on the court. That was one of the greatest attractions to this job in the first place, a lifestyle that placed no limits on coaching time and allowed for some down time in the summer instead of the 24/7 pace of recruiting.

There are tradeoffs during the season, however. Beilein would routinely have 125 practices a year at Michigan. He's going to be lucky to have a third of that in the NBA.

"You have to make the best use of your time," Beilein said that December night in Toronto, before a 133-113 drubbing at the hands of the defending NBA champion Raptors. "Between travel, back-to-backs, three in four (games in nights), you just don't have a lot of it at this level."

The Cavs have to hope the pattern of Beilein's career continues. His first game as a Division I coach was at Canisius in 1992 – and he lost at Duke, 110-52. By 1996, they were enjoying the school's only NCAA Tournament bid in the the last 63 years. His first West Virginia team in 2002-03 went 14-15. Before he became the all-time leader for victories and went to the national championship game twice at Michigan, his first team there in 2007-08 went 10-22.

Still, these are Beilein's hardest lessons yet.

"I’m pretty happy with what our coaching staff has done this year,” Altman said. “I’m pretty sure they think we should have a few more wins, and that’s fine. But to me our success is on the younger kids and how they’re growing up, not only as basketball players, on and off the floor as men and creating really, really good positive habits every day. Our staff has done a wonderful job with that.”

Look for the under when it comes to Giannis's points prop

In the pandemic world of 2020, easily the biggest story I followed all summer was the sudden arrival of Major League Baseball in Buffalo for t…

The year in sports: The pandemic caused a pause and then the games returned

The first thing we'll remember about 2020 in sports is the silence. From mid-March until July, the games were stopped because of Covid-19.

John Beilein's 40 losses this year in Cleveland equals the number he had in the last four years combined at the University of Michigan (Getty Images).

DENVER, COLORADO - JANUARY 11: Head coach John Beilein of the Cleveland Cavaliers works the sidelines against the Denver Nuggets in the second quarter at the Pepsi Center on January 11, 2020 in Denver, Colorado. NOTE TO USER: User expressly acknowledges and agrees that, by downloading and or using this photograph, User is consenting to the terms and conditions of the Getty Images License Agreement. (Photo by Matthew Stockman/Getty Images)