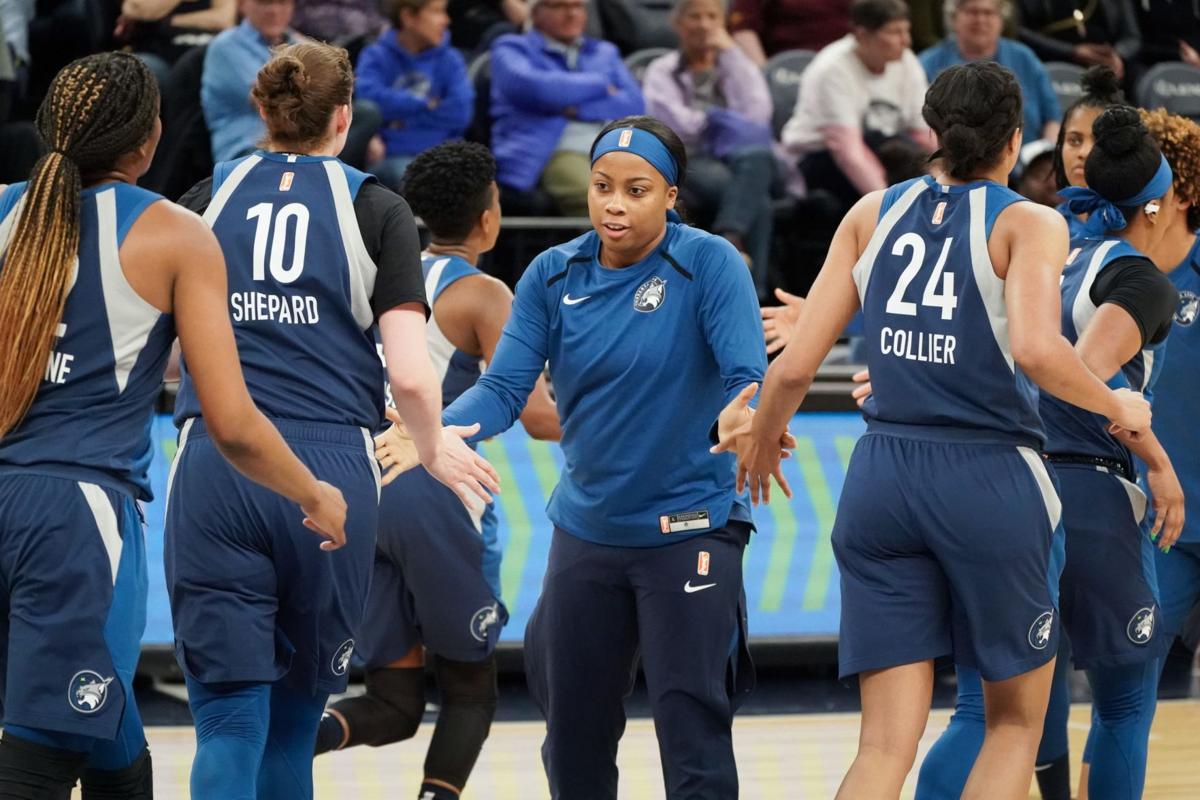 Cierra Dillard cheered for the Minnesota Lynx from the bench during a preseason game Friday night. (Glen Stubbe/Special to the News) 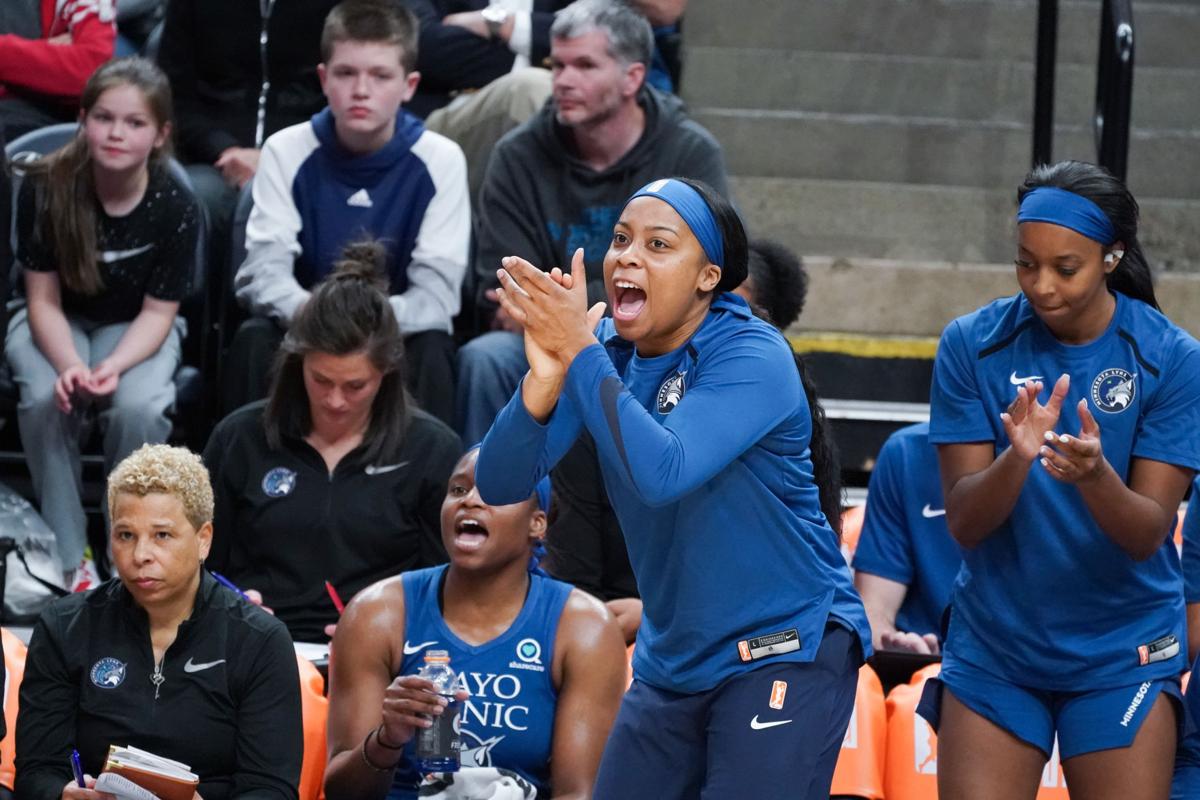 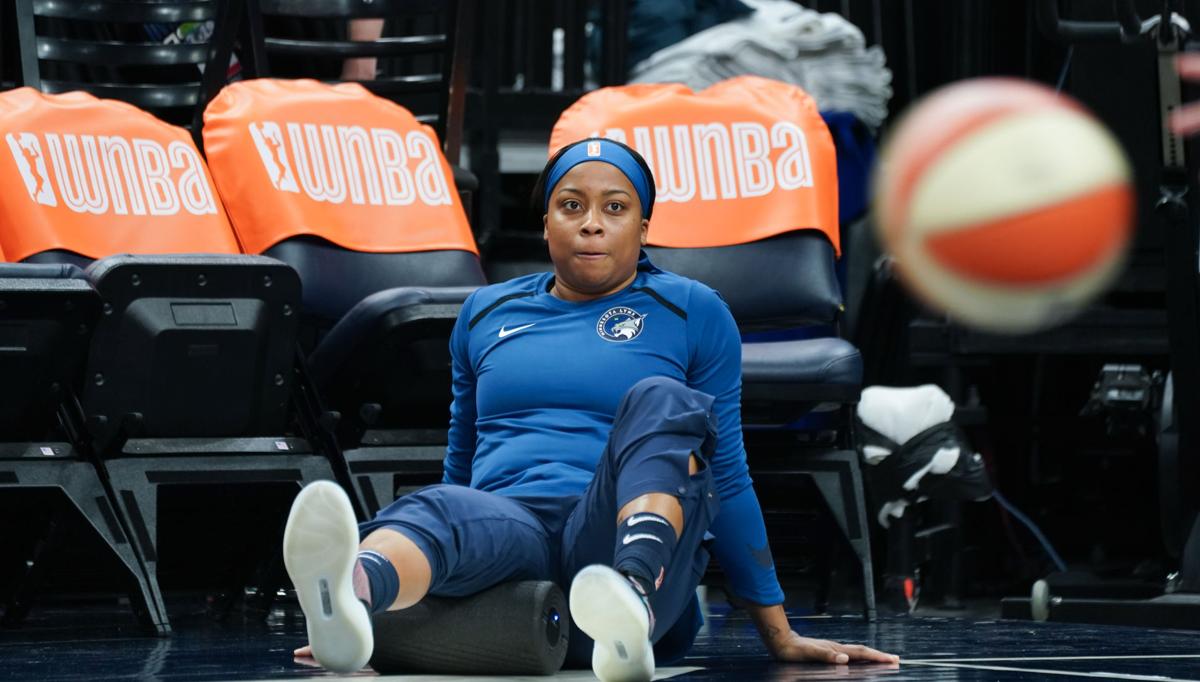 MINNEAPOLIS — Cierra Dillard did her best to put on a good face in her WNBA debut. It wasn’t much of a debut.

On the bench for all of the first half, the former University at Buffalo guard sported her Minnesota Lynx warmups and her trademark headband. Dillard raised her voice when she didn’t agree with a call by the officials late in the first quarter. She cheered when a teammate made a play, such as Odyssey Sims’ steal that resulted in a layup with less than three minutes left in the half.

The 5-foot-8 guard put her personality on display on the Lynx bench, but not on the court. She was the only player on the Lynx roster who didn’t play in the preseason opener, officially listed as a coach's decision on the scoresheet, after an 86-79 win Friday against Washington.

Then, before the end of her first week in Minnesota, she learned that she was no longer a part of the Lynx.

"Thank you Minnesota for the opportunity you’ve given me to learn from amazing talents and grow," she wrote in a tweet Saturday morning, posted less than an hour before the Lynx announced her release. "What a great organization and city. Blessed and grateful for the time I spent with a great team. Good luck in the upcoming season."

Thank you Minnesota for the opportunity you’ve given me to learn from amazing talents and grow. What a great organization and city. Blessed and grateful for the time I spent with a great team. Good luck in the upcoming seasonð¯ðð½

A second-round draft pick, Dillard was the first cut from Minnesota's training camp.

"We enjoyed getting to know Cierra," Lynx coach Cheryl Reeve said Saturday. "And we appreciate the work she put in during our training camp."

Now, she will pursue her next opportunity in professional basketball, with the help of her representation group, Maryland-based SIG Sports. Her agent, Sammy Wloszczowski, said in a n email Saturday that he will begin canvassing other teams to see if there is an opening for Dillard and already has interest from international teams for her to play after the WNBA season ends.

"There is certainly a place in the WNBA for a player of Cierra’s talent and character, it’s just a matter of finding the right fit at the right time," he said.

From Buffalo to Minnesota

Eight weeks ago, Dillard was an honorable mention All-American selection who helped UB win the Mid-American Conference championship and reach the NCAA Tournament.

Less than five weeks ago, she became a second-round WNBA draft pick, surrounded by family, her UB teammates and friends from Rochester as she heard her name called inside a sports bar less than a mile away from her high school.

Less than two weeks ago, she left Buffalo after three years. She left a campus and a city that embraced her. As a pro basketball hopeful, Dillard had to accept the fact that she was now on her own.

“It definitely excites me to do this,” Dillard said Wednesday after practice. “I’m excited not only to do this, but to learn. They know what it’s like to win. To hold championships over their heads. To be the center of the WNBA.”

Minnesota is home to some of the WNBA’s best basketball. The Lynx have won four league championships since 2011, and Dillard was working to become a part of that tradition in Minneapolis.

Dillard was one of 19 players competing for 12 Lynx roster spots, and was one of 14 players in the first week of training camp with the Lynx. Only 144 players will be on 12 WNBA rosters when the season opens May 24.

Being drafted is one thing. Making a team, though, is a whole different challenge.

The rookies were stars in college, but their time in the WNBA could come down to a matter of weeks, or even a matter of days. Dillard's first pro basketball experience lasted six days.

When she arrived in Minnesota for the start of her first WNBA training camp last Sunday, Dillard knew nothing was a given. There’s no security of having a scholarship or a spot on a roster, or knowing that you’ll have a routine, or a group of friends and teammates around you. Being the first men’s or women’s player from UB to be drafted in the NBA or WNBA no longer mattered.

She had to prove herself.

Dillard was one of seven rookies who started training camp with the Lynx, and she and her new teammates spent the first two days of camp going over installations and plays, and had their first intrasquad scrimmage Wednesday.

Dillard was one of seven guards in camp, including 13-year WNBA veteran Seimone Augustus and rookies Taylor Emery from Virginia Tech and Kenisha Bell from Minnesota.

“We have room for another guard to make the team, and we need one of these guards to make the team,” Reeve said last week, as she and her staff began to formulate its roster. “Whether they will or not, I don’t know, because we have to get through that process. What they do in games, how they conduct themselves, we’re still learning about all of that.

"For her, she’s got to be able to do what she did in college, and it’s not easy to do it, when you’re going against players who are bigger, faster and stronger. To be able to command an offense, know the plays and put her stamp on it, it’s the same for everyone, but for Cierra, you have to show you can exist with pro players.”

As Dillard participated in training camp, she also was completing her coursework to finish her degree in sociology at UB, her second undergraduate degree. She had two papers to finish and had two finals scheduled.

“I don’t feel like a pro, yet,” Dillard said. “I still have to finish college.”

In her first week in Minneapolis, where she lived in a short-term apartment with Emery in Minneapolis' Warehouse district, about 10 blocks from the Lynx practice facility, she balanced her days between basketball and schoolwork. Days began at 8 a.m. with breakfast and workouts and sometimes didn’t end until midnight.

The schedule within those tightly crammed days can change, too. A Friday morning film session in preparation for the Lynx’s preseason opener against the Mystics went long, and Dillard and her teammates didn’t get on the Target Center floor for a pregame shootaround until early in the afternoon.

Three days earlier, after she finished some schoolwork inside a hotel in Minneapolis’ North Loop neighborhood, she slipped back into the gym at the Lynx’s downtown training facility after 10 p.m., and spent the next hour shooting.

Dillard used those late nights to contemplate what she learned in her first days as a pro.

As the Lynx practiced Wednesday at the Lynx headquarters at Mayo Clinic Square, Reeve stopped Dillard as she went to her left and dribbled the ball three times at the top of the key.

In no uncertain terms, Reeve instructed Dillard on how to steer the play, and told her that the pros she will face will shut her down if she tries to make that move in a game.

Dillard didn’t flinch. She absorbed the instruction. For her, absorbing everything is key.

Reeve was impressed by Dillard’s personality and her willingness to learn, but also said that Dillard struggled to take in a completely new system in such a short time — a struggle that, she explained, is common for newcomers to the WNBA.

“I’ve thrown a lot at the rookies,” Reeve said. “Sometimes you can see (Cierra) is confident and ready to go, other times I have her head spinning. But she knows I want that, and I’m trying to challenge her take on a lot.”

Dillard wasn’t facing other college-age players, either. She faced women who have played professional basketball for five to 10 years, who make a living through the sport. They are stronger and smarter, and wiser, too.

Yet in an environment where Dillard was competing for a job, what surprised her the most was the willingness of the women around her — some of whom she watched play professionally — to give advice to her and the rookies as they began their professional careers.

Danielle Robinson, Minnesota’s point guard and a nine-year WNBA veteran, answered numerous text messages from rookies in the first five days of training camp, giving them advice about everything from particular plays to proper nutrition.

WNBA rosters must be pared to 12 by May 23, the day before the start of the regular season, but cuts can come well before the final rosters are determined. The first live evaluation came five days into training camp with the preseason opener.

About an hour before tipoff against the Mystics, Reeve outlined what she wanted to see out of Minnesota’s seven rookies.

“I want them to do what they do, when they get their opportunity,” Reeve said. “When they’re not getting opportunities, what they do on the bench is important to me. Those are all things we are looking at.”

She heeded Reeve’s words and was gregarious on the Lynx bench. She gestured and danced her teammates made big plays. She was vociferous and animated when she disagreed with a referee’s call. She was almost always the first to high-five a teammate or slap her on the back when they came off the court.

But Dillard wanted to play. She wanted that chance to prove herself.

Dillard and Martin spoke briefly in the locker room, reminiscing about their shared UB connection. Then, Dillard slipped out of the locker room and didn't return. Late Friday night, she was notified that she had been cut from the Lynx.

Earlier in the week, on her 23rd birthday, Dillard said understood the volatility that came with the hope of playing professional basketball: that nothing is guaranteed. She probably was not expecting to learn that so quickly.

“It’s definitely important, not to get ahead of yourself in all this,” Dillard said. “You have to stay within each moment. With any pro team, any pro organization, so many things can change in an instant.”

Cierra Dillard cheered for the Minnesota Lynx from the bench during a preseason game Friday night. (Glen Stubbe/Special to the News)