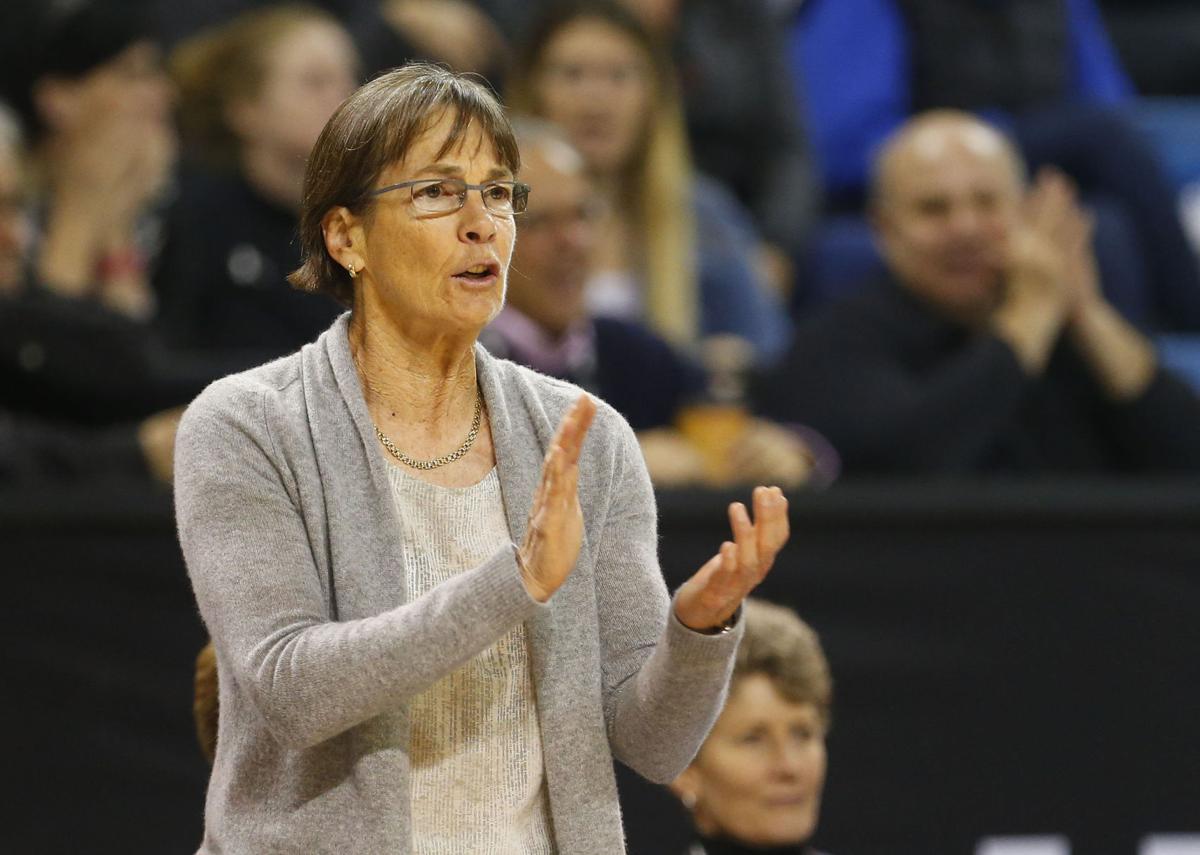 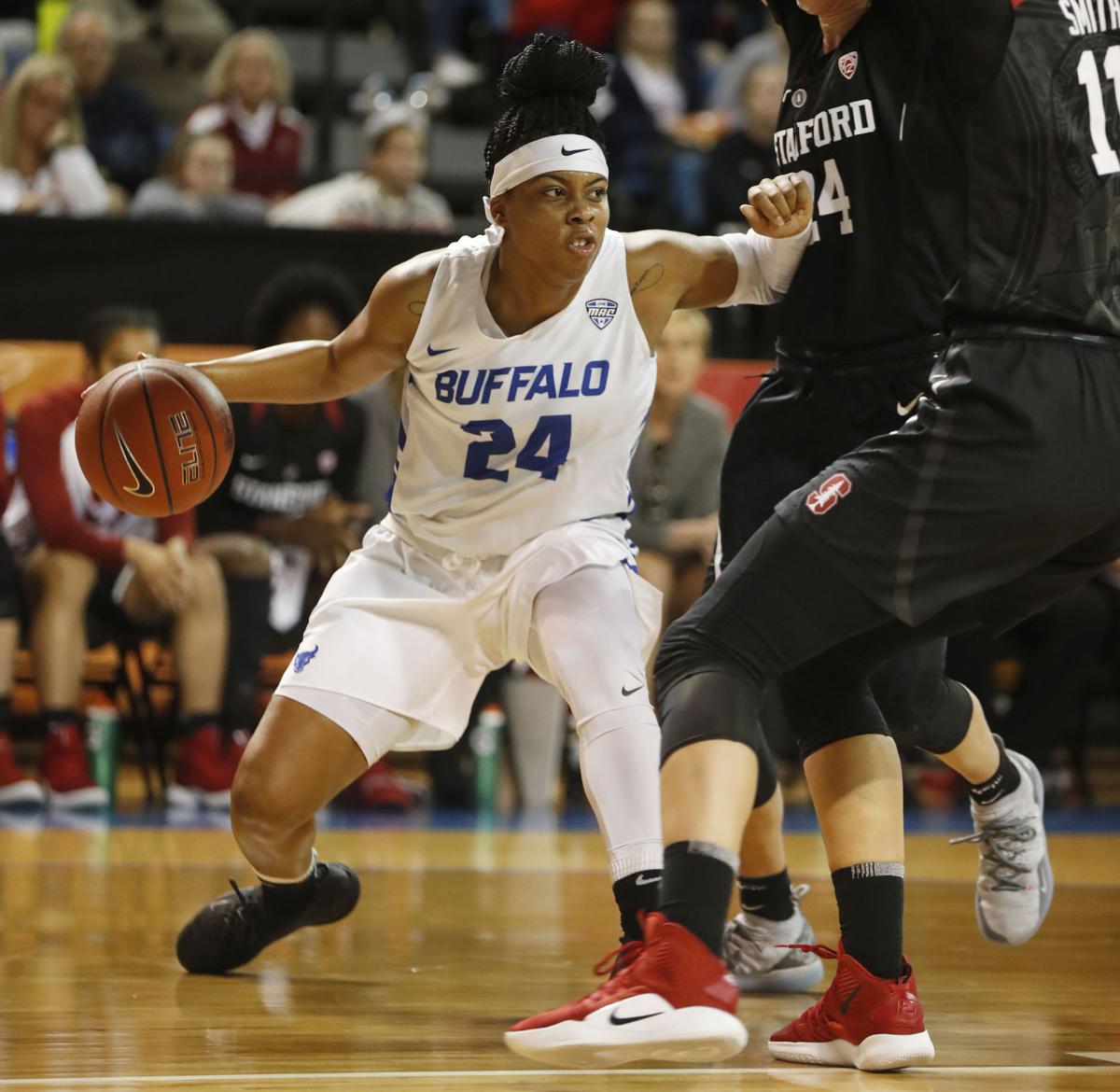 Nobody received louder applause during pregame introductions than Tara VanDerveer.

Never mind that she coached the visiting team.

VanDerveer, a Hall of Fame women’s basketball icon from Western New York who has two NCAA championships and an Olympic gold medal on her resume, guided No. 8 Stanford to a 62-55 victory against Buffalo on Friday afternoon at Alumni Arena, snapping UB’s 14-game home winning streak.

Alanna Smith scored a game-high 30 points on 12 of 22 shooting and added 13 rebounds, five assists and three blocks to lead the Cardinal. But by the fourth quarter, the announced crowd of 3,412 fans — including a group of more than 200 students from VanDerveer’s alma mater, Buffalo Seminary — was roaring for the Bulls.

UB (7-3) limited Stanford (9-1) to its season low in scoring and surged to within two points of tying the game before missing its next seven shots, allowing the Cardinal to pull away.

“This wasn’t a pretty game. But I call it a ‘gritty game,’ and very apropos to Buffalo,” VanDerveer said. “This is kind of a gritty city, like tough and aggressive, and I was really proud of our team to show that side.”

Cierra Dillard led UB with 21 points on eight of 25 shooting. Hanna Hall scored 11 points, connecting on three of eight shots from 3-point range. And Summer Hemphill, who returned to the court this week after being academically ineligible to play during the fall semester, added 10 points, eight rebounds and five steals.

UB cut its deficit to 46-44 on a 3-pointer by Hall with 6:45 to play, but missed its next seven shots, including two 3-point attempts by Hall that would have given the Bulls their first lead of the game.

Stanford, meanwhile, used an 8-point run to pull away, with Nadia Fingall’s jumper pushing the Cardinal lead to double digits with 2:41 remaining. They led by as many as 12 points with 1:42 to go.

Dillard wasn’t interested in discussing “moral victories” after being in position to defeat one of the top teams in the country.

“I don’t care if it was the L.A. Lakers,” Dillard said. “A loss is a loss. I’m just here to compete and put on a show and help my team to win, and I didn’t do that today.”

UB shot just 27.5 percent from the field for the game, compared to 39 percent by Stanford, but nearly out-rebounded the much taller Cardinal roster (45-44) and owned a 16-8 advantage in second-chance points. Stanford used its length to outscore the Bulls 28-18 in the paint.

“To have the No. 8 team in the country join us and come to our university, it says a little bit about how we’ve grown this program, the expectation of this program, the mindset of where we’re trying to go for this program, and I think that we’re on our way,” UB coach Felisha Legette-Jack said. “I think a couple of those 3s fall for us … it changes the complexion of the game.”

Once she finished speaking, Legette-Jack and VanDerveer embraced in a hallway adjacent to the court.

VanDerveer was raised in a small town near Schenectady, lived in Niagara Falls as a teenager and graduated from Buffalo Seminary in 1971. She visited her alma mater on Thursday to deliver a speech to students about leadership and women in sports.

“It was surreal,” VanDerveer said. “I haven’t really been back there — maybe one time — but the last time you’re sitting down there you’re 18 years old, and here you are 47 years later, you know, and you’re just like, ‘God, I wish I could tell that kid that stuff I know now.’ It was emotional for me and it was really fun to meet the high school kids and talk to them and the teachers and everything.”

VanDerveer was named the head women’s basketball coach at Stanford in 1985 and led the program to NCAA Women’s Division I national championships in 1990 and ’92. She left the program for one season to coach the U.S. national team to the gold medal at the 1996 Olympic Games in Atlanta.

After Buffalo Seminary, VanDerveer played college basketball at Albany State for a year before continuing her education and playing career at Indiana.

Prior to joining Stanford, she coached at Idaho and Ohio State and led the Buckeyes to four Big Ten titles in five seasons.

Legette-Jack, a Syracuse native, served as the head coach at Indiana from 2006 to ’12 before taking the reins at UB. She said she first met VanDerveer during her tenure with the Hoosiers and thanked her for returning to Western New York to play the Bulls.

“She’s such a giver to this sport. She’s such a believer in women’s basketball and women in general,” Legette-Jack said. “She’s just been a constant mentor for us, even from afar. She invited me to her home for the summer so we can talk about Xs and Os and I just love that about her.

“She just wants to grow the game and she wants to know that the game is in good position when she walks away. I think that she realizes that in this game, that coaches like me are stepping up and trying to be the stakeholders in women’s basketball for years to come.”

Could Arkansas keep their impressive start going against Texas A&M (-4.5)?

Could Arkansas keep their impressive start going against Texas A&M (-4.5)?

No. 16 Coastal Carolina made the most of the final three minutes of regulation to eke out a 28-25 win against the Bulls on Saturday at UB Stadium.

A basketball player with a familiar name and strong athletic bloodlines plans to join the University at Buffalo women’s basketball team for the 2022-23 season.

Carrie Owens, Judy Po-Chedley Wilkins and the 1999 men’s volleyball team were honored during a dinner ceremony at D’Youville College.

The game takes place at noon Saturday at UB Stadium.

Kevin Marks, Isaiah King and Khamran Laborn return to their hometown this weekend when the Bulls (1-2) play Old Dominion (1-2) at 6 p.m. Saturday.

According to preseason poll of Atlantic Hockey coaches, Canisius College is expected to post the greatest challenge to American International University's bid for a fourth consecutive conference championship.

A fifth-year senior, Riggins knows he has to use his voice to help the Bulls (1-1), who host No. 16 Coastal Carolina (2-0) at noon Saturday at UB Stadium.

The University at Buffalo football team opens its season Thursday against Wagner. Here's a closer look at UB's 2021 schedule, game by game.

Maurice Linguist wastes no time outlining the benefits of the University at Buffalo football team getting national exposure.

Erik Brady: Step aside Brian Kelly, Frank Layden will show you how to coach and tell jokes

"As it happens, Niagara University’s own Frank Layden was the best coach/comedian of his time," writes Erik Brady.