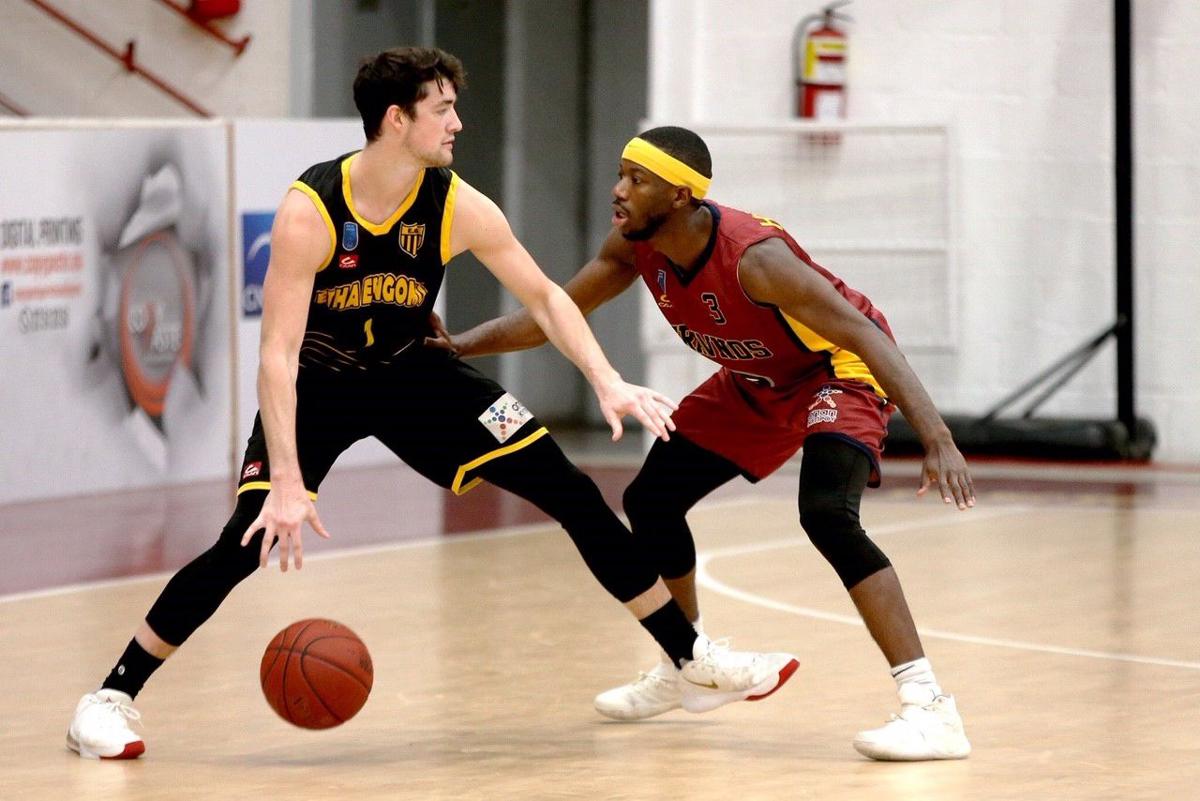 Colin Dougherty, left, playing for Michelin Etha Engomi in the Cypriot League, participated in just four games before the season was canceled due to the coronavirus pandemic. (Courtesy of Dougherty family) 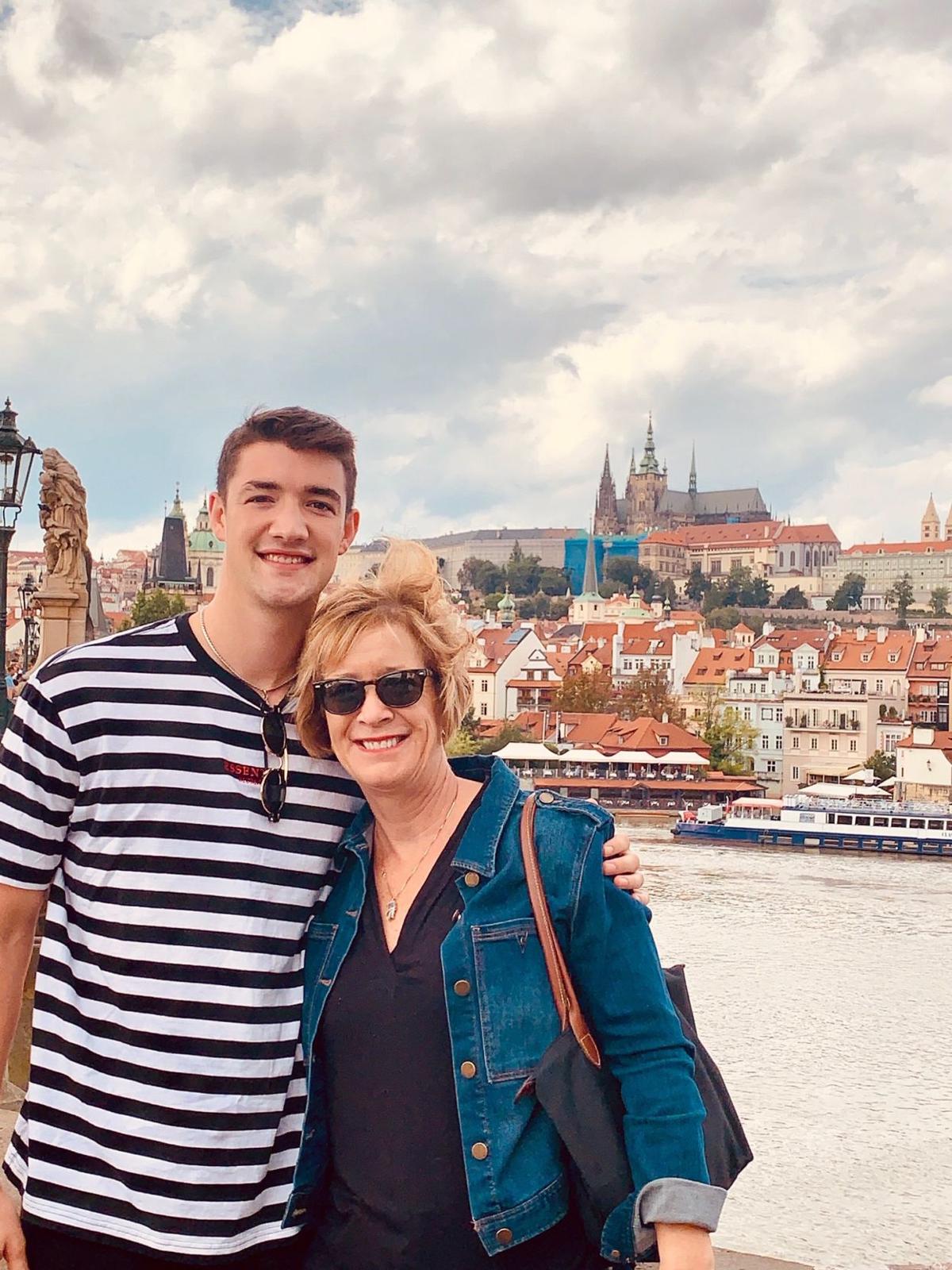 Colin Dougherty and his mother Tracey pose for a picture in Prague last year. (Courtesy the Dougherty family)

The Odyssey is an epic poem about a hero’s journey. Cyprus merits mention in it five times. Which brings us to Colin Dougherty.

His is a story of two odysseys: The long one, from basketball-loving toddler in Lockport to professional player in Cyprus. And the harrowing one from Cyprus back to Lockport in March, when Covid-19 canceled his season.

“I was freaking out,” he says. “My first thought was, ‘I finally get a chance to play pro basketball, and my season gets cut short. And my second thought was, ‘What’s going on with this virus? And how am I going to get home right now?’ ”

Dougherty, 23, always dreamed of playing in the NBA when he was a kid. He did play in the NFL — as in Niagara Frontier League — at Lockport High School, but pro basketball looked unlikely for a point guard who stood 5-foot-10 and weighed 135 pounds.

So he spent a year in prep school in Connecticut, then played four years in Division III at Hobart — and grew to be 6-4, 180 pounds.

John Dougherty, his father, had a similar growth spurt. He was a 6-foot guard at St. Joseph’s Collegiate Institute who grew to be 6-2 while playing for Buffalo State. John hit a free throw with no time left in 1976 to give Buff State a 67-66 upset over Canisius. A framed photo of the moment hangs in the family’s basement rec room.

“It’s the coolest picture ever,” Colin says. “Who doesn’t dream of that exact same scenario?”

John retired from Rich Products as treasurer in 2018 after a 37-year career. He taught Colin how to play basketball “as soon as I could walk,” as Colin puts it.

When Colin was in fourth grade, John began driving him to South Buffalo to work out under the tutelage of Mike Walton, who played on the Canisius team beaten by his father’s free throw. Colin developed into an all-league player at Lockport but had no bites from Division I programs. He graduated a year ago as No. 2 in career points scored in Hobart history.

“I love Hobart with all my heart,” Dougherty says. “It was great for me athletically, academically and socially. And my parents could come to all the games.”

Division III is not the usual route to a pro career. That's where his mother, Tracey, comes in. She played basketball at Erie Community College. One of her best friends at DeSales Catholic High School was Bob MacKinnon Jr., whose late father then worked for the Buffalo Braves.

“I had lost touch with Bobby over the years,” Tracey says. “Then we reconnected on Facebook a few years ago.”

By this time, MacKinnon Jr. was a longtime coach in the NBA’s development league. He’s living now in North Carolina, where he was once an assistant coach at the University of North Carolina.

“I told Bobby, ‘We’d love to have Colin work out with you,’ ” Tracey says. “We got him down there working with Bobby, and he told Colin, ‘Don’t take your eye off the prize. We’re going to get you to Europe.’ ”

MacKinnon recommended an agent who got an in-season tryout for Colin with Michelin Etha Engomi, which plays in Nicosia, capital of Cyprus, the Mediterranean island nation. Teams in the Cypriot League can carry five American players, with no more than four on the court at one time. Colin thought he’d performed well in the tryout in November, but the coach told him the timing wasn’t right.

“I was devastated,” Colin says. “Everything seemed like it was lining up, and then the rug was taken out from under me. I was so sad. I thought that was my one chance.”

Then, a few days after Christmas, Colin got a text from the coach.

“It said, ‘Hey, Colin, did you find a team yet?’ I was so excited. I’ve always known since I was a little boy that I wanted to play basketball for a living. And then when I got there in January, I made the team. It was a dream come true.”

Tracey, a flight attendant for United, flies international routes. She had flown with Colin to Cyprus for the first tryout and flew with him again for the second one.

“It was hard letting him go so far away,” she says. “It’s a heavy lift getting there and back. But you’ve got to take opportunity when it knocks.”

Colin was added to the roster in February. The Americans on his team included one who is 7 feet tall and another who is 6-10.

“They were all Division I talents,” Colin says. “The vibe was totally different from Division III. You don’t see a ton of 7-footers at the Division III level.”

Colin played well, scoring in double digits off the bench. Tracey flew to Cyprus to see him play in March. And then, on the night she was set to see her son play pro ball for the first time, no fans were allowed to attend because of the virus.

Tracey watched on TV instead. They were at dinner after the game when word came that the season was suspended. A day later, it was canceled. Colin’s dream season had lasted all of four games.

“It was the safest thing, but it sucked, the whole timing of it,” he says. “But I was lucky it happened while my mom was there. She is the reason I got home right away.”

Tracey arranged flights to London and from there through Newark to Buffalo. Home is what the Odyssey is all about.

“I’m always happy to get home,” Tracey says. “But this time it felt really good to be in the good ol’ USA.”

Colin hopes to get back to pro basketball when the world gets back to normal. Is his a dream deferred or derailed?

“I’m working out every day,” he says, “to make my dream come true.”

Colin Dougherty, left, playing for Michelin Etha Engomi in the Cypriot League, participated in just four games before the season was canceled due to the coronavirus pandemic. (Courtesy of Dougherty family)

Colin Dougherty and his mother Tracey pose for a picture in Prague last year. (Courtesy the Dougherty family)