NEW YORK (AP) — Breaking is in Victor Montalvo's blood. He is a descendant of twin breakers — his father and uncle — who were performing in Mexico long before they taught a young Montalvo to spin on his back.

Born in Kissimmee, Florida, the 28-year-old who also goes by B-Boy Victor has mastered the foundations of the dance form. He has power. He has the flavor and swagger expected of a diehard b-boy. His movement syncs with the breakbeat flowing from the DJ's turntables.

He hopes to take breaking further than his relatives ever dreamt, to battle his way to a medal ceremony, when the now-global dance art debuts at the Olympic Summer Games less than two years from now.

"I feel like I have a really high chance," Montalvo told The Associated Press.

He is among dozens of champion b-boys and b-girls — a term for a male or female entrenched in the culture of hip hop — who are charting a path to the 2024 Games in Paris. The International Olympic Committee announced two years ago that breaking would become an official Olympic sport, a development that divided the breaking community between those excited for the larger platform and those concerned about the art form's purity.

But after the Red Bull BC One World Final, held earlier this month in the birthplace of hip hop and a short distance from the very streets where Black and Puerto Rican New Yorkers pioneered the art of breaking, the field of Olympic competitors is starting to take shape. The Nov. 12 event also attracted some of the original b-boys and b-girls, as the hip hop community prepares to celebrate 50 years since the culture's founding in 1973.

"You never thought that something you were doing for fun was going to go around the world," said Douglas "Dancin' Doug" Colón, a b-boy of the first generation of breakers from Harlem who beamed with pride over the dance form's acceptance into the Olympics.

Along with Colón, first generation b-boy Trixie sat near a circular stage in the center of Manhattan's Hammerstein Ballroom. One by one, Red Bull BC One World Final competitors from Canada, China, France, Italy, Kazakhstan, South Korea and Venezuela took to the battle stage. The energy drink beverage company runs the world's largest breaking competition.

The OGs offered blessings to their descendants by giving them dap — a friendly gesture of greeting in the Black and Latino communities that communicates solidarity and well wishes to the recipient. Joe Conzo, Jr, a photographer known in the community as "Joey Snapz," who documented hip hop in the Bronx from its infancy, also sat stageside taking pictures of the Olympic hopefuls.

"Nothing's going to change the culture, the culture stays the same," Colón said. "Even though it's now an Olympic sport, people back in the hood will still be doing their thing."

Victor Alicea, a Red Bull BC One World Final judge, told the AP that judging competitions within the hip hop culture has always been very subjective. But that won't be the case with the Paris Olympics, where officials will use a newly developed judging system to decide which b-boy or b-girl bested their opponent in one-on-one battles.

The Trivium judging system, created for the debut of breaking at the 2018 Youth Olympic Games in Buenos Aires, is a digital scoring platform that allows judges to react in real time to breakers' physical, artistic and interpretative qualities or their "body, mind and soul." A panel of five judges scores each breaker on creativity, personality, technique, variety, performativity and musicality. The scores can adjust throughout the battle, based on how a breaker responds to their opponent.

Scores can be lowered if a breaker "bites," or copies, a set of moves from their opponent. Misbehavior, such as deliberate physical contact with an opponent, and other unsportsmanlike conduct can also lower a breaker's score.

"I look for someone that takes over the floor. It's a battle. It's not just you dance and then I dance. You've got to bring it," said Alicea, who is also known as B-boy Kid Glyde.

Montalvo, who was ranked as the world's top b-boy after a world championship competition in Paris last December, said his path to the Olympics will require intense training. It will also require more winning performances at competitions sanctioned by the World DanceSport Federation, an IOC-approved body administering the battles. Breakers who do well in those events score points that help them qualify for the Paris Games. Olympic qualifiers kick off in September and run through June 2024.

At the end of the process, 16 b-boys and 16 b-girls will be allowed to compete over two days at the iconic Place de la Concorde, an outdoor public square in Paris.

That gives Olympic hopefuls lots of opportunities to sharpen their skills for the high stakes battles.

What sets Montalvo apart from other b-boys, he said, is his command of judge-favored foundations of breaking: "toprock" moves, footwork, "downrock" moves done closer to the floor, "power" moves showing acrobatics and strength, along with the classic "headspins," "windmills" and "freeze" poses.

During a Red Bull BC One quarterfinal round battle against Japan's Yuki Minatozaki, Montalvo transitioned from a windmill into a downrock move in which his legs moved back and forth so quickly that they looked like turning Double Dutch ropes. Minatozaki responded with a smirk, half-hearted applause and sarcastic thumbs up — all in the spirit of good sportsmanship — before exploding into a headspin and showcasing energetic standing footwork.

"It feels great that the sport now has a lot more eyeballs on it," Minatozaki, who goes by B-boy Yu-Ki, told the AP through a translator. The 23-year-old has been breaking since the age of five. He intends to seek a spot in the Paris Games, he said.

Minatozaki lost his battle against Montalvo, who also went on to the final to defeat Lee-Lou Demierre of the Netherlands, another likely Olympic contender. That victory did not earn Montalvo points toward qualifying for the Olympics.

India Sardjoe, a 16-year-old breaker from the Netherlands, won the Red Bull BC One World Final b-girl title. She said she planned to focus next on competing in crew battles – this entails a team of breakers competing against another for a group title and bragging rights, reminiscent of breaking's roots in the Bronx. Sardjoe was fresh off of claiming the top honor at the European Breaking Championships, a WDSF event held in Manchester, England on Nov. 6.

The Red Bull title is an accomplishment, nonetheless.

"I had to battle the defending champion, so that's not nothing," Sardjoe said. "But I was super happy to battle against her."

Like Sardjoe and Montalvo, Edra told the AP she will compete in WDSF events over the next year and half for a spot in the Olympics. On Saturday, she competed in the Breaking for Gold Challenge Series in Tokyo and took home a silver medal behind Lithuania's Dominika Banevič, known as B-Girl Nicka, who won gold.

"I'm competing against the best of the best," Edra said. "Because I have such a high standard for myself, I try to out-train everybody. The training is crazy — I've got bruises on my elbows and my knees from practicing moves over and over. It's a lot of commitment because we don't have as many resources as other sports do."

Isis Alexandra Granda Chalen, a b-girl who grew up in Ecuador before moving to the U.S., started young in ballet, folk and contemporary dance. But breaking spoke to her rebellious nature, particularly at a time when she questioned if those other dance forms were aligned with her dreams.

"The moment that I understood that I have more responsibility for myself, I put more work into breaking and I got the opportunities to be here," Chalen, 27, said ahead of the Red Bull BC One World Final.

"Now, we're going to do this transition, from artists to athletes," she said of her Olympic dreams. "It's a big opportunity for every country. I came from Latin America, where there aren't as many opportunities. But the Olympics are for everybody."

Sunny Choi, a Queens, New York-based b-girl who won the 2022 Red Bull BC One Cypher USA in September, said there's an accessibility to the art and sport of breaking that will make it a huge draw at the Paris Olympics. She hopes to earn a spot on the U.S. team.

"We have a lot of diversity in breaking, which is really beautiful about what we do, because there aren't many financial barriers to entry," Choi told the AP. "If you have a clean floor and, nowadays, access to YouTube or something where you can learn, and some music, you can just do this on your own."

She said her nascent Olympic journey has already required personal and professional sacrifices that initially had her questioning if she wanted to compete at all.

"I'm one of those all or nothing people," Choi said. "I've done a lot of soul searching to remove some of the mental blocks. I feel like this journey is going to pull out a lot from me and I just need to be ready for that."

Aaron Morrison is a New York City-based national writer and member of the AP's Race and Ethnicity team. Follow him on Twitter: https://www.twitter.com/aaronlmorrison.

Some prep coaches opt to pray, while others punt

Some prep coaches opt to pray, while others punt 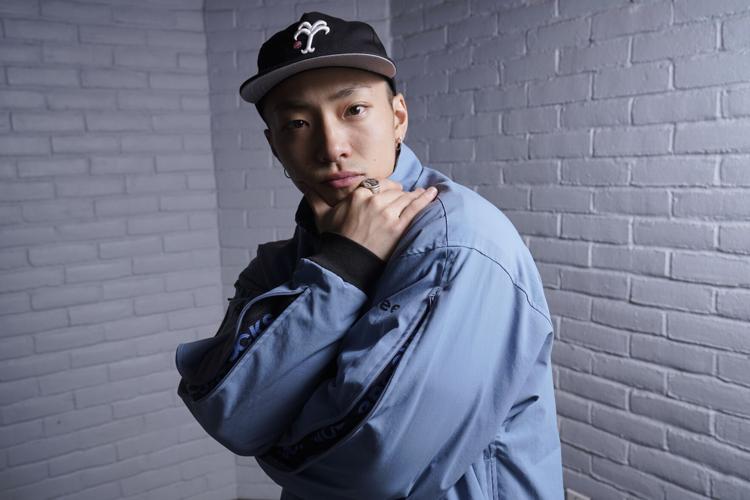 Yuki Minatozaki, also known as B-Boy Yu-Ki, of Japan, poses for a portrait during the media day for Red Bull BC One World Finals, Friday, Nov. 11, 2022, in New York. The International Olympic Committee announced two years ago that breaking would become an official Olympic sport, a development that divided the breaking community between those excited for the larger platform and those concerned about the art form’s purity. (AP Photo/Frank Franklin II) 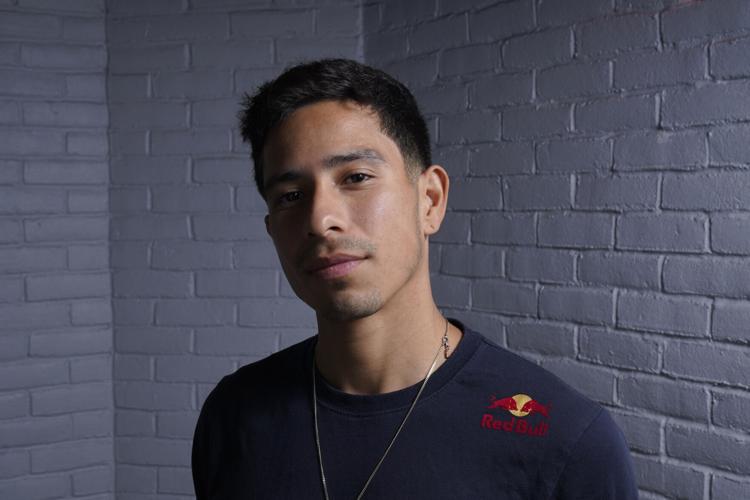 Victor Montalvo, also known as B-Boy Victor, poses for a portrait during the media day for Red Bull BC One World Finals, Friday, Nov. 11, 2022, in New York. The International Olympic Committee announced two years ago that breaking would become an official Olympic sport, a development that divided the breaking community between those excited for the larger platform and those concerned about the art form’s purity. (AP Photo/Frank Franklin II) 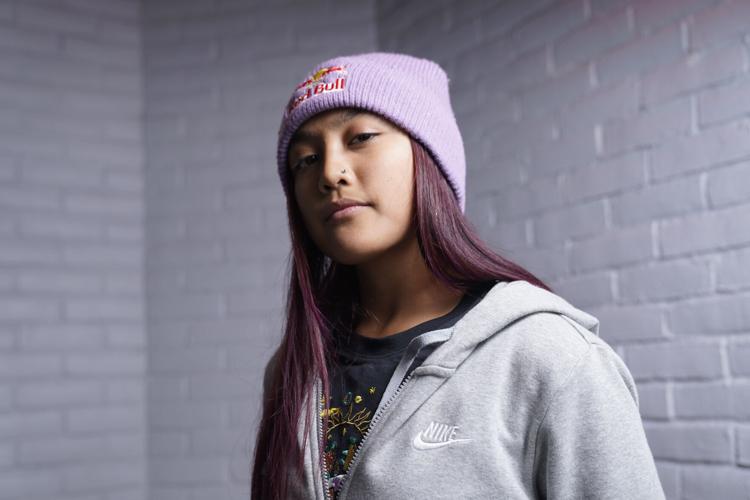 Logan Edra, also known as B-Girl Logistx, poses for a portrait during the media day for Red Bull BC One World Finals, Friday, Nov. 11, 2022, in New York. The International Olympic Committee announced two years ago that breaking would become an official Olympic sport, a development that divided the breaking community between those excited for the larger platform and those concerned about the art form’s purity. (AP Photo/Frank Franklin II) 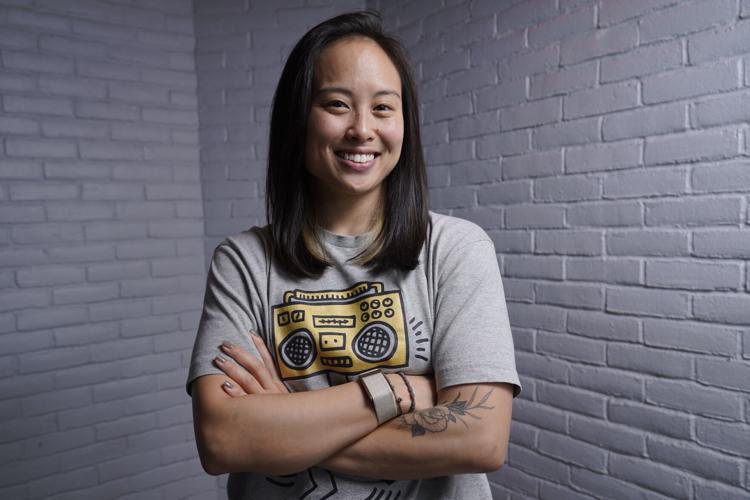 Sunny Choi, B-Girl Sunny, poses for a portrait during the media day for Red Bull BC One World Finals, Friday, Nov. 11, 2022, in New York. The International Olympic Committee announced two years ago that breaking would become an official Olympic sport, a development that divided the breaking community between those excited for the larger platform and those concerned about the art form’s purity. (AP Photo/Frank Franklin II) 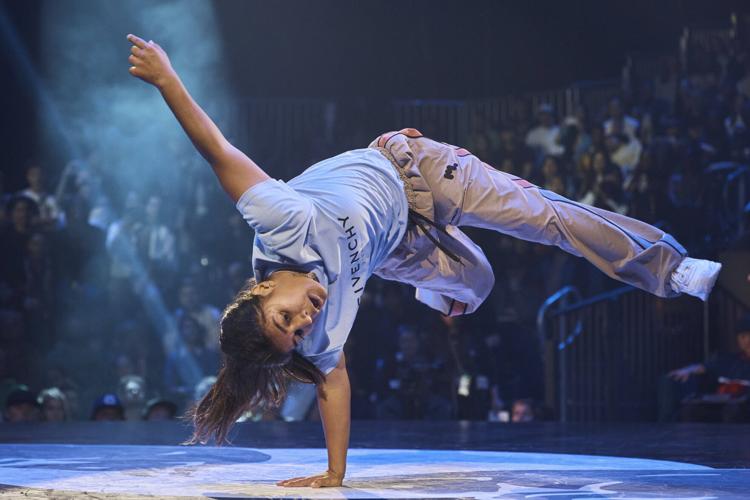 India Sardjoe, also known as B-Girl India, from the Netherlands, competes in the B-girl Red Bull BC One World Final at Hammerstein Ballroom on Saturday, Nov. 12, 2022, in Manhattan, New York. The International Olympic Committee announced two years ago that breaking would become an official Olympic sport, a development that divided the breaking community between those excited for the larger platform and those concerned about the art form’s purity. (AP Photo/Andres Kudacki)