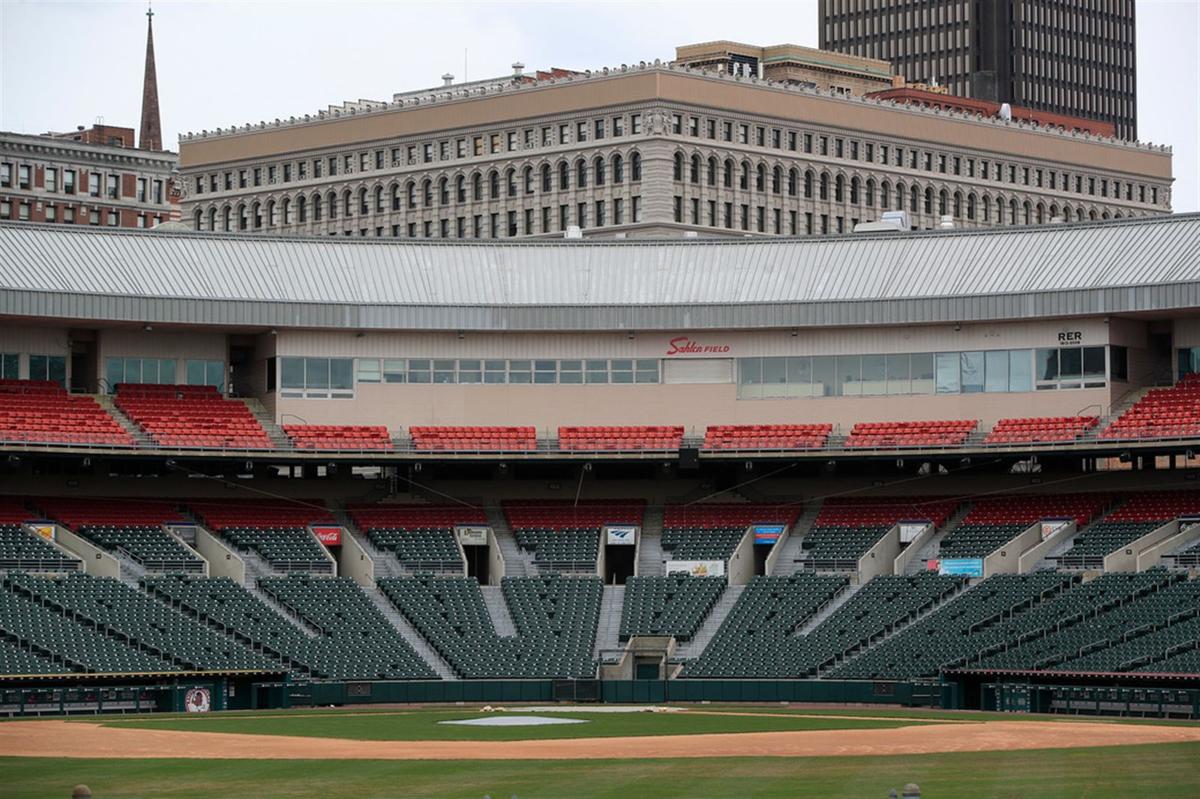 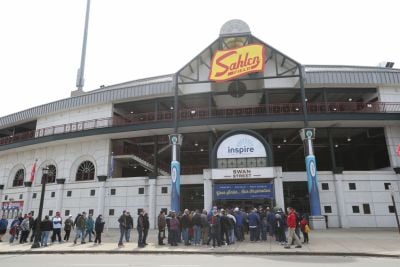 Fans line up to enter the gates at Sahlen Field for the Bisons' season opener on April 4, 2019.

If life was normal, the Buffalo Bisons would have been playing the Lehigh Valley IronPigs in spectacular 80-degree weather Tuesday night in Sahlen Field. Momentum would have been building for their annual Independence Eve bash with the Buffalo Philharmonic Orchestra.

The July 3 game, this year slated against the Syracuse Mets, and postgame concert/fireworks show has been one of the annual highlights of summer downtown since it was born in 1995. But it won't happen this year.

The day everyone in Minor League Baseball has dreaded for weeks became a reality Tuesday with the announcement that the 2020 season for all levels of the minors has been canceled because of the coronavirus pandemic.

"Although this might not be surprising given the way our world has changed over the past few months, the official news that we won't have baseball at Sahlen Field is very difficult for us, heartbreaking for our organization and for our fans," Rich Baseball Operations president Mike Buczkowski said during a news conference on the ballpark warning track. "Not being able to share the excitement of being at a Bisons game, especially on a beautiful day like today where the weather is so nice, will make it a very different summer for our community, our fans and certainly for the Bisons."

Mike Buczkowski: “Minor League Baseball has always been able to play a part in our nation’s recovery until this year.” #Bisons #Bluejays pic.twitter.com/d24NKWr5d1

The 2020 season was slated to be the 136th in the history of professional baseball in Buffalo. It would have been the Bisons' eighth as the Toronto Blue Jays' Triple-A affiliate and the team was scheduled to be in its first season under new manager Ken Huckaby, a former Toronto catcher.

"It is with deep regret that I confirm that for the first summer in 137 years the League will play no games in 2020," said part of a statement from longtime International League president Randy Mobley, whose circuit dates to 1884. "Until just a few hours ago, the League and its 14 member teams continued to plan and prepare for the possibility of playing a 60-game, shortened season. Due to the many Covid-19 related challenges that would accompany staffing team rosters for a two-month season, Major League Baseball has now advised that they will not be providing players to the teams of Minor League Baseball in 2020."

The Bisons closed their 2019 season Sept. 2 with a 5-3 win at Scranton/Wilkes-Barre and the final game downtown was a 7-6 loss to Rochester on Aug. 29. They're not expected to take the field again until April 2021 – which means more than 19 months between games for a franchise that dates to 1877.

This will be the longest downtime for the Herd since the International League franchise was lost in June 1970, when it was transferred to Winnipeg as Buffalo ownership was in financial ruin with attendance virtually nil in War Memorial Stadium. The franchise was reborn as a Double-A club in 1979 thanks to a group culled together by former Mayor James Griffin, was purchased by Rich Products in 1983 and returned to Triple-A in 1985 after owner Bob Rich Jr. bought the Wichita franchise in the American Association.

New general manager Anthony Sprague, who took the helm from Buczkowski a few days before spring training and the club's offices were shut down in March, said he was still processing the loss of his first season.

"This is a very odd time, unbelievable that we're here with no baseball, and I know our fans are feeling pretty down about that," Sprague said. "We are as well, but we will be back in 2021 and we'll have a great season."

Before sending employees home to work remotely in March, Sprague told them to stay prepared to have the scheduled home opener on April 17. That date passed and he remained optimistic the season would resume until he talked to an team sponsor from the medical field.

"They really shook me up a little bit with what they thought was going to happen and where this summer was heading," Sprague said. "I didn't believe it. ... That was the first instance where I said, 'Oh my God, we may not play this year.' That was a gut shot and really hard to take."

While Major League Baseball is preparing to open Summer Camp on Wednesday and its 60-game season on July 23, the minors simply can't play without fans in the stands.

The big leagues derive revenue from television and other media rights, monies that aren't available for the minors. Players who do not make the major-league roster in Toronto might be working out in Buffalo in case they are needed, but those workouts would not be open to the public.

With little revenue coming in, minor-league teams have furloughed most of their employees. The Bisons are no different and their list includes radio/TV play-by-play man Pat Malacaro.

The disappointment felt in Buffalo is similar around the International League. The Rochester Red Wings (Minnesota) will not have a season for the first time since 1894 while the Indianapolis Indians (Pittsburgh) date to 1902. The Pawtucket Red Sox (Boston) were set to celebrate their final season in McCoy Stadium after a run that began in 1973 but Rhode Island fans will not get the chance to say goodbye to their team, which is scheduled to move to Worcester, Mass., in 2021.

Sprague said the Bisons will be in e-mail contact with all ticket holders about refunds or credits for the 2021 season. Fans also can e-mail info@bisons.com with questions.

The finality of the moment was difficult for Buczkowski, a Bisons employee since 1987 and the longest-tenured GM in franchise history.

"It's difficult but we're not alone. Everybody is suffering but there are people suffering more than missing baseball," Buczkowski said. "People have lost lives, they've lost jobs. Baseball has played a part in the healing a lot of times over the years when tough things have happened. We were looking forward to playing our role ... Today it becomes official we can't do that."

A staff member since 1987, I'm a Baseball Hall of Fame voter, an inductee into the Buffalo Baseball HOF and the local chapter chair of the Professional Hockey Writers Association. And I insist only Chicago and New York can come close to Buffalo pizza.

Inside Baseball: The fear is that the minors will never be the same

Two words that describe the situation for Minor League Baseball. The Bisons and roughly 160 other teams are on pause until April 2021. We have no idea what things will look like when they come back. And for many teams, if they come back.

Buffalo Bisons broadcast team Pat Malacaro and Duke McGuire find themselves facing a summer unlike any other.

“I want to get back to the ballpark so bad,” said the well-known Buffalo beer

If Bisons' season is canceled, you can kiss the summer goodbye

No Star Wars or Superhero Nights. No BPO concert on July 3. No Buster Bison. No Wing races. No Conehead. No bobbleheads. No Friday night happy hours or postgame fireworks. Unimaginable

This is the second in a series looking at Buffalo sports’ greatest what-ifs. Read Part 1. Today: What if Buffalo had landed a major league baseball team in 1991? Buffalo is an NFL and NHL town. In the 1970s, it was an NBA town, too. In the 1990s, it almost became an MLB town. The slogan of the city’s

Fans line up to enter the gates at Sahlen Field for the Bisons' season opener on April 4, 2019.