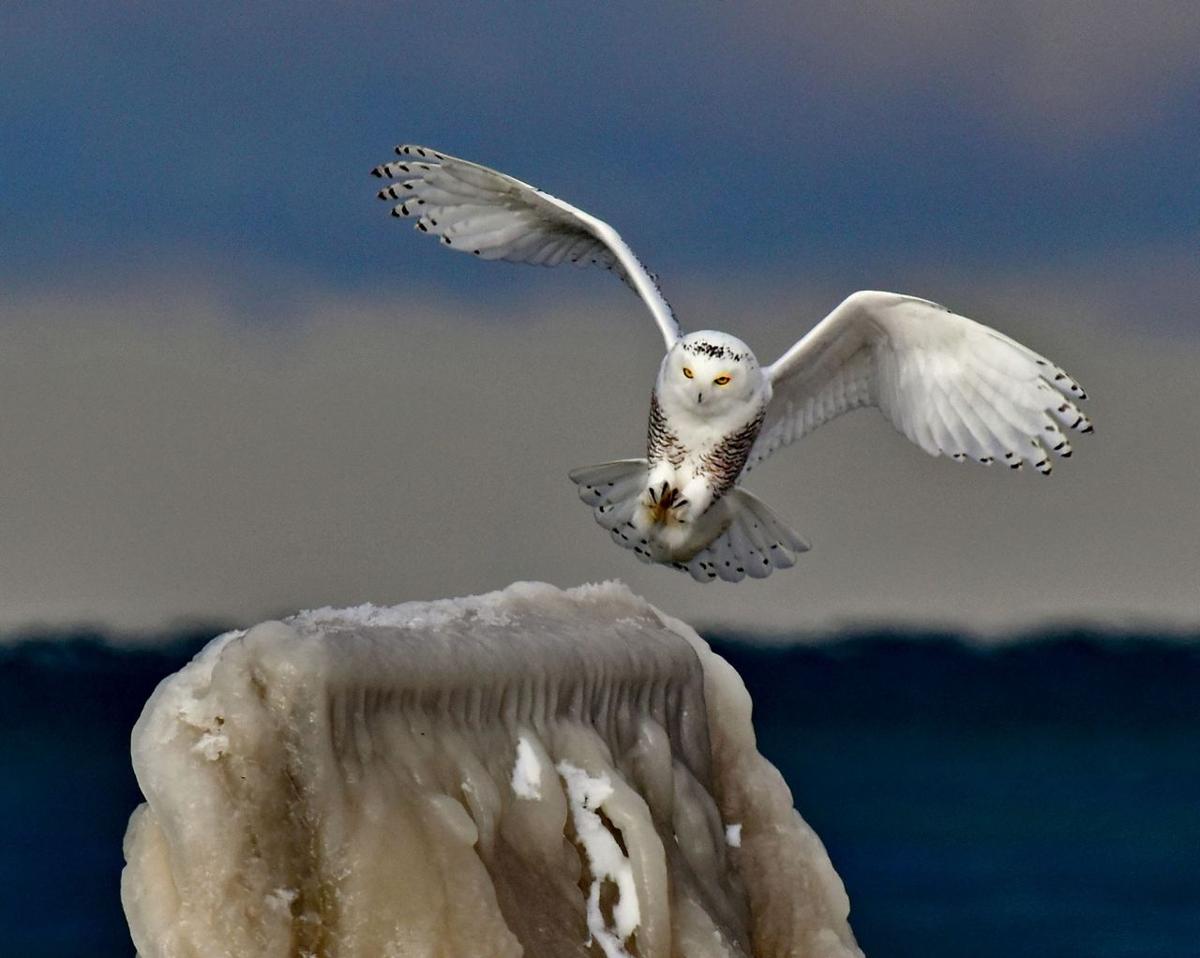 This award-winning snowy owl shot was captured on the Wilson pier last year. There's a good chance you will see a snowy owl in Buffalo Harbor during the Birds on the Niagara festival. (Photo courtesy Joel Spring) 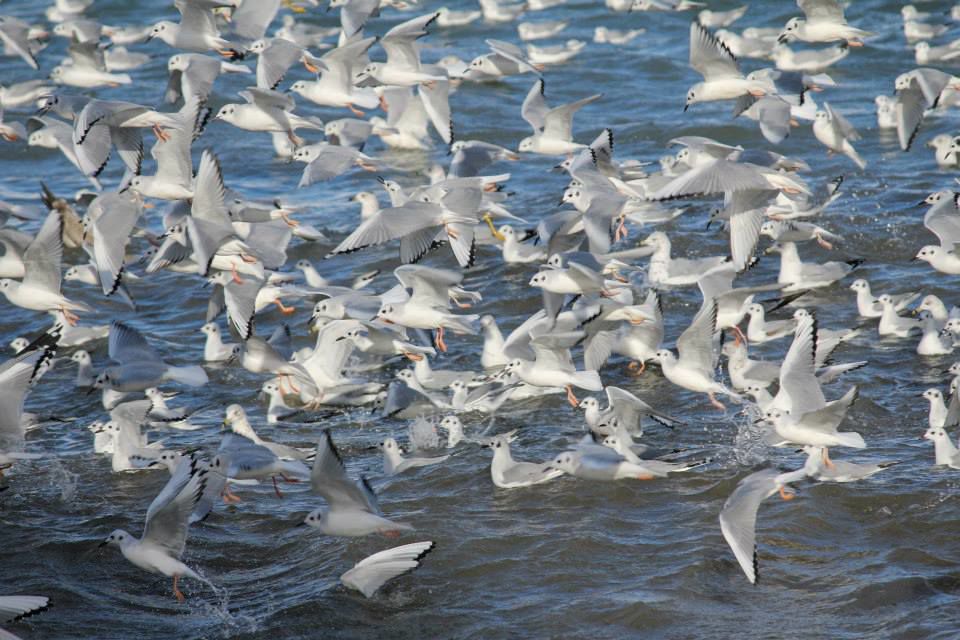 These Bonaparte's gulls were on a feeding frenzy near Rich Marina, Buffalo. (Photo courtesy Jay Burney) 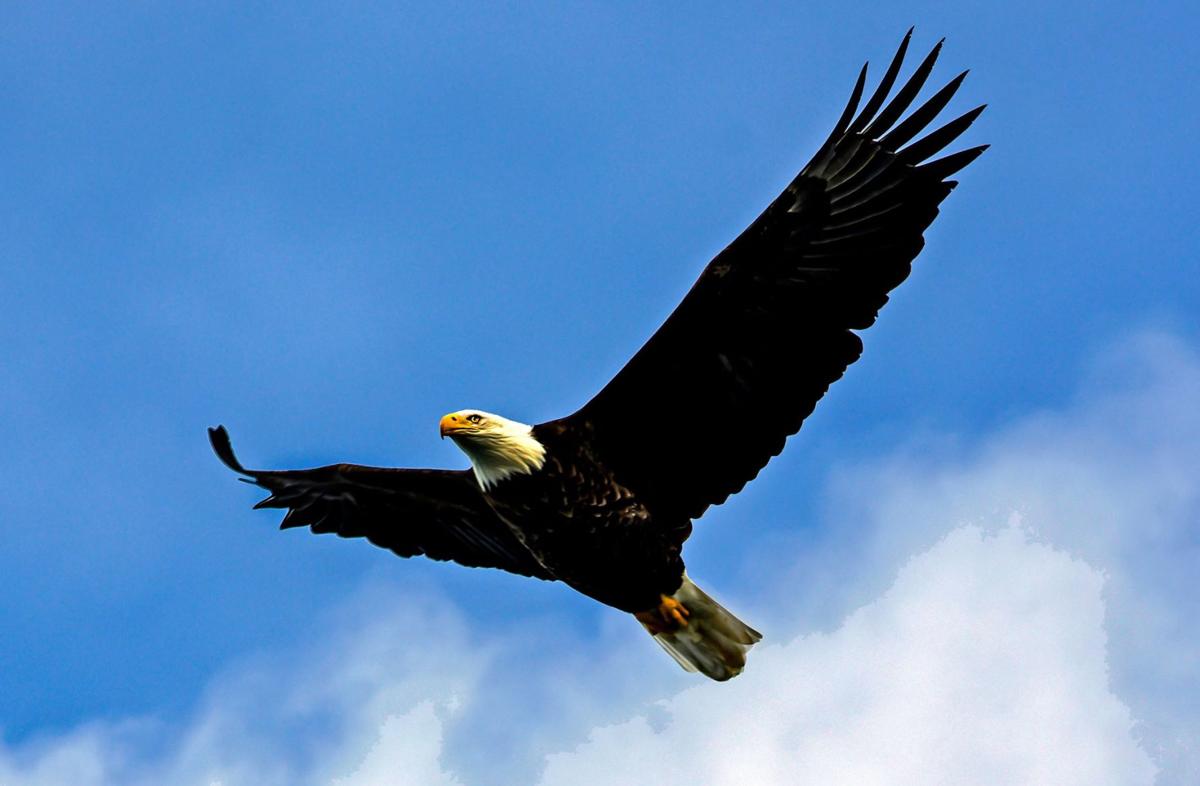 Bird enthusiasts from Western New York and beyond will gather this weekend to pay special recognition to one of the area’s most treasured natural resources, our feathered friends on Niagara River. If you don’t know what makes our area unique in the world of birds, this is a fantastic opportunity to find out.

In December 1996, the Niagara River Corridor was recognized as a globally significant Important Bird Area, jointly identified by Canada and the United States.

“The Niagara River Corridor hosts hundreds of thousands of winter waterfowl and gulls,” said Jajean Rose-Burney, deputy director of the Western New York Land Conservancy and keynote speaker at this year’s Birds on the Niagara Festival on Feb. 14-15. “Unlike nearly all other freshwater this far north, the river stays open all winter, making it possible for these birds to find food.”

“The river is also an important migratory flyway for birds that nest here in the summer, but head to Central and South America during the winters,” Burney added. “At the peak of the spring and fall migration, you can see clouds of these birds flying at night on radar.”

This is the second consecutive year that the Birds on the Niagara festival is being held for the benefit of local birders, as well as those who know nothing about birding. However, it’s much more than that. It’s a celebration of our distinctive asset in our natural world, an unbelievable combination of water birds that gather here year after year.

“The festival will draw attention to the incredible diversity of birds on the Niagara River in the winter,” Burney said. “The spectacle of tens of thousands of waterfowl and gulls on the river, diving under ice flows, catching fish and clams, flying together in formation, is worthy of a National Geographic documentary. When people see this, they will want to protect it.”

Creating a better awareness for this true natural resource is important for the future on many levels. The sponsors recognize this, and encourage more people to engage on some level with nature, even if it’s just to watch. The state’s Department of Environmental Conservation, Office of Parks, Recreation and Historic Preservation, Buffalo Audubon, the Western New York Land Conservancy, Buffalo Ornithological Society, the Buffalo Museum of Science/Tifft Nature Preserve, Blackrock Riverside Alliance and the Pollinator Conservation Association, and special events like the Grand Island Footprints Festival all work together to pay homage to the birds on the Niagara.

And it's not just on the U.S. side of the river.

“We are pleased to announce that we now have Canadian organizational partners including Niagara Parks, the Niagara Falls Nature Club, the Bert Miller Nature Club, the Peninsula Field Naturalists and Birds Canada,” announced Jay Burney, event coordinator for Birds on the Niagara. He’s also Jajean’s dad, so it’s a bit of a family affair.

“I got involved with bird-watching at an early age,” Rose-Burney said. “I grew up at nature preserves. My parents took me bird-watching all the time. Buffalo Audubon Society gave me a scholarship to a two-week bird-watching summer camp in southeast Arizona when I was 12. I was hooked. Bird-watching is a wonderful hobby that takes you outside, that gets you to see incredible natural wonders here and around the world, and that makes you part of a community of people that really care about each other.”

His involvement with the natural world became a steppingstone to his job with WNY Land Conservancy as the deputy executive director of the Western New York Land Conservancy, a not-for-profit land trust that protects important wildlife habitat and farmland in the region.

"We try to find ways to connect people with nature, so they can fall in love with it," Rose-Burney said. "I spend a lot of my time talking to people about conservation, leading nature hikes and writing grants.”

And with his background in birds and bird-watching, he was a natural fit to be the keynote speaker to conclude the event Saturday.

“In Western New York, you can see birds that have traveled the world,” Rose-Burney said. “When you see an osprey on a nest at Tifft Nature Preserve in the summer, that bird probably spent its winter eating piranhas on the Orinoco River in Venezuela. When you see a flock of Bonaparte’s Gulls off the shore of the Stella Niagara Preserve (on the lower Niagara River) in the winter, those birds spent their summers nesting in trees in boreal forest in Alaska and Canada. When you see a neon-orange blackburnian warbler at the Beaver Meadow Audubon Center in spring, that bird was passing through the Caribbean rainforests of Puerto Rico only a few weeks earlier.

"The Niagara River and the rest of Western New York are home to some of the most important wildlife habitats in the world. We have to protect this place so that future generations can experience it like we do,” he said.

The festival kicks off from 6 to 8 p.m. Friday with a Valentine’s Day-themed “Birds and Brew” hosted by Buffalo Audubon at Flying Bison Brewery, 840 Seneca St. Buffalo Audubon also will offer Buffalo Outer Harbor birding opportunities from 5 to 6 p.m. prior to the indoor gala. If you are interested in this guided tour, you must preregister by calling 585-457-3228.

On Saturday, there will be plenty of birding opportunities on both sides of the border from 8 a.m. to 2 p.m. For a complete list, go to www.birdsontheniagara.org. One of the highlights will be tours at the Cave of the Winds in Niagara Falls State Park, an excellent location to view birds in the Niagara Gorge next to Niagara Falls. The elevator ride is free for those participating in the festival from 9 a.m. to 2 p.m. Just mention it to the ticket takers.

From 2 to 4 p.m., there will be indoor programs and displays at the New York Power Authority’s Niagara Power Vista, 5777 Lewiston Road, Lewiston (adjacent to Niagara University). The festival will conclude with Rose-Burney’s talk, “Niagara River Birds, Ramsar, and the Niagara River Globally Significant Important Bird Area.”

Niagara’s natural bounty is something to be embraced, and the Birds on the Niagara festival is the perfect starting point to get more involved.

The NFL plans to play the Black national anthem before Week 1 games. Hear the anthem here.

Additionally, the league is working collaboratively with players to recognize victims of systemic racism throughout the season.

Inside the Bills: How Sean McDermott is preparing for a training camp unlike any other

In a normal NFL offseason, players and coaches are enjoying some down time right now. The early part of July is usually the lone quiet time on the calendar. Nothing about this offseason, of course, has been normal or usual.

Bills roundtable: Who will be a surprise cut in training camp?

News' Bills reporters Vic Carucci, Jay Skurski, Mark Gaughan and Jason Wolf will tackle some of the major topics in our series of Bills roundtable.

This award-winning snowy owl shot was captured on the Wilson pier last year. There's a good chance you will see a snowy owl in Buffalo Harbor during the Birds on the Niagara festival. (Photo courtesy Joel Spring)

These Bonaparte's gulls were on a feeding frenzy near Rich Marina, Buffalo. (Photo courtesy Jay Burney)