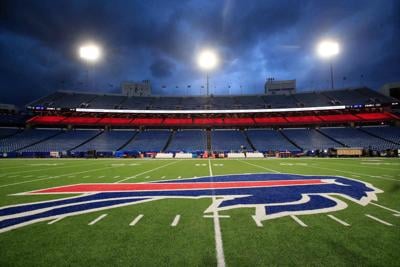 The Buffalo Bills began this season by reaching a franchise milestone before playing a single game.

The Bills sold 60,000 season tickets – spurred by pandemic-related economic conditions and an exciting team – a number they may never touch again because the Bills’ future stadium won’t have enough seats to allow it.

'A lot of devil in the details': What the Bills' deadline means for Orchard Park stadium talks

The negotiations are down to money – or, more specifically, finances plus politics and perceptions and timing.

“We sold out of season tickets for the first time in our team’s history this year,” said Ron Raccuia, the executive vice president of Pegula Sports & Entertainment, during an interview with The Buffalo News. “The stadium seats 69,000, but there’s a cap on season ticket sales, so you always have a fair amount of individual game tickets for fans to buy.”

There are several reasons for the surge.

On the field, the Bills were primed for a Super Bowl run. They returned virtually every starter and coach from a team that reached the AFC championship game last season, including NFL MVP runner-up Josh Allen and All-Pro wide receiver Stefon Diggs, who led the league in catches and receiving yards in 2020.

Off the field, the buying frenzy was fueled by the pent-up demand of fans who were unable to attend home games last season because of the Covid-19 pandemic, which for some may have contributed to extra discretionary income. Many 2020 season ticket holders also allowed the Bills to keep their money and put those funds toward season tickets in 2021, giving the business office a healthy head start to filling seats this season.

None of these factors is sustainable, which is why the Bills plan to reduce the capacity in their new stadium to between 60,000 to 62,000 seats and a general admission, standing-room-only party deck with space for up to another 5,000 fans. Shrinking capacity hasn’t gone over well with some fans. But sports marketing professionals, engineers and economists explained the reasoning behind the national trend in interviews with The News.

“I think that’s smart,” said John Cimperman, a longtime NBA and NHL marketing executive who owns 42 North Brewing Co. in East Aurora. “I know there’s been some negative reaction to the reduced capacity, but it is a trend we’re seeing across venue development – in particular, the reduction of premium seating."

How to build a new stadium that works? A sports marketing exec has answers

John Cimperman emphasized the need for ancillary development around a new stadium, which the team hopes to build in Orchard Park, and the opportunity to build on the Bills as a “national brand.”

Cimperman said a lot of venues include craft beer decks or other communal spaces as younger fans look for social interaction and popular party decks.

Reducing seating capacity does not mean the Bills want to build a smaller stadium.

On the contrary, the team’s stadium proposal is significantly larger than the venue the Bills have called home for nearly 50 years. Highmark Stadium, which opened in 1973, is a little over 900,000 square feet, while the Bills plan to build a new stadium that would be about 1.5 million square feet, Raccuia said.

“The stadium itself doesn’t have to be smaller to be a smaller seating capacity,” said Ryan Starkovich, the sports practice director at Henderson Engineers, which has worked on several new venues, including SoFi Stadium in Inglewood, Calif., which opened in 2020.

Starkovich compared SoFi, the $5 billion home of the Los Angeles Rams and Chargers, to AT&T Stadium, the Dallas Cowboys’ venue in Arlington, Texas, that opened in 2009.

Both can be reconfigured to seat more than 100,000 spectators.

“SoFi is a larger facility, but it just seats less,” Starkovich said. “It’s about the fan experience and how you move through the space.”

SoFi will host Super Bowl LVI in February and serve as the centerpiece for the 2028 Summer Olympics.

“It seats the exact same number that Highmark does right now,” Raccuia said. “It’s really unrealistic to think that a market like L.A., hosting those types of events, and a market like Buffalo could have the same capacity.”

“Usually, a main motivating factor for a new stadium is to vastly increase the space devoted to concessions,” Noll said. “Some of them include hotels and video arcades and all kinds of stuff, besides just selling beer and hot dogs.”

Raccuia said the Bills’ new stadium would use the additional square footage to incorporate food preparation and maintenance facilities – these are located outside of Highmark Stadium – and to create more temperature-controlled areas and significantly wider concourses. Bills fans can also expect better wireless internet access, bigger monitors and multiple video boards to better compete with their viewing experience at home, as well as increased comfort.

The Bills plan to keep a similar seating bowl in a new stadium, but with larger seats, more legroom and wider aisles, which would reduce capacity.

“We’re going to do everything we can to keep the same type of bowl, with great sightlines to feel like you’re right on top of the field,” Raccuia said. “But we have to create the other spaces in a bigger way.”

The Bills expect to sell about 50,000 season tickets at a new stadium, which would require the purchase of personal seat licenses, which would cost, at a minimum, about $1,000 apiece, The News reported in September. The average ticket price would increase because of inflation and added options, Raccuia said.

Sports economist Andrew Zimbalist of Smith College in Massachusetts said the stadium’s reduced capacity could lead to fewer empty seats on game days and increased ticket prices, as well, based on simple supply and demand.

“It’s always in the team’s interest to generate a psychology that it’s special to be at the ballgame,” Zimbalist said. “And if they put the game on television and it’s not sold out, then the whole idea, this mystique of – ‘Gee, hey, lucky me. I’ve got a ticket to the Bills game this weekend!’ – that starts to go away.”

Raccuia said the Bills are seeking a new stadium because the current facility has structural deficiencies and is not worth renovating – not to increase revenue.

While teams often reduce seating capacity in the upper deck and end zones because the cheapest seats provide the lowest return on investment, the Bills also plan to cut about 1,000 of their most expensive seats by reducing the number of suites by about 45%, Raccuia said.

The new venue, which has not been designed, would have roughly 60 suites, compared to 110 at Highmark Stadium.

Raccuia said the mix of ticket options in the new stadium would “change dramatically” from what the Bills offer today: 100-level seats, 300-level seats, 200-level clubs and suites.

“In essence, we really only have four different products,” Raccuia said. “In a new stadium, we could have upwards of a dozen or more different products to fit every fan, from the standing-room-only party deck scenario to a 24- or a 36-person suite. That gives you flexibility, in a new stadium, to create those options that really give the fan anything that they could want to fit their price point.”

Raccuia, in an interview with The News, said the Bills had “never even come close” to selling 60,000 season tickets before this season, although it’s happened once before.

A sellout at Highmark Stadium does not mean the building is filled to capacity, Raccuia said, because of returns, no-shows and other reasons. He said a sellout translates into a crowd in the mid-60,000 range.

A financial impact report commissioned by the Bills, which was included among the documents made public last week by New York State, included a breakdown comparing average paid attendance and turnstile attendance from 2015 to 2019. Paid attendance was 64,070 per game, while turnstile was 55,454. That’s for a 10-game season, which means preseason games may slightly suppress the numbers.

The Bills’ average paid attendance this season through eight regular season home games is 68,196, which ranks 14th out of 32 teams, according to ESPN data. It also amounts to 95.2% of stadium capacity, which ranks 20th in the league.

That’s after selling all of their season tickets.

“Reducing capacity is not a product of struggling to fill the stadium when the team is as successful as we are now,” Raccuia said, “but historically it has been a problem struggling to fill, especially later in the season when the weather turns on the games. If you look at our ticket sales, even opening day, there was an amazing crowd, filled to the rafters. We still only had 65,000 people in the house.”

CORRECTION: An earlier version of this story incorrectly cited 60,000 as the record for Buffalo Bills season ticket sales, based on information provided by Pegula Sports & Entertainment. The team clarified Saturday morning that the record is 60,102 season tickets sold, set in 2015. This story has been updated to reflect the change.

Opinion: Sean Payton's last season with the Saints was a success

Opinion: Sean Payton's last season with the Saints was a success

24 years later, Jamaica's four-man bobsleigh team is back at the Winter Olympics

24 years later, Jamaica's four-man bobsleigh team is back at the Winter Olympics

New York State's economic development agency on Thursday made public portions of four documents that were part of a study commissioned by the Buffalo Bills on possible sites for a new stadium.

The governor also said she believes, as she has stated in the past, that the state, the Bills and Erie County can reach an agreement on where to build a stadium and how to pay for it by the end of the year.

Your guide to Buffalo Bills vs. New York Jets

The Bills are looking to become AFC East champions for the second year in a row with a win over the Jets today in Highmark Stadium. Get caught…