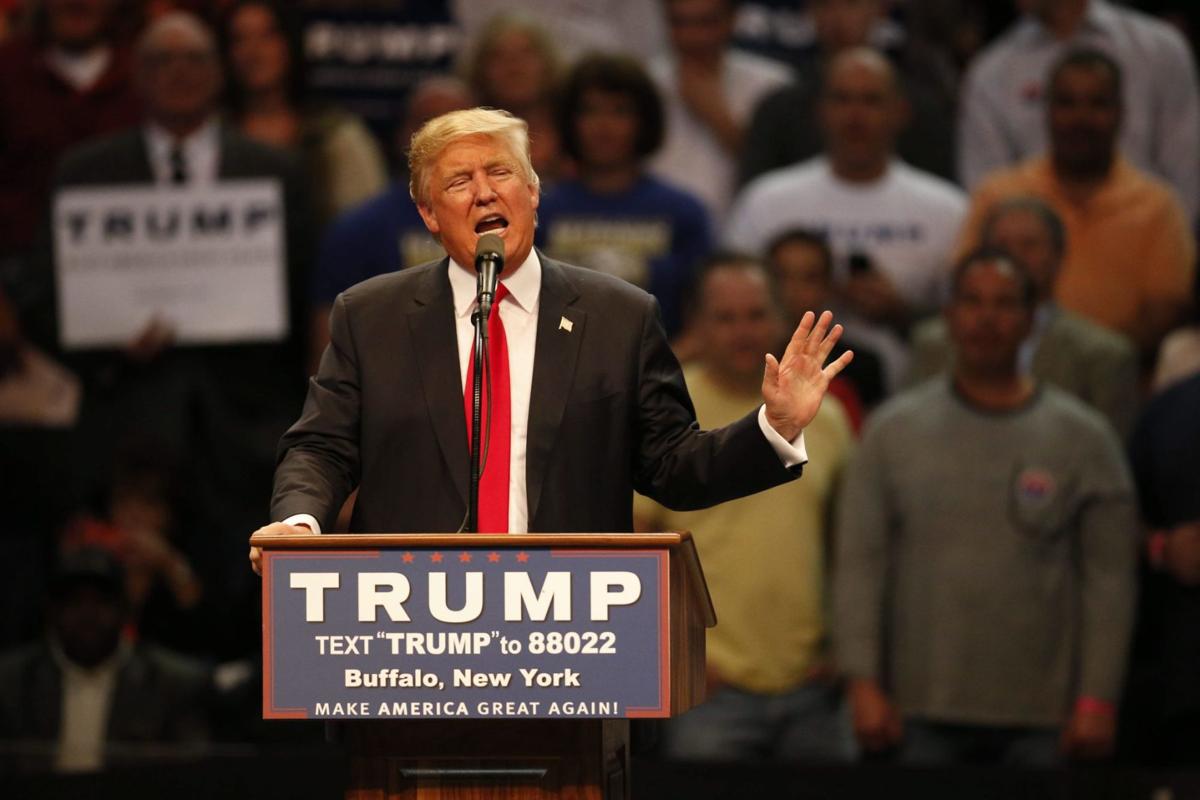 Donald Trump speaks during a rally at then-First Niagara Center in Buffalo as he campaigned in April 2016. (Derek Gee/News file 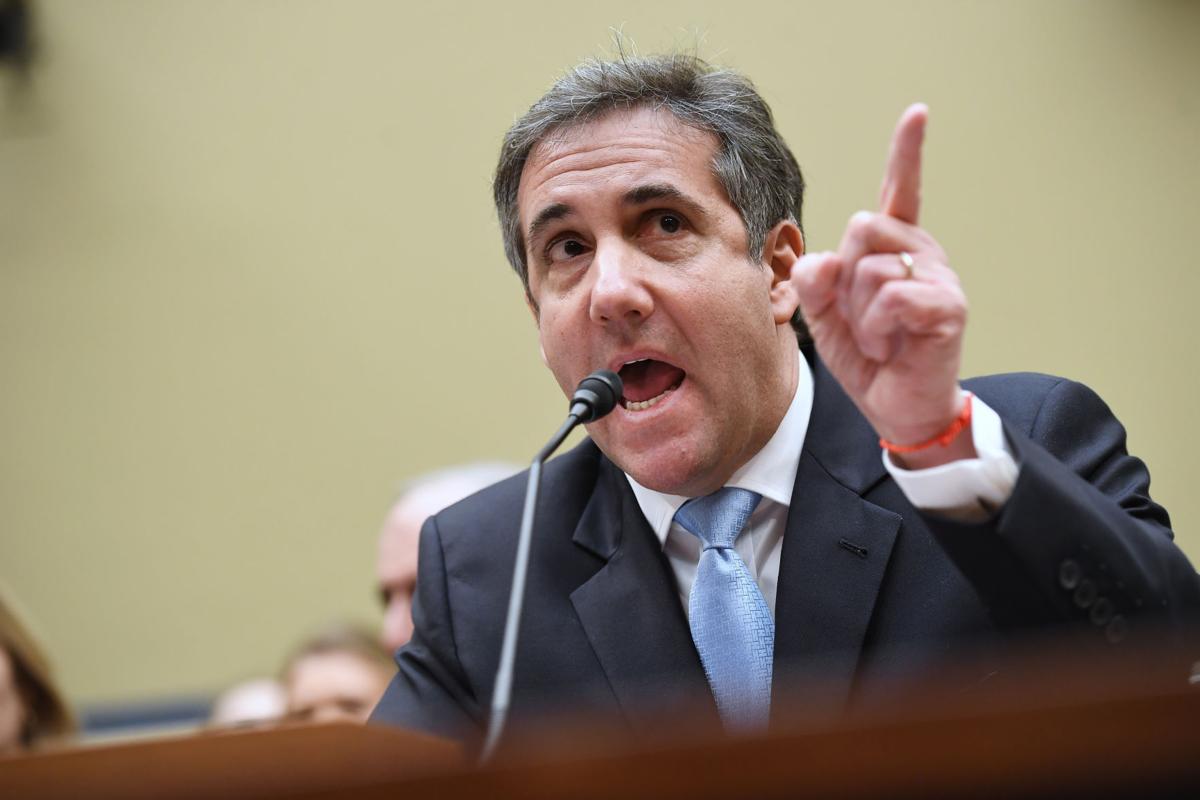 WASHINGTON – To hear Michael Cohen tell it, Donald Trump inflated or deflated his own net worth depending on what was best for him at the time.

And according to financial documents Trump's former lawyer filed with Congress on Wednesday, the New York developer – now the president of the United States – inflated his net worth to the tune of $4 billion while bidding to buy the Buffalo Bills in 2014.

But Cohen's testimony on Trump's failed bid for the Bills stood out anyway – because they hinted that Trump might have broken the law.

Lying to a financial institution to get a loan constitutes bank fraud. In discussing Trump's attempts to get a loan from Deutsche Bank to finance his purchase of the Bills, Cohen came close to accusing Trump of just that.

"Mr. Trump is a cheat," Cohen told the House Oversight and Reform Committee, later adding: "It was my experience that Mr. Trump inflated his total assets when it served his purposes, such as trying to be listed among the wealthiest people in Forbes, and deflated his assets to reduce his real estate taxes."

To prove his point, Cohen gave the committee Trump's financial statements from 2011-2013, which the billionaire developer submitted to Deutsche Bank in his 2014 attempt to get a loan to buy the Bills.

Those figures stoked the curiosity of Rep. William Lacy Clay, a Missouri Democrat.

"Inflating assets to win a newspaper poll to boost your ego is not a crime but to your knowledge, did the president ever provide inflated assets to a bank in order to help him obtain a loan?" Clay asked at the hearing.

Cohen's response: "These documents and others were provided to Deutsche Bank on one occasion in which I was with him in our attempt to obtain money so that we can put a bid on the Buffalo Bills."

By no means was that the only time Trump provided inaccurate information regarding his finances, he said. In response to a question from Rep. Alexandria Ocasio-Cortez, a Bronx Democrat, Cohen said Trump also inflated his net worth in filings to insurance companies.

Ocasio-Cortez then asked if Congress could find documentation of that in Trump's tax returns – which the president has refused to release but that House Democrats could subpoena.

"You'll find it at the Trump Organization," the president's company, Cohen replied.

Neither the White House nor the Trump Organization replied to emailed questions about the sudden leap in Trump's net worth during his pursuit of the Bills, which ended when the NFL approved the sale of the team to Terry and Kim Pegula in September 2014.

But if what Cohen said is true – if Trump did inflate his net worth in documents filed with Deutsche Bank – it might make the president's legal troubles worse.

That's because the U.S. criminal code defines bank fraud as, in part, obtaining help from a financial institution "by means of false or fraudulent pretenses, representations, or promises." While many legal experts doubt whether a president can be indicted, the criminal code sets the punishment for bank fraud as a fine of up to $1 million, or a prison sentence of up to 30 years, or both.

The appearance of an extra $4 billion in "brand value" on Trump's balance sheet raises questions, said Michael J. Dambra, an assistant professor of accounting and law at the University at Buffalo's School of Management.

By brand value, Trump appears to be referring to the net worth he generates by licensing his name to various products.

"But usually, you're going to see brand value incorporated into the value of the business," not separated out into an additional line item that suddenly appears on a financial report, Dambra said.

What's more, Dambra noted that a lot of Trump-branded products have disappeared over time. The Washington Post reported last year that of 19 Trump-branded products that the developer identified in 2015, only two – Trump furniture and a line of Trump home goods – remained. Trump steaks, Trump deodorant and Trump underwear all went the way of Trump University: They all disappeared.

That being the case, "I'd be hard-pressed to believe those products were ever worth $4 billion," Dambra said.

Even Rep. Tom Reed, a Corning Republican who's usually a Trump supporter, expressed skepticism over the appearance of $4 billion in Trump brand value just before he attempted to buy the Bills.

"I could see a legitimate question being raised in regards to where that value comes from," Reed said.

Reed added, though, that many brands have a history of being difficult to value accurately.

Cohen made his comments on Trump's effort to buy the Bills at one of the most highly anticipated congressional hearings in years.

Cohen is set to begin a three-year prison sentence on May 6.

In response to his testimony, Trump tried to use Cohen's guilty plea against him.

"Michael Cohen was one of many lawyers who represented me (unfortunately)," the president tweeted Wednesday morning. "He had other clients also. He was just disbarred by the State Supreme Court for lying & fraud. He did bad things unrelated to Trump. He is lying in order to reduce his prison time."

Michael Cohen was one of many lawyers who represented me (unfortunately). He had other clients also. He was just disbarred by the State Supreme Court for lying & fraud. He did bad things unrelated to Trump. He is lying in order to reduce his prison time. Using Crooked’s lawyer!

The relationship between Cohen and Trump is far different today than it was five years ago, when Cohen served as Trump's main spokesman in his effort to buy the Bills.

"The Bills have a rich history in Western New York, and Mr. Trump's interest is to preserve that," Cohen told The Buffalo News in April 2014.

At the time, Cohen gave no hint of what he told Congress on Wednesday: that his former boss played fast and loose with numbers specifying his own net worth.

On the contrary, as Trump ramped up his bid to buy the Bills in April 2014, Cohen told The News: "Mr. Trump's wealth is far greater than what has been reported."

Will Carson Wentz be ready for Tennessee (-5.5)?

What is the NFL thinking with a wild card schedule change?

What is the NFL thinking with a wild card schedule change?

Plenty of theories have been floated about Bills quarterback Josh Allen's performance through the first two weeks, and former WFT tight end Logan Laulsen a hot take that might be better than much of what's been said.

A.J. Epenesa had the best game of his Bills career. He had three hits on the quarterback, including the one that knocked Tua Tagovailoa out of the game, and three other pressures.

Donald Trump speaks during a rally at then-First Niagara Center in Buffalo as he campaigned in April 2016. (Derek Gee/News file