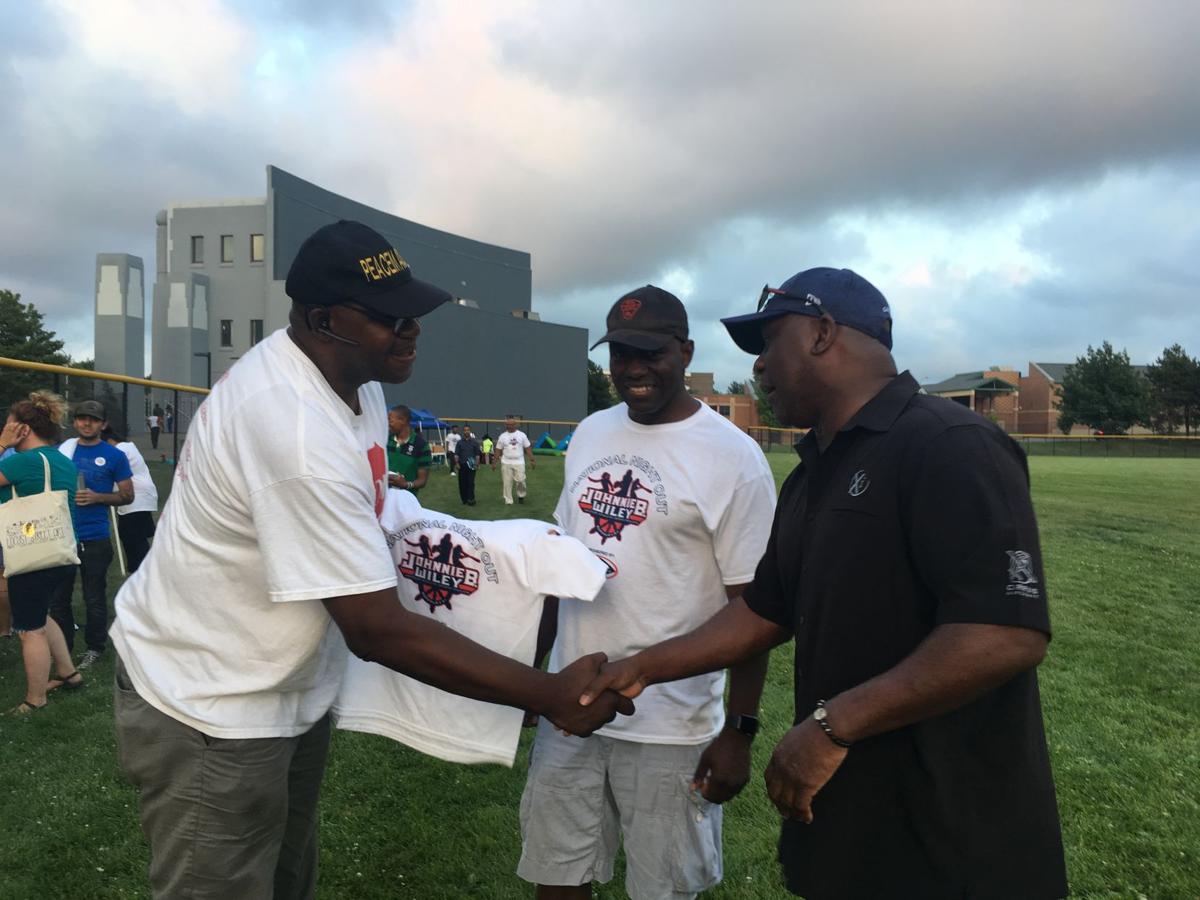 Longtime anti-violence activist Murray Holman reaches out to shake the hand of Thurman Thomas, Buffalo businessman and football Hall of Famer, as Buffalo police detective Cedric Holloway looks on during a gathering at national Night Out in Buffalo. (Sean Kirst/The Buffalo News) 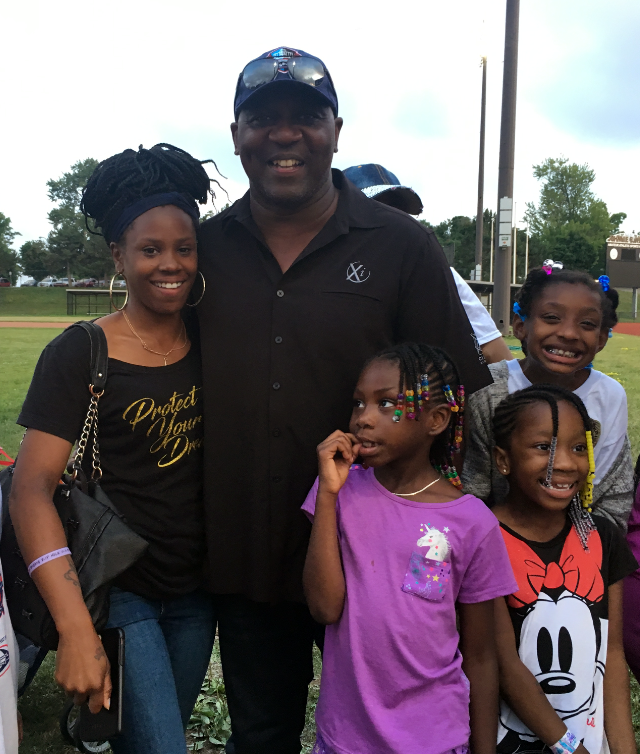 Thurman Thomas last week, with some of the neighbors at the national Night Out on Buffalo's East Side. (Sean Kirst/The Buffalo News)

Cedric Holloway has been around for a long time as a police detective sergeant in Buffalo. During 32 years with the department, he has seen too many instances of grief. To sleep at night, he learned to push those tragedies into the back of his mind, once an investigation was over.

Yet Holloway does not want to move past his first reaction to a story he heard last month, after police responded to an incident on Grape Street. A grandmother, Yvette Johnson, and her 17-month-old grandson, Kyrie Johnson, were shot to death on a front porch. Six weeks later, their killers have not been caught.

Holloway, founder of the Omega Mentoring Program, talked with colleagues involved with the case. "The way they described the scene," he said, "that little child on the ground, that physical description, you just can’t get it out of your head."

He feels for anyone who witnessed such a thing, for the family and all those who responded. The horror of it caused him to make a resolution:

This time, he does not want that image to fade away.

On the East Side, in the city, in the regional community, Holloway believes the idea of Kyrie and his grandmother, shot and killed, should burn at us all. Almost everyone has seen the way a 17-month-old faces the world – the feeling of a tired head falling onto a parent’s shoulder, the small hand lifted in wonder at a bird or a butterfly, the soft motion of breath from a sleeping toddler, wrapped in blankets in a crib.

The anguish of such a killing, Holloway said, ought to be a screaming threshold for a city where lethal violence is all too commonplace. It should be a reason for people who can identify the killers to come forward, and it ought to reinforce a larger commitment to protecting and nurturing our children.

"Taboo," Holloway said. "This is against the rules."

He keeps thinking about how he can sustain that passion, about people whose help he can seek out in response.

A first step was last week’s National Night Out at the Johnnie B. Wiley Amateur Athletics Sports Pavilion, an East Side complex named for Holloway's father. While the idea was strengthening the bridge between neighborhoods and the police, Holloway wanted to make an even more fundamental point: It was possible for the community to come together, without fear.

Among the many women and men Holloway asked to attend — including politicians, activists, prosecutors, educators and, above all else, neighborhood residents — was Thurman Thomas, an old friend who brought the power of his National Football League fame to Holloway’s effort.

Yet Thomas, 52, hardly saw his role as a function of celebrity.

"A 17-month-old child," Thomas said last week at the Wiley Pavilion, a network of offices and athletic fields built on the bones of the old War Memorial Stadium. He recalled how his own reaction was similar to Holloway's, the same gut emptiness upon learning a little boy died in such a way.

Voice rising in passion, Thomas spoke of a Houston childhood in which he could sometimes hear gunshots at night, while lying in his bed. What protected him, he said, was the embrace of his parents, his extended family and the community around him.

His mother worked at night at the post office. His stepfather drove a tractor-trailer for UPS, while his father drove a Greyhound. Somehow, they always made sure there was a way for him to get to school. He had older friends who did their best to guarantee he was not alone as he walked home, after practice.

Of little Kyrie, Thomas wondered: What might he have become? How could such pointless rage take away his first day of kindergarten and all the quiet milestones that are the right of every child? As Micah Harris, assistant director of the Omega program, put it beautifully, speaking of hunger, of cancer, of grief on the streets: "Maybe we just killed the person who would have found a cure."

To Holloway, thinking of the East Side, any healing now demands full memory of the child.

He and Thomas are the same age. They have known each other since the '90s, when Thomas was a Buffalo Bills running back and Holloway was a young police officer. They crossed paths at the time through mutual friends on the East Side, the heart of the city's African-American community.

The connection grew as their roles evolved. Holloway is a veteran detective whose mentoring program tries to help young people at risk. Thomas is president of the 34 Group, a Buffalo-based company that handles construction and project management.

He and his wife, Patti, have also started the Thurman Thomas Family Foundation, whose mission involves an emphasis on children raised in struggle.

In that way, Thomas and Holloway shared a purpose as they casually walked side-by-side across the Wiley athletic fields, on the site where the Bills used to play not quite 50 years ago. From time to time, they would turn their heads and look beyond a fence, toward the street where Kyrie and his grandmother were killed.

"We can’t let this fizzle out," said Murray Holman, executive director of the Stop the Violence Coalition and a childhood friend of Holloway’s, who welcomed Thomas with a grateful handshake. The danger, Holman and Micah Harris both said, is that the bloodshed cascades to a point where the entire community becomes desensitized, where even a child's death is reduced to a percentage.

"Every life deserves honor," Harris said, a thought that also covers all the young people he mentors.

Thomas speaks of Buffalo as his home, as "my city," and he said that belief brought him last week to the East Side. He said for professional athletes, amid a summer of such pain, "it’s your duty to be seen and to be heard."

At the pavilion, where the atmosphere was intended to feel like a sprawling picnic, the original plan was for Thomas to give a speech. He and Holloway chose against it.

Better on this evening, they decided, to just wander the field. Thomas hugged grandmothers who cried out in joy when they saw him. He crouched down to speak with 6-year-olds who sensed – simply from the demeanor of the adults surrounding them — that this was a man of importance, someone who mattered.

As Thomas listened to their stories, so did they. That was the point.

Many civic officials showed up throughout the evening, including Mayor Byron Brown and district attorney John J. Flynn. The district attorney said the shootings are almost certainly part of larger strife between street gangs, which intertwines with layers of fear that make it hard to identify the suspects. Investigators worry, Flynn said, that older men may be sending younger ones to do the killing.

The theory would explain a level of mayhem so horrific that Flynn said even veteran prosecutors in his office were shaken. It left Lakendra Tillmon, a young mother, shot to death in front of three of her children on Butler Avenue. It resulted in the killing of Yvette Johnson and little Kyrie, on a front porch.

Those killings are so raw, Flynn said, that many people seem to be saying "enough is enough." He said police are receiving more and more offers of help from neighborhoods sick with grief over such bitter losses.

As for Thomas, he stayed at the Night Out a long time, until the evening sun began to drop. At the end, he and Holloway walked together toward the parking lot, deep in conversation. A child, maybe 10 years old, spotted them and asked if Thomas was the guy who used to play in the NFL.

When a bemused Thomas confirmed it, the 10-year-old said, "Want to race?" Before Holloway fully realized what was happening, the child was flying down the promenade with a 52-year-old Hall of Famer sprinting after him. It was a classic scene, a great moment for any kid, but not because Thomas was a football star.

He was a guy who knew the way, hoping to share a destination.

Longtime anti-violence activist Murray Holman reaches out to shake the hand of Thurman Thomas, Buffalo businessman and football Hall of Famer, as Buffalo police detective Cedric Holloway looks on during a gathering at national Night Out in Buffalo. (Sean Kirst/The Buffalo News)

Thurman Thomas last week, with some of the neighbors at the national Night Out on Buffalo's East Side. (Sean Kirst/The Buffalo News)