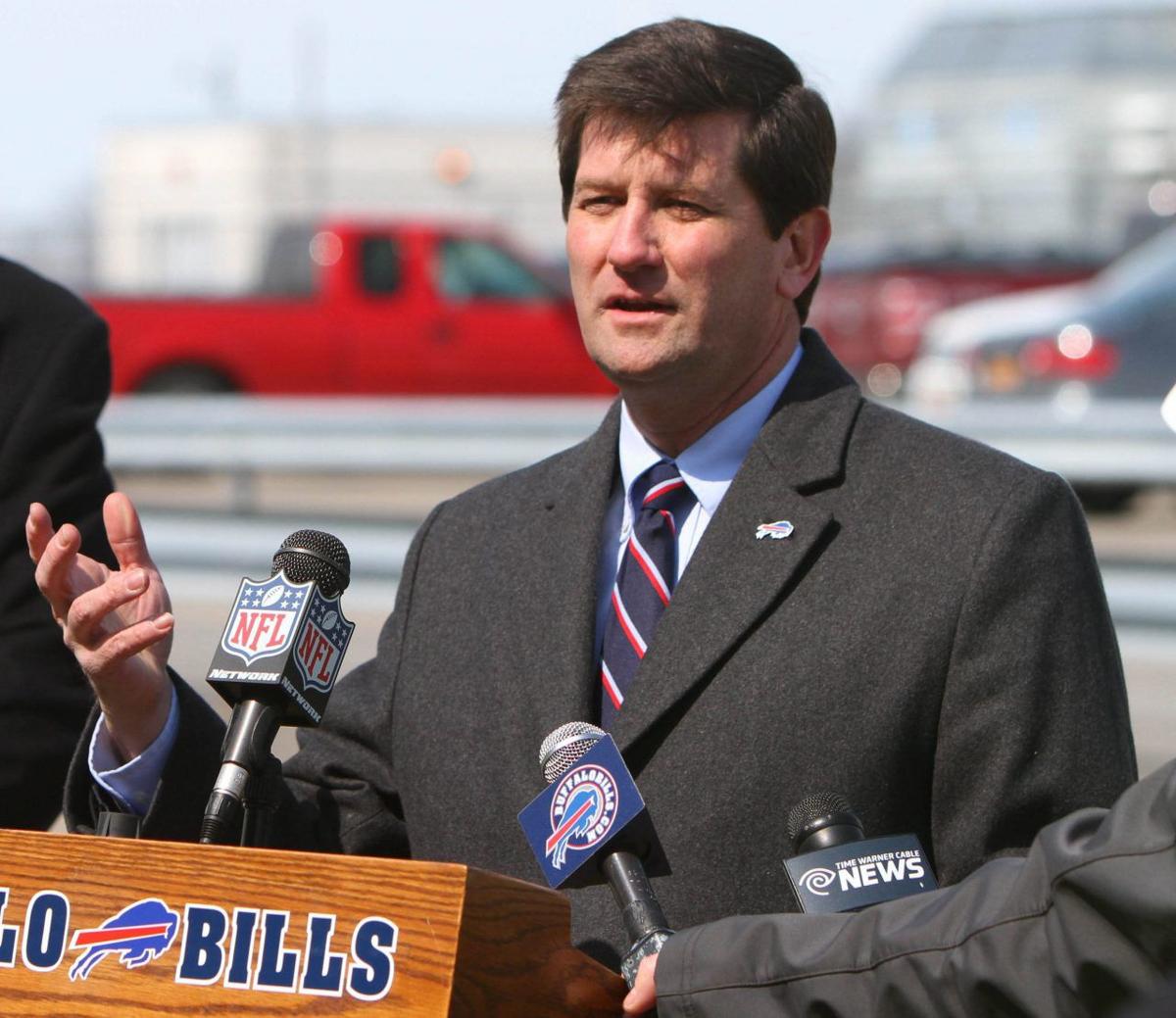 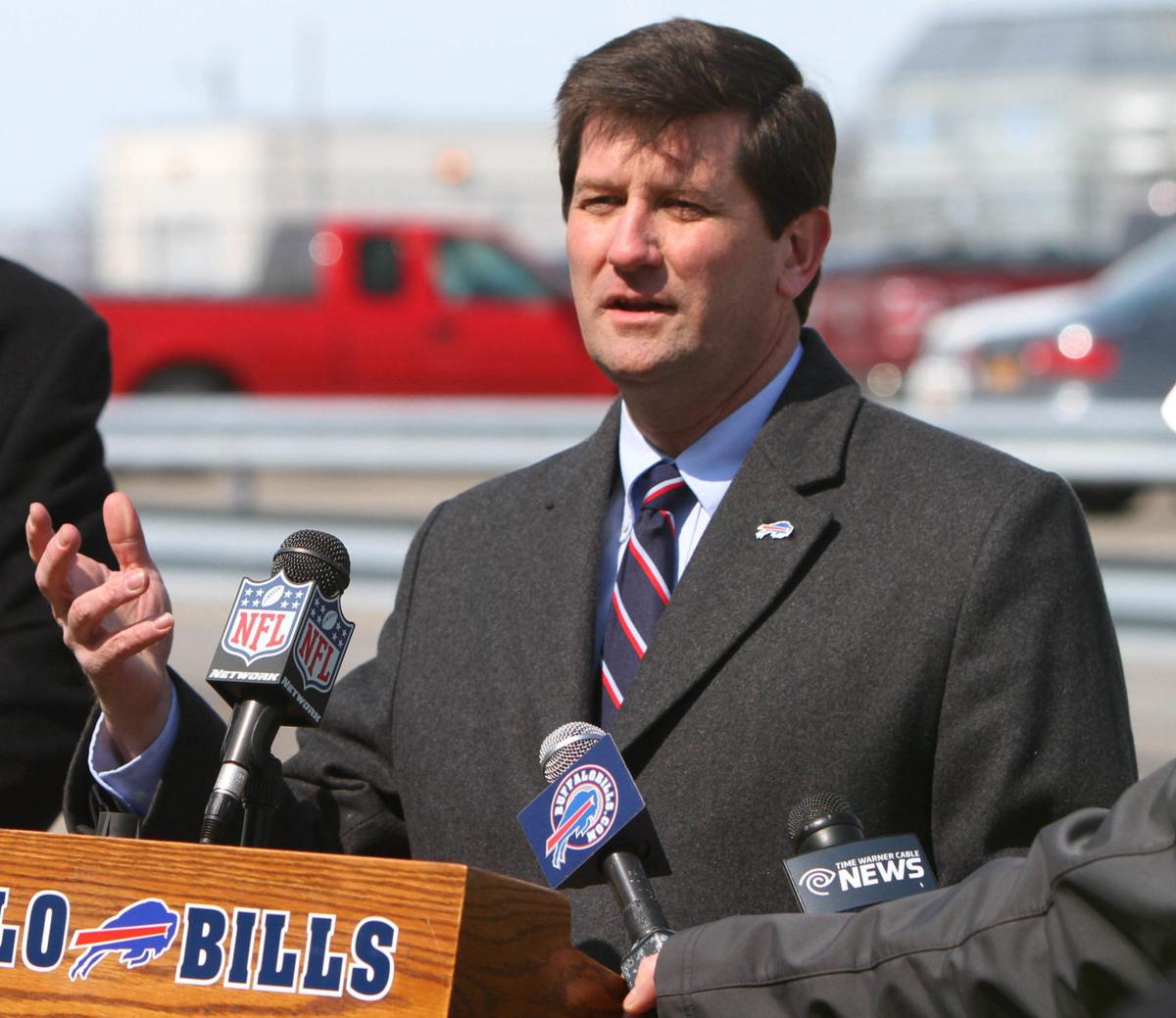 ALBANY – A serious concern was starting to show.

On March 15, 2012, in the second set of formal negotiations with New York State and Erie County, the Buffalo Bills presented a list of 36 separate projects they wanted – costing $210 million – at their stadium as part of any deal to sign a new stadium lease to keep the team in Western New York.

But the Cuomo administration was showing no signs of engaging yet.

The governor had dispatched two state officials – including Sam Hoyt, his point person in the Buffalo area – to the talks, but gave them no authority to negotiate.

Without that engagement, “not much could be accomplished," wrote Erie County Executive Mark C. Poloncarz in a new book titled “Beyond the Xs and Os: Keeping the Bills in Buffalo.’’

“I was starting to get a bit impatient with the state’s inaction. I could only imagine what the Bills were thinking at that point, and from the looks on their faces, it was not good," wrote Poloncarz, a Democrat whose book is being published as he runs for another four-year term as county executive this fall.

RELATED: Highlights from "Beyond the Xs and Os: Keeping the Bills in Buffalo"

The book offers an inside look – albeit from one perspective – of the talks in 2012 and 2013 that led to the signing of a 10-year lease by the team for the county-owned stadium, along with tens of millions of dollars in public funds to keep the team from moving.

The book includes a range of insights Poloncarz took away from the discussions — via correspondence and recollections aided by Poloncarz's note-taking – and several highlights emerge:

• The slow entry of the state into negotiations troubled both the Bills and the county. Given that owner Ralph Wilson was in his 90s, the county feared Wilson would die before the agreement could be completed, leaving the team vulnerable to a new owner who wanted to move the team from Buffalo. Fortunately, Poloncarz said, the state got its act together and played a critical role.

• Gaining a non-relocation agreement, which included a $400 million penalty "bomb" if the team were to move, was a sticking point. Instead of that agreement, the team wanted lease language in which the Bills promised to reimburse the state and county stadium for renovation costs if the team moved. Poloncarz said that meant the Bills anticipated the likelihood that the team would move after Wilson's death. That's part of the reason the Bills didn't seek a huge sum for stadium renovations or a new stadium, he said.

• Even after the announcement in December 2012 in which all parties signed a memorandum of understanding to all key elements of the deal, it took three more months of difficult negotiations before all parties were ready to sign a final agreement. "After the MOU, it pretty much fell apart," Poloncarz told The Buffalo News. "We had to get everybody back together."

In the first half of the 205-page book, Poloncarz sprinkles his 2012 experience with a sense of anxiety about the state’s commitment to the negotiating process.

At the end of May, the state still had only two Empire State Development officials with no negotiating authority, Hoyt and Steve Gawlik, representing the Cuomo administration, much to the growing aggravation of the Bills leadership team.

Poloncarz was getting desperate. He reached out to Joseph Percoco, Cuomo’s gatekeeper at the time – who has since gone to prison on corruption charges related to the Buffalo Billion. He made it clear that “if any party was accused of dropping the ball on the talks, it was the state." Percoco confirmed that some top Cuomo advisers didn’t see the rush because the Bills’ lease still had a year left on it, Poloncarz wrote.

In the ways of Albany, where nothing major gets resolved without an imminent deadline nearing, such an approach was hardly surprising. Cuomo, in office just over a year at that point, had already learned the advantages of wait-until-the-timing-is-just-right kind of negotiations.

Also, there was a state budget to get done in March and the end-of-session flurry that June – although it was one of the more ho-hum sessions in Albany this past decade.

Meanwhile, the Bills were presenting mounting demands by the end of June. Besides construction dollars for work at the stadium, the team wanted the state and county to increase by 37% the $10.1 million in annual payments to the team under the expiring 1998 lease.

On Aug. 8, Schumer hailed a new effort on his part to keep the team in Buffalo. Schumer and Cuomo are not especially close, but they have shared something in common: a desire to compete with one another for the spotlight in New York State.

The news conference, by Poloncarz’s account, was a flop, as Schumer found himself unable to answer many questions from hungry reporters about the status of the lease talks. But it served as a wake-up call to Cuomo. The next day, Cuomo had his own announcement: The state was hiring Irwin Raij, a top sports attorney, to help represent the state in the talks.

Hoyt, in an interview last week, recognized that the state's slow entry into negotiations was frustrating.

"But that was my role," he said, "to make sure the state was represented at the table and report back to the folks in Albany. And ultimately, when it reached the stage where it required somebody at the Albany level to participate, they did."

He also said Cuomo stayed informed and engaged throughout the process.

“I hope the governor is very proud of the role he played in keeping the Bills in Buffalo, because it wasn’t a given," Hoyt said.

Jason Conwall, a Cuomo spokesman, said keeping the Bills in Buffalo "always will be a top priority for this administration.'' He said the administration understands "what the team and organization mean to the community, and during the lease extension we provided the financial support necessary to ensure they won't be going anywhere.''

When the Cuomo administration did jump into the talks, it did so mightily, Poloncarz wrote. Lt. Gov. Robert Duffy, a lifelong Bills fan, played a role, and Howard Glaser, the state operations director who was one of Cuomo's most trusted advisers, ultimately had an even bigger role in getting a final deal done.

The News in September 2012 reported of a meeting in New York City between state and county negotiators. Cuomo spoke twice with Bills Chief Financial Officer Jeff Littmann within 24 hours. Publicly, the rhetoric had been icy. The state’s sincerity was questioned at one point in a Sept. 12 Buffalo News article that blamed the Cuomo administration for delays in the talks.

That was followed up by a new frustration felt by the state, officials later told The News, after state negotiators were informed in closed-door talks that the football team would be worth more money if located in Los Angeles or Toronto. “We’re not there on the commitment and taxpayer protection, in my opinion," Cuomo said in one of the rare comments on the secret talks.

In a meeting between the county and state in a conference room at John F. Kennedy Airport, Cuomo aides dropped a bombshell, according to Poloncarz. The state had no interest in negotiating a one-year, temporary extension to the lease – one of the ideas being pitched by the Bills – but instead wanted a 15-year lease if tied to a major renovation of the stadium. Moreover, deputy county executive and key county negotiator Richard Tobe told Poloncarz that what the state really wanted was a 30-year lease tied to a new stadium in downtown Buffalo.

“They want a what?” a stunned-sounding Poloncarz recalls responding.

That idea faded within a couple of days, Poloncarz wrote, when two things became clear to the Cuomo administration: The Bills had no interest in a new stadium, and the county had already determined that a new stadium in downtown would not work for a host of financial and logistical reasons.

Cuomo wanted a deal before the last Bills home game of the season in December, Poloncarz said. For a while, lawyers took over the talks and made progress until it became clear that higher-level players had to once again step in.

In the end, a deal was announced Dec. 21 in Buffalo, with Cuomo – his airplane grounded due to high winds – beaming his remarks via satellite. The final terms, though, still were not signed until the following April.

What the state and county discussed back then has real-life, fiscal implications every year in Albany. Consider page 1,113 of what’s called the Aid to Localities bill, which is one component of the thousands of bills that made up this year’s state budget passed on April 1. Buried deep in that bill is this line: “For services and expenses of contractual payments related to the retention of professional football in Western New York.” The line item allotment: $4,605,000.

Poloncarz wrote that he expressed repeatedly to state officials that the county could not afford the bump in payments – especially with the state-imposed tax cap on all municipalities.

In the end, the county agreed to a 10-year lease agreement in which the state initially paid for 57% of the state/county share, a percentage that would decline every year for seven years. This year, the state will contribute 51 percent toward stadium maintenance. Starting in 2020, the state and county will evenly split the public share of stadium maintenance costs.

The book goes into detail on one of the the most difficult legal sticking points: how to get the Bills to agree – at a time when their elderly team owner was having health issues – on a provision barring or heavily fining the team if it moved to another city.

The scene was the Millennium Hotel in Cheektowaga on Oct. 2, 2012. When Glaser, the key state negotiator, dropped the $400 million relocation "bomb" on Littman, the Bills CFO, "Jeff was shocked and angry," Poloncarz wrote.

Poloncarz said the state and county made it clear they weren't trying to punish Wilson or the team. The community just needed protection in the event of Wilson's death.

Ultimately, because of Wilson's commitment to keeping the team in Buffalo during his lifetime, Bills negotiators who were initially resistant to a separate non-relocation agreement ultimately agreed to one: If the team moved, the owner would have to shell out $400 million. Poloncarz said then-Bills President Russ Brandon told him that penalty ultimately kept many prospective owners – Poloncarz knew of about 10 – from placing bids on the Bills when Wilson died in March 2014.

Despite the difficult budget year ahead, Erie County Attorney Michael Siragusa said the costs associated with the stadium lease deal are unavoidable.