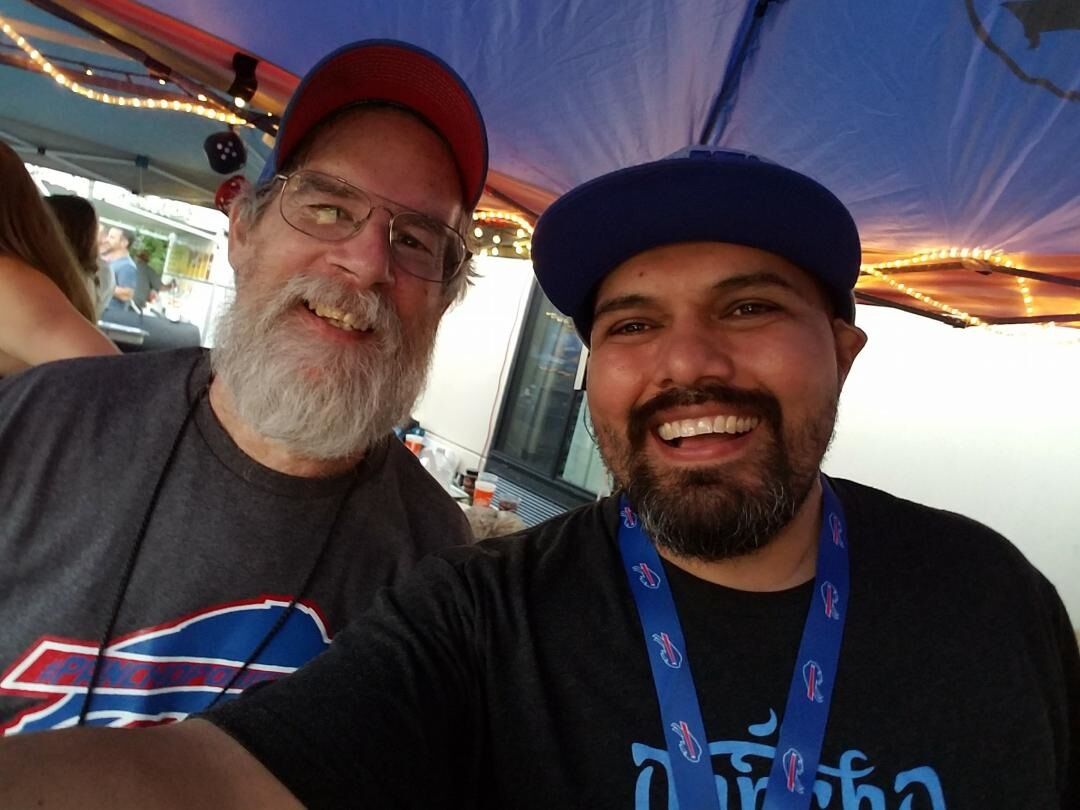 "Pinto Ron," whose real name is Ken Johnson, with his close friend, the late Ezra Castro. While Castro earned fame as the costumed Pancho Billa, Johnson sees him first without the mask. (Image courtesy of Ken Johnson) 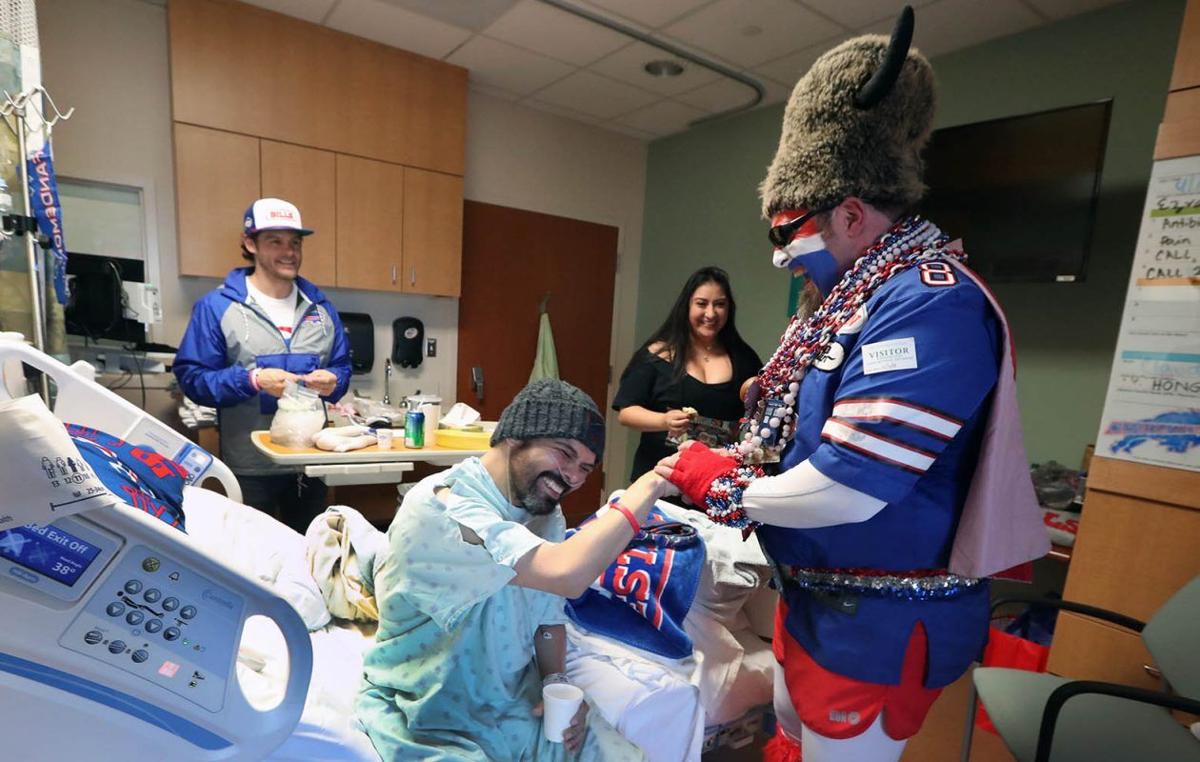 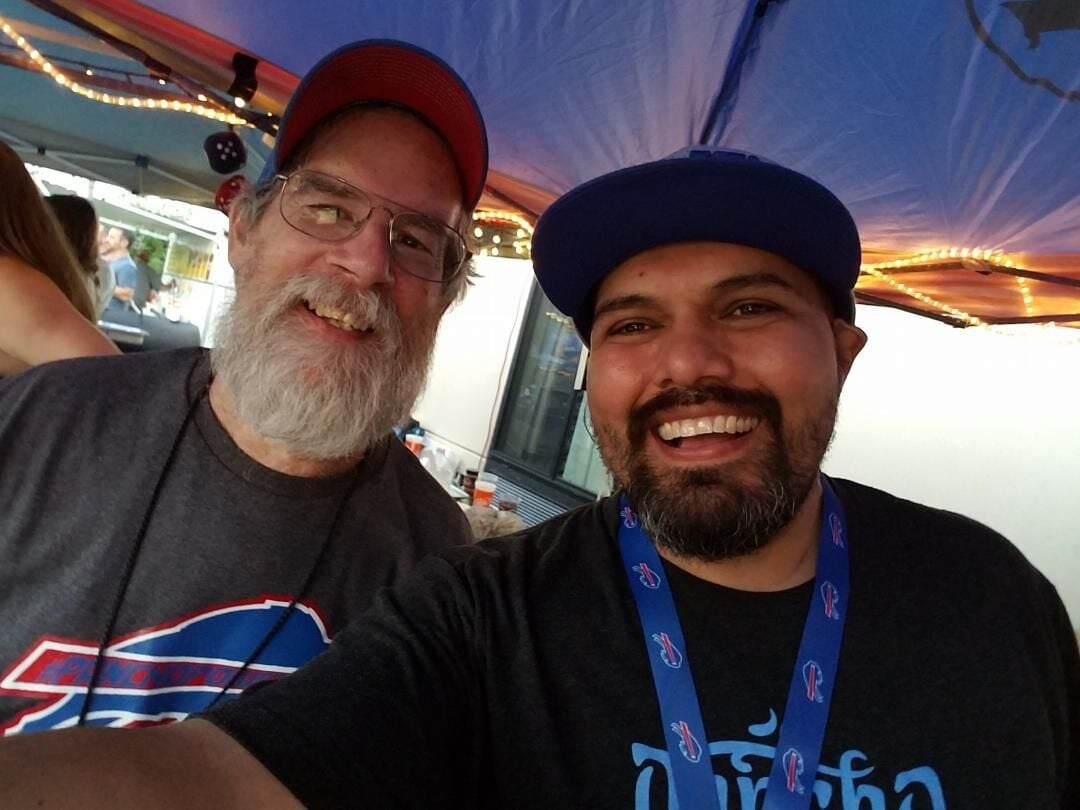 Ken Johnson, known far better as “Pinto Ron” around greater Buffalo, vividly remembers meeting Ezra Castro. It is important to read that sentence exactly as written, because Castro is being eulogized throughout the football world as Pancho Billa, the mask-and-sombrero wearing character he made famous in the stands at Buffalo Bills games.

They were introduced in the crowd at Canton in 2009, where then-Bills owner Ralph Wilson and defensive legend Bruce Smith were about to enter the Pro Football Hall of Fame and the Bills faithful arrived in strength. Castro, at that moment, wore no costume.

To Johnson, from the moment he shook Castro’s hand until last week — when he said goodbye to him in a Dallas hospital — his friend was Ezra before all else.

“There were times,” Johnson said, speaking of big gatherings on the evenings before games, “when I had to coax him to put the costume on.”

He thinks that self-effacing sincerity is a major part of why an entire region mourns. Somehow, in the way Castro kept faith with this city and its team through his hard days and his worst trials, he reaffirmed the value in what makes us what we are.

Castro, 39, died Tuesday morning in Dallas, about 18 months after he learned he had a tumor wrapped around his spine. He was a most unlikely Bills fan, a Dallas mortician who embraced the team as a child because the colors reminded him a little of the Mexican flag.

I called Johnson for a simple reason. He and fellow members of the passionate nationwide network known as the #BillsMafia – notably including Katie O'Brien, a Kenmore-raised neuropsychologist – were central to social media efforts that transformed Castro into an iconic figure in the Bills universe.

O'Brien, a cancer survivor who is president of the Bills Backers of Houston, started a GoFundMe account for Castro's family. Johnson and his buddies kicked off the Twitter campaign that eventually led the Bills to surprise Castro by allowing him to announce the team's third-round pick in 2018 at the National Football League draft in Arlington.

Through his own jubilant sincerity, Castro became the rarest of 21st century figures: In a time when the digital world thrives on division and conflict, he was a galvanizing figure who brought together a world even beyond Western New York. As a Twitter user called Fulano de Tal, an Army veteran from San Diego, put it early Wednesday: "Well, I awoke with a heavy heart for a man I never met but whose spirit I felt."

A few weeks ago, Buffalo News photographer James P. McCoy and I went to Texas and spent a few days with Castro at the MD Anderson Cancer Center. We wanted to answer a question Castro himself, in his humility, would sometimes ask:

In a world where many Bills fans quietly face cancer and other devastating problems, what was it about this tale that spoke so deeply not only to Buffalo – a Northern city that had endured its own struggles, far from Texas – but to countless thousands beyond our community, all moved by this journey?

Johnson, a software engineer from Rochester, has organized a tailgate party at more than 400 consecutive Bills games. Every week, in the fabled Hammer lot near New Era Field, he sets up with his ancient red Pinto and goes through a mad ritual that builds into Pinto Ron – a pseudonym that is a story unto itself – ending up totally drenched in ketchup.

He offers his own theory on why Castro, who did not drink or smoke, rose into legend. Pancho Billa was drawn to the manic energy of the Hammer lot, becoming close friends with such stalwarts as Captain Buffalo, a costumed guy in a Flintstones-style buffalo hat, and Joanie DeKoker, a retired Syracuse pharmacist known within the #BillsMafia as “Mama K.”

Castro’s costume, simple at the start, grew far more elaborate, an ensemble that delighted children and fired up the fans. To save a little money, Johnson and Castro often roomed with Captain Buffalo in tiny hotel rooms at road games. It was during quiet late-night conversations in those look-alike hotels – someone usually stretched out on the floor – that Johnson began understanding what made Castro so beloved.

“I knew Ezra before the costume, and it wasn’t something different than who he was,” Johnson said. “It was an extension of his personality. I think what happened is that at every game, Ezra would meet 20 or 30 or 40 people, and they’d realize he wasn’t a showboat, that he’s a good guy, that he’s all about being a passionate Bills fan.

“That happens game after game after game, and he meets more and more people, and no one ever has anything bad to say about him, and then people are starting to recognize him and he’s getting all these positive reviews.”

In the middle of this escalating celebrity, his arm aching from what he assumed was a pulled muscle, the doctors stunned Castro by telling him he had stage four cancer. Throughout the nation, the #BillsMafia turned its focus to the difficulties faced by Castro, his longtime partner, Veronica Borjon, and their two young children, Gino and Lourdes.

Johnson, who spoke by phone with Castro in recent months almost every day, flew to Dallas last week to visit his friend. He sat at his bedside just before the vigil situation that ended Tuesday, with Castro's passing. Johnson spoke with admiration of how Castro refused to go on disability during his illness, how he worked until he absolutely could not work anymore, how the guy found happiness – above all else – in being around people.

In Dallas, in conversations Johnson finds no need to repeat, he and Castro told each other what they needed to say.

That memory reminded me of an evening a few weeks earlier, when McCoy and I sat in a Houston hospital room with Castro and Captain Buffalo. In going there, Castro hoped an experimental therapy would buy him extra time, but it was clear – through the quiet response of every doctor who came into the room – that extra time was not going to be.

Look, Castro told us, with typical optimism. He was praying, and he still intended to be around for a long time. But if, just if, that did not come to be, he wanted the people of Buffalo to understand a few things. For that reason, he sent a  message to our city, a video made from his hospital bed that McCoy waited to post until after Castro's death.

“It just makes me feel good," Castro said, "that ... there are people out there, again, who are accepting me, a guy from El Paso, with no relationship to New York at all, and it just really truly means the world that people are out there like that. I’m not surprised in Buffalo, to be honest. I knew it all along, as I was growing up, how well this city was with each other's people, and it's just, I'm not surprised from Buffalo.

He did not see, which was his beauty, how much we are in his debt.

"Pinto Ron," whose real name is Ken Johnson, with his close friend, the late Ezra Castro. While Castro earned fame as the costumed Pancho Billa, Johnson sees him first without the mask. (Image courtesy of Ken Johnson)