Seahawks vs. WFT: Updates and scores from MNF

Lot 7 nuptials: Couple gets married in Bills tailgate lot where they met three years ago
0 comments
Share this
Support this work for $1 a month
Ben Tsujimoto

Cathy Maunz and Steve MacWilliams tied the bow on a romantic story tinged with Zubaz.

The couple got married Sunday morning during a ceremony in Lot 7 of Highmark Stadium before the Buffalo Bills took on the Indianapolis Colts.

The nuptials came about three years after Maunz and MacWilliams first met in the same parking lot before Thurman Thomas' Wall of Fame induction ceremony on Monday Night Football, Oct. 29, 2018. A return to the beginning was only fitting.

"We decided two weeks ago to get married this weekend at the tailgate exactly where we met," said Cathy, who lives outside Pittsburgh, with Steve. "We’ve talked about it for two years and decided not to wait anymore."

The visuals were captured by Cathy's friend, Lora Ormsbee, a lifelong Bills fan and season ticket holder from Erie, Pa.

In Ormsbee's photos, it's evident the couple came prepared to show off their fandom: MacWilliams, a native of Canandaigua, donned an eye-catching red-and-blue Bills blazer, blue Bills sneakers and a Bills tie. Cathy, who's from Mount Jackson, Pa., matched with a red dress.

Bill Hatch, known as the Bills Stormtrooper, escorted Maunz down the "aisle," catching the attention of some nearby tailgating fans.

A wedding at a @BuffaloBills tailgate is so Bills-esque. #BillsMafia pic.twitter.com/v6Uf8UQBjF

Naturally, vows were recited under a blue-and-red Bills tent, as the pair was surrounded by family and friends all dressed in Bills gear.

Inside the game, the newlywed couple posed for a photo with former Bills running back Marshawn Lynch, a cool moment on a memorable, if unorthodox wedding day.

"It was a beautiful wedding," Ormsbee said.

It doesn’t matter if their team is winning or losing, when the Bills go on the road, the Bills Mafia goes along for the ride. For one couple, that means Super Bowl or bust.

For Bills fan, a walk down the aisle, then a run out the stadium tunnel

Tony Mastrangelo is a Buffalo native who has been a Bills fan for 20 years, going to games, watching every Sunday and loving football. For a w…

Rochester couple will have 70,000 Bills fans as guests at halftime wedding ceremony

Talk about a shotgun wedding. Sorry, we couldn’t resist. As part of its 100th-year celebration, the NFL challenged each of its 32 teams to come up with a once-in-a-lifetime experience for fans. The Buffalo Bills’ idea involved a wedding at New Era Field … during halftime of a game. Seriously. That wedding will take place Sunday, when Rochester couple

Seen and heard around Ralph Wilson Stadium before Bills-Patriots… Opponents for a day, partners for life: Meet Stacy and Rich Mount, a Bills fan and a Patriots fan who said “I Do” while tailgating in the parking lot before Sunday’s clash of AFC East rivals. The Rochester natives planned their wedding specifically for Sunday’s game. They read their vows in the bus

Thurman Thomas’ number became the third to be retired in franchise history, joining Jim Kelly’s No. 12 and Bruce Smith’s No. 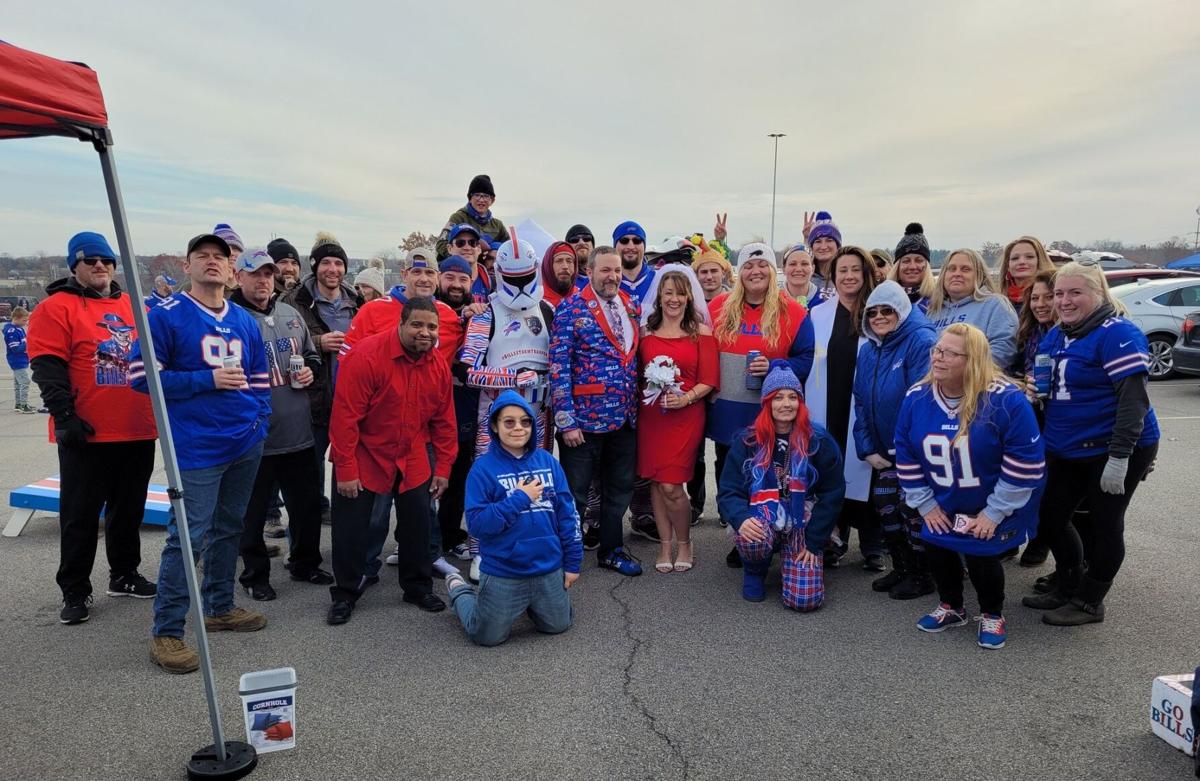 A photo of the bridal party for Cathy Maunz and Steve MacWilliams in Lot 7 at Highmark Stadium in Orchard Park on Nov. 21, 2021. 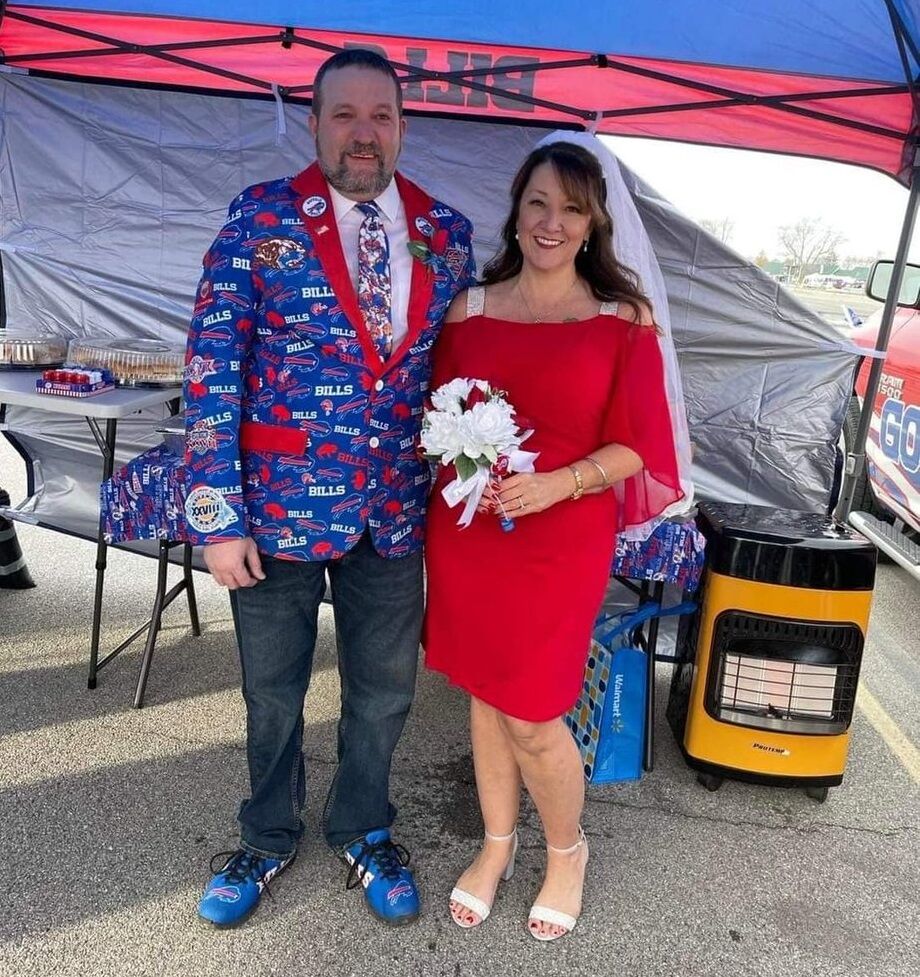 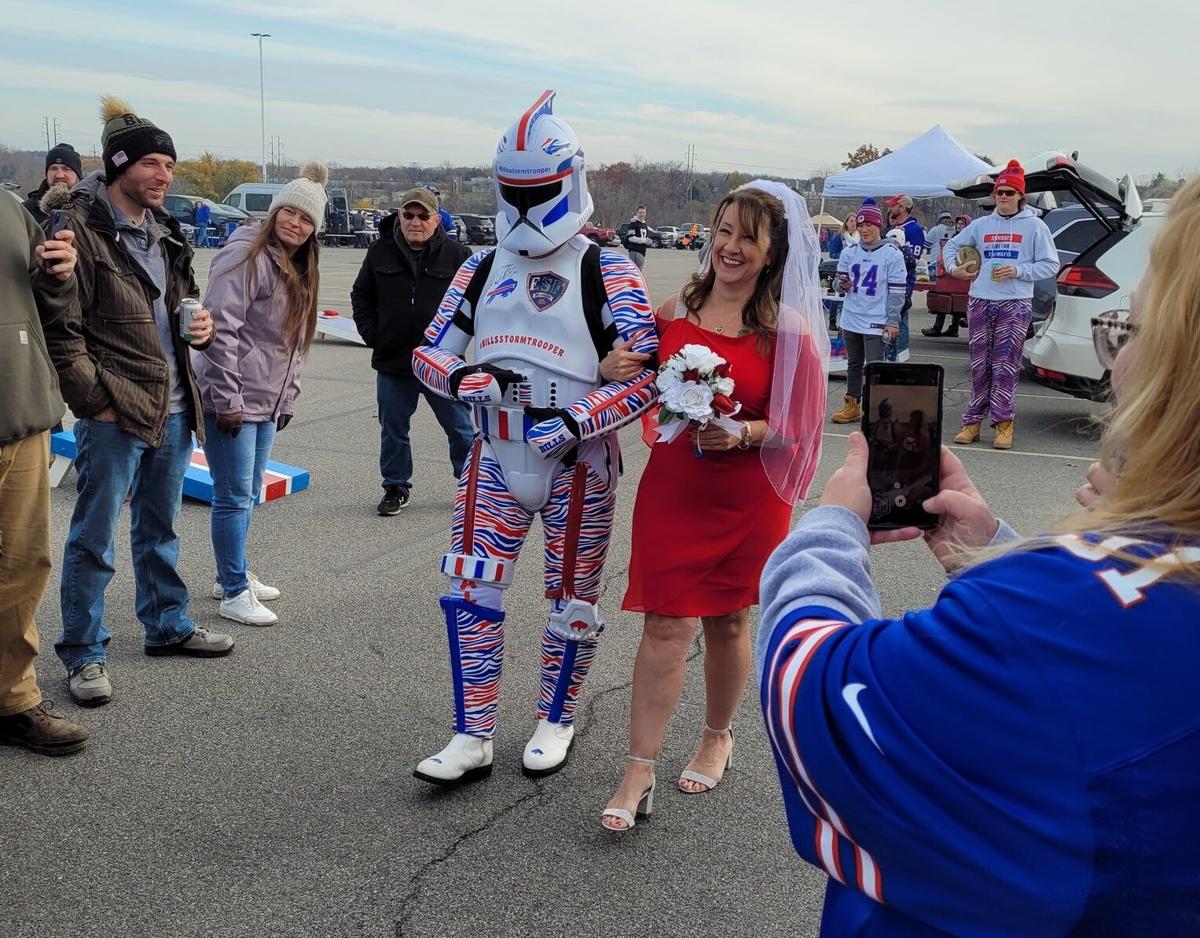